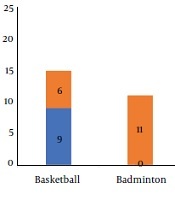 Student-athletes who are still experiencing physical and psychological growth and developmentally immature are prone to getting sports injuries. Landing Error Scoring System (LESS) is a screening tool to assess the risk of injury to determine the movement error of jumping and landing.

The purpose of this study was to find the scientific evidence regarding the role of LESS concerning lower extremity injuries.

The average of 16-year-old participants with boys more than girls (60.9%). LESS result, gender and body posture alignment did not show a significant association with lower extremity injuries (P > 0.05). History of previous injuries in the last six months and duration of training less than five years had a significant relationship with lower extremity injuries (P < 0.01 and P < 0.05).

There has been increased participation in exercise or sport by young people in Indonesia nowadays. It can reduce stress, prevents several chronic diseases, improves health-related fitness, the quality of sleep, and self-confidence significantly (1). However, participation in exercise or sport can also increase the risk of sports injury (2). According to the National Institute of Arthritis and Musculoskeletal and Skin Diseases, musculoskeletal injuries were the most common reason for injury-related visits to primary care physicians (3).

Several factors can cause sports-musculoskeletal injuries for young people. Young people's bodies are still in the growing phase (because of an epiphysial plate on their bones), which are prone to injury. Psychological immaturity in youth also contributes to increasing the risk of musculoskeletal injuries (2, 4). Young athletes in Pusat Pelatihan Olahraga Pelajar DKI Jakarta (PPOP) train almost every day for several hours, which makes them vulnerable to becoming injured. Habelt et al. (2011) reported that 4468 athletes aged between 10-19 years old were treated for sports-related musculoskeletal injuries, and the lower extremity was involved in 68.71% of the cases (5).

Clinical assessment tools are needed to identify the problems in the musculoskeletal system that may lead to injury. The landing error scoring system (LESS) is a valid and reliable clinical assessment tool that can identify individuals who are at high risk of injury by evaluating changes in the jump-landing technique (6, 7). According to the author's knowledge, there is no research study about the relationship between LESS and lower extremity injury on the young athlete population in Indonesia.

The present study aims to know and find the relationship between LESS and lower extremity injuries on young athletes in Indonesia.

Eighty-seven healthy youth athletes (53 boys, 29 girls, aged 13 - 17 years) from six sports divisions (badminton, indoor volleyball, beach volleyball, basketball, sepak takraw, and soccer) were recruited. The study participants came from a cluster sample. All participants were trained at least five days per week. Participants with illnesses or musculoskeletal injury at the time of testing were excluded from this study.

The study protocol and design were approved by the ethics committee of the faculty of medicine, Universitas Indonesia. A cross-sectional study was conducted in July 2019 for this study. Before the test, the researcher explained all test procedures and the risk of the test to the participants. All participants made history taking and general physical examination by a researcher or assistant. The significant components of history-taking were age, gender, sports division, duration of the training, and history of the previous injury. Vital sign, body weight, and body fat percentages were measured using bioelectrical impedance analysis (Omron HBF-375 Karada Scan Body Composition Monitor). The postural alignment was observed and recorded using the postural grid from the Android mobile application (ACPP Core 2). All the participants did the jump-landing task using a landing error scoring system. The researcher would follow up with the participants about three months looking for lower extremity injury.

Participants were instructed to jump forward from a 30-cm box to a distance of 50% of their height away from the box and land with both feet. After landing, they should rebound for a maximal vertical jump. Participants were given two practice trials and one test trial. One DSLR camera (Fuji Film XA-3) was placed anteriorly, and one video camera (Sony H.D.) was placed laterally to capture both frontal and sagittal views of the jump-landing task. There are 17 items with a total score of 19. The final LESS score is calculated by totaling the number of errors observed by the researcher. A cut-off of 5 for the LESS score was used to determine whether the participant had a good jump-landing movement (LESS < 5) or a poor (LESS ≥ 5) score.

Nonparametric methods were applied for most of the variables (except age) because of the abnormal distribution as assessed by the Kolmogorov Smirnov test. Comparisons between several participant characteristics (gender, postural alignment, duration of the training, history of the previous injury, LESS score), and lower extremity injury were analyzed using the chi-square and Fisher test. Logistic regression in multivariate analysis was used to examine the relationship between several participant characteristics and lower extremity injury, which had a significant result (P < 0.05). Data analysis was performed using SPSS version 20.0 (IBM Corporation, Armonk, NY, USA).

Figure 1. Distribution of lower extremity injuries according to sports divisions

According to the assessment of several participant characteristics, duration of training, and history of previous injuries were two components that had a significant association to lower extremity injures, and they were included in multivariate analysis. The results show that the history of previous injuries has a stronger relationship, which means had a more significant risk for getting lower extremity injuries at participants in this study (Table 4).

The proportion of lower extremity injuries in boys did not differ significantly from girls. Baumhauer et al. (1995) also found no differences in the number of ankle sprain injuries in soccer, lacrosse, and hockey between both genders (7).

Soccer athletes often make a sprint to catch or dribble the ball. Thigh injury may occur in the phase of the late swing and late stance due to excessive eccentric contraction on the hamstring (12). The six sports divisions mostly involved jump-landing movement. The ankle is a joint where the lower leg and foot meet, receive an enormous body burden and have thin ligaments in maintaining the stability of the ankle joint. Plantarflexion and inversion during landing caused overstretching of the anterior talofibular ligament (ATFL), causing the lateral ankle sprains (13).

Padua et al. demonstrated that LESS has good validity, inter-rater, and intrarater reliability in assessing an individual jump-landing movement (6). Mechanical movement jump-landing with a cut-off score of LESS ≥ 5 (motion-jump landing unfavorable) will increase the burden on lower extremity joints so that the risk of injury, especially anterior cruciate ligament (ACL) injury increased. Sagittal plane motion stiffness during landing (less degree of trunk, hip or knee flexion), excessive hip adduction, excessive movement of the frontal plane (knee valgus), or an increase in hip and knee rotation are the example of abnormal landing movement techniques (16). In contrast with the study above, the results of this study indicate that the LESS score did not have a significant association with lower extremity injury. Differences found in this study are caused by differences in injury definitions used compared to previous studies. Differences in the sports division, levels of competition, or environmental factors (temperature and humidity) observed between the studies may also give different results.

The duration of training had a significant association with lower extremity injuries (P < 0.05). Lower extremity injuries occur mostly in participants who trained ≤ five years. One prospective cohort study by van Beijsterveldt et al. compared the incidence and characteristics of the injured amateur and professional soccer athletes for one season (2009 - 2010) in the Netherlands. The study found that as many as 274 of 456 (60.1%) amateur soccer athletes and 136 of 217 (62.7%) professional soccer athletes got sports injuries. Professional athletes tend to experience mild injuries, while amateur athletes tend to experience moderate to severe injuries (P < 0.001) (17). The tendency of sports injuries is more common in untrained subjects, which can be caused by a tendency of lack of experience in dealing with the game situation, including the participant's psychology, who is still immature. However, this result was not consistent with studies conducted by Hersero et al. (2014) and Hammes et al. (2015), who found that the incidence of injuries in amateur athletes is lower than professional athletes (18). Professional athletes who have been training for a long time have more exposure to the risk of injury that causes sports injuries to a higher amount than amateur athletes. Post et al. (2017), in a case-control study, suggested that athletes who trained and competed in the single-specialization sport for more than eight months of the year tend to be 1.66 times more likely to report lower extremity overuse injuries than athletes who trained below eight months (P = 0.001). Besides, athletes who participated in the single-specialization sport for more hours per week than their age (i.e., a 16-year-old athlete who participated in his or her primary sport for more than 16 h/wk) were more likely to report an injury of any type (P = 0.001) (19). These inconsistent results of the studies require further research.