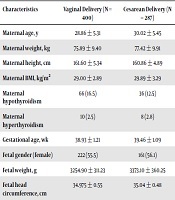 This study aimed to evaluate the feasibility of using a computerized machine to predict a successful normal vaginal delivery and determine the antepartum factors involved in failed labor induction in nulliparous term women.

This prospective cohort study was conducted in Yas Hospital affiliated with Tehran University of Medical Sciences from 2017 to 2019. The data used for the computerized system were obtained during the admission of the term nulliparous women with singleton pregnancy in cephalic presentation. The cesarean delivery rate, as well as maternal and perinatal outcomes, were evaluated. The input variables were maternal age, gravida, gestational age at birth, necessity and type of labor induction, presentation of the baby at birth, Bishop Score, fetal weight, and fetal head circumference, and maternal disorders. The outputs were vaginal deliveries or cesarean sections.

The result of this study may be beneficial for healthcare providers to predict the delivery route, the risk of labor induction failure and make a personal decision according to each individual.

The rate of cesarean section is progressively increasing despite the associated risk (1). Furthermore, cesarean delivery after labor induction in women with planed normal vaginal delivery may increase maternal morbidity and mortality (2). Labor induction is defined as artificially stimulating uterine contractions with the aim of achieving vaginal delivery (3). Labor induction is performed by a variety of methods, including chemicals such as oxytocin, prostaglandin E analogues (e.g., misoprostol), or mechanical such as Foley catheter, membrane stripping, and amniotomy (4). Some of the common indications for labor induction include post-term pregnancy, prelabor rupture of membranes (PROM), oligohydramnios, fetal demise, gestational hypertension, and diabetes (5, 6). Although it is rare, labor induction might have several complications such as uterine rupture, postpartum hemorrhage, cord prolapse, and fetal compromise (7, 8). Failed labor induction, although not in all cases, may lead to emergency cesarean delivery (9).

Given that the method of delivery in obstetrics is still a challenge and considering the complications following labor induction failure and the risk of emergency cesarean delivery, especially in nulliparous women and also the women's concern whether to have vaginal delivery or cesarean, we decided to investigate the factors associated with failed labor induction with a computerized system.

This prospective study was conducted at an educational hospital affiliated with Tehran University of Medical Sciences (TUMS), Tehran, Iran, from April 2017 to April 2019. This study was approved by TUMS Ethics Committee and conducted according to the declaration of Helsinki. All participants signed the written informed consent, and their identities remained confidential.

All term nulliparous women in the latent phase of labor with singleton pregnancy and cephalic presentation referred to the hospital were recruited. The participants with any contraindications for vaginal delivery and/or labor induction (4) such as placenta previa, non-cephalic presentation, cord prolapse, active herpes genitalis, macrosomia (> 4500 g), non-reassuring fetal status, and previous myomectomy were excluded from the study.

The process of calculating a score was dependent on identifying different variables and rating them. Multiple logistic regressions were performed to find out the variables that are associated with the route of delivery. All participants underwent general and obstetrical examinations. Demographic characteristics such as maternal age, weight, height, and body mass index (BMI) were measured. Cervical dilation, cervical effacement, and fetal station were assessed, and a maximum modified Bishop Score was calculated for each participant. Fetal gender, weight, head circumference, and head position were determined prenatally using ultrasound.

The main agent used for labor induction for cervical ripening in the latent phase was 50 mcg of oral misoprostol (based on the hospital protocol) each 3 to 6 hours until a maximum of six doses. Oxytocin was administered if the participant failed to achieve active labor within eight hours after administration of the maximum dose of misoprostol. Oxytocin was used by intravenous infusion of 10 IU/mL, starting from 4 to 8 drops per minute and increased by four drops per 15 minutes until a maximum of 64 drops. The participants with contraindication to prostaglandins or prostaglandin analogues were treated with oxytocin alone using the aforementioned protocol. In addition to these drug protocols, a uterus Foley catheter filled with 30 mL normal saline was injected into the cervix in the cases with low Bishop score.

Failed labor induction was defined as either active phase arrest (due to arrest of dilation or arrest of descent) or prolonged latent phase (participant remaining in latent phase for more than 20 hours and not achieving active phase (cervical dilation of 4 - 6 centimeters) despite subsequent amniotomy (after 12 hours) and administration of oxytocin). Cesarean delivery was performed to terminate pregnancy in participants with failed labor induction or fetal distress in any stages.

The data were analyzed using SPSS version 25 (Armonk, NY: IBM Corp). A P-value of less than 0.05 was considered statistically significant, and confidence intervals were calculated at 95%. We used mean and standard deviation (mean ± SD) to describe continuous variables, frequency, and percentage to describe categorical variables. Univariate logistic regression was used to identify the effect of each variable on induction outcome. A backward elimination multivariate logistic regression model was used to identify the final factors involved in the failure of induction. In case of related variables, if both the initial variables and the derived variable were eligible to enter the multivariate analysis, only the derived variable was used.

Table 1. The Demographic and Obstetrical Information of the Participantsa

The median Bishop score was 1 (IQR = 1, 2). The modified Bishop score and its components, categorized by labor induction outcome, are shown in Table 2.

Table 2. Components of Bishop Score of the Participants

Cesarean delivery was performed in 287 participants (41.8%) due to labor induction failure. Moreover, 261 (90.94%) of these participants were diagnosed with active phase arrest due to arrest of dilation (206 (71.78%)) or arrest of descent (55 (19.16%)), and 26 (9.06%) cases remained in the latent phase for more than 20 hours and did not achieve active phase despite subsequent amniotomy and administration of oxytocin.

In this study, we tried to develop a computerized scoring machine that could predict the possibility of vaginal delivery in a nulliparous woman with the help of physical characteristics, obstetric and non-obstetric characteristics. We tried to present a comprehensive method by including most of the relevant factors discussed in the literature in the initial model. Cervical length was included in some older studies, but was shown to be ineffective when validating those studies (17) and in a systematic review by Hatfield et al. (10), and therefore, was not included in our study. A distinctive feature of our study is that we omitted postpartum factors because these factors are not known before birth and, therefore, cannot be used as a predictive factor beforehand. Most importantly, we used fetal weight at birth determined by ultrasound instead of birthweight because we consider birthweight as a postpartum factor only determined after birth. The same approach was used for fetal head circumference.

As for the different labor induction methods, numerous studies have been conducted with varying results, the full description of which is beyond the scope of this article. Each method has its pros and cons, which are discussed in detail in related systematic reviews (19, 20). The condition of the participant should be considered in choosing the appropriate method of labor induction, as there is no universal agreement about the superior method at the moment (21). In a real-life clinical setting, it is nearly inevitable to use different methods of induction because unique characteristics and conditions of each participant require a different approach.

This is not the first of such studies. Other studies have been conducted to investigate the factors affecting labor induction outcome in different populations. As far as we know, there are only two other studies that investigate factors affecting labor induction outcome in Asian women. These studies were conducted in Japan (11) and Saudi Arabia (22). The importance of such investigations lies in the effect of race and ethnicity on the outcome of labor induction (13, 14). For instance, our relatively high rate of cesarean delivery may be attributed to ethnicity, as well as the low Bishop Score of our sample.

This was a prospective study, which limits error and yields more accurate data. We did a comprehensive measurement of most antepartum factors that are known to affect labor induction outcome. Nevertheless, our study is not without limitations. We studied only nulliparous women; therefore, our results cannot be generalized to all gravid women. It is possible that other factors (such as psychosocial and environmental factors, which were not measured) also affect the outcome of labor induction. The data were collected by different individuals, and labor inductions were done by different obstetricians, which might lead to bias. Different indications and different methods of induction might also lead to bias but were impossible to avoid in this study, as mentioned earlier. This was a single-center study. Different centers and different ethnicities may yield different results. Other studies are required to validate these results in different settings. We suggest a multicenter, multinational, prospective study involving both nulliparous and multiparous participants with the same indication and the same method of induction to obtain a homogeneous and highly accurate result. A systematic review and meta-analysis of the literature is also beneficial to evaluate the predictive value of different factors found in different studies.

The result of this study may be beneficial for healthcare providers to predict the delivery route, the risk of labor induction failure, and make a personal decision according to each individual.

This manuscript was extracted from a thesis by SHKH for fulfillment of clinical specialty on obstetrics and gynecology at Tehran University of Medical Sciences, Tehran, Iran. We thank the labor staff of Yas Hospital for their kind help.

Copyright © 2021, Fertility, Gynecology and Andrology. This is an open-access article distributed under the terms of the Creative Commons Attribution-NonCommercial 4.0 International License (http://creativecommons.org/licenses/by-nc/4.0/) which permits copy and redistribute the material just in noncommercial usages, provided the original work is properly cited.
download pdf 118.07 KB Get Permission (article level) Import into EndNote Import into BibTex
Number of Comments: 0