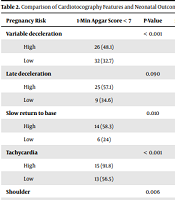 Fetal cardiac monitoring indications during labor and near delivery in high- and low-risk pregnancies and their effects on neonatal outcomes have been investigated in previous studies; however, the data of nonreassuring cardiotocography (CTG) near delivery on neonates are insufficient.

This retrospective cohort study was conducted on pregnant women candidates for vaginal delivery in an academic hospital within 2017 - 2020. The participants were divided according to maternal and fetal risk factors into two groups of low-risk and high-risk pregnancies (including preeclampsia/eclampsia, diabetes, placenta abruption, and intrauterine growth restriction). Three obstetricians, blinded to the participants and neonatal outcomes, reviewed the CTG tracing near delivery individually. The features of nonreassuring CTG 30 minutes before delivery, including variable deceleration, late deceleration, slow return to base, tachycardia, and shoulder and overshoot patterns, were detected in the traces. Then, the neonatal outcomes, including umbilical artery pH at birth, Apgar scores at the 1st and 5th minutes, and admission to the neonatal intensive care unit (NICU), were compared between the groups.

A high-risk pregnancy is any situation that has a potential risk for the mother or fetus (1). One in four women with risk factors of high-risk pregnancies is prone to maternal or neonatal complications; however, in those with low-risk pregnancies, it is only 10% (2). Regarding labor and delivery, optimizing maternal and neonatal outcomes is the most important obstetrical care milestone. The World Health Organization has developed the standards for the improvement of the quality of maternal and newborn care (3). Based on this guideline, labor induction by augmentation should be used only in the facilities capable of close, regular monitoring of the fetal heart rate (FHR) and the pattern of uterus contraction and can manage the adverse effects (3).

Hypoxia during labor might be due to the compression of the umbilical cord or decreased placental perfusion during the contraction of the uterus, which is evident in the late decelerations (4). These changes are identified by cardiotocography (CTG) that should be documented for at least 30 minutes before the administration of oxytocin. Continuous CTG is advised in the time that oxytocin is used up to delivery (5). With a nonreassuring CTG pattern, the midwife or obstetrician indicated urgent clinical assessment that is the first step in reducing or stopping the oxytocin administration (5).

Continuous electronic fetal monitoring during childbirth is challenging. However, healthy women without complications would be considered low-risk and can use intermittent auscultation. The indications for continuous monitoring are preeclampsia, suspected intrauterine fetal growth restriction, diabetes, and preterm labor (6). A routine admission CTG in clinical use, especially in low-risk pregnancy, increases unnecessary cesarean delivery without the improvement of neonatal outcomes (7).

The National Institute for Health and Care Excellence (NICE) (8) has categorized CTG into reassuring, nonreassuring, and abnormal forms. The initial management of nonreassuring features includes the modification of any underlying reasons, such as hypotension or uterine hyperstimulation (8). Monitoring indications in low-risk and high-risk pregnancies and their effects on neonatal outcomes have been investigated in previous studies; nevertheless, insufficient information on the differences in fetal distress with nonreassuring CTG has been investigated that is believed to help make decisions faster and reduce neonatal complications.

This study aimed to evaluate arterial cord blood gases, Apgar scores, and admission to the neonatal intensive care unit (NICU) in high-risk and low-risk pregnancies with nonreassuring CTG 30 minutes before delivery to see if high pregnancies need different or more care or not.

The inclusion criteria were singleton term pregnancy with nonreassuring CTG in the last 30 minutes before delivery. Patients whose fetuses or newborns had structural or genetic abnormality were excluded from the study. The women who were admitted for scheduled cesarean delivery, noncephalic presentation, and missed data of neonatal outcome were also excluded.

The participants were divided into high-risk and low-risk pregnancies. High-risk pregnancies were defined as preeclampsia (mild or severe), eclampsia, insulin-dependent diabetes, placenta abruption, oligohydramnios, intrauterine growth restriction, maternal fever due to chorioamnionitis, and preterm and postterm labors. All FHRs were recorded with an electronic fetal monitoring machine (EDAN, China). All tracings were reviewed by three obstetricians, who were blinded to neonatal outcomes. The results were checked, and any conflicts were solved by discussion. The demographic and obstetrical data and the different types of nonreassuring CTG were described in a questionnaire. The intraobserver and interobserver reliability of this questionnaire was higher than 90% and 85%, respectively.

Neonatal outcomes were deﬁned as umbilical cord pH < 7.1 at birth, Apgar score < 7 at the 1st and 5th minutes, and admission to the NICU. Immediately after delivery, the cord clamping was performed for all fetuses by an obstetrician resident. While the placenta was still in situ, the cord was double clamped at a minimum length of 10 cm, and the artery was sampled in 2 cc preheparinized syringes and analyzed within 10 minutes.

Categorical variables were presented as absolute frequencies and percentages. Proportions were compared using the chi-square test or Fisher’s exact test. Statistical analysis was carried out by SPSS software (version 20). A P-value less than 0.05 was considered statistically significant.

Among 622 patients who were included in the study, 322 women met the criteria for high-risk pregnancy, and the remaining 300 women were categorized as the low-risk group. Table 1 shows the demographic and delivery characteristics of the participants.

Table 1. Demographic, Obstetrical, and Delivery Characteristics of the Participants a

The neonatal outcomes, such as NICU admission, low Apgar scores in the 1st and 5th minutes, and pH < 7.1, were signiﬁcantly different between high-risk and low-risk mothers with variable deceleration, tachycardia, and overshoot pattern (Table 2). High- and low-risk pregnancies with late deceleration had only significantly different Apgar scores in the 5th minute (P = 0.048). In the slow return to base features, the Apgar scores in the 1st and 5th minutes and NICU admission were significantly different in high- and low-risk groups. Moreover, NICU admission and low Apgar score in the 1st minute were higher in high-risk women in shoulder patterns (Table 2). As observed in Table 2, All adverse neonatal outcomes were more common in high-risk mothers with variable deceleration, slow return to base patterns, and shoulder patterns, except pH < 7.1 at birth.

The results of the present study showed the existence of a signiﬁcant higher proportion of neonatal adverse outcomes in high-risk pregnancies using nonreassuring CTG. Other studies have shown that variable deceleration and tachycardia were associated with fetal acidosis and thereby might develop fetal asphyxia. In addition, Dellinger et al. showed normal tracings were only 5.1% of Apgar scores < 7 at the 1st minute and 1.0% of Apgar scores < 7 at the 5th minute (9). Only 5.6% of the neonates in this group were admitted to the NICU. None of the neonates in this group was considered hypoxic.

Another study evaluated the relationship between the time spent in each FHR category during the last 2 hours before delivery and short-term neonatal outcomes. The results showed an increased chance of adverse short-term outcomes with increasing time in category II FHR patterns (10). Wood et al. showed the association of fetal acidemia and depth of variable decelerations. They reported that deeper variable decelerations are attributed to less fetal pH (11).

The current study showed that the cases with shoulder patterns and slow return to base had a higher frequency of Apgar scores < 7 at the 1st and 5th minutes and NICU admission; nevertheless, the present analysis failed to demonstrate a relationship between the aforementioned two patterns and pH < 7.1. Similarly, Cahill et al., in a retrospective cohort study, indicated that there was no association between shoulder patterns and acidemia (12).

An important aspect of the current study is the comparison of neonatal outcomes and nonreassuring CTG regarding high-risk and low-risk pregnancies considering both mother’s condition and FHR tracing are vital for an appropriate decision to terminate the pregnancy. Another strength of the present study was the interpretation of FHR tracing by four independent obstetricians who were blinded to all clinical factors and outcome data.

There is a potential limitation in the current study. Part of the samples was related to retrospective recorded data that affected the precision of information. However, it was tried to conduct a supervised data collection. Despite this potential limitation, it is believed that the present study’s results contribute to the recent existing literature associating fetal heart monitoring type II with fetal acidemia and other birth outcomes in high-risk pregnancies.

Copyright © 2022, Fertility, Gynecology and Andrology. This is an open-access article distributed under the terms of the Creative Commons Attribution-NonCommercial 4.0 International License (http://creativecommons.org/licenses/by-nc/4.0/) which permits copy and redistribute the material just in noncommercial usages, provided the original work is properly cited.
download pdf 99.58 KB Get Permission (article level) Import into EndNote Import into BibTex
Number of Comments: 0