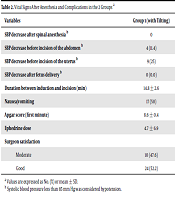 Manual Leftward Displacement of the Uterus in the Prevention of Maternal Hypotension During Cesarean Section: A Randomized Comparative Study

It is essential to maintain the hemodynamic state of mothers during delivery in cesarean section (CS). Research has shown that hypotension can be controlled by applying a 15° left lateral tilt. This can be achieved using an obstetric wedge or by tilting the operating table leftward. A systematic review of further research shows insufficient evidence to suggest whether it is effective or practical.

This study aims to evaluate the effectiveness of manual left tilting of the uterus on maintaining the hemodynamic status of mothers undergoing a CS delivery, where a spinal anesthetic has been given.

Seventy women who were candidates for CS deliveries were randomly assigned into 2 groups as follows: group 1, the anaesthesiologist manually maneuvered the mother’s uterus to the left shortly after spinal anesthesia; group 2, the mothers’ uteruses were not displaced to the left. Sixty-seven of 70 participants completed the study. The hemodynamic status of the mother was reported before, during, and after surgery. The total doses of inotropic-vasopressors used to maintain hemodynamic stability were recorded.

The mother’s age, vital signs, and body mass index (BMI) before pregnancy and near term were not significantly different. Mothers maintained a significantly higher systolic blood pressure (SBP) when the uterus was displaced to the left (group 1). The mothers also required less ephedrine. Mothers in group 2 suffered a greater decrease in their SBP both after induction and before incision of the abdomen (group 2, P < 0.05).

The manual tilting of the uterus to the left during CS is effective in maintaining blood pressure and decreases the need for vasopressors.

The rate of cesarean section (CS) has increased in recent years. This increase is caused by repeated CSs, slow progress in labor, and CSs in non-cephalic fetal presentation. Spinal anesthesia is preferred due to the lower risk of fetal depression, requiring low dose, rapid onset of action, and simple procedure (1, 2). Newborn babies have better outcomes when the mothers’ have been given regional anesthesia compared to general anesthesia (3).

Other studies have used hydration with colloids or crystalloids to reduce postspinal hypotension during CS. None of them is the best practice as there is a risk of anaphylaxis, blood clotting, nephrotoxicity, and fluid overload for the mother from the colloid solution. Also, the crystalloid has a too short half-life (8-10).

Applying a 15° left lateral tilt using an obstetric wedge or by tilting the operating table to the left is found to be effective in preventing or controlling maternal hypotension in some studies (11). Reviewing different research studies shows that there is no consensus on which treatment is best to be used in CS (12, 13). There are reports about the effectiveness of manual displacement of the uterus in preventing or treating hypotension in the gravid uterus (4).

Due to the lack of consensus on what is the most effective treatment of maternal hypotension during CS following spinal anesthesia, this study was conducted to evaluate the effectiveness of the manual tilting of the uterus to the left by an anesthesiologist.

Seventy women were enrolled in this randomized clinical trial conducted from August 2019 to May 2020 at Yas Hospital affiliated with Tehran University of Medical Sciences.

All participants were fully informed of the purposes of the study. Their understanding was checked, and informed consent was obtained before enrollment. The study was approved by the Local Ethics Committee of Tehran University of Medical Sciences (code: IR.TUMS.MEDICINE.REC.1397.358) and registered on the Iranian Registry of Clinical Trials website (code: IRCT20190130042559N1).

A specialist nurse used a simple randomization process to assign 70 women into 2 groups.

In group 1, the uterus was moved to the left manually by a qualified and competent anesthesiologist. This was undertaken shortly after induction with spinal anesthesia and while the patient was in the supine position. Standard operating procedures and guidelines were followed at all times. Infection prevention and aseptic techniques were used. There were no adverse events. The procedure involved the anesthesiologist placing his hand on the highest border of the uterus until the baby was delivered. In group 2, no uterus displacement was performed during CS.

The standard procedure followed for all included cardiorespiratory monitoring, such as non-invasive electrocardiogram (ECG), blood pressure (BP), pulse rate, and pulse oximetry (SpO2). The women were cannulated using an 18-gauge IV line before having ondansetron (4 mg), and Ringer’s lactate solution (500 mL) was administered 15 to 20 minutes before the spinal anesthesia. Oxygen was administered using a face mask delivered a flow rate of 5 L/min. The spinal anesthesia was administered between L4-L5 using a 27-gauge Quincke tip spinal needle in the sitting position. Also, 12.5 mg of bupivacaine (5%) was given.

SPSS version 22 (SPSS Inc, Chicago, Ill, USA) was used to analyze all data. Data were represented as the mean ± SD for continuous data and as a frequency for categorical variables. The independent samples t-test and Fisher exact test were used to compare quantitative and qualitative variables. Repeated measure analysis of variance (ANOVA) was also applied. P values less than 0.05 were considered significant.

The mothers had similar vital signs and were similar in age, body mass index (BMI) before pregnancy, and BMI near term (Table 1).

Table 1. Independent Observations of Women in Groups 1 and 2 a

b Before spinal anesthesia.

SBP right after spinal anesthesia and before the abdominal incision was significantly higher in group 1, who had the uterus tilted to the left (P < 0.05). After the delivery of the baby, there were no significant hypotension episodes in both groups. The repeated measurement of ANOVA showed a statistically significant effect on SBP (P < 0.05). There was no statistical difference regarding pulse rates in both groups (P > 0.05). Group 1 had a lower mean total of ephedrine. There was no significant difference related to the satisfaction level of the surgeon, nausea and vomiting in mothers, or the Apgar score of the baby, or the spinal anesthesia to uterus incision interval time between the 2 groups (Table 2).

Table 2. Vital Signs After Anesthesia and Complications in the 2 Groups a

This study showed that the manual displacement of the uterus to the left during CS was effective in controlling hypotension under spinal anesthesia. These results in our study are in agreement with the results of Kundra et al.; they randomly assigned 90 CS candidates into 2 groups: group 1 receiving 15° left lateral table tilt and group 2 leftward manual displacement of the uterus. The incidence of hypotension was 40% in group 1 and 4.4% in group 2. To note that in both Kundra et al. and our study, the manual displacement of the uterus to the left was undertaken. However, our second group was a true control group, as no further intervention was undertaken for the women who remained in the supine position (4), whereas Kundra et al. administered a different procedure to move the uterus (ie, tilting the operating table).

In our study, fewer mothers had a decrease in SBP where the uterus was tilted (4 vs 14 in the intervention group vs control group; P = 0.01). The need for ephedrine was also significantly lower in group 1 than in group 2. In the study by Kundra et al., the mean dose of ephedrine needed in their group 1 (15° left lateral table tilt) was 6 mg, while it was 11.3 mg in their group 2 (leftward manual displacement––our group 1) (4). There are other ways to reduce the risk of hypotension during CS, one of which is the left-tilting of the table.

Hasanin et al. studied 105 full-term pregnant women and recorded their vital signs in supine 15° and 30° left lateral positions. This was recorded before and after anesthesia and after the delivery of the baby. They found that left lateral tilting (either 15° or 30°) was associated with an increase in cardiac output, heart rate, and mean arterial pressure (16).

Rees et al. randomly assigned women who were candidates for CS into 2 groups: 15° left table tilt position and full left lateral position. They reported a higher SBP in the legs of women in their group 2 (17).

Clark et al. administered crystalloid pre-load and left uterine displacement; they found hypotension in 50% of the enrolled cases. They recommended left uterus displacement, plus crystalloid administration as an additive (18). In this study, an identical optimum dose of bupivacaine (12.5 mg) was used in the 2 groups, which could explain the low rate of hypotension in our study (19). Despite difficulties regarding left tilting of the uterus, it can be achieved through good communication, practice, and teamwork between the Surgeon and anesthesiologist.

This study has some limitations. First, we did not differentiate between aortocaval compression (which could be corrected by manual uterus tilting) and spinal anesthesia-induced sympathetic block, which logically could not be responsive to uterus tilting. Second, the difference in the level of pressure applied to the uterus may affect the effectiveness of the uterus tilting maneuver. Finally, the difference in body physique may have an influence on the overall outcome and effectiveness of the procedure.

Manual tilting of the uterus during CS by an anesthesiologist was effective in maintaining SBP, meaning that decreasing the need for vasopressors. Further studies are needed to further investigate the degree of pressure applied as part of the manual tilt of the uterus and the difference in the physical structure of the female anatomy, and efficacy of the maneuver.

Copyright © 2022, Fertility, Gynecology and Andrology. This is an open-access article distributed under the terms of the Creative Commons Attribution-NonCommercial 4.0 International License (http://creativecommons.org/licenses/by-nc/4.0/) which permits copy and redistribute the material just in noncommercial usages, provided the original work is properly cited.
download pdf 111.47 KB Get Permission (article level) Import into EndNote Import into BibTex
Number of Comments: 0