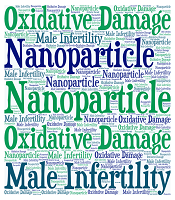 The Antioxidant Effect of Diamond Nanoparticles on Testicular Tissue

In Iran, the prevalence of infertility is 20.3%, which is higher than the global average (12% - 15%). Male factors are involved in more than 40% of infertility cases. Despite extensive research on male infertility, the etiologies are unknown in 30% - 60%, which may be due to various causes, such as environmental pollution, oxygen free radicals, and genetic and epigenetic abnormalities (1).

Evidence suggests that damage to sperm due to reactive oxygen species (ROS) is a major cause of infertility in men, leading to sperm dysfunction. A chronic or excessive increase of free radicals has a detrimental effect on the physiological function of cells and causes irreversible changes in the structure of biological macromolecules.

Damage to macromolecules in the cell includes DNA strand breakage, peroxidation of cell membrane lipids, and damage to membrane transporter proteins and intracellular enzymes (2). Spermatozoa, in particular, are prone to oxidative stress (OS) damage due to their high levels of unsaturated fatty acids and low content of antioxidant enzymes in the cytoplasm (3). In general, OS is an imbalance between the production of free radicals and the cellular antioxidant defense system in favor of free radicals, which causes oxidative damage, activation of signal pathways, and peroxidation of macromolecules in the cell. In addition, it ultimately leads to secondary effects on cell function and the progression of pathological conditions (3).

Among environmental factors, nanoparticles have a special place and can interfere with the normal function of tissues and organs. By passing from microparticles to nanoparticles, we encounter changes in some physical properties, increasing the ratio of surface area to volume, which gradually occurs with decreasing particle size and changing the behavior of atoms on the particle surface to the behavior of internal atoms. This phenomenon affects the physical and chemical properties of the particles and allows them to act as high-performance catalysts (4).

The small size and high surface area of nanoparticles increase their chemical activity. This increase in chemical and physical activities in many nanoparticles has led to their widespread use in processes such as drug delivery, vaccination, diagnosis or treatment of a variety of diseases, tissue regeneration, immunoassay, elimination of biofluid poisoning, heat treatment of cancer cells, and dental alloys, bladder catheters, etc. (5). According to experts, nanoparticles enter the human body through the mouth and nose, penetrate body tissues, and then damage cells through ROS, changes in cytokines, and the production of free radicals (6).

Xia et al. showed that nanoparticles with high production of ROS overcome the cell antioxidant system and increase OS and apoptosis by reducing mitochondrial function (7). Ghoshcian et al. investigated the effects of nanoparticles on the expression of BCL2 and BAX genes in the hippocampus of rats. The results showed that nanoparticles by decreasing BCL2 and increasing BAX caused instability of the mitochondrial membrane, increased the release of cytochrome c, and thus led to increased apoptosis (8).

Based on our studies, treatment with diamond nanoparticles at LD50 in rats with testicular reperfusion ischemia improved cell damage and led to cell death from necrosis to apoptosis, but in normal rats, this treatment had the opposite effect and caused cellular damage and increased necrosis, indicating the dual role of nanoparticles according to cell type.

Orazizadeh et al. showed that co-administration of beta-carotene and titanium improved spermatogenesis and that beta-carotene had a strong protective effect against testicular toxicity and could be clinically beneficial (13).

In recent years, the synthesis of green nanoparticles by plants has attracted much attention and can be considered as an alternative to chemical methods for the synthesis of nanoparticles (14). Studies have shown that silver ions dramatically increase ROS production, including the radical superoxide anion, and cause OS in cells. Plants have antioxidant activity due to their secondary metabolites (such as phenol and flavonoids) and can prevent oxidative damage to cells. Thus, plants have the potential to biodegrade ions and produce nanoparticles with antioxidant properties. Therefore, the biosynthesis of nanoparticles and antioxidants through plants as a biocompatible method is very useful and has been considered by researchers (15). Rahimi-Kalateh-Shah-Mohammad et al. showed that zinc oxide nanoparticles synthesized by a green method have antioxidant properties and are able to inhibit the growth of cancer cells (16).

In conclusion, concomitant use of coenzyme Q10 with diamond nanoparticles improves sperm parameters and reduces apoptosis, which can be attributed to the antioxidant properties and inhibition of the OS pathways of coenzyme Q10; thus, due to the dual role of nanoparticles in the reproductive system, it is recommended. In the group of infertile patients, antioxidants should be used to improve the damaged pathways.

Copyright © 2022, Fertility, Gynecology and Andrology. This is an open-access article distributed under the terms of the Creative Commons Attribution-NonCommercial 4.0 International License (http://creativecommons.org/licenses/by-nc/4.0/) which permits copy and redistribute the material just in noncommercial usages, provided the original work is properly cited.
download pdf 86.27 KB Get Permission (article level) Import into EndNote Import into BibTex
Number of Comments: 0