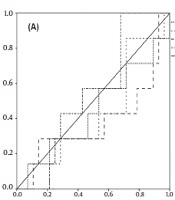 The applicability of non-invasive markers for predicting hepatic fibrosis in the pediatric population with chronic liver abnormalities is unclear.

This was a double-center study in Amir-Almomenin Hospital of Zabol and Namazi Hospital of Shiraz (2015 - 2017). Liver fibrosis was confirmed by biopsy examination. AST to platelet ratio (APRI), AST to ALT ratio (AAR), and Fibrosis-4 (FIB-4) were evaluated.

APRI, FIB-4, and AAR can be regarded as useful markers in predicting fibrotic transformation in children with various etiologies of chronic hepatitis.

Liver fibrosis results from the accumulation of extracellular matrix proteins such as collagen in the liver tissue. This condition can then lead to portal hypertension and serious liver diseases that may need liver transplantation (1, 2). The gold standard diagnostic for liver fibrosis is the histological examination; however, this is an invasive method, especially in children (3, 4). Accordingly, the development of non-invasive predicting markers for liver fibrosis is of essential importance.

Some blood markers have been proposed as predictors of hepatic fibrosis in liver diseases, including albumin, hyaluronic acid, aspartate aminotransferase (AST) to platelet ratio (APRI), AST to alanine aminotransferase ratio (AAR), Fibrosis-4 (FIB-4) index, and blood platelet count (5-8). The immediate benefit of using non-invasive markers of fibrosis is obviation the need for liver biopsy and possibly other more expensive procedures (9, 10). Nevertheless, the application of these non-invasive markers in clinical practice needs validation of these indicators in the context of various liver diseases and different populations.

The majority of studies concerning this issue have been done in adult populations with less attention to childhood hepatitis. In the present study, we assessed the usefulness of four common non-invasive parameters, including APRI, FIB-4, AAR, and platelet count for detecting liver fibrosis in children.

This was a double-center retrospective study and included patients who referred to the Liver and Gastroenterology Clinics of Amir-Almomenin Hospital (Zabol, Iran), and Namazi Hospital (Shiraz, Iran). Time-span was from March 2015 to March 2017.

Those children diagnosed with chronic liver diseases were included in the study. The exclusion criteria were malignant or other systemic major diseases, immunodeficiency, and receiving previous treatments or liver transplantation.

The patients were evaluated with a liver biopsy at the time of diagnosis. Tissue samples were fixed by paraffin, alcohol, and formalin, and then were stained using hematoxylin-eosin (H&E) method. The stage of fibrosis was determined by the Metavir scale (4). Patients with fibrosis stages 0,1, or 2, were grouped as “no advanced fibrosis,” and those with fibrosis stages 3 and 4 were grouped as “advanced fibrosis” and “cirrhosis,” respectively. All tissue samples were checked by two independent trained pathologists.

(ULN = upper limit of normal which was considered 40 IU/l)

Because many of our patients had very young ages (days), we used “months”- instead of “years”- for calculating FIB-4. However, all analyses were also performed in parallel using “years”, which did not show any significant difference.

The data were entered into SPSS software version 19, and analyzed by descriptive statistics with mean and standard deviation (SD). The normal distribution of the data was assessed based on the Shapiro-Wilk test. The points with the highest sensitivity and specificity and the area under the curve (AUC) were determined using receiver operating characteristic (ROC) curve. The significance level was defined at P < 0.05.

Table 1 shows the basic biochemical and hematological characteristics of the patients regarding different etiologies. 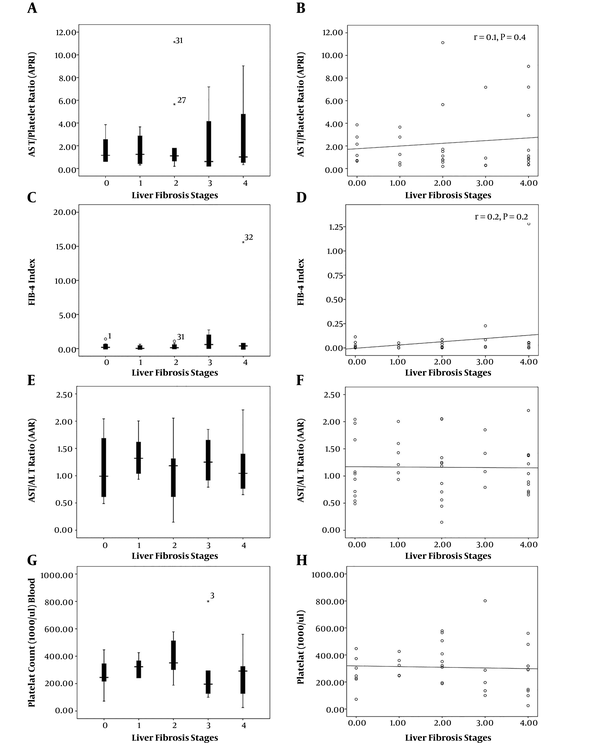 Receiver operating characteristic (ROC) curve analysis for the detection of minimal fibrosis (A) and advanced fibrosis and cirrhosis (B).

In ROC analysis for individual fibrotic stages, the highest AUC for the diagnosis of fibrotic stages 0, 1, 2, and 3 were related to APRI (0.541), AAR (0.713), platelet count (0.692), and FIB-4 (0.694), respectively. For cirrhosis, FIB-4 rendered the highest AUC = 0.592 (Table 3). The highest sensitivity of APRI (70%) was obtained at the cut-off of 0.81 for cirrhosis. The highest specificities for APRI were related to cut-offs 0.66 (68%) and 1.37 (68%) for detecting fibrotic stages 0 and 2, respectively. Table 4 shows optimal cut-off values for non-invasive parameters along with their sensitivity and specificity for detecting different fibrosis stages.

In the present study, we assessed the applicability of common non-invasive markers of liver fibrosis in predicting hepatic fibrotic stages in children with chronic hepatitis of different etiologies. APRI, AAR, and FIB-4 showed some extent of predictive capacity for the diagnosis of fibrosis in these patients. APRI and AAR showed the highest AUC values for detecting minimal and advanced fibrosis, respectively. However, individual analysis showed that the FIB-4 index might be a more appropriate parameter for detecting advanced fibrosis. Identifying reliable non-invasive markers for liver fibrosis is of critical importance in the management of various hepatic disorders. Non-invasive tests of livers fibrosis have been noted as appropriate alternatives for liver biopsy procedure (4, 11-13).

The validity of APRI has been established in predicting liver fibrosis of various etiologies (14, 15). In our study, APRI rendered AUCs 0.541, 0.355, and 0.540 for detecting minimal fibrosis (Stages 0, 1, and 2), advanced fibrosis (Stage 3), and cirrhosis (Stage 4), respectively. APRI also correlated with fibrosis stage (r = 0.1). In a study on patients with viral and autoimmune hepatitis, APRI correlated (r = 0.24) with fibrosis, which was in line with our results (16). In another report, however, APRI has not been associated with liver fibrosis in patients with immune hepatitis (17). In other studies, APRI has provided an AUC = 0.78 for detecting high-grade fibrosis (9).

We noticed that optimum thresholds of APRI for the diagnosis of fibrotic stages 0, 1, 2, 3, and 4 were 0.66, 1.2, 1.37, 0.92, and 0.81, respectively. Overall, the values for detecting minimal and advanced fibrosis were 1.13 and 0.72, respectively. The highest sensitivity (70%) of APRI was reached the cut-off = 0.81 for detecting cirrhosis (stage 4). This is while the highest specificities that were related to cut-off values 0.66 (68%) and 1.37 (68%) for detecting fibrosis stages 0 and 2, respectively. The desirable cut-off values of APRI for detecting fibrotic transformation in the liver could be highly variable considering the underlying etiologies of the liver fibrosis (8, 18). Although the optimum value of 0.93 has been noted in patients with hepatocellular, cholestatic liver disease, this value has been 2.35 in patients with hepatic biliary disease (19). In children with biliary atresia, optimal cut-off values for APRI were obtained at 1.01 and 1.41 for advanced fibrosis and cirrhosis, respectively (20). Generally, a cut-off value of 0.7 for APRI has been suggested as an indicator for predicting significant liver fibrosis (21). On the other hand, using cut-off values of ≤ 0.5 or ≤ 0.3 for ARPI may reliably rule out any fibrotic changes (8, 22). On the other hand, a value of ≥ 1.5 has been proposed as a strong indicator of severe fibrosis (8). In general, sensitivity and specificity of APRI are comparable to some high-resolution methods such as MR elastography and transient elastography-Fibro-Scan (7, 22-26).

Here, FIB-4 showed the highest AUC (0.592) for detecting cirrhosis. In correlation analysis, FIB-4 also correlated with fibrosis stage (r = 0.2). At the cut-off value of 0.21, FIB-4 showed the highest sensitivity and specificity (70% and 60%) for detecting cirrhosis. In line with these, FIB-4 has been described in association with fibrosis stages in immune hepatitis (17, 23) and HBV patients (15). In patients with HBV, FIB-4 yielded an AUC range of 0.750-1 for the diagnosis of advanced liver fibrosis (24, 27). FIB-4 is a sensitive index with comparable results with other sensitive methods such as fibro scan for fibrosis diagnosis (28). Nevertheless, the clinical application of FIB-4 needs to be validated for the etiology and stages of fibrosis, especially in pediatric populations.

In our study, the highest AUC for AAR was related to fibrosis stage = 1 (AUC = 0.713, 95% CI: 0.532 - 0.895). We noticed that the highest specificity for AAR was related to the cut-off value of 0.59 (90%) for detecting no fibrosis (stage = 0). On the other hand, AAR rendered the highest sensitivity (78%) for advanced fibrosis (stages 3 and 4) at the threshold of 0.71. In previous reports, AAR significantly correlated with hepatic fibrosis in HBV patients with an AUC of 0.586 for advanced fibrosis and cirrhosis (15). A cut-off value of ≥ 0.7 has been proposed for detecting advanced fibrosis with sensitivity and specificity of 87% and 39% in patients with HCV (9). In contrast, the value of ≥ 1.2 was proposed by Fouad et al. as the optimum level for the diagnosis of advanced fibrosis in HCV patients (10). One reason for these discrepancies may be the effects of some covariates such as age, obesity, metabolic disturbances, and viral load in infectious hepatitis that influence these factors (6, 25). To the best of our knowledge, this is the first report in children. One limitation of our study was the relatively low number of patients limiting the power of the study and reaching a significant level.

Our study assessed the applicability of non-invasive markers of APRI, AAR, and FIB-4 for detecting liver fibrosis in a childhood population with chronic hepatic diseases. Nevertheless, APRI, FIB-4, and AAR may be useful markers in predicting fibrotic transformation in children with various etiologies of hepatitis. In particular, APRI and AAR may be more applicable in detecting minimal fibrosis, while FIB-4 was more accurate in detecting advanced fibrosis and cirrhosis.

Copyright © 2020, Gene, Cell and Tissue. This is an open-access article distributed under the terms of the Creative Commons Attribution-NonCommercial 4.0 International License (http://creativecommons.org/licenses/by-nc/4.0/) which permits copy and redistribute the material just in noncommercial usages, provided the original work is properly cited.
download pdf 483.43 KB Get Permission (article level) Import into EndNote Import into BibTex
Number of Comments: 0