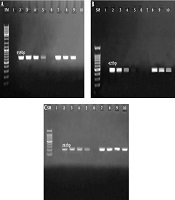 Escherichia coli is considered as one of the causes of opportunistic infections. Nowadays, due to the increase in drug resistance, the treatment of these infections has become very difficult and they are recognized as the main causes of death in hospitalized patients.

The aim of this study was to determine the prevalence of blaTEM, blaSHV, and blaCTX-M genes in E. coli strains isolated from the urinary tract infection in patients in Intensive Care Units of three different hospitals in Qom, Iran.

This study was conducted in three months from October to December 2014. A total of 200 E. coli samples were taken from the patients with urinary tract infections in Intensive Care units of Qom hospital. The disc diffusion method was used to determine the susceptibility pattern of antibiotic and phenotypic confirmatory tests for screening of the expanded spectrum beta-lactamase (ESBL) isolates. The presence of blaTEM, blaSHV, and blaCTX-M genes was evaluated by the polymerase chain reaction (PCR) assay.

Overall, the findings of this study showed that blaTEM was the most common gene with a frequency of 61.5% in ESBL E. coli.

Escherichia coli (E. coli) is recognized as one of the causes of nosocomial infections (1). Nowadays, due to the high prevalence of antibiotic resistance, E. coli is recognized as one of the most resistant bacteria to broad-spectrum antibiotics (2). Also, beta-lactam antibiotics are the most important drugs that are commonly used worldwide to treat bacterial infections (3). Resistance to beta-lactam antibiotics is created by different mechanisms, such as beta-lactamase enzymes, such as expanded spectrum beta-lactamase (ESBL), efflux pumps, and porins (4). ESBL-producing bacteria are associated with several crucial health problems in the world (5). Currently, more than 300 ESBLs have been identified, forming after mutation of beta-lactamase enzymes (6). The main encoding genes of the ESBLs are CTX-M, TEM, and SHV groups of Amber molecular class (7).

ESBL-producing bacteria are mainly found in Intensive Care Units (ICUs) of the hospitals (8) Also, they are resistant to other antibiotic groups (3). Therefore, suitable drugs to treat the bacteria will be very limited, which is the main concern regarding the spread of ESBL strains (9). Identification of this bacteria and increasing knowledge about its presence in a geographical location are effective in the proper and effective use of suitable antibiotics in the region (10). Accordingly, it is the responsibility of health and microbiological officials of each region to monitor and track the growth rate of bacteria resistant constantly, especially ESBLs strains, to control and prevent drug-resistant outbreaks (11). Also, the information on the growth and spread rate of these enzymes helps in the treatment and prevention of infections caused by Gram-positive and Gram-negative bacteria (12).

The purpose of this study was to determine the prevalence of antibiotic resistance and ESBL in E. coli isolates of the urine samples taken from the patients in Qom hospitals using the phenotypic and genotypic methods.

3.1. Separation of the Isolates

As stated earlier, during three months (October to December 2014), 200 samples suspected of E. coli were taken from the urinary tract infection (UTI) of the hospitalized patients in ICUs of three different hospitals in Qom, Iran, and then evaluated. Microbiological standard tests, such as gram stain, IMViC, oxidase, catalase, and fermentation/oxidation tests were used to identify the isolates (13) (all strains were Gram-negative bacilli, indol positive, citrate negative, Voges-Proskauer (VP) negative, and methyl red (MR) positive).

Combined carbohydrate-deficient transferrin (CDT) testing was applied to screen the ESBL-producing E. coli. The CDT phenotypic test was performed by the disks of ceftazidime (30 µg) and cefotaxime (30 µg) alone and in combination with clavulanic acid (10 μg) in Muller Hinton Agar. After 24 h of incubation at 37°C, an increase in zone size of ≥ 5 mm was considered as a positive ESBL isolate. In the present study, K. pneumoniae ATCC 700603 (prepared by the Pasteur Institute, Tehran, Iran) was used as positive control (15).

DNA extraction was performed using the boiling method. Then, the quality and quantity of all the extracted DNAs were evaluated by the spectrophotometer and gel electrophoresis. The presence of TEM, CTX-M, and SHV were studied using the polymerase chain reaction (PCR) assay (16). The ingredients of the PCR mixture were as follows for 25 mL PCR reaction: 50 mm of Tris-HCL, 50 mM of (pH = 8) KCL, 15 mm of MgCl2, 0.2 mm dNTP mix, 20 pM of each primer (Table 1), and 5 mg of the extracted DNA. PCR was performed at the temperature conditions shown in Table 2. The PCRs products were exposed to electrophoresis in 1.5% agarose gel.

The results of antibiotic susceptibility pattern, a confirmatory test for ESBL production, and the existence of blaTEM, blaSHV, and blaCTX-M genes were analyzed using SPSS software (version 16) and Fisher’s exact test. 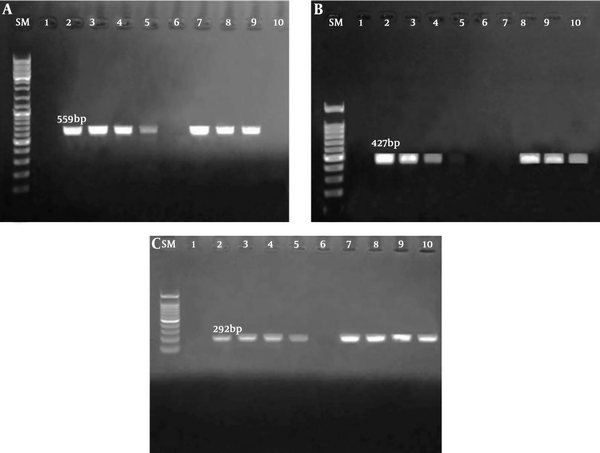 Over one million people hospitalized for different medical conditions and during a hospital stay have been infected with nosocomial infections. Nosocomial infection is the most common cause of complications and problems for medical personnel, patients, and all hospitals in Iran (17).

The risk of nosocomial infections has been reported to be from at least 0.27 (0%) to more than 6/27 (22.2%) between 2010 and 2015, respectively (18). These infections can easily be transmitted among patients and their visitors, hospital personnel, and those with direct contact with the hospital environment (1). The highest number of nosocomial infections occurs in the ICU, therefore, it is known as one of the most important responsibilities of lab technicians to identify and control these infections (9). Additionally, E. coli is the most evident and frequent organism, which is also a critical pathogen for UTI (19).

Interestingly, these findings are consistent with a previous study reflected a high rate of ESBL genes in clinical isolates, which clearly indicates the current challenges for the centers for infection control at hospitals and health centers in ICU Qom, Iran. Financial problems and the lack of facilities for molecular typing methods for epidemiology studies, such as pulsed-field gel electrophoresis (PFGE), multilocus sequence typing (MLST) that are effective in finding the relationship between strains, and ultimately finding their origin are some of the limitations of our study. The patients admitted to the ICU in our hospitals were not evaluated for the extent of beta-lactamase genes in the urine samples, which can be considered as the strength of the present study.

It is also hoped that in future studies, we will be able to take some effective steps to help in controlling nosocomial infections through molecular typing methods.

In conclusion, our results showed that among the examined genes, the most common gene was blaTEM, with a frequency of 61.5% in ESBL-producing E. coli taken from the patients with UTI admitted to the ICU in Qom, Iran.

Due to the high level of drug resistance of the studied isolates, it was very difficult to treat the infections. Accordingly, considering the high rate of drug resistance in our study, further studies are needed to find effective drugs, including nanoparticles, for eliminating these bacteria that are resistant to antibiotics.

The authors would like to thank the Islamic Azad University, Qom Branch, Qom, Iran.

Copyright © 2020, Gene, Cell and Tissue. This is an open-access article distributed under the terms of the Creative Commons Attribution-NonCommercial 4.0 International License (http://creativecommons.org/licenses/by-nc/4.0/) which permits copy and redistribute the material just in noncommercial usages, provided the original work is properly cited.
download pdf 866.42 KB Peer Review Comments ( 539.55 KB) Get Permission (article level) Import into EndNote Import into BibTex
Number of Comments: 0