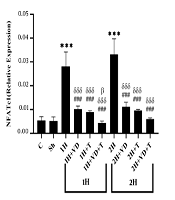 Increased reactive oxygen species disrupt the balance between osteoblasts and osteoclasts. Although the role of training (T) and vitamin D (VD) consumption in bone health has been shown, there is no accurate information on the role of these two interventions on the nuclear factor of activated T-cells, cytoplasmic 1 (NFATc1), as an osteoclast marker.

Therefore, this study aimed to examine the effect of T and VD on NFATc1 gene expression in bone tissue of rats exposed to H2O2.

It seems that T and VD consumption both alone and synergistically have a reducing effect on NFATc1 as an osteoclast index in rats exposed to 1 and 2 mmol/kg H2O2.

Bone is a dynamic tissue whose homeostasis is regulated by the balance between osteoblasts (bone formation) and osteoclasts (bone breakdown) (1). However, the increase in Reactive Oxygen Species (ROS) is one of the factors affecting bone health (1, 2). Increasing ROS causes mitochondrial damage and reduces bone mineralization by binding to membrane proteins, cytosolic proteins, and even DNA in the bone, leading to osteoporosis and fractures (1). Increasing ROS can also lead to the activation of receptor activator of nuclear factor κB ligand (RANKL). This mechanism is programmed by Tumor Necrosis Factor Receptor (TNFR)-associated factor 6 (TRAF‐6) and Nicotinamide Adenine Dinucleotide Phosphate (NAPDH) oxidase 1 (Nox1). Increasing RANKL and macrophage colony‐stimulating factor (M-CSF) augments c-Fos factor expression, and the nuclear factor of activated T‐cell cytoplasmic 1 (NFATc1) activates osteoclasts (2, 3). However, bone metabolism depends on the parathyroid hormone, calcium, vitamin D (VD), and micronutrients. Vitamin D contributes to the deposition of calcium in the bone, activation of transforming growth factor β (TGFβ), inhibition of RANK, NFATc1, and TRAF, and reduction of osteoclast activity (4, 5). Consumption of VD also leads to increased levels of C-terminal telopeptide (CTX), osteocalcin (OC), and bone-specific alkaline phosphatase (bALP) (5). In this regard, research has shown that the use of VD reduces oxidative stress and DNA damage in the bone (6). However, the conditions for using VD depend on factors such as baseline levels of oxidative stress, dosage, and duration of use so that consumption of VD for eight weeks did no change bALP and OC in bone tissue of rats exposed to 1 and 2 mmol H2O2 (7). Besides, eight weeks of VD consumption had no significant effect on 5b isoenzyme of tartrate-resistant acid phosphatase (TRACP/5B) and N-telopeptides of type 1 (NTX) in H2O2-poisoned rats (8). Also, VD at a dose of 2,800 IU per day for eight weeks had no significant effect on BALP, CTX, and OC (5).

Due to the role of other factors along with VD on bone metabolism, it seems that this intervention alone is not enough to improve bone homeostasis. On the other hand, researchers have pointed to the role of physical activity combined with proper nutrition in the improvement of various diseases. Exercise increases bone minerals (calcium and phosphorus) by enhancing the secretion of estrogen hormone, increasing the levels of calcitonin hormone, and modulating the parathyroid hormone (7, 8). Also, exercise can modulate osteoclasts under bone loss conditions by activating growth factors, increasing mitochondrial biogenesis, and increasing bone capacity for bone absorption and resorption (9). In this regard, eight weeks of exercise in positive and negative slopes reduced RANKL in ovariectomized (OVX) rats; however, a negative slope training had a more favorable effect on RANKL modulation than did a positive slope (9). Interval and continuous training could decrease the expression of RANKL and bone marrow macrophages in OVX rats; however, the effect of interval training was more favorable than continuous training (10). Studies have shown that eight weeks of aerobic training combined with VD consumption reduces OC expression in rats exposed to H2O2 (7). However, eight weeks of aerobic training and VD consumption did not have any interactive effect on the improvement of NTX and TRACP/5B in rats poisoned with 1 and 2 mmol H2O2 (8).

According to the contradictory findings regarding the effect of VD and the dependence of the effect of training on its type, intensity, and duration following oxidative stress conditions, it seems necessary to conduct fundamental studies to obtain more information about molecular-cellular mechanisms in these two interventions. Therefore, this study aimed to examine the effect of aerobic training (T) and VD consumption on NFATc1 gene expression in bone tissue of rats exposed to H2O2.

Table 1. The Sequence of Primers Used in the Study

The Shapiro-Wilk test was used to investigate the normal distribution of data and one-way ANOVA with Tukey post hoc test to analyze the data using Graph pad PRISM.8.3.0 software (P ≤ 0.05). 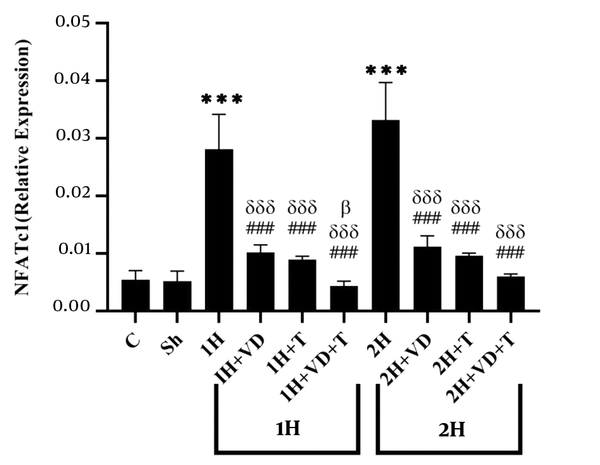 The results showed that the NFATc1 gene expression levels were significantly higher in the bone tissue of rats in the 1H and 2H groups than in the control group. Nevertheless, the NFATc1 gene expression levels were significantly lower in the 1H+T and 2H+T groups than in the 1H and 2H groups. The physiological ROS in the body has biological effects and is neutralized by antioxidants, but high levels of ROS challenge the balance of antioxidant-oxidative stress and lead to damage to various tissues, including bones. By reducing the activity of superoxide dismutase (SOD) and glutathione peroxidase (GPx), H2O2 leads to a decrease in the efficiency of the antioxidant system, and binding to osteoblast proteins leads to a decrease in their activity. Besides, H2O2 inhibits the differentiation and proliferation of osteoblasts by inhibiting the Nuclear factor erythroid 2-related factor 1 (Nrf1) and factor 2 (Nrf2) and inhibiting collagen proteins 1, Runx2, Osx, BMP2, TGF-β, and osteocalcin. Also, an increase in expression of inflammatory proteins, such as NFkB, RANK/RANKL, TNFα, TNFR, and TRAF6, can lead to activation of osteoclasts (8, 15, 16).

However, by increasing the blood flow of pericytes, increasing estrogen receptors, reducing oxidative stress, modulating parathyroid hormone and Osteoprotegerin (OPG)), reducing the expression of inflammatory factors such as TNF-α and IL-1, reducing NFκB, and modulating IL-6, exercise leads to the inhibition of RANKL and the decrease of TRAP, cathepsin K, DC-STAMP, and NFATC1 gene expression (17). However, the effect of exercise depends on age, gender, and duration of exercise so that six months of moderate-intensity exercise increased the levels of osteocalcin, TGF-β, IGF-1, and VD, and decreased the levels of interferon-γ and TNF-α in the elderly (18). Besides, 12 weeks of moderate-intensity endurance training improved bone metabolism, calcium, osteocalcin, and bALP in men and women over 65 years of age (19). However, 12 weeks of combined training had no significant effect on the serum levels of RANKL, OPG, RANKL/RANK/OPG, and TNF-α gene expression, but the IL-6 levels decreased in the training group of young college women (17).

In the present study, NFATc1 gene expression levels in the bone tissue of rats were significantly lower in the 1H+VD and 2H+VD groups than in the 1H and 2H groups. Consumption of VD can improve osteoblast cell function by modulating parathyroid and prostaglandin E2, increasing OPG expression, and inhibiting RANK/RANKL; moreover, the inhibition of RANKL inhibits TRAF6, NF-κB, and AP1 and leads to the activation of PLCγ, MAP kinases, and NFATc1 and inhibition of osteoclasts (20). Previous studies have shown that eight weeks of VD consumption increased OC in H2O2-exposed rats (7). Moreover, 100 and 500 nmol.L−1 concentrations in animal samples and 0.1 or 0.5 nmol.L−1 concentrations in the cell culture medium inhibited RANKL and decreased NFATc1 expression, while they increased the number of VD receptors (21). Also, 10 and 100 nM concentrations had a significant effect on increasing calcium, strength, and bone mineral mass (22). Eight weeks of 600 IU vitamin D consumption increased the parathyroid hormone and alkaline phosphatase in postmenopausal women (23). But, the effect of VD depends on the dose, duration of use, and the presence of other factors in bone metabolism (8). For example, eight weeks of VD consumption did not change NTX and TRACP/5B in the bone tissue of rats exposed to H2O2 (8).

In the present study, the NFATc1 gene expression levels in the bone tissue of rats were significantly lower in the 1H+VD+7 and 2H+VD+T groups than in the 1H and 2H groups. The results showed that VD+T reduced the expression of NFATc1; also, NFATc1 expression was significantly lower in the 1H+VD+T group than in the 2H+VD group. Exercise leads to a decrease in NFATC1 gene expression (17) by increasing the blood flow of pericytes, improving the estrogen metabolism, reducing oxidative stress, affecting hormonal modulation, increasing OPG, reducing inflammatory factors and RANKL (17). Consumption of VD reduces the expression of NFATc1 by modulating prostaglandin E2, increasing OPG expression, inhibiting inflammatory factors and their receptors, AP1, and activating PLCG and MAP kinases (20). No study was found that specifically examined the effect of exercise-VD interaction on NFATc1 expression, but the effect of these two interventions depends on initial bone health, duration of exercise, dose of VD, and other bone metabolic indicators. Studies have shown that exercise combined with 600 IU vitamin D increased the parathyroid hormone and alkaline phosphatase in postmenopausal women (23). However, T and VD consumption did not have a significant effect on Balp, OC, NTX, and TRACP/5B in rats exposed to 1 and 2 mm H2O2 (7, 8). Nonetheless, T increased NTX in the bone marrow of rats exposed to 2 mmol H2O2 (8). Exercise with hormonal and metabolic adaptations appears to be more desirable than VD consumption alone. Therefore, the synergistic effect of T and VD is probably more desirable than those of VD and T alone.

The lack of the comparison of our results with those of studies that specifically examined the NFATc1 levels was among the limitations of the present study. Also, due to the effect of oxidative stress on antioxidant enzymes, we were unable to measure RANKL, TNF-α, OPG, and bone metabolic markers, such as bALP and osteocalcin, which was another limitation of this study. Therefore, it is suggested that future studies examine these variables along with osteoclast activity. Due to the involvement of NFATc1 in the process of osteoclast activation, we were unable to measure osteoblast markers, bone mineral mass, and bone strength, which was the other research limitations of the present study. Therefore, it is suggested that future studies assess the balance between osteoblasts and osteoclasts, along with the assessment of strength and minerals.

In conclusion, it seems that T and VD consumption, alone or synergistically, have some reducing effects on NFATc1 as an osteoclast index in the bone tissue of rats exposed to 1 and 2 mmol/kg H2O2.

The present study is part of a doctoral dissertation approved by the Central Tehran Branch of Islamic Azad University. The authors express their gratitude and appreciation for the spiritual support of the Research and Technology Department of this university branch.

Copyright © 2020, Gene, Cell and Tissue. This is an open-access article distributed under the terms of the Creative Commons Attribution-NonCommercial 4.0 International License (http://creativecommons.org/licenses/by-nc/4.0/) which permits copy and redistribute the material just in noncommercial usages, provided the original work is properly cited.
download pdf 174.11 KB Peer Review Comments ( 96.71 KB) Get Permission (article level) Import into EndNote Import into BibTex
Number of Comments: 0