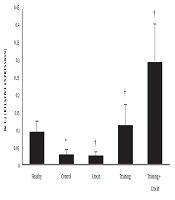 Apoptosis is one of the main means to remove undesirable cells that occurs in the eucaryotic and even procaryotic organisms.

This study aimed to examine the effect of 8 weeks of high-intensity interval training (HIIT) and crocin consumption on apoptotic factors in the soleus muscle of male rats exposed to doxorubicin.

The word apoptosis is a Greek word meaning the fall of a deciduous tree. In 1972, when Kerr et al. first observed the difference between necrosis and apoptosis, they did not think that their exploratory phenomenon would one day be at the forefront of anti-cancer studies (1). This process occurs with the irreversible fragmentation of DNA and the formation of apoptotic bodies attached to the membrane, which results in the cleavage of vital cell proteins (2, 3). There is some evidence that exercise may affect a number of apoptotic signaling pathways in the skeletal muscle (4). In response to apoptotic stimuli, a range of external and internal signals regulate the expression of genes that control the onset of apoptosis. In the internal pathway, genes express pro-apoptotic proteins (including Bax , Fas, P53, etc.) and anti-apoptotic proteins such as (Bcl-2 and Bcl-XL), and its outcome for the cell (death vs. survival) depends on the proportion of expressed genes. Bcl-2 is one of the most well-known apoptotic inhibitory proteins that inhibits the release of cytochrome C from mitochondria. In the external pathway (or death receptors) this pathway begins following ligation of the TNF receptor family and leads to activation of caspase-8 and subsequently caspase-3. Caspases are proteases that are synthesized as inactive zymogenes and undergo proteolytic failure during apoptosis. Further research has shown that shifting the Bax protein to the mitochondria and placing it inside the outer membrane releases other apoptotic agents (such as cytochrome c) from the mitochondrial interstitial space (5). However, Bcl2 protein counteracts the pre-apoptotic activity of Bax protein and preserves the integrity of the mitochondrial membrane (6-8). Finally, apoptotic messages are aligned in the activation of commonly effective caspases, including caspase-3, and cause possible cell destruction (2, 6, 8, 9). Therefore, researchers are always looking for appropriate strategies to prevent apoptosis and various muscle diseases associated with it. In the last decade, the effect of exercise on apoptosis has been of interest to researchers in the field of exercise (9). In this regard, a number of researchers have suggested that moderate-intensity continuous exercise may reduce apoptosis in various tissues (6, 8, 9). Unlike exercise, however, a session of strenuous exercise for up to 48 hours can accelerate the process of apoptosis (10, 11). Kim et al. (2010) reported that aerobic training decreased Bax protein expression, Bax/Bcl-2 ratio, and caspase-3 activity in rats’ soleus muscle tissue and increased Bcl-2 protein gene expression (12). Song et al. (2006) also noted that aerobic training increased Bcl-2 levels while decreasing caspase-3 activity, Bax, and Bax/Bcl-2 ratio in the calf muscle and soleus muscle of rats (7). However, contrary to the results of these studies, Liu et al. (2013) showed that nine weeks of endurance training significantly increased Bax and Bax/Bcl2 ratio in the skeletal muscle of rats (11). It should be noted that differences in the intensity and duration of aerobic training used in different studies have led to conflicting results in skeletal muscle apoptosis. Due to the better effect of interval training and some indicators such as aerobic capacity and increasing use of these exercises by athletes and ordinary people and even some patients, the effect of this type of training is a topic that can attract the minds of sports researchers. Considering the use of medicinal plants with therapeutic and antioxidant properties, one can refer to the saffron plant. Saffron has several compounds, including crocin, crocetin, and safranal. Among its active components, crocin is the main cause of its various pharmacological activities (13). Crocin is one of the most important carotenoids in saffron and the causative agent of saffron dye. Among the properties of crocin, we can mention its anti-atherogenic and anti-clotting, as well as the nervous system and neuronal protective effects (14). Crocin has been shown to reduce doxorubicin-induced cardiac toxicity by negatively regulating inflammatory and apoptotic pathways in rats (15). Other suggested mechanisms for the antitumor effects of saffron compounds such as crocin include inhibition of nucleic acid and free radical chain reactions, the effect of carotenoids on topoisomerase II, and induction of apoptosis (16).

In this experimental study, 60 male Wistar rats weighting approximately 220 ± 20 grams (Table 1) were purchased and transferred to the animal laboratory in standard conditions. The animals went through an adaptation phase for seven days. Then they were divided into five groups: 1) control, 2) training, 3) crocin, 4) training + crocin, and 5) healthy control. Groups 1 to 4 received 2 mg/kg doxorubicin (Belgian company Ebeve) weekly by intraperitoneal injection for seven weeks (17). Groups 3 and 4 received 10 mg/kg of crocin (Sigma-Aldrich Company, USA) via oral gavage daily (18), and groups 2 and 4 performed high-intensity interval training, including a combination of interval repetitions with an intensity of 80 to 90% of maximum speed and low intensity with 30 to 40% of maximum speed at two-minute intervals for eight weeks and every week for five days. After 48 hours from the last training session, the rats were anesthetized by injection of ketamine (80 mg/kg), and xylazine (10 mg/kg) (19) and their soleus muscle was extracted, and then, the sample was placed in a cryotube and kept in liquid nitrogen at -70 ° C to check gene expression of Bax, Bcl-2 and caspase-3 proteins. Real time PCR technique was used to measure the expression of these genes. First, primer design was performed, and then total RNA was extracted from tissues and converted to cDNA. The cDNA was then proliferated by PCR and examined for the expression of the mentioned genes. The sequence of primers can be seen in Table 2.

The data were represented in text, figures, and tables as mean and std. Two-way analysis of variance (HIIT × Crocin) was used to analyze the statistical differences among the groups to verify the main and interaction effects. The significance level was considered as less than 0.05 (Figures 1 to 3). 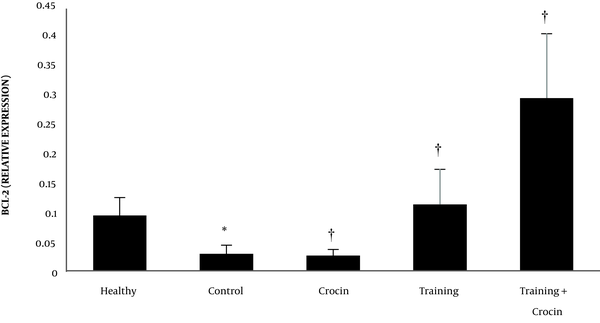 In conclusion, it appears that high-intensity interval training and crocin consumption alone can improve the doxorubicin-induced apoptosis process. However, simultaneous high-intensity interval training with crocin extract has more favorable effects on the doxorubicin-induced apoptosis process than either alone.

Therefore, exercise, the use of crocin supplements, and a combination of two methods can be considered as effective non-pharmacological treatments to reduce muscle damage and protect muscle tissue against damage caused by the side effects of chemotherapeutic drugs. However, given the limitations of this study, such as using the TUNEL and Western blot method, more research is needed to identify the effects of exercise training and crocin on indices of muscle apoptosis.

Copyright © 2020, Gene, Cell and Tissue. This is an open-access article distributed under the terms of the Creative Commons Attribution-NonCommercial 4.0 International License (http://creativecommons.org/licenses/by-nc/4.0/) which permits copy and redistribute the material just in noncommercial usages, provided the original work is properly cited.
download pdf 163.48 KB Peer Review Comments ( 161.27 KB) Get Permission (article level) Import into EndNote Import into BibTex
Number of Comments: 0