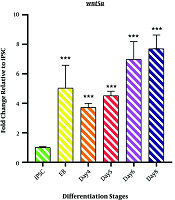 Induced pluripotent stem cells (iPSCs) have the ability to proliferate indefinitely and differentiate into three germ layers of ectoderm, mesoderm, and endoderm. Definitive induction is the first and the most delicate stage of differentiation of various iPSC-derived organs. It has been found that the Wnt signaling pathway implicates in embryogenesis, organogenesis, and cell communication.

In the present study, we aimed to investigate the expression pattern of the Wnt5a gene as an indicator of non-canonical Wnt signaling activity during definitive endoderm induction of iPSCs.

The production of efficient EBs confirmed by a decrease in Nanog and Oct4 gene expression and the success of DE (definite endoderm) induction step was confirmed by a high expression level of DE specific genes, Sox17, and FoxA2. A significant upregulation of Wnt5a in EB samples and a minor decrease at day 4 was observed. However, the differentiation process followed by an incremental fashion in Wnt5a mRNA expression starting from day 4 of differentiation among the samples of days 6 and 8 (DE stage).

Our results suggest that Wnt5a is more activated at the later steps of endoderm induction rather than the early steps, which may be due to the stimulation of canonical Wnt signaling. Finding the expression level of Wnt5a could rise insights for developing more efficient differentiation induction protocols.

The reprogramming techniques of somatic cells by the introduction of pluripotency transcription factors led to the generation of induced pluripotent stem cells (iPSCs). Like embryonic stem cells, iPSCs have the ability to proliferate indefinitely and differentiate into three germ layers of ectoderm, mesoderm, and endoderm (1). Definitive endoderm cells can be differentiated into internal organs such as lungs, liver, pancreas, and thyroid (2). Therefore, definitive induction is the first and the most delicate stage of differentiation of various iPSC-derived organs. There are diverse signaling pathways involved in definitive endoderm generation, including TGFβ, SHH, and Wnt pathways (3, 4). Wnt signaling pathway comprises two different classes of canonical and non-canonical Wnt pathways. Both are controlled by a set of glycoprotein ligands, which are recognized by their cognate cell surface receptors, Frizzled family, and coreceptors of low-density-lipoprotein-related protein5/6 (LRP5/6). The attachment of Wnt ligands to frizzled receptors leads to the activation of Dishevelled (Dvl) protein (5, 6). In canonical Wnt signaling, β-catenin plays the central role, which is under constant degradation by a destructive complex, consist of, glycogen synthase kinase-3β (GSK-3β), adenomatous polyposis coli (APC), casein-kinase 1α (CK1α), and Axin (6, 7). By induction of canonical Wnt signaling by specific ligands such as Wnt3a, β-catenin is translocated into the nucleus and activates Tcf/Lef transcription factors to initiate the expression of target genes (8, 9). Non-canonical Wnt/planar cell polarity (PCP) signaling is induced by different sets of ligands, such as Wnt4 and Wnt5a (10, 11). The signal transduction cascade in Wnt/PCP pathway is initiated independent of β-catenin, from Dvl to secondary effectors, c-Jun N-terminal kinase (JNK), and the small GTPases of Rho and Rac, which lead to cytoskeleton rearrangement and activation of AP1 transcription factors to alter gene expression (12).

Wnt signaling pathway has been established to be implicated in embryogenesis, organogenesis, and cell communication. However, canonical Wnt signaling is responsible for cell hemostasis and proliferation whereas, Wnt/PCP is in favor of differentiation of stem cells into various types of cell lineages such as adipocytes, osteocytes, and cardiac cells (6, 13-17).

This study was designed to investigate the expression pattern of the Wnt5a gene as an indicator of non-canonical Wnt signaling activity during definitive endoderm induction of iPSCs.

The commercially available Human iPSCs (RSCB0042) were purchased from Royan stem cell bank (Royan Institute, Tehran, Iran). Briefly, iPSCs were cultured on a feeder layer of mitomycin (M7949, Sigma, Germany) inactivated mouse embryonic fibroblasts (MEF) incubated at 37°C, 5% CO2 and humidity of 80 - 90% (18). Dulbecco modified eagle medium (DMEM)/Ham’s F12 (Gibco, Life Technologies, USA) was used as the basic medium for iPSC culture supplemented with 20% knockout serum replacement (KOSR) (10828020, Gibco), 5μg/mL selenium, insulin-transferrin-selenium (ITS) (I1884, Gibco), 100 Unit/mL penicillin, 100 µg/mL streptomycin (P4333, Sigma-Aldrich), 0.1 mM non-essential amino acids (M7145, Sigma-Aldrich), 0.1 mM 2-mercaptoethanol (15433, Merck) and 12 ng/mL basic fibroblast growth factor (bFGF) (F0291, Sigma-Aldrich). The culture media was exchanged every other day, until iPSC colonies covered at least 70% of the culture flask surface. Then iPSC colonies were collected for embryoid body (EB) generation by suspension culture method (19). Subsequently, iPSC colonies were detached from culture flask by cell scraper and resuspended in ultra-low attachment plates (SPL, Korea) with DMEM/ F12 medium supplemented with 20% fetal bovine serum (FBS) (Gibco), 100 Unit/mL penicillin, and 100 μg/mL streptomycin for three days. Then, EBs were collected and cultured in six-well cell culture plates (SPL) coated with 2% gelatin (G1890, Sigma, Germany) and kept for 3 days at 37°C, 5% CO2, and humidity of 80 - 90%. The endoderm induction step was performed using a series of small molecules based on our previous researches (4). Therefore, the previous medium is removed and EBs were cultured in RPMI1640 medium (21875034, Gibco) containing 30 ng/mL of Activin A (H4666, Sigma) and 3 μM CHIR99021 (SML1046, Sigma) without serum supplement. Further CHIR99021 was removed from the medium after 24 hours with a gradual increase in serum supplement in the medium. Therefore, the next day, the medium was replaced with a fresh one containing 0.2% KOSR and 30 ng/mL of Activin A. After 48 hours, the medium was removed with the replacement of 2% KOSR containing medium, which was continued for three days. Cell samples were harvested for RNA extraction at days 0 (iPSC), 3 (EB), 4, 5, 6, and 8 (definitive endoderm).

Collected cell samples were washed by Phosphate buffered saline (PBS), and then total RNA was extracted by RnaSol mRNA extraction kit (Alphabio, USA) according to the manufacturer’s instruction. In order to prepare complementary DNA (cDNA), PrimeScript First Strand cDNA Synthesis Kit (6110A, Takara, Japan) was used with 500 ng of total RNA. The quantitative real-time PCR was performed by StepOnePlus instrument (Applied Biosystem, USA) and SYBR® Premix EX TaqTM II kit (RR820A, Takara, Japan). The unique forward and reverse primers for Wnt5a mRNA (sequences and melting temperatures are presented in Table 1) were uniquely designed by AlleleID software (version 7.5). Amplification was performed in 10 μL aliquots with 10 pM of each primer. GAPDH gene was used as an internal control for expression normalization. All reactions were done in triplicate.

Table 1. The Sequence of the Primers Used in This Study

Real-time data were analyzed by LinRegPCR software (version 2017.1) to identify the highly efficient reactions (95%105% and 0.99). Statistical analysis and fold changes were calculated by GenEX software (v.7.0.2.164). The Fold changes ratio was quantified against iPSC. One-way ANOVA was used for the comparison between cell samples with Tukey-Kramer’s for post hoc test. The P-value of less than 0.05 was considered statistically significant.

The success of the differentiation process was verified by the assessment of specific marker genes. Initially, the pluripotency characteristics of iPSCs were confirmed by the observation of pluripotency marker genes, Nanog, and Oct4 genes expression. Also, EBs were efficiently produced from fully grown iPSC colonies and showed a decrease in Nanog and Oct4 gene expression (0.175 ± 0.043; P < 0.001 and 0.213 ± 00.053; P < 0.001 respectively). The significant downregulation of Nanog and Oct4 genes during the rest of the differentiation induction was the indicator of successful escape from pluripotency (Figure 1A). The success of DE induction step was confirmed by the assessment of DE specific genes, including Sox17 and FoxA2. Both genes showed elevated expression levels compared to iPSC (9.937 ± 0.464; P < 0.001 and 209.615 ± 1.08; P < 0.001 respectively) (Figure 1B). 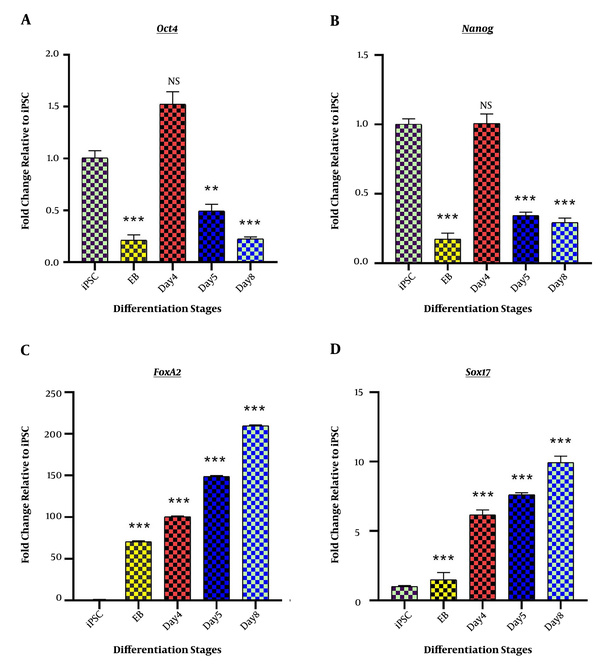 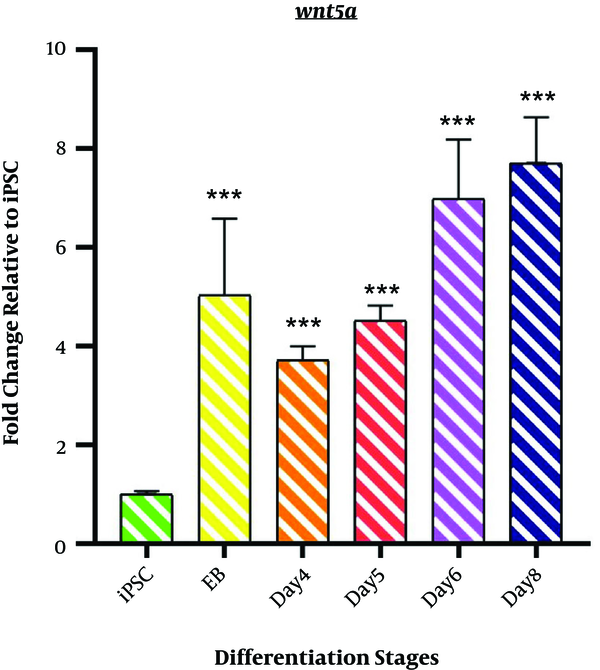 Non-canonical Wnt signaling contributes to developmental pathways and differentiation. We studied the expression profile of the Wnt5a gene, during endoderm induction and suggest that Wnt5a is more activated at the later steps of endoderm induction rather than the early step, which may be due to the stimulation of canonical Wnt signaling. Understanding the expression pattern of Wnt5a may provide insights into developing more efficient differentiation induction protocols.

Copyright © 2020, Gene, Cell and Tissue. This is an open-access article distributed under the terms of the Creative Commons Attribution-NonCommercial 4.0 International License (http://creativecommons.org/licenses/by-nc/4.0/) which permits copy and redistribute the material just in noncommercial usages, provided the original work is properly cited.
download pdf 1.82 MB Peer Review Comments ( 102.55 KB) Get Permission (article level) Import into EndNote Import into BibTex
Number of Comments: 0