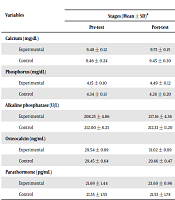 Effect of Eight Weeks of Aerobic Interval Training on the Serum Concentrations of Alkaline Phosphatase, Osteocalcin and Parathyroid Hormone in Middle-aged Men

Osteoporosis is the most common disorder of bone and mineral metabolism. This disease is associated with decreased bone density and loss of bone microstructure, leading to increased fragility and risk of bone fractures.

The aim of this study was to evaluate the effect of eight weeks of aerobic interval training on the serum concentrations of alkaline phosphatase, osteocalcin, and parathyroid hormone in middle-aged men.

This was a quasi-experimental study of 24 men, who were divided into two groups of control (n = 12) and aerobic interval training (n = 12). Training performed during eight weeks, three times a week, each session for 45 to 60 minutes. Blood samples were analyzed for the concentrations of calcium, phosphorus, alkaline phosphatase, osteocalcin, and parathyroid hormone before and after completion of the training program. Paired samples t-test and analysis of covariance (ANCOVA) were run to analyze the data (P ≤ 0.05).

It can be stated that eight weeks of aerobic interval training may be effective in preventing osteoporosis by reducing body composition indices and increasing calcium, phosphorus, alkaline phosphatase, osteocalcin, and serum parathyroid hormone in inactive men.

Osteoporosis is a privilege systemic skeletal disease characterized by severely low general bone mass (bone hollowing). In this condition, bone composition does not change in quality, but it does decrease in quantity (1). The risk of osteoporosis is higher in men during the first 3 to 5 years after inactivity due to increased bone loss rate (2 - 6.5% per year) (2). Fracture caused by osteoporosis occurs in 60% of women and 30% of men aged over 60 years. Approximately one in three women and one in twelve men develops osteoporosis, leading to 10.000 debilitating fractures in patients. However, only a small number of these patients are evaluated (3, 4). Therefore, increased bone resorption with disproportionate formation could result in decreased bone density and osteoporosis (5). The bone regeneration process could be assessed using bone formation and bone resorption biomarkers. These biomarkers include bone matrix components, substances, and enzymes that are released during the regeneration process (6). Alkaline phosphatase, osteocalcin, and parathormone hormone are the main biomarkers of the bone regeneration process (7).

Alkaline phosphatase is a noble indicator of bone formation (8). Alkaline phosphatase is a group of hydrolase enzymes produced by the kidneys, liver, and bones. Alkaline phosphatase is mainly attached to the cell membrane. The role of this enzyme is to remove the phosphate agent from phosphate-containing organic esters and to facilitate the movement of substances from the cell membrane. Hepatocyte cells produce these enzymes, and then they attach to the canalicular cell surface. Osteoblasts produce the bone isozymes responsible for breaking down pyrophosphate (an inhibitor of bone mineralization) (9, 10). Osteocalcin is a specific bone protein circulating in the blood (11).

Osteocalcin is characterized by the presence of carboxyglutamic acid residues, which are essential for the binding of osteocalcin to hydroxyapatites and bones (12). Osteocalcin produced by osteoblasts is involved in calcium mineralization and homeostasis. Parathormone, which is secreted by the parathyroid gland, plays an important role in regulating blood calcium and osteocalcin, which are the important biomarkers of bone metabolism (13). The parathyroid hormone is key to calcium homeostasis and bone metabolism (13). This hormone is one of the main components of bone mass in adults and is closely related to bone loss, osteoporosis, and fractures. The secretion of this hormone is affected by calcium (14). Regular and long-term physical activity can affect bone metabolism indices, prevent further bone desorption, reduce the secretion of parathyroid hormone, increase calcitonin, and prevent bone tissue from losing calcium and other minerals (15). A number of studies evaluating bone biochemical markers have addressed the effect of exercise on bone metabolism (16, 17), some of which have shown the anabolic effects of exercise on the bone (17, 18), while others have demonstrated the negative effects of exercise on bone metabolism. Empirical evidence confirms that physical activity has positive effects on skeletal mass (19), and relatively intense exercise lasting more than six months is more effective to increase bone density compared to high-repetition and low-pressure exercises (20).

Despite the importance of alkaline phosphatase, osteocalcin, and parathormone levels in calcium and phosphorus metabolism and the significance of preserving bone salts (i.e., calcium and phosphorus) to prevent osteoporosis in inactive men and considering the possible role of long-term periodic aerobic training in changing these factors and maintain bone mass, the relationship between bone markers and bone density adaptations as an indicator of bone growth is not yet fully understood. Former studies have reported contradictory results regarding the response of bone metabolism markers, and optimal training cannot be suggested for maximum bone formation (21).

The aim of this study was to evaluate the effect of eight weeks of aerobic interval training on the serum concentrations of alkaline phosphatase, osteocalcin, and parathyroid hormone in middle-aged men.

This was a quasi-experimental study with a pre-test and post-test design. The statistical population of this study included 60 overweight and middle-aged men in residing Bojnourd, Iran. The statistical samples of this study included 24 overweight middle-aged men with an age range of 40 to 47 years, who were selected by the available and purposive sampling methods. Firstly, the study objectives and procedure were explained to the participants, and they signed written informed consent forms. Health was examined based on the health questionnaire. The inclusion criteria comprised of not using any medications, not smoking, and not having participated in any exercise program for at least two months before participating in the exercise program. Subjects were then randomly divided into the two groups of aerobic interval training (n = 12) and control (n = 12).

To estimate the maximum oxygen consumption, the Naughton protocol was performed on a treadmill. The Naughton test was performed in 10 two-minute stages, except for the first stage, which was at a speed of one mile per hour; the constant speed at the next stages was two miles per hour. The slope of the device was zero in stages 1 and 00, and as of the third stage the slope increased 3.5% in each stage. The maximum oxygen consumption in the Naughton protocol was calculated using following equation (22).

Blood samples were collected by an experienced laboratory sciences expert in two stages from the left vein of each case in a sitting position and at rest 48 hours before the start of the training program and 48 hours after the last training session. Both before and after training, 5 cc of blood was taken from the brachial anticoagulant vein, and the samples were frozen at -18°C. To determine the serum amount of alkaline phosphatase using Pars ALP kit (made in Iran, with a sensitivity of 3 units per liter), the standard synthetic photometric method was used. Also, serum phosphorus and calcium levels were determined using the photometric method (Pars Company Kit, Iran) with a sensitivity of 0.7 and 0.2 mg/100 ml, respectively. The level of osteocalcin was determined by the ELISA method with a standard BIOVENDER kit (made in England). ELISA method and Biosource hPTH commercial kit (Biosource Eroup, Belgium) were used to measure the parathormone level. The kit's sensitivity was 0.1 ng/L.

The training program included periodic aerobic exercise for eight weeks, three sessions a week each session for 45 to 60 minutes. The high-intensity training (HIT) program included warm up with a variety of stretching and flexing movements for 10 minutes and then performing intense periodic movements with one active rest minute between each set. The training program was implemented from simple to difficult, taking into account the principle of overload and increasing the training intensity.

The collected data was analyzed using SPSS, version 16. For ensuring the normality of the data, the Shapiro-wilk statistical test was used, and Levene's test was run to examine the homogeneity of variance. To compare intragroup and intergroup changes, t-test and analysis of covariance (ANCOVA) were run, respectively. A P-value of less than 0.05 was considered significant.

aThe mean difference is significant at the 0.05 level.

a The mean difference is significant at the 0.05 level.

Eight weeks of aerobic interval training significantly increased the serum level of osteocalcin in men. Osteocalcin is inactively stored in the extracellular matrix of bones as gamma carboxyglutamic acid, and for activating, it is converted to non-carboxylic osteocalcin in the bone resorption cavity at a pH of 4.5 and released into the bloodstream. Insulin then binds to its receptor in osteoblasts in a feedback axis and promotes bone resorption by inhibiting osteoprotegerin activity. Indeed, insulin signaling in osteoblasts reduces osteoprotein gene expression by inhibiting foxo1 activity, which downregulates bone resorption, promotes osteoclast activity, and releases the active form of osteocalcin (25). One of the main mechanisms through which exercise increases osteocalcin level is increased bone cell activity and response to exercise-induced mechanical stress, which leads to more osteocalcin secretion by these cells, and the second is related to the disruption of energy metabolism homeostasis during physical activity in the body. Recently, bone has been mentioned as an active metabolic tissue during physical activity, and signals from changes in insulin and glucose lead to increased bone cell activity and the stimulation of osteocalcin secretion (26-28).

Based on our results, eight weeks of aerobic interval training significantly increased parathormone, calcium, and phosphorus levels in inactive men, which is consistent with some former findings (29-31). However, contradictory results have been reported by some other studies (16, 32). Participating in aerobic interval training causes high energy consumption. In endurance activities, frequent muscle contractions to maintain activity and release of the required energy are strongly dependent on the calcium presence. On the other hand, during endurance activities lasting a long time, a large number of body salts, including calcium, are excreted through the skin during the sweating process. Therefore, blood calcium level decreases (33). Because blood calcium level must always be constant, they activate blood calcium-sensitive hormone systems. Parathormone, which is secreted by the parathyroid gland, activates osteoclasts and bone catabolism to compensate for the required calcium (34). Besides, other factors such as catecholamine level and acidosis can alter parathyroid hormone secretion (17). The adrenergic system is activated during exercise and is a factor to regulate parathyroid hormone. Lactic acid also affects the density of this hormone and acidosis and stimulates hormone secretion and modulates the adrenergic system (17). This discrepancy between the results of the present study and the findings of the above-mentioned studies can be attributed to differences in participants’ age and sex or duration, intensity, and type of exercise program.

In addition to bone mineral density, numerous factors may contribute to bone strength including bone structure, shape, size, and sex hormone levels, which were not addressed in this evaluation; therefore, future studies on this issue are recommended. Because aerobic exercise can be one of the factors affecting sex hormones and bone biomarkers due to physiological variation, and such variables depend on the intensity, exercise duration, and physical fitness, it could be advised to coaches and exercise practitioners to consider the necessary precautions when designing exercise programs. This study had some limitations, including variable diets of the participants, various adaptive responses to physical activity, a number of subjects withdrew from the study, and individual differences; thus, extrapolation of the findings should be performed with caution.

The authors would like to thank the members of the Exercise Physiology Department for their suggestions and help in performing this research.

Copyright © 2021, Gene, Cell and Tissue. This is an open-access article distributed under the terms of the Creative Commons Attribution-NonCommercial 4.0 International License (http://creativecommons.org/licenses/by-nc/4.0/) which permits copy and redistribute the material just in noncommercial usages, provided the original work is properly cited.
download pdf 136.65 KB Get Permission (article level) Import into EndNote Import into BibTex
Number of Comments: 0