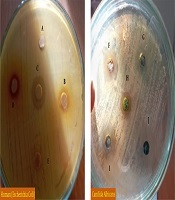 Continuous and indiscriminate use of chemical drugs causes resistance to microorganisms, which in turn weakens the effect of drugs. This adverse event is associated with an increased number of drugs used by patients and the tendency to use compounds with newer and stronger formulations. Furthermore, the essential oils of several plants contain a significant inhibitory effect on pathogenic microorganisms.

Hence, the current study intended to evaluate the antimicrobial activity of some medicinal plants on some standard human pathogenic bacteria and Candida albicans fungi isolated from women.

Leaves of Cichorium intybus L., Hypericum perforatum L., Lavandula angustifolia, Thymus vulgaris L., and Taxus baccata L. were collected and analyzed in the botanical laboratory of the University of Zabol. Then, the ethanolic extract was prepared using 40 g of dried leaves in 400 cc of ethanol. Standard bacteria and fungi were obtained from the center for genetic and biological resources of Iran. To determine the activity of free radical trapping, diphenylpicryl hydrazyl was used, and then the antimicrobial effects were investigated by diffusion method in Müller-Hinton agar medium using 6 mm paper disks according to the Bauer and Kirby instructions. Statistical calculations were administered using Statistx Ver10. Mean comparisons were performed using the LSD at the 1% level, and Excel was also used to draw the shapes.

The diameter of the inhibitory zone of plant extracts against standard bacteria and clinical fungi of Candida albicans at a dilution of 100 ppm was analyzed, which revealed different effects (P < 0.01). Taxus baccata L., with a 15 mm diameter growth zone, showed the highest effect on inhibiting the growth of Bacillus cereus and Pseudomonas aeruginosa. Hypericum perforatum L. with a diameter of 15 mm was found as the most useful plant in inhibiting Shigella dysentery., with a diameter of 10 mm, was the most useful plant in inhibiting the growth of Escherichia coli. The Taxus baccata L., with a maximum growth inhibition zone diameter (20 mm), has been the most effective plant against Candida albicans.

Considering the side effects of chemical drugs and antibiotics as well as the significant effect of medicinal plant extracts used in this study, the Taxus baccata L. was the most useful plant on inhibiting Candida albicans, Bacillus cereus, and Pseudomonas aeruginosa. Moreover, Hypericum perforatum L. was found as the most useful plant to control the growth of Escherichia coli.

Investigating the antimicrobial effects of secondary metabolites of medicinal plants, such as essential oils and plant extracts, showed that at least one-third of all medicinal products are of plant origin or have been modified after extraction from the plant. In addition to preventing the growth of bacteria and food contaminated mold, these substances are used to increase the shelf life of processed foods as well as fruits and vegetables (1-7). Chicory (Cichorium intybus L.) belongs to the genus Asteraceae. Its roots, leaves, and seeds contain several medicinal compounds such as inulin, sesquiterpene, Lacoten, Kumarin, flavonoids, and vitamins that are used as anti-hepatitis, anti-nephrotic, anti-cancer, appetizer, and anti-inflammatory. In addition, their antibacterial properties against chicory root extract have been reported (8-10).

Hypericum perforatum L. belongs to the genus Clasias and contains a wide range of secondary metabolites such as flavonoids, proanthocyanidins, and naphthodiandrons (ipricin and pseudoeprycin (acyl fluoroglucinols (hyperforin and adheiphorphin)). It has many therapeutic properties like hypothyroidism, anti-inflammatory, anti-viral, antioxidant, anti-tumor, and antibacterial, but its most significant effect and application has been reported in the treatment of depression (11-13).

The Taxus baccata L. is a coniferous leaf belonging to the Taxaceae family. Its medicinal value roots in the presence of Paclitaxel under the brand name Taxol in its needle leaves. Taxol, by forming an abnormal division spindle, can cease DNA transcription at the G2/M stage of mitotic division, thereby killing proliferating cells. The Food and Drug Administration has approved Taxol in 1977 for the treatment of uterine and breast cancers. Despite the invention of new methods of preparation of Taxol, such as cell culture, extraction from plant sources still retains its importance and place in supplying this valuable drug (16, 17).

As different medicinal plants pose various effects on microbes and the other hand the use of antibiotics is common (18).

Cichorium intybus L., Hypericum perforatum L., Lavandula angustifolia, and Thymus vulgaris L. from Shahrekord (Coordinates: 32°19’32”N 50°51’52 E) and the leaves of the yew tree (Taxus baccata L.) were collected from Behshahr, Mazandaran province (36°41’32 36 N°53°33 53 09’E), and the species were determined in the botanical laboratory of the University of Zabol.

The leaves of the plants used were dried in the shade and in the vicinity of air. Then 40 grams of leaves were ground (IKA company model A11 basic in Germany). The dried leaves were then soaked in 400 cc of ethanol for 96%. Shake for 48 hours at room temperature on a shaker (UniEquip SKIR-601L Germany). Then, the extracts were filtered, and the solvent was evaporated at a temperature of less than 40°C by a rotary device (Pars Azma Company, model RO02, Iran). The weighted extracts were weighed, and then 100 mg of the extract powder was dissolved in 1 cc of DMSO solvent. The extracts were stored in the refrigerator at 4°C until used in antimicrobial experiments (5).

In this section, the antimicrobial effects of the abovementioned plant extracts on human pathogens were investigated by diffusion method in Müller Hinton agar culture medium (made by Merck Germany) using paper discs (6 mm). In addition, microbial susceptibility was determined following the method proposed by Bauer et al.

The MIC was defined as the lowest concentration required to stop the bacterial growth after 24 hours of incubation. To determine the minimum bactericidal concentration (MBC), 10 microliters of the wells was secondarily cultured on a nutrient agar medium (manufactured by Merk-Germany) after 24 h of incubation, and plates were examined for bacterial growth for 24 hours. The lowest concentration of essential oil in which 99.9% of bacteria did not grow was considered as MBC (19, 20). All antimicrobial tests were performed in triplet.

Statistical calculations were administered using Statistix software version 10. Mean comparisons were performed using the least significant difference (LSD) at the 1% level, and Excel was also used to draw the shapes.

4.1. Diameter of Inhibition Zone of Plant Extracts on the Bacteria Used

Table 1. Diameter Variance Analysis of Inhibitory Zone of Extracts of different Plants Against Different Bacterial Agents at Dilution of 100 ppm

aSignificant at the level of one percent. 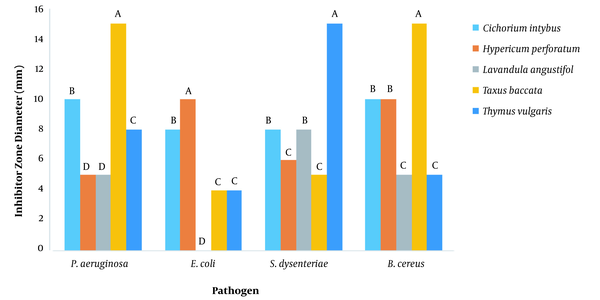 The diameter of non-growth zone of different plants extracts against bacteria used in a dilution of 100 ppm. Similar letters indicate no significant difference

4.2. Diameter of Inhibition Zone of Plant Extracts on Candida albicans

A study on the chemical composition and antibacterial activity of Iranian Lavandula × hybrid concluded that the diameter of the growth inhibition zone against S. aureus and E. coli was 9.36 and 23.3 mm, respectively. A significant association between the composition of essential oil and the level of antibacterial effect, expressed as inhibition areas, has been reported (21). In the present study, no E. coli was grown in a medium containing N. binaludensis Jamzad extracts.

A study on antibacterial properties of essential oils and hydrosols and aqueous extracts of Lavandula spp. grown in Australia reported that the hydrosols and aqueous extracts of the leaves of the plant had no antibacterial activity. This study also and concluded that different species of Lavandula spp. may have different antibacterial properties (22). In the present study, N. binaludensis Jamzad was effective against E. coli and no E. coli was grown, which confirms the different effects of various species of lavender against bacteria. They have interesting microbes and maybe a new potential source of natural antimicrobial as well as a new wound healing product (23), which confirms the effect of plant species on antimicrobial properties. The synthesis of antibacterial silver nanoparticles has been investigated using the extract of yew (Taxus baccata L.). It was concluded that the lowest MIC was obtained for S. pyogenes at a concentration of 50 µg/mL and for E. coli and S. aureus at a concentration of 25 µg/mL. Finally, they suggested that the use of biological compounds, mainly plant extracts, instead of toxic and hazardous chemicals, to synthesis silver nanoparticles, could reduce the environmental concerns regarding these nanoparticles (24). Similar to the findings of the present study, the MIC of ethanolic extract of yew on Bacillus cereus, Escherichia coli, and Pseudomonas aeruginosa was 12.5, 12.5, and 25 ppm.

The antimicrobial effects of watercress extract and the derived micro-emulsion on gram-negative clinical strains were investigated, and the highest zone and micro-emulsion were obtained at a concentration of 8 mg/mL with a diameter of 42 mm. This composition formed a zone with a diameter of 30 mm on the same bacterium at a concentration of 0.1 mg/mL; however, no zone formation was observed on Pseudomonas. The highest effect of the extract, which resulted in the MIC, was observed at 0.01563 mg/mL on Salmonella and for Shigella 0.00625 mg/mL. The MIC of the extract was 0.5 mg/mL for Escherichia coli and Proteus and 0.025 mg/mL for micro-emulsion of both bacteria (25). In the present study, the largest diameter of the growth inhibition zone against Candida albicans was 20 mm.

Medicinal plants have special place in the field of allochemicals, mainly due to their secondary metabolites. In addition, the demand for medicinal compounds has increased, but some of these plants have limited natural habitats, and depending on the environmental and geographical conditions, their collection may be difficult. Researchers have focused on the use of biotechnology techniques to increase the production and productivity of medicinal plants as follows; Low concentration of phytochemicals in plants, limitation of natural resources, increasing degradation of forests, pastures, and green space, extinction of diverse plant species, problems related to domestication and crop cultivation. Biotechnology can provide solutions to increase the efficiency of producing medicinal plants, as renewable sources for drug production, using various sciences such as biology, biochemistry, genetics, etc., and using cell, organ, and porcine culture methods as well as genetic engineering, and molecular markers (8).

Overuse of antibiotics has often led to the growing resistance of bacteria to these drugs. On the other hand, overuse of antibiotics is often associated with side effects in the human body. Because some plants have antimicrobial properties, they can be used to fight specific pathogenic microbes and find harmless alternatives to antibiotics.

On the other hand, in recent years, the effectiveness of antibiotics has decreased as a result of microbial resistance that led to the growth of research intended to develop new antibiotic compounds or to enhance the performance of antibiotics, among which increased attention has been paid to medicinal plants (26-28). Hence, the plants used in the present study can be examined against other microbes to obtain a comprehensive result. However, further studies are needed to determine the best-uncomplicated dose with the highest effectiveness as well as the active ingredient.

Despite their widespread benefits, chemical drugs, including antibiotics, also have side effects. According to the findings of the present study, the yew tree (Taxus baccata L.) was the most useful plant against Candida albicans, Bacillus cereus, and Pseudomonas aeruginosa. Hypericum perforatum L. was also the most useful plant in controlling the growth of Escherichia coli.

This article was achieved based on the material and equipment of agricultural Biotechnology Research Institute, University of Zabol, that the authors are thankful for their support.

Copyright © 2021, Gene, Cell and Tissue. This is an open-access article distributed under the terms of the Creative Commons Attribution-NonCommercial 4.0 International License (http://creativecommons.org/licenses/by-nc/4.0/) which permits copy and redistribute the material just in noncommercial usages, provided the original work is properly cited.
download pdf 2.85 MB Get Permission (article level) Import into EndNote Import into BibTex
Number of Comments: 0