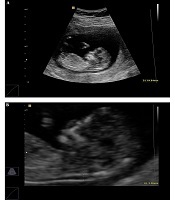 There is evidence that the incidence of trisomy 21 has a direct linear relationship with maternal age, and older women are at a higher risk for giving birth to neonates with Down syndrome (DS).

The present study aimed to evaluate the performance and effectiveness of combined first-trimester screening (FTS) for DS in women of different ages in Southwest Iran.

In this cross-sectional study, FTS was conducted on 7192 pregnant women in the 11th to 13th week of gestational age, referred to the Narges Medical Genetics and Prenatal Diagnosis Laboratory, Ahvaz, Iran. Amniocentesis and cytogenetic analysis were performed in all women with an estimated risk of 1 in 100 and above.

First-trimester screening is an effective method for estimating the risk of DS in women under or over 35 years of age. Although an advanced maternal age is associated with a higher prevalence of DS, clinicians should recommend FTS as the first-line screening method regardless of maternal age.

Trisomy 21, called Down syndrome (DS), is one of the most common clinical syndromes, with a prevalence of one in every 800 - 1000 live births (1). The syndrome is a common genetic cause of intellectual disabilities worldwide, and many DS patients around the world face a variety of additional health issues, including heart defects, hematopoietic disorders, and early-onset Alzheimer disease (2). Furthermore, because babies with congenital anomalies place significant economic, social, and cultural burden on families and societies, the early detection of such defects during pregnancy can prevent the birth of children with disabilities (3). First-trimester screening (FTS), a combination of tests including fetal crown-rump length (CRL), nuchal translucency (NT) thickness, maternal serum free β-human chorionic gonadotropin (β-hCG), and pregnancy-associated plasma protein-A (PAPP-A), is one of the preventive programs adopted as the first-line screening method for DS in many countries (4), with a detection rate of 84%-90% and a false positive rate of 5% (5). However, it is unclear if the wide DS detection rates published in various studies can be applied universally to women of different ages. The effectiveness of FTS in women of different ages has not been adequately studied, suggesting a lower effectiveness in women under 35 years of age (6). The age of 35 years is considered as a threshold in this condition, and until the mid-1980s, prenatal diagnostic tests were only recommended for women older than 35 years. The incidence of DS has been reported to have a direct linear relationship with maternal age, and its prevalence progressively increases at the age of 40 years and over (7). However, about 80% of children with DS are born to mothers under 35 years of age (8).

The present study was performed to evaluate the performance and effectiveness of combined FTS for DS based on maternal age in Southwest Iran.

In this cross-sectional study, a prospective screening was performed to assess the risk of trisomy 21 during the first-trimester of pregnancy, according to the guidelines established by the Fetal Medicine Foundation (FMF) and based on a combination of fetal CRL, NT thickness, PAPP-A, and β-hCG measurement. The screening was conducted from the 11 + 0 to 13 + 6 weeks of gestation on 7192 pregnant women with different ages, referred for prenatal care to the Narges Medical Genetics and Prenatal Diagnosis Laboratory in Ahvaz, Southwest Iran, during May 2014 to March 2015. This study was approved by the Ethics Committee of the Biology Department, Shahid Chamran University of Ahvaz, Iran (no.: 20.6.505). All patients were informed of study aims and protocols and signed a written informed consent. Inclusion criteria included being in the first trimester of pregnancy and filling out an informed consent form. Gestational age, maternal age, weight, parity, polygamy, a history of giving birth to newborns with congenital anomalies, smoking, alcohol consumption, and a history of receiving treatments were recorded in a questionnaire.

Transabdominal and, when necessary, transvaginal ultrasound were performed by an ultrasound specialist to diagnose any major fetal defects and determine fetal CRL and NT thickness. For NT assessment, the fetus should have been in a neutral position, with the head aligned with the spine. Care must be taken to distinguish between fetal skin and the amnion. The widest part of translucency was measured (Figure 1). Serum samples were collected and analyzed to determine the concentrations of free β-hCG and PAPP-A using an automated machine (Kryptor system, Brahms AG, Berlin, Germany). To convert their concentrations into Multiple of the Median (MoMs), free β-hCG and PAPP-A serum levels were divided by expected gestational age-specific medians. Ultrasonographic and biochemical results were recorded in a database provided by the FMF risk calculation software (Logical Medical Systems, London, UK). Finally, the estimated risks of DS were defined in women aged under and over 35 years old. Finally, according to the report retrieved by the software, DS risk was classified into low (over 1:1000), moderate (below 1:1000), and high (below 1:100) categories. After combined FTS, amniocentesis was performed to obtain fetal karyotype in the patients with an estimated risk of below 1:100. Women with low and moderate risks and a family history of genetic diseases underwent elective amniocentesis. All delivery outcomes were reviewed and examined by a pediatrician in order to diagnose trisomy 21 according to physical and developmental problems and the results of the karyotype test. 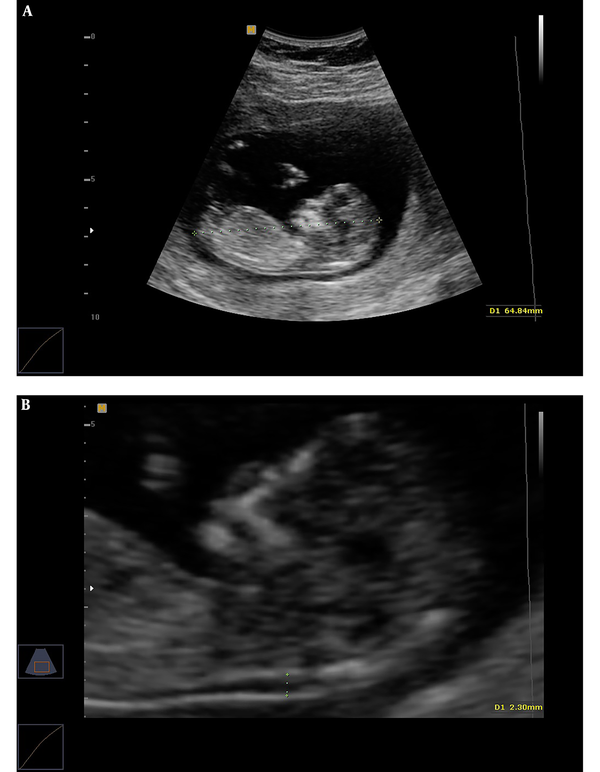 The measurement of fetal crown-rump length (CRL) (A) and nuchal translucency (NT) thickness (B) in the first trimester of pregnancy.

The data were analyzed using SPSS 16.0 software package (SPSS Inc, Chicago, IL). Fetal CRL, NT thickness, as well as maternal PAPP-A and β-hCG serum levels were compared between different age groups using analysis of variance (ANOVA) followed by Tukey’s test. Data were expressed as mean ± SD, and the level of statistical significance was set at P < 0.05. Risk assessment and estimating DS detection rate, as well as the false positive and false negative rates were conducted according to the results of the FMF risk calculation software and presented as percentages in different age groups.

Table 1. The Age Distribution of the Pregnant Women Studied

Table 2. The Means ( ± SD) of Fetal CRL and NT Thickness During the First Trimester of Pregnancy in Women with Different Agesa

Table 3. The Means (± SD) of the Serum Levels and MoM Values of PAPP-A and β-hCG During the First Trimester of Pregnancy in Women with Different Agesa

Screening assessment based on a combination of fetal CRL, NT thickness, and maternal serum PAPP-A and β-hCG at around 11 - 13 weeks of gestation showed that 6.47% (466/7192) of the studied population were at a high risk of DS (Table 4). A significant correlation (r = 0.137, P < 0.001) was observed between maternal age and the high risk of DS based on the combined FTS strategy at around 11 - 13 weeks of gestation. Among 292 (4.06%) women with a high risk of DS, 254 underwent amniocentesis, while 38 cases declined further testing and terminated the pregnancy. Only 317 of the women with a moderate risk of DS (1006/7192) underwent amniocentesis. Moreover, among 5894 low-risk women, 135 underwent amniocentesis. Among 706 women who underwent amniocentesis, 26 abnormal karyotypes were observed (19 cases of trisomy 21, including 17 women at the high and two at the low risk groups for DS, and seven cases of trisomy 18). The total number of false positive cases was 266. Among 5894 women in the low-risk group for DS, two trisomy 21 cases were born, who failed to be detected by FTS.

Table 4. Risk Assessment, Detection Rates and False Positive and False Negative Rates for DS Based on Combined Screening Tests During the First Trimester of Pregnancy in Women with Different Ages

The risk of a baby being born with anomalies and structural defects is 3% to 5% for each pregnancy (9). At the forefront of these disorders is DS, a genetic disease that is often non-inherited. Although having a child with DS is directly related to the mother’s age, it has been reported that more than 60% of children with trisomy 21 are born to pregnant women aged under 35 years. Therefore, the early diagnosis of DS should not be only focused on pregnant women over 35 years of age, and screening tests in the first trimester of pregnancy are essential for mothers younger than 35 years of age as well (6, 10). The present study evaluated the performance of FTS in assessing the risk of trisomy 21 during the first trimester of pregnancy in women under and over 35 years of age in Southwest Iran. The overall detection and false positive rates of FTS were calculated using a 1:100 risk cut-off value. In the present study, among 7192 cases screened, there were a total of 5894 cases with FTS risk scores greater than 1:1000, 1006 cases with FTS risk scores between 1:100 and 1:1000, and 292 cases with FTS risk scores lower than 1:100.

One of the limitations of our study was that we did not obtain karyotypes from the women who declined further testing and terminated their pregnancies. In other words, the prevalence of DS might have been underestimated in the present study. Moreover, since people with different ethnicities live in Southwest Iran, further studies are needed to divulge the possible role of other parameters in determining the efficiency of DS screening.

This study provided first estimates on the maternal age-specific prevalence of trisomy 21 in women of different ages in Ahvaz, Southwest Iran. Our data showed that the prevalence of DS was 2.64 per 1000 births in this region. The prevalence of DS was 1.95 vs. 6.67 per 1000 cases in pregnant women under 35 years of age and older, respectively. Our findings also demonstrated that FTS was an effective method of screening for trisomy 21 in women under 35 years of age and older. Accordingly, FTS delivered the overall detection rate of 89.47% and the false-positive rate of 3.82% for DS. The present study showed a positive correlation between maternal age and the prevalence of DS. However, regardless of maternal age, clinicians should recommend FTS as a first-line screening method for DS and provide appropriate training programs about these screening methods for early DS diagnosis.

The authors would like to thank the Vice Chancellor for Research of Shahid Chamran University of Ahvaz for the research grant: # 94/3/02/31579.

Copyright © 2021, Gene, Cell and Tissue. This is an open-access article distributed under the terms of the Creative Commons Attribution-NonCommercial 4.0 International License (http://creativecommons.org/licenses/by-nc/4.0/) which permits copy and redistribute the material just in noncommercial usages, provided the original work is properly cited.
download pdf 1.44 MB Peer Review Comments ( 121.47 KB) Get Permission (article level) Import into EndNote Import into BibTex
Number of Comments: 0