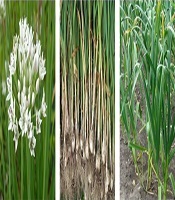 Identification of Antibiotic-Resistant Genes and Effect of Garlic Ethanolic Extract on Mycobacterium tuberculosis Isolated from Patients in Zabol, Iran

Garlic (Allium sativum) was collected from Zabol, and the ethanolic extract of garlic leaf was obtained. In this study, 50 strains of Mycobacterium tuberculosis were obtained from the patients in Zabol. The minimum inhibitory concentration (MIC) and minimum bactericidal concentration (MBC) were determined. Some antibiotics, such as isoniazid, pyrazinamide, ethambutol, amikacin, streptomycin, and rifampicin, were used for positive control. Genomic deoxyribonucleic acid was extracted by the sodium dodecyl sulfate method. Furthermore, the presence of antibiotic-resistant genes, namely KatG, PncA, embC, embA1, embA2, embB1, embB2, rrs, rpsL, and ropB, in Mycobacterium tuberculosis was investigated using polymerase chain reaction.

The varieties of garlic have been used since many centuries ago as spices, food flavors, and medications in traditional medicine for treating various types of diseases (1). Garlic has antibacterial, anti-cancer, antioxidant, and anti-inflammatory properties, reduces blood sugar, and protects the cardiovascular system. The antibacterial effects of garlic on different bacteria have also been reported (2).

Tuberculosis is one of the global worst diseases, which is ranked seventh in the world of diseases in 1990 and is expected to remain at the seventh place in the world in 2020, according to the Disability-Adjusted-Life Year indicator. According to the World Health Organization, one-third of the world population is infected with tuberculosis, and 8 million and eight hundred thousand new cases are infected each year. Annually, about 203 million individuals die from tuberculosis. The cause of this disease is basil Mycobacterium tuberculosis, intruding into the airborne contaminated with this basil in the lungs and causing tuberculosis.

Therefore, the treatment of MDR tuberculosis is associated with many problems, and the identification of MDR patients is essential in accelerating the treatment process. With this background in mind, the current study aimed to evaluate the effect of garlic extract and isolation of resistant genes to antibiotics in Mycobacterium tuberculosis isolated from patients in Zabol, Iran.

Garlic (Figure 1) was collected from Zabol (coordinates: 31°01’43”N 61°30’04”E), Sistan and Baluchestan, and the species was described in the botanical laboratory of Zabol University. In this study, 10 g of Ggarlic medicinal plant leaf tissue (Figure 1) in the shade and vicinity of dry air, milling, then soaked and shaked in 100 cc of ethanol at room temperature for 48 h. After the desired time, the extracts were refined; then, the solvent was evaporated at a temperature below 40°C by rotary evaporation, and the remainder after drying was stored in a refrigerator at 4°C for experiments (5).

Allium sativum was properly dried and pulverized into a coarse powder (6). Each 20 g ground powder was soaked in 60 mL ethanol 95%, separately for 1 day. After 1 day of the dissolving process, the materials were filtered (Whatman grade 1 filter paper). Subsequently, the filtrates were evaporated using a rotary evaporator. Finally, 0.97 g of the dried extract was obtained and then stored at 4°C in an air-tight screw-cap tube.

For this study, 30 patients were selected referring to University of Zabolin 2020, and then the rest of the experiments were performed at Zabol University of Medical Sciences. In this experimental study, 30 patients with tuberculosis participated who recovered after 3 months of treatment with anti-tuberculosis drugs. We received their phlegm after obtaining consent. After the collection of Sputum from patients having TB, a clinical examination was performed. Tuberculin test was performed for the patient, and sputum sample was performed on Loonstein Johnson solid medium. The lamellas were examined by light microscopy after the Ziehl-Neelsen method. The samples of acid-resistant red bacilli were reported positive, and each sample was cultured in two Lyons-Stein Johnson tubes. After 6-8 weeks, the culture media were examined for the presence of colonies of cream color (i.e., cauliflower of Mycobacterium tuberculosis). After preparing the lam from these colonies, the coloring was performed by the Ziehl-Neelsen method. Again, the laminae were investigated in terms of the presence of basil red acid-resistant bacteria. The minimum inhibitory concentration (MIC) and minimum bactericidal concentration (MBC) were determined. In this study, some antibiotics, such as isoniazid, pyrazinamide, ethambutol, amikacin, streptomycin, and rifampicin, were used for positive control.

The deoxyribonucleic acid (DNA) of Mycobacterium tuberculosis was extracted by the sedimentation method (7). After DNA deposition in 50 µL of solvent buffer, it was dissolved, and a confirmatory polymerase chain reaction was used (7). The current study also investigated the presence of antibiotic-resistant genes (i.e., KatG, PncA, embC, embA1, embA2, embB1, embB2, rrs, rpsL, and ropB) in Mycobacterium tuberculosis (Table 1). Genomic DNA extraction was performed based on the sodium dodecyl sulfate (8) method, and three samples were extracted from each bacterium.

Following the investigation of the presence of antibiotic-resistant genes in Mycobacterium tuberculosis, it was determined that it contains KatG, PncA, embC, embA1, embA2, ropB, rpsL, rrs, embB2, and embB1 genes (Figures 2 and 3). The resistance of Mycobacterium tuberculosis against antibiotics is based on the presence of resistant genes, and each of KatG, PncA, embC, embA1, embA2, embB1, embB2, rrs, rpsL, and ropB genes causes bacterial resistance to isoniazid, pyrazinamide, ethambutol, amikacin, streptomycin, and rifampicin, respectively; therefore, in this study, it was determined that the bacterial levels of resistance to these antibiotics were 40%, 23.3%, 33.3%, 26.6%, 63.3%, 40%, 76.6%, 56.6%, and 81%, respectively (Table 3). 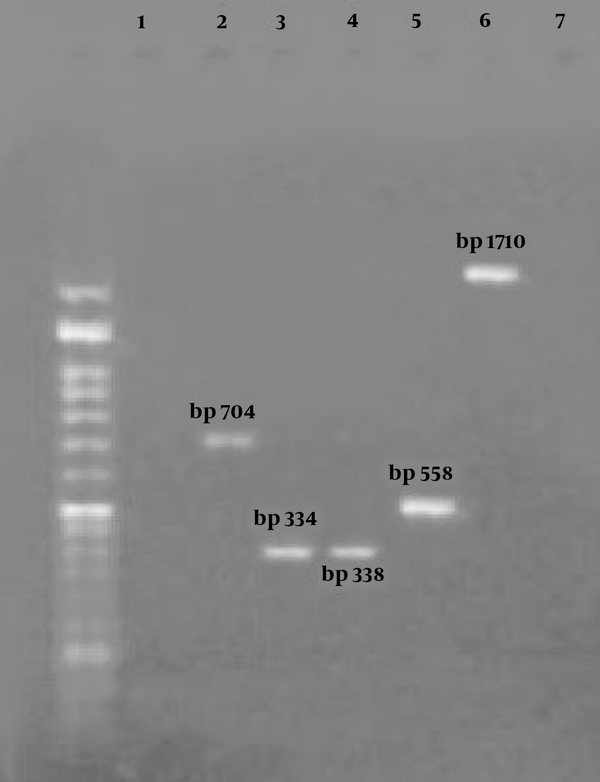 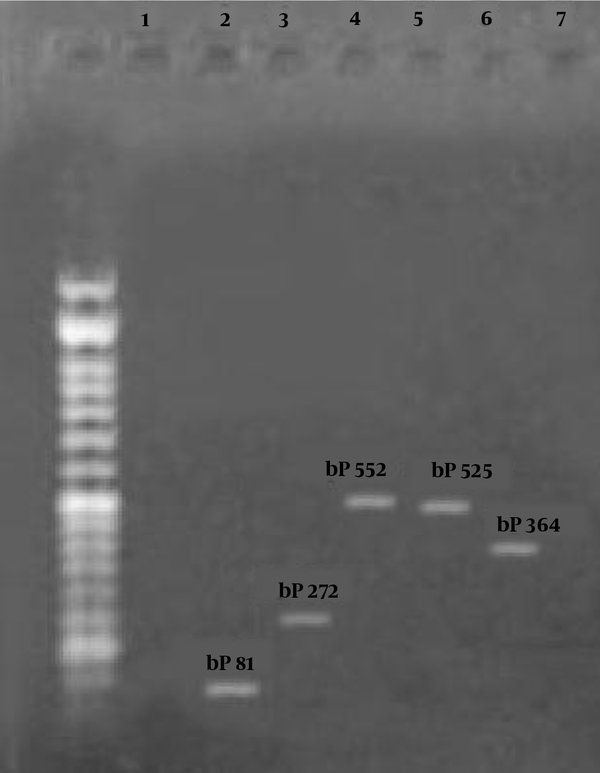 Based on the literature, it was concluded that Streptococcus pyogenes was the most sensitive bacterium to the inhibitory effect of garlic aqueous extract. In addition, Pseudomonas aeruginosa showed the least sensitivity. However, in general, fungal microorganisms have shown the least sensitivity to the aqueous extract of garlic. Furthermore, the MIC of the extract (except for two cases) was highest only in 60% of dilutions (13). In the present study, the ethanolic extract of garlic was effective in Mycobacterium tuberculosis and even the MIC was equal to 3.25 ppm.

Bacteria are thought to have acquired multidrug resistance via the horizontal transfer of resistance genes through mobile genetic elements, such as integrons (15). The evidence that drug resistance may contribute to the global predominance of Beijing strains was demonstrated in a study (16). The aforementioned investigation showed the highest levels of mutations in rpoB, katG315, and embB306 among M. tuberculosis Beijing strains. The present study also showed an association between phenotypic drug resistance and resistant genes. Resistance to one medicine increases the danger of obtaining protection from another medicine. Longitudinal studies with consecutive isolates from single patients may help to determine which mutations generally occur first.

Evaluation of the effect of second-line drugs on mycobacterial strains has become very important due to the prevalence of drug resistance, especially multidrug resistance among Mycobacterium tuberculosis strains in recent years (18). Therefore, further studies are needed to examine this important issue.

Another study examined the antibacterial effects of some plant extracts on Yersinia ruckeri in vitro. Based on the results, it was concluded that the minimum growth inhibitory concentrations of angelica, fennel, pomegranate, green tea, nettle, and garlic extracts for Yersinia ruckeri 400, 75, respectively. 250, 250, 75 and 150 µg/mL. The minimum lethal concentrations of the aforementioned extracts were 610, 100, 500, 250, 150, and 250 µg/mL and the diameter of the growth inhibition bacterium were 17.6 ± 0.6 (mm), respectively, 23.6 ± 1.2, 20.4 ± 0.9, 18.8 ± 0.7, 21.2 ± 1.3 and 22.6 ± 1.1 (mm) were obtained. In this study, fennel, nettle, and garlic extracts showed good antibacterial effects on Yersinia ruckeri. Overall, it was concluded that the extracts of fennel, nettle, and garlic, after further studies, could be good alternatives to common commercial antibiotics for the treatment of systemic infections caused by Yersinia ruckeri (19). Based on the previous results (19) and results of this study, it can be said that the ethanolic extract of garlic is more effective than those of angelica, pomegranate, green tea, and nettle.

Another study examined the antibacterial effects of some essential oils of native plants on Streptococcus iniae in vitro. Based on the results, it was concluded that the MBC of essential oils of zolang, pomegranate, thyme, black cumin, and garlic on Streptococcus iniae 1, 1 <, 0.25 respectively, were 1, 1 <, 0.25, 0.12 and 0.5 µg/mL, respectively. The MIC values for these essential oils were 0.5, 0.5, 0.06, 0.06 and 0.12 µg/mL, respectively. The diameter of inhibitor zone were 27.3 ± 1.7, 22.8 ± 1.1, 32.8 ± 1.3, 17 ± 0.4 and 18.5 ± 0.7 (mm), respectively (21). It can also be concluded that the antimicrobial properties of garlic against Streptococcus iniae are lower than those reported for thyme, indicating the different effects of medicinal plants and even solvents on different types of bacteria and fungi (22, 23). Therefore, it is recommended to use medicinal plants against bacteria and fungi and pay attention to the type of solvent and plant and not only to the results of similar studies.

Another investigation studied the effect of garlic extract on Staphylococcus aureus. The results showed that the antimicrobial effect in chloroform extract with a mean diameter of 27 ± 3% mm was significantly higher than that of aqueous extract with a mean diameter inhibition zone of 17 ± 2 mm. The highest sensitivity of antibiotics to fancicin was observed as 58.199% (24) indicating the different effects of solvents on antimicrobial properties.

Despite the large number of synthetic or natural inhibitors derived from plant extracts, none have been approved for clinical use. According to reports, there is an inhibitory effect on the reduction of MIC of antibiotics; therefore, it seems necessary to perform further studies in this regard. It is also necessary to identify resistant genes and find a solution to prevent and reduce resistance. This can be achieved by reducing the use of common antibiotics and performing further studies on the effects and side effects of using inhibitors instead of antibiotics.

Copyright © 2021, Gene, Cell and Tissue. This is an open-access article distributed under the terms of the Creative Commons Attribution-NonCommercial 4.0 International License (http://creativecommons.org/licenses/by-nc/4.0/) which permits copy and redistribute the material just in noncommercial usages, provided the original work is properly cited.
download pdf 3.48 MB Peer Review Comments ( 155.04 KB) Get Permission (article level) Import into EndNote Import into BibTex
Number of Comments: 0