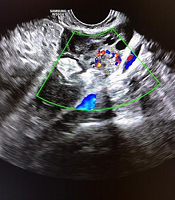 Heterotopic Pregnancy After In Vitro Fertilization Ending with a Successful Term Labor, a Case Report

Heterotopic pregnancy is defined as the simultaneous presence of intrauterine and ectopic pregnancies, manifesting with abdominal pain and vaginal bleeding. Previous tubal surgeries and pelvic inflammatory diseases increase the risk of this anomaly. In this case report, heterotopic pregnancy after in vitro fertilization (IVF) in a 32-year-old female was reported.

A 32-year-old female was referred to our medical center, presenting with abdominal pain and vaginal bleeding. She had IVF pregnancy seven weeks ago without a history of any other illness or consuming a specific drug. According to ultrasound results, heterotopic pregnancy was diagnosed. Therefore, we decided to perform the salpingectomy and laparotomy of the fetus. The patient had a normal delivery via cesarean section at term (the 38th week of pregnancy). The patient remained stable without any further referral for the mentioned condition.

Due to the importance of heterotopic pregnancy and its prevalence among women using fertility procedures and assisted reproduction techniques (such as IVF), even in the presence of a gestational sac containing yolk sac and after the detection of the embryo in the endometrium cavity, the adnexa should be well checked to rule out heterotopic pregnancy to obviate the risk of abortion and other fatal outcomes.

Heterotopic pregnancy refers to the coexistence of intrauterine and extrauterine pregnancy. At its early stages, heterotopic pregnancy presents with nonspecific features mimicking other abnormal manifestations of pregnancy (1). Although the phenomenon is rare, it occurs more frequently nowadays and may be associated with life-threatening complications such as ruptured uterus and massive bleeding. Previous tubal surgeries and pelvic inflammatory diseases increase the risk of this anomaly (2). Surgery may successfully save most of these types of pregnancies and therefore embryos if the condition is diagnosed early. Careful clinical or ultrasound examination of adnexa in asymptomatic patients is necessary and helpful for achieving an accurate diagnosis and formulating a logical therapeutic plan (3).

We here presented a female with heterotopic pregnancy after undergoing IVF. In addition to ultrasound assessment, salpingectomy and laparotomy of the fetus were performed, leading to a normal term delivery.

A 32-year-old pregnant female was referred to the emergency department of our medical center with abdominal pain extending to feet and vaginal bleeding. She had undergone IVF pregnancy seven weeks ago and had no history of any other illness or consuming a specific drug. Some of her vital signs were stable, including blood pressure (110/70 mmHg) and body temperature (38°C), but her pulse rate was high (110/bpm). The patient had a generalized abdominal tenderness but no dyspnea. Laboratory evaluation revealed that hemoglobin and hematocrit levels were lower than normal (6 g/dL and 19.1%, respectively). Other laboratory parameters, including white blood cell count, blood urea nitrogen, mean corpuscular volume, creatinine, and uric acid, were within normal ranges.

Ultrasound revealed an intrauterine gestational sac containing the yolk sac and a fetal pole with a normal heart activity within the endometrial cavity. The yolk sac had a normal size and shape. The gestational age based on a crown lump length of 12 mm was estimated seven weeks ± 3 - 4 days (Figure 1). The trophoblastic tissue was circular. There was no subchorionic hematoma, and the Internal orifice of the uterus was closed. Ovaries were normal in size and shape. A 14 × 11 mm isoechoic ringlike lesion was visualized in the left adnexa (Figure 2). Color doppler also demonstrated a ring of fire sign (Figure 3). Moreover, a 40 × 22 mm isoechoic irregular-shaped lesion was also visualized around it, which was suggestive of a clot (Figure 4). Also, large amounts of free fluid with internal echo were illustrated in the abdominal and pelvic cavities, compatible with hemoperitoneum and suggestive for ruptured ectopic pregnancy (Figure 5). 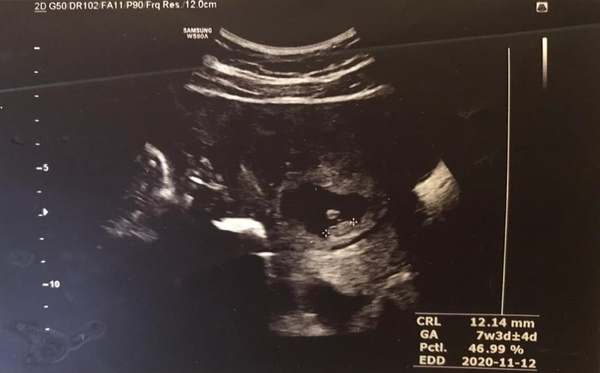 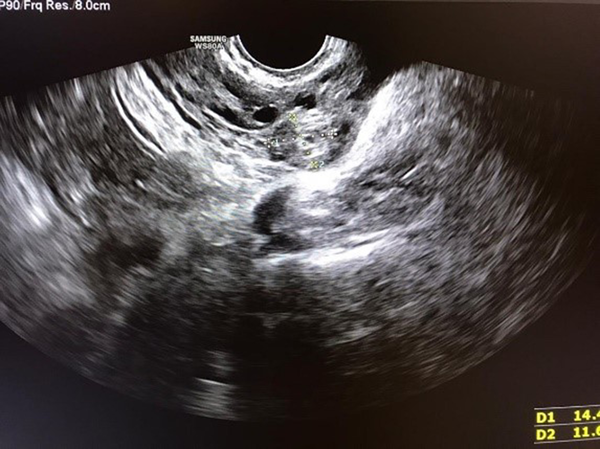 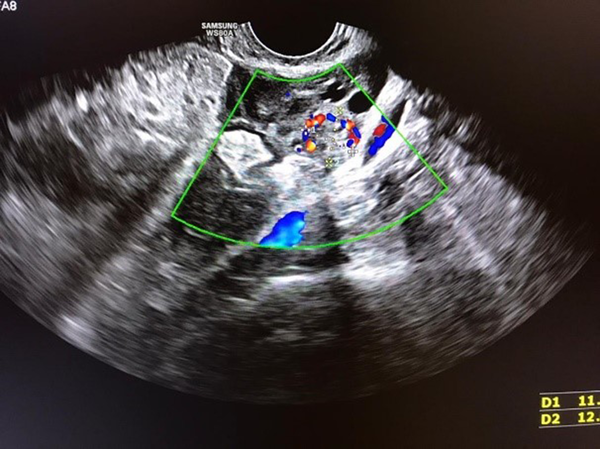 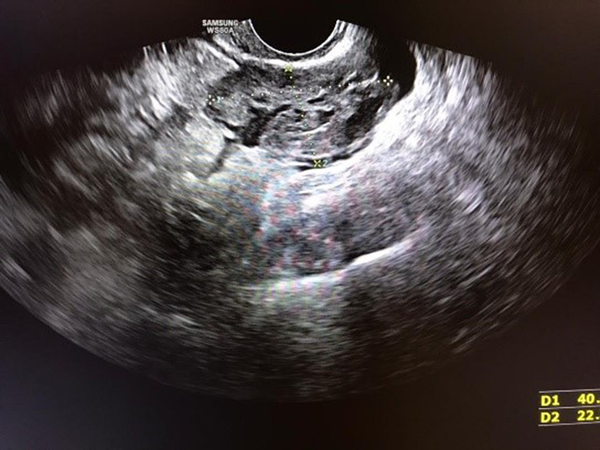 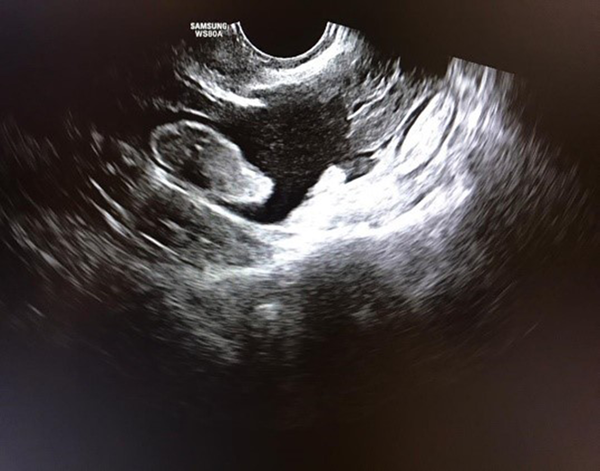 The prevalence of heterotopic pregnancy is estimated to be 1 - 3% in the women undergoing assisted reproductive technologies, especially ovulation induction pregnancy through IVF, which was the case in the present report (5). Assisted reproduction technologies have increased the incidence of concurrent intrauterine and extrauterine pregnancies, which has been reported to be 9 in 10000 pregnancies (6).

The most common site of heterotopic pregnancy is the ampulla portion of the fallopian tube, as it was the case in our patient, which is diagnosed when symptoms present. Patients with previous tubal surgeries are at an increased risk for this condition (7). The history of implementing an intrauterine device in patients with pelvic inflammatory diseases increases the risk of ectopic pregnancy (8). Our patient presented about five weeks after IVF with no noticeable past medical history.

Heterotopic pregnancy is very uncommon in spontaneously occurring pregnancies and is associated with increased maternal and child mortality. According to this, careful clinical and ultrasound investigations, especially adnexa examination findings, are necessary in asymptomatic patients. Due to the importance of heterotopic pregnancy and its prevalence among the patients using fertility medications and assisted reproduction techniques, such as IVF, the adnexa should be well checked even after detecting a gestational sac containing the yolk sac and observing an embryo in the endometrial cavity to rule out heterotopic pregnancy (3).

Finally, salpingectomy and laparotomy of the fetus were performed, leading to a normal and term (the week 38th) delivery via cesarean section. During follow-up, the patient and her baby remained stable without any further referrals for the mentioned condition.

Considering the importance of heterotopic pregnancy and its high incidence among the patients using assisted reproduction techniques such as IVF, clinicians should pay special attention to carefully check the adnexa, even after discerning a gestational sac containing the yolk sac and detecting an embryo in the endometrial cavity, to rule out heterotopic pregnancy.

Copyright © 2021, Gene, Cell and Tissue. This is an open-access article distributed under the terms of the Creative Commons Attribution-NonCommercial 4.0 International License (http://creativecommons.org/licenses/by-nc/4.0/) which permits copy and redistribute the material just in noncommercial usages, provided the original work is properly cited.
download pdf 16.28 MB Peer Review Comments ( 124.43 KB) Get Permission (article level) Import into EndNote Import into BibTex
Number of Comments: 0