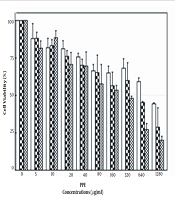 Breast cancer is the most common female cancer that, despite recent progress, its existing therapies do not have sufficient efficiency, and scientists are trying to find complementary therapies. Medicinal plants, such as pomegranate (Punica granatum L.), attract a great deal of attention in this regard.

The present study aimed to assess the anticancer effects of pomegranate peel alcoholic extract (PPE) in the mouse cellular model (4T1) of breast cancer and investigate the related molecular mechanism of antiproliferative effects of the extract through the evaluation of the expression level of apoptosis genes (ie, BAX and BCL2).

For the accomplishment of the study objectives, after the preparation of PPE, an evaluation of cellular cytotoxicity was carried out using the 3-(4, 5-dimethylthiazol-2-yl)-2, 5-diphenyltetrazolium bromide (MTT) assay. According to the MTT assay, the cells were treated for 24 h with selective doses of the extract. Then, ribonucleic acid extraction, complementary deoxyribonucleic acid synthesis, and gene expression analysis of BAX and BCL2 using real-time polymerase chain reaction were performed in this study.

The results showed that PPE reduced cancer cell viability in a dose- and time-dependent manner. The molecular analysis indicated that observed cell death could be due to an increase in the BAX/BCL2 ratio.

Overall, PPE can be proposed as a potential complementary therapy for breast cancer. However, further studies on animal models and clinical trials are needed to verify the clinical usage of such complementary drugs.

Cancer is the second leading cause of nonaccidental deaths worldwide, affecting millions of individuals each year (1). Breast cancer is one of the most malignant cancers that can spread to different body parts, such as bones, lungs, brain, and liver. This cancer is the most common female cancer and the second leading cause of death among women (2).

The inhibition of breast cancer is one of the essential clinical goals; however, most drugs available for the treatment of breast cancer are not very effective due to their single-purpose nature, high toxicity, very high cost, and especially uncertainty about the recurrence of a cancerous mass and the lack of inhibition of metastasis and cell invasion. For more effective treatment of patients with breast cancer, it is necessary to pay attention to drugs that can target several purposes (3).

The range of use of medicinal plants and their applications is very vast, from simple diseases to complex diseases, such as autoimmune disorders and cancers (4). Plants effectively inhibit free radicals by containing natural antioxidants, such as anthocyanins, flavonoids, and polyphenols, thereby playing an important role in the prevention and treatment of various cancers (5). In the last half-century, extensive studies have shown that many fruits, vegetables, and spices can interfere with several cancer-related signaling pathways (6).

The therapeutic effects of extracts of all parts of the fruit of pomegranate (Punica granatum L.), a plant native to the Middle East, concerning a variety of chronic diseases (e.g., cardiovascular disorders, diabetes, and cancer), have been reported from human clinical trials (10-13). Pomegranate peel, as a major part of the fruit, has therapeutic properties and is an important source of bioactive compounds, such as phenolics, flavonoids, ellagitannins, and proanthocyanidin compounds (13).

This study aimed to investigate and compare the antioxidant and anticancer effects of pomegranate peel extract in a mouse model of breast cancer and study the molecular mechanisms related to the antiproliferative and apoptotic effects of the extract by evaluating BAX-BCL2 gene expression.

For the preparation of pomegranate peel alcoholic extract (PPE), a dried plant sample was ground. Then 20 g of the ground sample was stirred with 200 mL of 98% ethanol for 24 h at room temperature. Then, the solution was filtered by filter paper, and the obtained solution was transferred to a rotary for concentrating and removing the solvent at 70°C (14).

For the evaluation of the cytotoxic effect of pomegranate extract on cancer cells and the determination of its effective concentration (ie, the 50% inhibitory concentration [IC50]: inducing 50% of cell death), the MTT assay was used according to a previous study (17). After determining the absorbance of the solution at 570 nm using the ELISA reader (BioTek, Epoch, USA), the percentage of living cells was calculated using the following formula. The IC50 was measured using the dose- and time-dependent curves.

3.5. Extraction of RNA and Real-Time PCR

Total ribonucleic acid (RNA) was extracted from the cells using RNX Plus Kit (SinaClon, Iran). The quantitative analysis of the extracted RNA was performed using a NanoDrop (BioTek, Epoch, USA) in the absorbance ratios of 260/280 and 260/230 nm. Agarose gel (2%) electrophoresis was used to evaluate the quality and integrity of the extracted RNA. Complementary deoxyribonucleic acid synthesis was performed via Pars Genome kit (Iran). The primers used in this study (Table 1) were designed using the National Center for Biotechnology Information website and online OligoAnalyzer software. Real-time polymerase chain reaction (PCR) was carried out using the ABI Step One™ Real-Time PCR System (Applied Biosystems, Foster City, CA, USA) with SYBR Green Kit as 10 min at 95°C (40 cycles of 15 sec at 95°C and 30 sec at 60°C, followed by a melting curve analysis step [15 sec at 95°C, 60 sec at 60°C, and 15 sec at 95°C]) (17). Glyceraldehyde 3-phosphate dehydrogenase was used to normalize the relative expression. 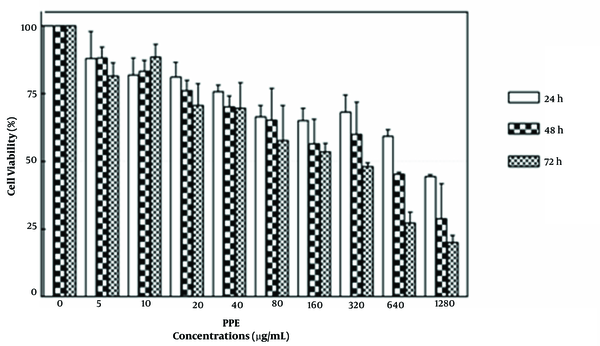 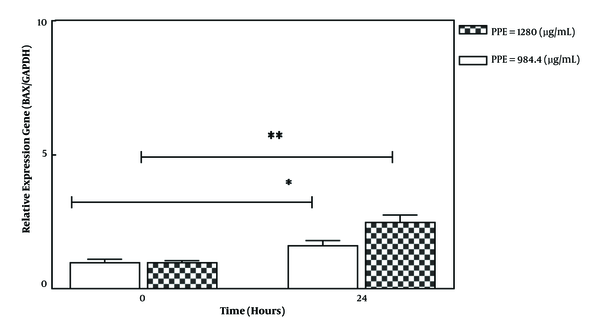 The treatment of 4T1 cancer cells with selective PPE concentrations (IC50 concentration: 984.4 and a higher concentration: 1280 μg/mL-1) for 24 h could significantly reduce the expression of the BCL2 anti-apoptotic gene in a treatment concentration-dependent manner (Figure 3). The anti-apoptotic protein Bcl2 inhibits apoptosis by inhibiting the release of cytochrome C from the mitochondrial membrane. In general, an increase in the BAX/BCL2 ratio is one of the important indicators of apoptotic induction (18). 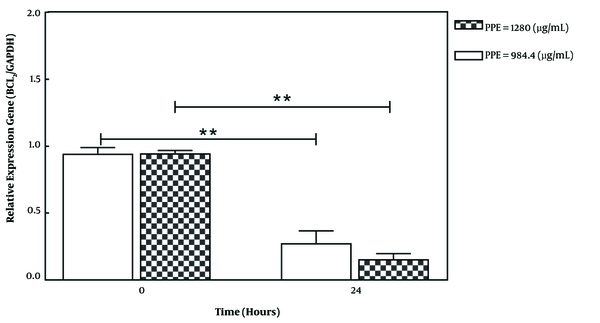 Breast cancer is one of the most common cancer among women worldwide. Despite valuable efforts on breast cancer therapy, the metastatic form of this cancer is still a big challenge. In recent decades, researchers try to develop novel therapeutic methods to solve this problem. Complementary treatment using medicinal plants that target apoptosis and metastatic pathways is one of the devised therapeutic methods in this regard. The current study aimed to assess the antiproliferative effects of PPE and evaluate its molecular mechanism. To this end, the MTT method was used to assess PPE cytotoxicity. As previously described in the results section, PPE had a significant cytotoxic effect on the 4T1 cell line.

The results obtained in this study are consistent with the results of previously published reports. In a study conducted in 2019 (19), it was shown that PPE in different concentrations significantly reduced the survival of the cervical carcinoma HeLa cells, with IC50 levels of 200, 100, and 10 μg/mL-1. In the aforementioned study, biochemical assays indicated that the toxicity effect of PPE might be due to the presence of polyphenolic compounds. The suppressed proliferation and induced cancer cell apoptosis by pomegranate peel extract were also reported in thyroid cancer cell lines (20). A study performed by Kolahi et al. showed that the extract of pomegranate spongy tissue could reduce the survival of colon cancer cells Caco-2. In the aforementioned study, the anticancer effect was attributed to the presence of flavonoid, tannin, alkaloid, terpenoid, aldehyde, ketone, and vitamin C compounds and the absence of steroid, saponin, and protein compounds in pomegranate spongy tissue (21).

Sharifiyan et al. also reported that the treatment of B16f10 melanoma cells with the ethanolic extract of pomegranate flowers and isolated ursolic acid showed significant antiproliferative activity after 48 and 72 h (22). Moreover, a study conducted on the cytotoxicity of pomegranate seed extract on the human breast cancer cell lines MCF-7 and MDA-MB revealed that this extract could significantly reduce the survival of these cancer cells (23). After 24, 48, and 72 h of treatment with pomegranate seed oil, IC50 values in the MCF-7 cell line were 1150, 742, and 731 μg/mL-1, respectively, and in the MDA-MB cell line were 700, 842, and 588 μg/mL-1, respectively.

In the molecular section, real-time PCR was carried out to evaluate the alternation of apoptotic gene expression levels. BAX and BCL2 were selected as apoptosis genes for this study due to their known roles in cancer progression. Numerous studies showed that the modulation of the BAX/BCL2 ratio could be one of the effective mechanisms of anticancer drugs. The data of the present study indicated that the treatment of cancer cells with PPE selective doses could increase the BAX/BCL2 ratio and induced apoptosis.

Overall, the results of this study showed that PPE can induce the death of breast cancer cells due to inducing apoptosis by an increase in the BAX/BCL2 ratio. Since the suppression of apoptosis is one of the main mechanisms of carcinogenicity and drug resistance, its induction can play an important role in suppressing the growth and proliferation of cancer cells and reducing drug resistance. Therefore, PPE can be used as a complementary therapy combined with conventional chemotherapy drugs. The use of such complementary drugs can minimize the undesired side effects of chemotherapy drugs by reducing the need for high doses. However, further studies on animal models and clinical trials are needed to verify the clinical usage of such complementary drugs.

Copyright © 2021, Gene, Cell and Tissue. This is an open-access article distributed under the terms of the Creative Commons Attribution-NonCommercial 4.0 International License (http://creativecommons.org/licenses/by-nc/4.0/) which permits copy and redistribute the material just in noncommercial usages, provided the original work is properly cited.
download pdf 922.39 KB Get Permission (article level) Import into EndNote Import into BibTex
Number of Comments: 0