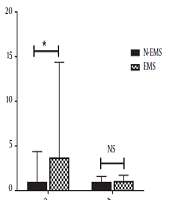 Endometriosis is one of the common gynecological diseases and can lead to pelvic pain, dysmenorrhea, dyspareunia, and infertility in women. Thus, accurate and early diagnosis is a pivotal issue and an essential need for managing this disorder. At the present, the gold standard diagnostic method for endometriosis is laparoscopic surgery that is an invasive method and can lead to delay in diagnosis. Thus, there is an immediate necessity to search for non-invasive diagnostic biomarkers, such as blood-based ones.

Matrix metalloproteinase-9 (MMP-9) and vascular endothelial growth factor-A (VEGF-A) have essential roles in the pathogenesis of endometriosis. Therefore, in this study, we evaluated the plasma mRNA levels of MMP-9 and VEGF-A, as potential non-invasive diagnostic biomarkers for endometriosis.

This study included 48 women (24 cases and 24 controls) who underwent laparoscopy for suspected endometriosis. Preoperative plasma samples were collected, and after RNA extraction, the levels of MMP-9 and VEGF-A mRNAs were determined by reverse transcription-quantitative polymerase chain reaction (RT-qPCR).

Endometriosis is a debilitating and chronic disease among women. In this disorder, the endometrial tissue grows in ectopic locations. It is diagnosed in approximately 10-15% of reproductive-aged women and 35-50% of infertile women. In addition, it is observed in 50-70% of women with pelvic pain (1). The common signs of endometriosis comprise pelvic pain, dysmenorrhea, dyspareunia, and infertility. Thus, it can influence the quality of life and impose health-related costs (2).

Extracellular circulating RNAs in biological fluids such as plasma, urine, and saliva are becoming optimistic non-invasive and cost-effective diagnostic tools (6). A previous study showed the capacity of some miRNA panels as blood-based non-invasive biomarkers for endometriosis (7), and some studies have suggested the usefulness of plasma mRNAs as biomarkers for different cancers (8-11). Accordingly, circulating mRNAs in serum may be helpful non-invasive tools for the diagnosis of endometriosis.

According to previous investigations, matrix metalloproteinase-9 (MMP-9) and vascular endothelial growth factor-A (VEGF-A) make an essential contribution to the pathogenesis of endometriosis (12, 13). Also, the mRNAs of these genes are overexpressed in endometrial lesions in women with endometriosis (14, 15). The MMP-9 gene encodes a matrix metalloproteinase involved in extracellular matrix (ECM) degradation (16). This feature is vital for the invasion of the endometrial tissue to ectopic locations (17). The VEGF-A gene encodes a factor essential for angiogenesis; a process that is necessary for the survival and propagation of ectopic endometrial lesions (18). Some studies have detected the mRNAs of these genes in the peripheral blood of endometriosis patients (19, 20). However, the diagnostic potential of these mRNAs circulating in the plasma of endometriosis patients is uncertain.

The aim of this study was to quantify the mRNA levels of MMP-9 and VEGF-A in endometriosis patients’ plasma samples by RT-qPCR.

The study population consisted of 48 women with suspected endometriosis referred to a gynecologist with complications such as dysmenorrhea or pelvic pain. All the patients were scheduled to undergo laparoscopy and signed written informed consent before surgery. This study was approved by the Research Ethical Committee of Tehran University of Medical Sciences (IR.TUMS.MEDICINE.REC.1398.579). Before surgery, 5 mL of blood was obtained from each participant and transferred into a tube containing EDTA as an anticoagulant. Then blood samples, without delay, were transferred to the laboratory for subsequent processing and plasma separation. According to the gold standard for endometriosis diagnosis (direct visualization of lesions in laparoscopic surgery and confirmation by pathological assessment of the tissue), the patients were categorized into two groups: 24 patients with a confirmed diagnosis of endometriosis (as the case group) and 24 patients without endometriosis (as the control group). Endometriosis stage was defined based on the guidelines of the American Society of Reproductive Medicine (ASRM).

The characteristics of study participants, including the menstrual cycle phase and medical background, were recorded in a clinical questionnaire based on their medical records. Moreover, none of the patients received preoperative treatments, such as hormone therapy, which was regarded as one of important inclusion criteria due to the possible effects of drugs on gene expression. In addition, all the participants were in reproductive age and referred to a gynecologist with endometriosis symptoms. Patients with a previous diagnosis of diseases such as cancer, autoimmune diseases, and endocrine disturbances (polycystic ovarian syndrome, etc.) were excluded from this study.

By centrifugation (at 5000 rpm and then 1500 rpm for 15 min at 4 ºC), plasma samples were initially separated from whole blood. Thermo Scientific Nanodrop 2000 was used to measure plasma quality at 414 nm for detecting hemolysis in samples. Then the plasma samples that had no hemolysis were stored at -80 °C. The TRIzol reagent (RiboEx LS, GeneAll, Korea) was used to isolate total RNA from 400 uL plasma. Afterward, the RNA samples were subjected to standard ethanol precipitation, and the pellet was resuspended in 10 µL of RNAase-free water. Finally, the quality and quantity of the extracted RNAs were appraised by a spectrophotometer.

The extracted RNA samples were converted to cDNA using a Reverse Transcription kit (Geneall, Korea) according to the manufacturer’s protocol. The mRNA levels of MMP-9 and VEGF-A were measured by SYBR Green RealQ Plus 2x Master Mix Green (Ampliqon, Denmark) using Roche LightCycler® 96 System. Normalization was carried out employing β-Actin as a reference gene. The reactions included an initial step at 95°C for 30 sec, followed by 40 cycles of amplification; 95 °C for 10 s (denaturation), 60 °C for 15 s (annealing), and 72 °C for 30 s (extension). The qRT-PCR reaction mixture consisted of 5 μL SYBR Green master mix, 1 µL of each of forward and reverse primers (primer concentration: 5 pmol), 1 µL of target cDNA, and 2 µL sterile water in a total volume of 10 µL. Each reaction was performed in duplicate. The specificity of RT-qPCR amplification was confirmed by melting curve analysis and observing a single peak. The 2−ΔΔCq method was used for calculating the relative expression of each target mRNA. The sequences of the primers used in this study have been represented in Table 1.

Table 1. The Sequences of the Primers Used for Gene Expression Analysis

The Kolmogorov-Smirnov test showed that the data had a non-normal distribution (P < 0.05). Thus, a non-parametric test, the Mann-Whitney U test, was used to compare the studied variables between the groups. All statistical tests were performed in IBM SPSS Statistics 22 (SPSS Inc., Chicago, IL, USA), and P < 0.05 denoted a statistically significant difference between the two groups.

The participants’ clinicopathological information has been briefed in Table 2. A total of 24 endometriosis patients with stage III (n = 10) and IV (n = 14) were enrolled in this study (mean age: 33.5 ± 5.1 years). The control group included 21 women with benign gynecological diseases and three healthy women (mean age: 37.5 ± 9.1 years). A definite diagnosis in all the patients was made by histological analysis. The menstrual cycle of all the participants was determined; there was no significant difference in the menstrual phase between patients with endometriosis and control subjects (P value > 0.05).

Table 2. Participants’ Characteristics in This Study.

The relative levels of the mRNAs of MMP-9 and VEGF-A were measured in plasma samples using RT-qPCR (Figure 1). The plasma mRNA level of MMP-9 was significantly higher in endometriosis patients compared with the control group (P value = 0.01). In contrast, no statistically significant difference was observed between the two groups regarding VEGF-A mRNA plasma level (P value = 0.5). 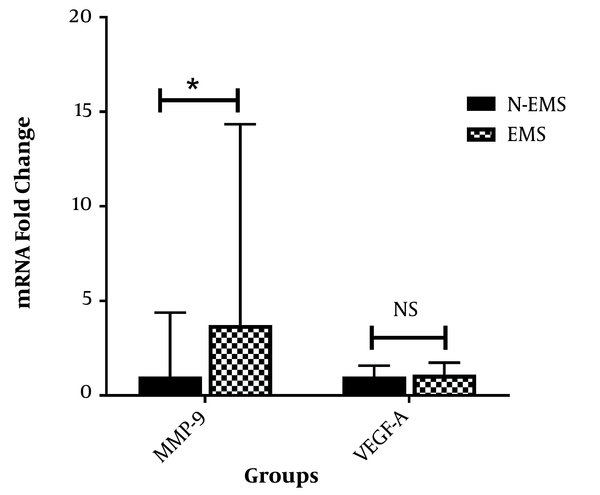 The mRNA fold-change of MMP-9 and VEGF-A in the plasma of endometriosis (EMS) patients compared with non-endometriosis (N-EMS) counterparts. (*: P value < 0.05, NS: non-significant).

4.3. Association of mRNA Levels of MMP-9 and VEGF-A with Menstrual Cycle Phase and Disease Stage

There was no significant association between the mRNA level of MMP-9 and the menstrual cycle (P value > 0.05). However, there was a significant positive association between VEGF-A mRNA level and the proliferative phase of the menstrual cycle in the study participants (P value < 0.05). Moreover, the expression levels of both target mRNAs in this study were independent of disease stage (P value > 0.05).

Endometriosis is a common and chronic gynecological disease that affects women’s reproductive health and quality of life. Endometriosis can have complications such as pelvic pain, dysmenorrhea, dyspareunia, and infertility (21), and its diagnosis requires a surgical intervention that is accompanied by risks and complications for women (22). The lack of non-invasive diagnostic tests for endometriosis leads to a considerable delay in disease detection (3). So, developing non-invasive diagnostic biomarkers for endometriosis is an urgent need. In this context, blood-based biomarkers can be helpful. In recent years, most efforts for finding non-invasive diagnostic biomarkers for endometriosis have been directed towards blood miRNAs. Also, it seems that circulating mRNAs can be useful as potential biomarkers (5, 7). Recently, it has been indicated that diffusion RNAs are protected by lipoprotein complexes or phospholipids. Thus, these molecules are stable in circulation despite the high amounts of the RNases present in blood (23). It has been shown that various kinds of RNAs, including mRNAs and non-coding RNAs, can be extracted and detected in body fluids such as plasma and serum (24, 25). Indeed, several investigations have shown that cell-free mRNAs in plasma can be promising non-invasive diagnostic tools for cancer (26, 27). Hence, in this study, the plasma levels of MMP-9 and VEGF-A mRNAs, as the genes relevant to endometriosis pathogenesis, were evaluated by RT-qPCR.

In this study, for the first time, we measured plasma MMP-9 mRNA level via qRT-PCR in women with endometriosis. Our results showed a significant increase in serum MMP-9 mRNA in endometriosis compared with non-endometriosis women. Moreover, this study showed that the expression of MMP-9 was independent of the menstrual phase. Interestingly, endometriosis, as a benign disease, shares a common feature with malignancies, and that is its invasive behavior (28). It has been shown that MMP-9, as a matrix metalloproteinase, is an essential factor for the degradation of the extracellular matrix (ECM) and the basement membrane and a crucial factor for cells’ invasive behaviors (29). Several studies have reported that MMP-9 can induce invasiveness in the endometrial tissue, leading to the degradation of ECM, invading other locations, and creating ectopic endometriosis lesions (30, 31). There are pieces of evidence suggesting that the MMP-9 gene is significantly overexpressed in the endometriosis tissue, which can be expected according to its role in endometriosis pathogenesis (13, 27). The elevation of MMP-9 mRNA in the plasma of endometriosis patients, observed in this study, was consistent with the results of previous investigations on the expression MMP-9 in the endometriosis tissue, suggesting its potential as a non-invasive diagnostic biomarker for endometriosis.

We must address some limitations of the present study. Our sample size was relatively small, and the patients mainly presented stage III and IV endometriosis. Hence, large-scale studies should be performed to clarify the applicability of MMP-9 and VEGF-A mRNAs as non-invasive diagnostic biomarkers for endometriosis.

Copyright © 2021, Gene, Cell and Tissue. This is an open-access article distributed under the terms of the Creative Commons Attribution-NonCommercial 4.0 International License (http://creativecommons.org/licenses/by-nc/4.0/) which permits copy and redistribute the material just in noncommercial usages, provided the original work is properly cited.
download pdf 242.47 KB Get Permission (article level) Import into EndNote Import into BibTex
Number of Comments: 0