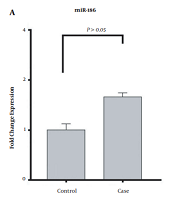 Addiction is one of the most important social and health problems in the world. Development of rapid and inexpensive diagnostic methods for identification of patients with addiction to methamphetamine is still a very important challenge. Recently, microRNAs (miRNAs) have been introduced as an accurate and reliable biomarker for diagnosis of human disorders.

In the present study, the expression of miRNA-186 and miRNA-195 was investigated in blood of patients with methamphetamine abuse disorder.

In this case-control study, 60 patients with methamphetamine abuse disorder (case group) and 60 healthy controls (control group) were enrolled. Total RNA was extracted from whole blood of patients and healthy controls, and then cDNA synthesis was performed using reverse transcriptase. Real-time PCR method was employed to investigate miRNA-186 and miRNA-195 expression. Finally, statistical software was used to analyze the obtained data.

The results demonstrated that the expression of miRNA-195 significantly increased in blood samples of patients with methamphetamine abuse disorders (8.75-fold change) compared to healthy controls (P < 0.05). However, the expression of miRNA-185 did not significantly increase (1.61-fold change) in patients compared to healthy controls (P > 0.05).

Our study suggested that miR-195 may play an important role in the pathogenesis of drug addiction and can be used as an accurate and reliable marker for the identification of patients with methamphetamine abuse disorder.

Methamphetamine addiction is a chronic debilitating cerebral disorder and is considered one of the costliest disorders worldwide. In the last decade, it has been reported that approximately 34,000,000 individuals have used methamphetamine in their life in the world (1). The methamphetamine was easily synthesized by relatively inexpensive compounds and was a highly addictive psychostimulant (2).

So far, limited studies have been performed on molecular pathogenesis of methamphetamine addiction, and efficient diagnostic and therapeutic methods have not been identified. In recent years, methamphetamine abuse disorder is commonly diagnosed using liquid chromatography-mass spectrometry (LC-MS) and gas chromatography-mass spectrometry (GC-MS) methods through identification of methamphetamine metabolites from whole blood, plasma, and serum samples (3). However, the mentioned methods are expensive and time-consuming, which require various equipment and materials. Therefore, development of an inexpensive and reliable approach for rapid diagnosis and efficient treatment approach for methamphetamine abuse disorder is still of great importance (4).

Several small non-coding oligonucleotides, microRNAs (miRNAs) are identified, which play important roles in the regulation of gene expression during brain differentiation and development (5, 6). Recently, a lot of diversity of miRNAs have been demonstrated that are involved in mature neurons as well as development and differentiation of neurons. Previous studies reported that miRNAs play an important role in morphogenesis, memory formation as well as drug addiction (7, 8). Evidence suggests that miRNAs are involved in the pathogenesis of various drugs abuse, such as cocaine, heroin, alcohol, and nicotine (9, 10).

Evidence also suggests that methamphetamine is one of the most commonly used illegal drugs in the world. In addition, the number of people dye from methamphetamine use has significantly increased in recent years (1, 2). Therefore, it is important to identify the underlying molecular mechanisms of methamphetamine abuse disorder to find specific biomarkers for therapeutic approaches.

Both miR-186 and miR-195 play an important role in the regulation of several molecular targets in the human brain such as angiogenesis, inflammation, synaptic transmission, and neurological mediators development (11, 12). However, molecular mechanisms of miRNA-186 and miRNA-195 function are unclear in Iranian patients with methamphetamine addiction. Here, we investigated the expression levels of miRNA-186 and miRNA-195 in the whole blood of Iranian patients with methamphetamine abuse disorder.

In the present case-control study, we enrolled 60 patients with methamphetamine abuse disorder, newly diagnosed without any treatment, from addiction treatment centers in Tabriz, Iran from 2018 to 2019. Moreover, 60 healthy individuals without any drug addiction were enrolled as the control group. The individuals with major psychiatric disorders, chronic disorders, cardiovascular disease, and brain disease were excluded from this study. All subjects, age- and ethnically-matched, were enrolled from population of East Azerbaijan province, Iran. Demographic information, clinical characteristics, and lifestyle (age, gender, marital status, literacy levels, drug use history, and syphilis infection status) of all subjects were recorded through interviews. All members of case and control groups signed a consent form according to Declaration of Helsinki ethical standards, approved by the Ethics Committee of Islamic Azad university, Tabriz Branch (IR.IAU.TABRIZ.REC.1398.082).

The whole blood samples (5 mL) were obtained from all members of case and control groups after 12 hours of fasting. Extraction of total RNA from whole blood samples was conducted using RNA extraction kit (GeneAll Biotechnology, Germany), according to instruction of the manufacturer. Poly-A polymerase enzyme was used to polyadenylation of the extracted RNA samples under the following conditions: 37°C for 30 minutes and then 65°C for 20 minutes. Next, the BON-RT adaptor primers were used to synthesize cDNA under the following conditions: 16°C for 30 minutes, 42°C for 30 minutes, 85°C for 5 minutes, and was stored at 4°C. The expression of miRNA-186 and miRNA-195 was investigated in both case and control groups in triplicate using a TaqMan probe-based RT-qPCR assay, in 15 μL total volume: PCR buffer (7.5 μL), cDNA (1.5 μL), forward primer (0.5 μL), reverse primer (0.5 μL), and DEPC-treated RNase free water (4.5 μL), under the following conditions: 94°C for 1 minute (initial denaturation), 94°C for 10 seconds (denaturation), 94°C for 30 seconds (annealing), and 72°C for 20 seconds (extension). The used primers were Has-miR-186-F-5'-CGGCAAACAATTCTCC-3' and Has-miR-195-F-5'-TTGGTAGCAGCACAGAAA-3'. The threshold cycle (CT) was identified, and the expression of miRNA-186 and miRNA-195 was normalized to U6 as endogenous control and calculated using the 2−ΔCq method.

Statistical analysis was performed with SPSS software (version 21.0) and GraphPad Prism 6 software. The results of demographic information, clinical characteristics, lifestyle, and miRNA expression are presented as mean ± standard error of mean (SEM) or mean ± standard deviation (SD). Difference in the expression of miRNAs in the case and control groups was evaluated using Pearson’s correlation analysis. In addition, difference in demographic information, clinical characteristics, lifestyle of the case and control groups were evaluated using Chi-square and independent sample t-test. A P-value < 0.05 was considered statistically significant.

Table 1. The Clinical Characteristics, Demographic Information, and Lifestyle of the Studied Patients with Methamphetamine Abuse Disorder and Healthy Controls a

b The P < 0.05 is statistically significant. 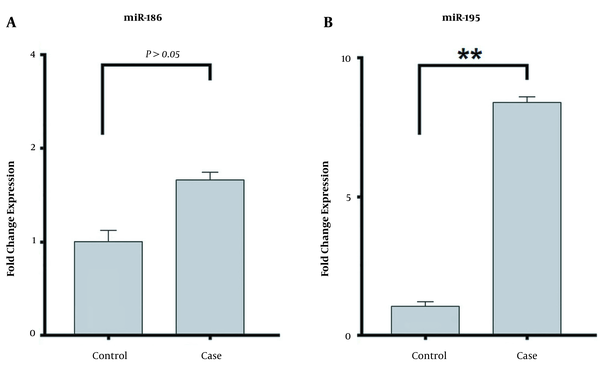 Discriminative ability of miRNA-186 (A) and miRNA-195 (B) in patients with methamphetamine addiction and healthy controls by receiver operating characteristic (ROC) curve analysis.

Evidence suggested that dysregulation of miRNAs played important roles in neuronal function, neurogenesis, as well as neurobiological processes (synaptic plasticity) (13-15). In addition, miRNAs are involved in addiction progress through direct modification of synaptic remodeling, dendritic spine morphogenesis, rewarding properties of drugs, self-administration rates of alcohol, and drug-seeking behavior (14, 16). Previous studies reported that miRNAs in blood and brain could be used as an accurate and reliable biomarker for diagnosis of addiction (17, 18). Currently, several miRNAs have been considered biomarkers for diagnosis and prognosis of several mental and physical disorders (19, 20). However, the expression level of various miRNAs in subjects with methamphetamine addiction is largely unclear. Therefore, identification of addiction-related miRNAs can be used for development of novel diagnosis and therapeutic approaches in patients with methamphetamine addiction.

This article was extracted from the MSc project of Zahra Asadi that Hossein Soltanzadeh supervised, and Jamal Hallajzadeh advised this project.

Copyright © 2021, Gene, Cell and Tissue. This is an open-access article distributed under the terms of the Creative Commons Attribution-NonCommercial 4.0 International License (http://creativecommons.org/licenses/by-nc/4.0/) which permits copy and redistribute the material just in noncommercial usages, provided the original work is properly cited.
download pdf 577.48 KB Get Permission (article level) Import into EndNote Import into BibTex
Number of Comments: 0