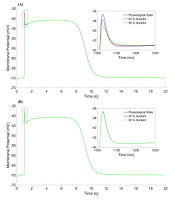 The cell membrane acts as a filter, allowing ions to enter and leave the cell. Ionic channels are responsible for passing ions. This task is the responsibility of the ion channel gates, and ion transfer generates the action potential. Potassium channels play a prominent role in gastrointestinal smooth muscle cells and slow-wave production. Potassium channels are involved in acid secretion and gastric contraction. Gastric functional problems such as reflux disease and motility disorder are classified as electrophysiological disorders.

This study aimed to investigate the effect of potassium channel gates on the electrophysiology of the human gastric smooth muscle cells.

Three states were considered for the potassium channels gate (Including physiological state, 50% blockage, and 90% blockage) to investigate the effect of the status of the gates, and a slow-wave diagram was obtained in these three states. Then, the value and the time of action potential were compared at five indicator points (initial potential, maximum spike potential, minimum valley potential, maximum plateau potential, and resting potential) in slow-wave.

Potassium channels affect the slow-wave of the human gastric smooth muscle cell in spike, valley, and plateau phases. Using this method and blocking ion channels by pharmacological agents, the effect of ions in different phases of the slow-wave can be investigated. Also, it can help improve the contractile and motility disorders of the smooth muscles of the gastrointestinal tract.

The cell membrane acts as a filter, allowing materials and ions to enter and leave the cell. Ion channels, located in the cell membrane, transport ions into and out of the cell. Each ion channel has gates that determine the rate of ion passage and generate the action potential (AP) (1). Impaired ion conduction can lead to cell and tissue dysfunction. Potassium channels affect the contractile and movement behavior of gastrointestinal smooth muscle cells (2, 3). The stomach is one of the most important parts of the digestive system, which is responsible for grinding, mixing, and propulsion the obtained substances to the intestine (4).

Gastric functional problems are classified as electrophysiological disorders. These disorders include functional dyspepsia, gastroesophageal reflux disease, cyclic vomiting syndrome, motility disorder (5, 6). Gastrointestinal electrophysiological problems can be ameliorated by implanting a bioelectronic chip into the gastric body and secondary stimulation using a slow-wave pattern (7). Potassium channels control the influx and efflux of potassium ions and have a great effect on the slow-wave formation and gastric acid secretion (8, 9). Impaired potassium channel function leads to disruption of ion homeostasis and acid secretion in the gaster (9, 10). These disorders may cause chronic gastric atrophy and gastric cancer (11, 12). So far, limited studies have been performed on gastrointestinal smooth muscle cells compared to the heart (13). A numerical model was presented by considering mathematical formulas for small bowel motility patterns (14). A quantitative model of the stomach was provided by Corrias and Buist (15). Studies have been performed on the quantitative model of the human jejunum (16), and the electrophysiological model of the human colon (17). Furthermore, research has been done on the distribution of the slow-wave in the gastric wall (18).

A distinctive feature of this study is the survey of potassium channel gates’ position on the passage of potassium ions. The entry and exit of potassium ions are one of the causes of the contraction and movement of gastric muscles. By controlling the condition of the gates and opening and closing them, slow-wave production disorders and dysmotility of the gastric wall muscles can be improved. One of the most important applications of this research is to control the condition of gates and blockage of potassium channels using pharmaceutical agents. Due to the importance of potassium channels, this study aimed to investigate the change of potassium channel gates’ position in different time states on the electrophysiological model of the human gastric smooth muscle cell (HGSMC) by in silico method. Using the electrophysiological model, the parameters affecting the AP and the slow-wave of the cell can be investigated and predicted without laboratory instruments.

where , , and are the overall cell current, stimulus current, and cell capacitance, respectively. All parts of the gastrointestinal tract have smooth muscles, ion channels, and similar slow waves (15-17). Therefore, to simulate the electrophysiological model of HGSMC, the colonic ion current formula (Equation 2) was used (17). 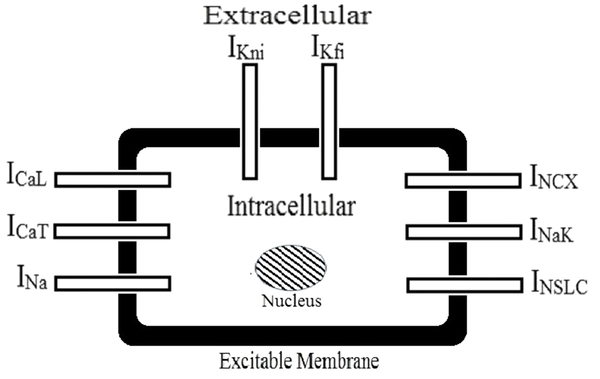 Then, the physiological characteristics of the gastric cell were used for greater adaptation. Membrane potential and cell capacitance were considered in -70 mV and 77 pF, respectively. The concentration of ions was considered as follows: intracellular potassium (164 mM), extracellular potassium (5.9 mM), intracellular sodium (10 mM), extracellular sodium (137 mM), and extracellular calcium (2.5 mM) (15). These values were placed in the electrophysiological model of the colon. Then, a slow-wave curve was obtained similar to the gastric model by optimizing the other parameters (15). Then, potassium channels were examined separately. In this model, and are described by the following equations:

The results of the electrophysiological model of the HGSMC for the indicator points are expressed in the slow-wave diagram as the AP value and time [Volt (time)] in the Table 1. the AP value and time are in millivolt and millisecond, respectively. The slow-wave diagram in the physiological state of the HGSMC is shown in Figure 2.

Table 1. The Value and Time of AP at Different Indicator Points on the Slow-Wave Curve of the HGSMC in the Physiological State 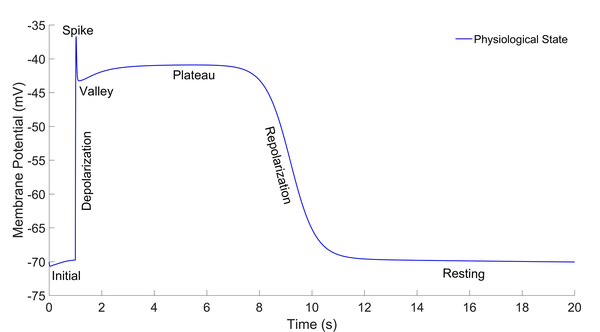 The slow-wave of the HGSMC in physiological state.

This curve has initial, depolarization, spike, valley, plateau, repolarization, and rest phases. The duration of one cycle slow-wave in the HGSMC is about 20 seconds (2.81cpm), while they are 5 and 6 cpm in the colon and the jejunum, respectively (15-17). The results were consistent with the experimental results in terms of shape, amplitude, and slow-wave duration (20, 21). Three states were considered for the time constant of the gate variables (τ) of potassium channels. These three states are displayed as follows on the graphs: physiological state (blue line), 50% blockage (red line), and 90% blockage (green line). The results of three different states for activation (), and inactivation () parameters of the potassium channel gates are shown in Figure 3A and B, respectively. 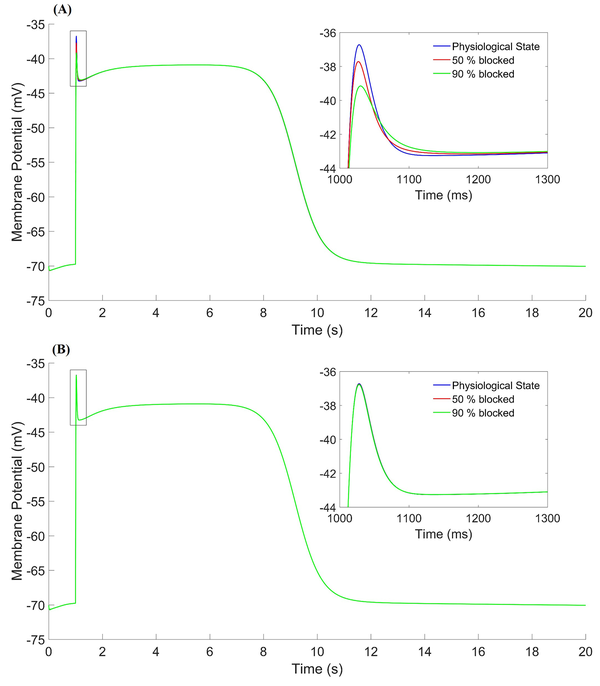 Figure 3A shows the effect of parameter on the MSP and MVP. The slight effect of parameter on MSP is shown in Figure 3B. In other phases, no difference is observed between the three states. The results are given in full in Table 2. The results of Table 2 showed that the maximum effect of the parameter was in 90% blockage compared to the physiological state. In this case, the maximum potential of MSP and MVP relative to the physiological state vary by -2.43 and 0.18 mV, respectively. Also, an increase by 64 ms was observed in the valley phase. In addition, the maximum effect of the parameter was very small at MSP in 90% blockage (decreased by 0.05 mV).

Table 2. The Value and Time of AP at the Indicator Points on the Slow-Wave Curve of the HGSMC in and Parameters 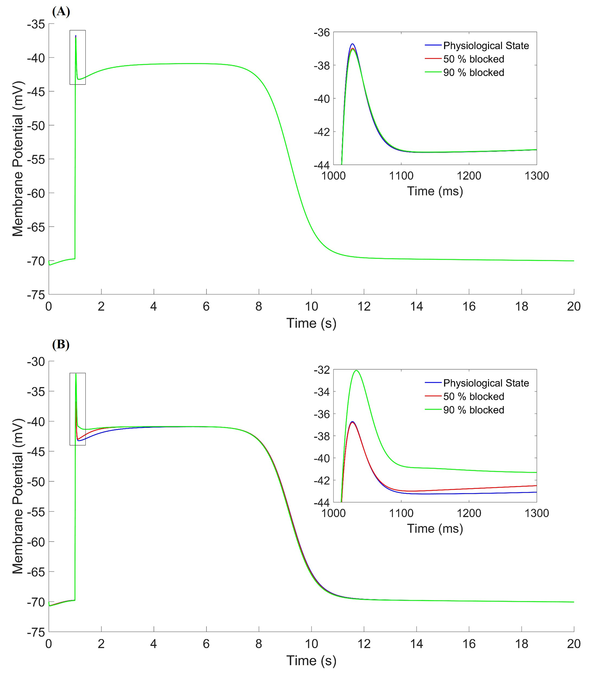 Table 3. The Value and Time of AP at the Indicator Points on the Slow-Wave Curve of the HGSMC in and Parameters

In this study, the role of potassium channel gates on the slow-wave was investigated in the HGSMC. Due to the similarity of gastrointestinal cells (smooth muscle, ionic currents, slow-wave curve), the gastric cell model was adapted from the electrophysiological model of the colon (17). Then, gastric cell properties were placed in the colon model and a slow-wave was obtained similar to Corrias's study (15), and experimental findings (20, 21). To compare the results, the value and time of membrane potential were used at several indicator points in the slow-wave curve. Three states (physiological, 50% blockage, 90% blockage) were considered to evaluate the condition of the channel gates, and the results were compared in the indicator points.

The results showed that the effect of and on the slow-wave in the case of 90% blockage was more than other parameters. The parameter decreased MSP by 6.6%, whereas increased MVP by 0.4% (Figure 3A). The parameter increased MSP by 12.6% and MVP by 3%. Also, the time of occurrence of MPP has been reduced by 7.9% (Figure 4B). These results are consistent with the results of gastric, jejunal, and colon models when potassium channels are blocked by simulating pharmacological agents (15-17). It seems that the changes in spike, valley, and plateau phases were increased in the slow-wave by decreasing potassium ion permeability.

Pharmacological agents can be used to block potassium channels, control slow-wave phases, and improve motility disorders in the gastrointestinal tract. In smooth muscle cells, apamin and tetraethylammonium are known as potassium channel blockers (2, 22). Also, flecainide and 4-aminopyridine are known as fast potassium channel blockers (2, 23). The effect of K+ channels has been known as a major factor in the behavior of gastrointestinal cells (2, 3). Potassium channels have a critical role in acid secretion in parietal cells in the gastric mucosa and regulation of cell volume in small intestinal epithelial cells. They also affect the transport of salt and water in the epithelial cells of the colon (24). Potassium ion channels have a significant effect on the contraction of smooth muscle cells, thus changing the diameter of blood vessels and blood pressure (25, 26).

Yuan et al. conducted a thorough study on physiological characteristics of potassium channels and their importance in the stomach and related diseases (9). The proper functioning of potassium channels has an important effect on the stimulation of the HGSMC (2, 3, 22, 23), which was discussed in this study. This study aimed to develop modeling of gastrointestinal muscle cells. So far, more limited studies have been performed on modeling the gastrointestinal tract than the heart. While different models have been suggested for the heart, including electrophysiological, electrochemical, three-dimensional, FEM, and quantitative (13, 27, 28). Finally, considering the results of this study, pacemakers may be designed to control the contractile activity of the gastric smooth muscle, such as the heart (7, 29). In the future, further studies should be performed on calcium channel gates (contraction factor) and sodium channel gates (depolarization factors). Using this method may elucidate the effect of ions on slow-wave phases in smooth muscle cells.

The highest effect of potassium channels was observed in the spike, valley, and plateau phases in slow-wave of the HGSMC. Motility disorders may be improved by blocking the channels and limiting the passage of ions by pharmacological agents. The electrophysiological model can investigate and predict the behavior of channels and gates in cell membrane without a laboratory environment.

The authors are thankful to Dr. M. L. Buist for his kind advice.

Copyright © 2022, Gene, Cell and Tissue. This is an open-access article distributed under the terms of the Creative Commons Attribution-NonCommercial 4.0 International License (http://creativecommons.org/licenses/by-nc/4.0/) which permits copy and redistribute the material just in noncommercial usages, provided the original work is properly cited.
download pdf 1.63 MB Download Supplementary Material Get Permission (article level) Import into EndNote Import into BibTex
Number of Comments: 0