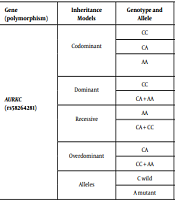 Infertility is a major public health and social problem in human reproduction that is known as a multifactorial complex disorder. Genetic background and mutations and single nucleotide polymorphisms (SNPs) on the genes involved in sperm development are the important causes of male infertility.

In this study, we evaluated the association of AURKC gene polymorphism (rs58264281) and idiopathic male infertility in the Iranian Azeri population.

This study was performed among 100 men with idiopathic infertility (case group) and 100 healthy men with successful fertility (control group) from East Azerbaijan, Iran. Genomic DNA extraction was carried out from peripheral blood samples by the proteinase K method. Genotype analysis was conducted by the tetra-primer amplification refractory mutation system-polymerase chain reaction (Tetra-ARMS PCR). SPSS version 21 was used for the analysis of the obtained data.

We observed that the CA and AA genotypes were significantly increased in patients with infertility as compared to healthy controls. Our results demonstrated that the mutant allele of AURKC gene polymorphism (rs58264281) was a significant risk factor in male infertility.

We suggested a significant correlation between the AURKC gene rs58264281 polymorphism and male infertility in the Iranian Azeri population. However, further studies are required among other ethnicities, races, and geographic areas with larger sample sizes.

The AURKC gene is a major cause of monomorphic teratozoospermia (macrozoospermia), which is known as macrocephalic multiflagellar spermatozoa syndrome (9). This disorder is commonly associated with oligozoospermia and characterized by large-headed and multiflagellar spermatozoa (6). The AURKC gene encodes the third member of the Aurora subfamily of serine/threonine protein kinases and is commonly expressed in the testis. Evidence suggests that the AURKC protein plays an essential role in the production of euploid gametes through the control of microtubule-kinetochore attachment and verifying the bi-orientation of tensions preceding chromosome segregation (10, 11). Moreover, the AURKC protein participates in the spindle assembly checkpoint (SAC) that inhibits the production of aneuploid cells in mitosis and incorrect microtubule segregation in meiosis, which reduces chromosomally abnormal gametes (12, 13). Previous studies have reported that several mutations and SNPs in the AURKC gene cause defects in the function of encoded proteins, which are associated with male infertility (14, 15).

So far, numerous studies have investigated the association of the AURKA gene polymorphisms and male infertility in various populations. However, the reported results by these studies are very inconsistent. This is the first attempt to evaluate the association of the AURKC gene polymorphism (rs58264281) and idiopathic male infertility in the Iranian Azeri population.

This case-control study was conducted among 100 infertile men (25 - 50 years old) with idiopathic azoospermia and oligospermia as the case group and 100 healthy men (age and ethnic matched and genetically unrelated) with previous successful reproduction as the control group. The participants were from Azerbaijan, Iran, and were referred to the Department of Infertility, Valiasr Hospital, Tabriz, Iran. In the case group, the patients with cryptorchidism, hypogonadotropic, hypogonadism, orchitis, ejaculatory duct obstruction, microdeletions on Y chromosome, and abnormal karyotype were excluded from the study. We recorded the demographic characteristics of all the patients and healthy controls by questionnaires and interviews (Table 1). All the patients and healthy controls were first informed of the study objectives and then signed a consent form. The present study was approved by the Ethics Committee of Islamic Azad University, North Tehran Branch, Tehran, Iran (code of ethics: IR.IAU.TNB.REC.1399.030).

Genomic DNA extraction was carried out using 5-mLwhole blood samples by the proteinase K method. The quality of the extracted genomic DNA samples was investigated using electrophoresis on 1% agarose gel. In addition, the quantity of the extracted genomic DNA samples was investigated using a nanodrop instrument. The genotype analyses of the DNA samples were carried out using the tetra-primer amplification refractory mutation system-polymerase chain reaction (Tetra-ARMS PCR) method. The designed primers included: (1) forward outer in: 5′-GGTGTATGCGTTGTTCATTCCCACA-3′; (2) reverse outer in: 5′-TCCTGAACCCTCTGGATGGCTGTT-3′; (3) forward inner: 5′-GTAGCAGTGAGACATCAGTGAGGC-3′; (4) reverse inner: 5′-CGCTTCCAATCCTGCTCGTCCTGTAA-3′. The amplification was conducted using a 50-ng template DNA (1 μL), 250 nM each primer (0.5 μL), and 1 X Master Mix (12.5 μL) in a total volume of 25 μL. Condition: 1 cycle for the initial denaturation (5 minutes in 94°C), 30 cycles for denaturation (40 seconds in 94°C), annealing (45 seconds in 60°C), and extension (45 seconds in 72°C), and 1 cycle for the final extension (5 minutes in 72°C). The amplified PCR products were separated using electrophorese on 2% agarose gel, and the sizes of the fragments were estimated by a 50-bp ladder (122 bp for allele C and 366 bp for allele T).

The obtained data were analyzed by SPSS, version 21.0. The demographic characteristics of the case and control groups were analyzed by independent samples t-test. Hardy-Weinberg equilibrium (HWE) was investigated by the chi-square (χ2) test and Fisher’s exact test. The correlation of the AURKC gene rs58264281 polymorphism and male infertility risk was investigated by logistic regression. A P-value of less than 0.05 was considered significant.

The demographic characteristics of the patients and healthy controls are demonstrated in Table 1. The statistical analysis demonstrated that positive family history of infertility and tobacco smoking in the control group was significantly less than the case group (P < 0.05), suggesting that positive family history of infertility and tobacco smoking are significant genetic and environmental factors increasing the risk of infertility in Iranian Azeri men. Moreover, we observed that the concentration, motility, and volume of sperm in the control group were significantly higher than in the case group (P < 0.05). However, the statistical analyses indicated no significant differences between the case and control groups in terms of age, body mass index (BMI), and alcohol consumption (P > 0.05).

Table 1. The Demographic Characteristics of the Studied Patients and Healthy Controls a

The genotypic distribution of the AURKC gene rs58264281 polymorphism in the case and control groups was in agreement with HWE (P > 0.05). The obtained results demonstrated that the risk of male infertility was significantly increased in the presence of CA (P = 0.0046; OR = 7.08; 95% CI: 1.7 - 32.2) and AA (P = 0.022; OR = infinity; 95% CI: 1.7-infinity) genotypes. Moreover, our results demonstrated that the presence of A mutant allele (P = 0.0001; OR = 12.2; 95% CI: 3.2 - 53.1) significantly increased the risk of male infertility (Table 2). These results suggest a significant association between the AURKC gene rs58264281 polymorphism and male infertility in the Iranian Azeri population. The genotypes and alleles distributions in the case and control groups are demonstrated in Table 2.

To our knowledge, our study is the first positive report on the significant correlation of the AURKC gene rs58264281 polymorphism and male infertility in the Iranian Azeri population. The discrepancies in the results of previous studies may be due to the interaction of other genes involved in male infertility. Moreover, differences in genetic background, geographical area, sample selection bias, sample size, environmental factors, ethnicity, and race are the possible could account for the contradiction in previous findings (20-22).

In sum, our study suggests that the AURKC gene rs58264281 polymorphism is significantly associated with male infertility risk in the Iranian Azeri population. However, due to the widely inconsistent results by different studies, we recommend further extensive studies among other populations, races, and ethnic groups with larger sample sizes.

Copyright © 2021, Gene, Cell and Tissue. This is an open-access article distributed under the terms of the Creative Commons Attribution-NonCommercial 4.0 International License (http://creativecommons.org/licenses/by-nc/4.0/) which permits copy and redistribute the material just in noncommercial usages, provided the original work is properly cited.
download pdf 123.95 KB Get Permission (article level) Import into EndNote Import into BibTex
Number of Comments: 0