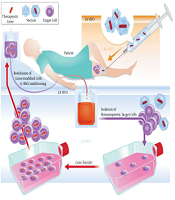 Gene therapy is known as a technique of delivering the genetic material to the patient's body to correct the altered genes or site-specific modifications that have therapeutic effects (1). Gene therapy is divided into two categories of somatic gene therapy (SGT) and germline gene therapy (GGT) (2).

SGT is a condition in which the therapeutic genes are transferred into somatic cells. Any modification cannot pass to the next generation, and the offspring of the patient can develop the disease (1). Two techniques are used in SGT, ex vivo and in vivo. In the first type, cells are cultured outside the body, exposed to the viral vector for genetic modification, and then, transferred to the patient's body. Another type is based on the direct administration of the vector to the cells of the body (Figure 1) (3). 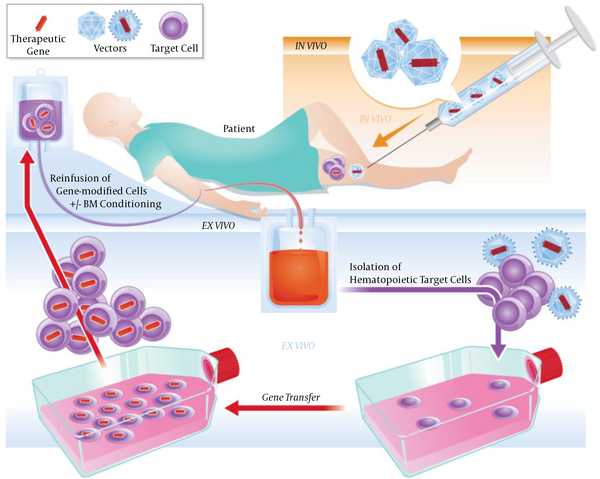 In vivo and ex vivo gene therapy concepts (2). In the in vivo technique, the therapeutic gene is introduced directly into the body, while in the ex vivo, the patient’s cells are extracted from the body, genetically modiﬁed outside the body, and then transferred into the patient.

GGT focuses on germ cells (oocytes and sperms) or the preimplantation embryo. In this method, the germ cells are modified by the entrance of functional genes into their genome. This causes permanent changes that are inherited by all next generations (4).

One of the main aspects of gene therapy is the optimization of delivery vehicles (vectors) that are mostly plasmids, nanostructured, or viruses. The viruses are the best candidate for gene delivery due to their excellence in invading cells and inserting their genetic material (1).

Gene therapy is considered a promising approach in the treatment of various diseases, such as autoimmune diseases, diabetes, cancers, and heart diseases that cannot be treated using conventional methods (5).

The US Food and Drug Administration (FDA) approved the first gene therapy approach, which was conducted in 1989. In this study, immunotherapy was performed for patients with advanced melanoma (6).

In 2017, the US FDA approved Voretingene voretigene (Luxturna, Spark Therapeutics Inc) for the treatment of RPE65-associated leber congenital amaurosis (LCA) (7).

Type 1 diabetes mellitus (T1DM) is an autoimmune disease characterized by destroying insulin-secreting islet β cells mediated by T cells. Manipulating of responsible genes of this disease by gene therapy could help manage the disease and even cure T1DM (5). Rao et al. demonstrated that the transfer of the hepatocyte growth factor (HGF) genes using adenovirus into rodents’ pancreatic islets increased the expression of these genes. Overexpression of HGF induced the β cells proliferation and enhanced their survival and functions (8).

Gene therapy seems to be an opportunity to improve the treatment of inherited monogenic retinal disorders. In most clinical studies, recombinant adeno-associated virus (AAV) or lentivirus vectors have been used for gene transfer to the retinal cells. RPE65 is one of the genes, which their mutations cause LCA. A lack of functional RPE65 leads to the inability of the rod photoreceptor cells to respond to light. Several trials have reported that subretinal injection of a recombinant AAV2/2 vector containing the RPE65 cDNA can enhance retinal function and vision in humans with RPE65-LCA (7).

Carcinoembryonic antigen (CEA) belongs to a cell-surface glycoproteins family and is considered as a tumor marker in the clinical diagnosis of several cancers, such as colorectal cancer (CRC). It is overexpressed in more than 90% of CRC cells. Its promoter has been used in directing suicide E gene (pCEA-E) against colon cancer in order to high suppression of cell growth in CRC cells compared to normal colon cells (10).

In gene therapy, a normal gene is transferred to the genome to replace an abnormal gene that caused a specific disease. Various challenges are involved in this process, including lack of adequate information about the genes involved in a certain disease, especially complex diseases, in which both genetic and environmental factors play a role. Also, a potential immune response to AAV vectors is controversial.

Despite these limitations, further progression in the safe and effective vector design, identifying the specific cells of the body that need treatment, and a better understanding of the pathomechanisms of diseases and their genetic issues will be an open window in genome editing as a new treatment approach for untreatable diseases.

In conclusion, gene therapy can be employed to complement conventional therapies resulting in more effective treatments.

Copyright © 2021, Gene, Cell and Tissue. This is an open-access article distributed under the terms of the Creative Commons Attribution-NonCommercial 4.0 International License (http://creativecommons.org/licenses/by-nc/4.0/) which permits copy and redistribute the material just in noncommercial usages, provided the original work is properly cited.
download pdf 2.38 MB Get Permission (article level) Import into EndNote Import into BibTex
Number of Comments: 0