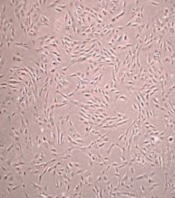 Today, stem cells are the best candidates for cell therapy and tissue engineering. Adipose-derived Stem Cells (ADSCs) are an essential source of cells in replacement therapies of many diseases.

This study compared the proliferation of ADSCs in alginate and fibrin scaffolds.

Adipose-derived stem cells were isolated from adipose tissue and cultured in alginate or fibrin scaffolds with a medium containing PRP 10% or FBS 10%. Then, the cell viability percentage was assessed by MTT assay and trypan blue staining. Also, the percentages of living, apoptotic, and necrotic cells were assessed by flow cytometry assay on the fourth and eighth days.

These findings indicate the positive effect of PRP on the survival and proliferation of ADSCs compared with FBS. Therefore, PRP can be considered a suitable supplement to replace animal sera like FBS.

Millions of people suffer from different diseases worldwide (1). In recent years, tissue engineering has cured many diseases (2). Tissue engineering is a branch of science used in the medical and pharmaceutical fields to regenerate tissues and treat different illnesses. There are three main factors in tissue engineering: Cells, scaffolds, and growth factors (3). Adipose-derived Stem Cells (ADSCs) are a type of stem cell with characteristics such as high cell proliferation (4) and differentiation (5) with many advantages compared to other sources of stem cells (6).

Scaffolds play the same role as extracellular matrix (ECM) and can replace, too (7). Polymers are materials extensively used for creating appropriate scaffolds in tissue engineering. Scaffolds can create synthetic and natural polymers. Alginate and fibrin are natural substances with high application potential in tissue engineering (8).

Fibrin is a matrix protein earned from fibrinogen. Fibrin scaffolds have more applications than synthetic scaffolds for cell proliferation and differentiation (9). Fibrin has the sites for cell adhesion and can play a critical role in cell adhesion, proliferation, and migration (10). Alginate is a linear polysaccharide polymer obtained from algae and bacteria (11). The hydrophilic property of alginate makes it suitable for cell survival, proliferation, and scaffold fabrication while it has mechanical stability (12). Thus, this natural polymer is widely used for cartilage and bone regeneration (13).

In this study, the effects of alginate and fibrin scaffolds on ADSCs proliferation and survival were evaluated in the presence of PRP or FBS. Besides, the percentages of apoptotic and living cells were compared in different groups.

Human subcutaneous abdominal white adipose tissue was gained from elective lipoaspirate samples of abdominal fat from patients at Alzahra Hospital of Isfahan after obtaining written informed consent. Adipose tissue was washed several times by PBS. The samples were digested by 0.01% collagenase type I for 30 min at 37˚C. Then, the same volume of DMEM was used for cell suspension and centrifuged for enzyme neutralization for 10 min at 1,500 rpm. The cell pellet was suspended in DMEM, supplemented by 10% FBS and 1% penicillin, and then incubated at 37˚C in 5% CO2. After the cells reached about 80% confluence, they were trypsinized and cultured again (15). When the cell density reached 80% confluence in passage 3, h-ADSCs trypsinized and 5 × 105 cells were seeded in 24-well plates for four groups, including alginate-FBS, alginate-PRP, fibrin-FBS, and fibrin-PRP.

Human PRP is derived from the peripheral blood. In this study, PRP was obtained from blood bags in the blood bank of Alzahra Hospital, Isfahan. Briefly, 20 mL peripheral blood was collected into falcon tubes and centrifuged at 3,600 rpm for 10 min. The plasma fraction was collected, added 10% CaCl2, and incubated for PRP activation. Finally, samples were centrifuged at 1,500 rpm for PRP collection.

Fibrinogen and fresh frozen plasma (FFP) solutions were obtained from the blood bank of Alzahra Hospital. Then, FFP was melted at 37°C for 10 min. Next, 16 mL of FFP was mixed with 10 mL of 10% calcium glucuronate. The solution was incubated for 90 min at 37°C and subsequently centrifuged at 2,200 rpm for 10 min. The supernatant was collected as thrombin and stored at -80ºC (16). Fibrinogen was extracted from cryoprecipitate, and 500 mL of fibrinogen was mixed with 500 thrombin. After 10 min, fibrinogen was converted to fibrin by thrombin in each well. Finally, 5×105 h-ADSCs were added to fibrin and 1 cc medium containing low-glucose DMEM supplemented with 10% FBS or 10% PRP.

Cells were encapsulated in an alginate scaffold based on a previous study with a slight modification (17). We dissolved 1.2 g alginate powder in 100 µL of 0.9% sodium chloride to prepare the alginate solution. The alginate solution was passed through a filter with a pore size of 0.2 µm for decontamination. Then, 1×106 h-ADSCs was mixed with 200 µL of sterile alginate solution. Next, 5 × 105 cell suspension/alginate was added into CaCl2 solution in each well using a 22 gauge needle. After 15 min, the cell suspension became gel-like. The CaCl2 solution was discarded, and 2 mL of 0.9% NaCl was added to each well. Finally, NaCl solution was discarded, and cells were placed in a 1 cc of medium containing low-glucose DMEM supplemented with 10% FBS or 10% PRP.

The MTT assay was performed to assess the effects of fibrin and alginate scaffolds on the survival and proliferation of h-ADSCs for four and seven days. Briefly, the medium in each well was aspirated, and 400 µL of DMEM/F12 free FBS and 40 µL of MTT solution were added. The cells were incubated at 37˚C in 5% CO2 for 4 h. The supernatant was discarded, and 400 µL of DMSO solution was added to extract MTT formazan. After 2 h incubation in the dark, the absorbance of each well was determined by a microplate reader (Hyperion MPR4) at the wavelength of 540 nm (15).

To measure the apoptosis of h-ADSCs, we used a FITC Annexin V Apoptosis Detection Kit according to the manufacturer’s instructions on days 4 and 8. First, h-ADSCs were trypsinated, and the binding buffer was mixed with the cell suspension. Then, 5 µL of annexin V-FITC and 5 µL of propidium iodide (PI) were added to the suspension and placed for 20 min at 4°C in the dark. Finally, analysis was performed using a flow cytometer (BD, USA). The negative control was cells without annexin V-FITC-PI.

The number of viable cells was calculated using the Trypan blue test on days 4 and 8. In this method, 10 µL of 0.4% trypan blue was added after placing 10 µL cell suspension on the slide. Then, cells were counted under an inverted microscope. In this protocol, viable cells have clear cytoplasm while dead cells appear with blue cytoplasm (18).

All the data were presented as mean ± standard deviation (SD) and analyzed by one-way ANOVA. Statistical significance was considered at P < 0.05.

The cells were cultured without microorganism contamination. After 24 hours of incubation, the cells were attached to the flask. Besides, h-ADSCs were observed with a spindle-like shape (Figure 1A and B). After the third passage and preparation of the scaffold (Figure 2A and C), ADSCs were transferred to alginate or fibrin scaffolds, and the cells changed to a circular shape (Figure 2B and D).

(A) Phase-contrast image of h-ADSCs in passage 3, (B) cells with 80 - 90% confluence; the morphological characteristics of cells exhibited a fibroblastic-like shape. Scale bars are a = 150 µm and b = 200 µm 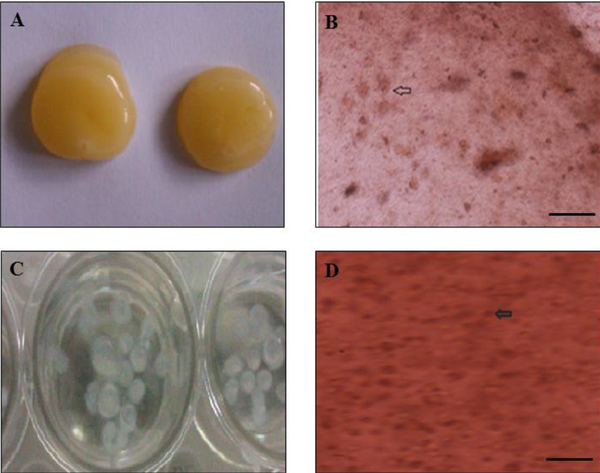 4.2. In Vitro Cytocompatibility of Scaffolds 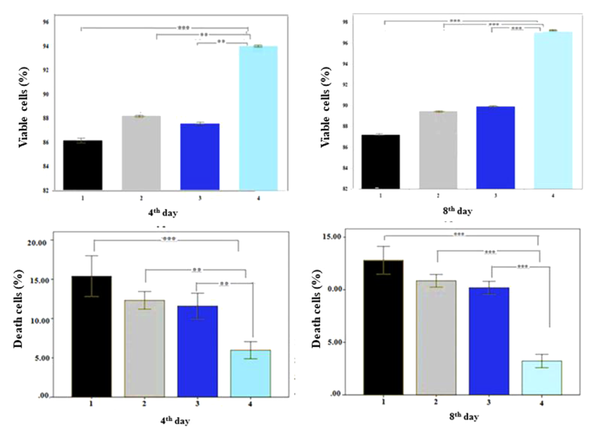 Early and final apoptosis assayed using Annexin V-FITC/PI by flow cytometry in different groups on day 4 (A) and day 8 (B). The cell distribution patterns include necrotic cells (Q1), late apoptotic (Q2), normal viable cells (Q3), and early apoptotic cells (Q4). The highest viable cells were obtained in the Fibrin-PRP group with 93.9% and 92.3% on days 4 and 8, respectively.

Many studies could stimulate the rapid growth and proliferation of stem cells in the presence of PRP (6, 19). Mardani et al. compared the effect of different concentrations of PRP on chondrogenic differentiation of h-ADSCs, proving that a 10% concentration of PRP had more beneficial effects on h-ADSC differentiation (6). Therefore, this study used this concentration. Another study found that 10% PRP might be optimal for increasing mesenchymal stem cells (MSCs), and PRP promoted MSCs differentiation along a chondrogenic line (19). Han et al. showed that ideal PRP should contain 50 - 100 ng/mL TGFβ1 to positively affect the proliferation of human periodontal ligament cells (h-PDLC) in vitro and effectively stimulate alkaline phosphatase activity and osteoblastic differentiation (20). Also, Zhang et al. showed that a low concentration of PRP could induce proliferation and migration of BM-MSCs; also, the osteogenic ability was increased in the presence of PRP (21). It was proven that PRP might increase cell proliferation through activating ERK1/2, JNK, and Akt in many signaling pathways (22).

Scaffolds should provide an environment like the extracellular matrix for cell proliferation and differentiation. Furthermore, scaffolds must not lead to an immune response in the host body (19). Fibrin is biocompatible and non-toxic and makes no inflammatory reactions such as necrosis or fibrosis in the body (23). Therefore, it has many applications in tissue engineering (24). A study evaluated the proliferation, survival, and apoptosis of nucleus pulposus cells in fibrin and alginate scaffolds for two weeks (23) and obtained results in line with the present study results. Another study evaluated the mechanical characteristics and cell proliferation in four scaffolds: Human platelet-poor plasma, alginate, fibrin gel, and collagen sponge. The fibrin gel scaffold showed an ideal combination of mechanical characteristics and cell viability compared to other groups (25). Also, the implantation of poly-ε-caprolactone/fibrin-alginate scaffold into rat cranial defect model could regenerate the cranial bone defect in rats 4 - 12 weeks post-operation (26). However, we suggest further studies to evaluate the effects of different concentrations of PRP on cell proliferation and cartilage regeneration in vivo using mechanical scaffolds.

In this study, the fibrin scaffold in the presence of PRP provided a suitable environment for cell proliferation. Therefore, we suggest that PRP be used in tissue engineering to replace FBS. This strategy may be effective for cell differentiation and therapies of different diseases, but the clinical application of PRP needs further investigations.

The authors are grateful to Isfahan University of Medical Sciences for financial support.

Copyright © 2022, Gene, Cell and Tissue. This is an open-access article distributed under the terms of the Creative Commons Attribution-NonCommercial 4.0 International License (http://creativecommons.org/licenses/by-nc/4.0/) which permits copy and redistribute the material just in noncommercial usages, provided the original work is properly cited.
download pdf 7.97 MB Get Permission (article level) Import into EndNote Import into BibTex
Number of Comments: 0