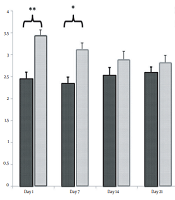 Tobacco use in various forms, including hookah, has increased in recent years, especially among young people, who are the group of reproductive age. In the present study, the effect of nicotine on fibronectin expression as a component of basement membrane and extracellular matrix was evaluated in the kidney tissue of neonates whose mothers were exposed to cigarette smoke during pregnancy and lactation period.

Fibronectin expression on days 1, 7, 14, and 21 after delivery was evaluated in the kidneys of Balb/C mice neonates whose mothers were exposed to cigarette smoking during pregnancy and lactation periods. Immunohistochemical and real-time PCR evaluations were performed, and a comparison was made with the control groups. In the experimental groups, nicotine dissolved in saline was injected subcutaneously at a dose of 2 mg/kg daily until the desired day.

Our results demonstrated that the expression level of fibronectin increased in nicotine-administrated newborns compared to the healthy controls on days 1 (P = 0.043) and 7 (P = 0.008). The intensity of color reaction on days 1 and 7 was significantly higher in the main kidney structures, including glomeruli and proximal and distal convoluted tubules, in the experimental group than in the control group. The maximum fibronectin expression level was observed on day 7 in the experimental group in comparison with the control group.

Despite many efforts to raise awareness regarding the dangers of smoking, unfortunately, the smoking habit is increasing among young people in the world and Iran. The problem becomes more complicated when the use of hookah, the smoking of one of which is equivalent to smoking 100 cigarettes, increases among young people as the group of reproductive age (1, 2). It is evident that nicotine, similar to other exogenous chemical molecules, can reach the fetus by breaking the blood-placenta barrier, leading to teratogenic effects. Smoking causes side effects, such as pulmonary-heart diseases (3) and a wide range of abnormalities, including cleft palate and lip. Nicotine is one of the most important alkaloids in cigarettes, which has very high absorption and toxicity, quickly crosses the placental barrier and affects the development of the fetus. It acts on the nicotinic acetylcholine receptor (nAChR).

Baroni et al. showed that the expression of genes related to molecular signaling pathways and extracellular matrix (ECM) metabolism plays an important role in the occurrence of these teratogenic effects (4). Deregulation of the expression of genes associated with ECM, apoptosis, placental function, blood clotting, stress response, and lipid metabolism was reported in fetuses whose mothers were directly or indirectly exposed to nicotine (5). Our previous study showed that maternal nicotine could reduce laminin alpha 5 expression in the lung tissue of newborns (6). Moreover, it has been reported that nicotine affects organ evolution via its effects on the AChRs and altering glycoprotein production (7). In this regard, Sekhon and his colleagues reported that augmented collagen gene expression is related to the nAChR alpha 5 (8). some researchers are seeking treatments for complications, abnormalities, and alterations in gene expression in neonates with smoking mothers.

It has been found that ascorbic acid and uric acid reduce peroxide hydrogen, fibronectin expression, and vascular endothelial growth factor (9). Pahang and his colleagues stated that vitamin C reduced fibronectin expression in neonatal renal tissue (10). There are, however, conflicting studies showing that vitamin C increases glycoproteins, such as collagen type 1 and fibronectin (11). In our previous study, we observed that nicotine by altering laminin-α5 expression is associated with some renal malformations in neonates whose mothers were exposed to nicotine at embryonic and lactation periods (12).

In the present study, we considered fibronectin as another member of the renal basement membrane and ECM. Nicotine is transferred to the fetus during the fetal period by crossing the placental barrier and has a destructive effect on the connective process, and some impacts are observed on the neonatal kidney tissue with changes in tissue components, including fibronectin. Therefore, this study aimed to evaluate nicotine use during pregnancy changes in fibronectin in renal glomeruli of neonatal mice.

In this experimental study, according to the standard ethical guidelines (National Institutes of Health, publication No. 85-23, revised 1985; European Communities Directive 86/609/EEC), 60 virgin mice (Balb/C) were used. After mating and determining the first day of pregnancy, animals were divided into four experimental and four control groups. All the subjects received standard pellet food and water. The temperature in the animal room and injection room was maintained at 22 ± 1°C with a relative humidity of 55% ± 5%, and the light was on a 12: 12 h light-dark cycle. Mothers in the first experimental group received 2 mg/kg of nicotine daily from the 8th to last day of pregnancy. Moreover, mothers in the experimental groups 2, 3, and 4 received the same amount of nicotine from the eighth day of pregnancy to 7, 14, and 21 days after delivery, respectively. Mothers in the control groups received normal saline on the same days. Therefore, some samples were from the kidneys of offspring whose mothers received nicotine or normal saline during gestation, and other samples were obtained from the neonates of mothers that received nicotine or normal saline from day 8 of gestation to days 7, 14, and 21 after delivery (or during lactation). In other words, nicotine reaches the fetus or newborns through the placenta or milk (13).

Infants were anesthetized, and their kidneys were surgically removed on days 1, 7, 14, and 21 after delivery. For immunohistochemistry and histology techniques, the right removed kidneys were fixed with formaldehyde 10% for 24 h, and the left kidneys were transferred to a special solution for real-time PCR. The right fixed kidneys were prepared according to the routine histological methods as serial sections of 5 µm thickness were prepared from paraffin blocks. After removing paraffin, half of the sections were used for routine hematoxylin and eosin staining, and others were prepared for immunohistochemistry. In the latter method, the tissue sections were washed twice in tris buffer (containing 1.5% sodium chloride at pH 7.4) for 5 min each time. In order to block the nonspecific antigens, slices were incubated with Triton 0.3% X100 in tris buffer and goat serum for 3 h and then were immersed in 3% oxygenated water/methanol solution for 1 h to inhibit endogenous peroxidase activity. Afterwards, sections were incubated with fibronectin antibody conjugated with horse radish peroxidase and diluted at 1: 50. Next, samples were placed in tris buffer containing 3% triton and 2% serum. After washing with tris buffer three times, sections were exposed to diaminobenzidine in 0.03% oxygenated water. Finally, to create background color, the sections were stained with H&E. With this staining technique, the desired fibronectin will react positively to anti-fibronectin and appear light to dark brown depending on its amount. The intensity of color, which indicates the intensity of reaction with fibronectin (or fibronectin expression), was blindly scored by three experienced people according to Table 1 (14).

In this experimental study, real-time PCR was used to measure the mRNA expression of fibronectin protein. To this aim, following homogenizing the left kidney tissue and extracting total RNA, the cDNA sequence was constructed using a cDNA synthesis kit. The produced cDNA strands were mixed with specific primers of fibronectin genes and were amplified with thermal cycler. Then, the expression rate of the mRNA of fibronectin protein was analyzed using specialized software (12). The results of real-time PCR were analyzed using the one-way analysis of variance followed by the Tukey post-hoc test. Kruskal-Wallis test was used for immunohistochemistry, and P-value ≤ 0.05 was considered significant. The data were analyzed by the SPSS software, and the graphs were drawn by Excel 2007. 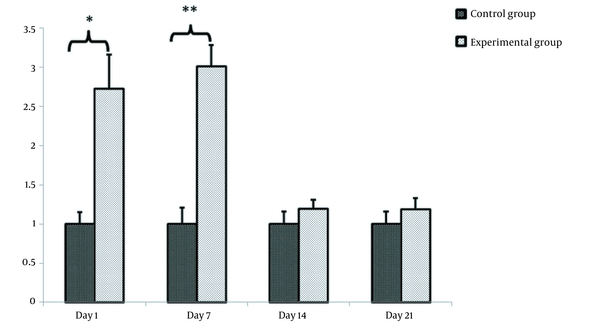 The maximum and minimum significant differences in the intensity of fibronectin reaction in the glomerular structure were observed between the experimental and control groups on days 1 (P = 0.031) and 7 (P = 0.035), respectively (Figure 2). 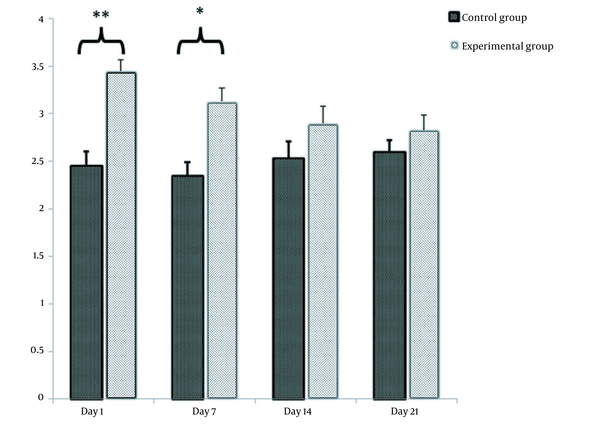 In other structures, including proximal and distal convoluted tubules, the intensity of fibronectin reaction was significant on days 1 and 7 (P ≤ 0.05 (Figures 3 and 4). 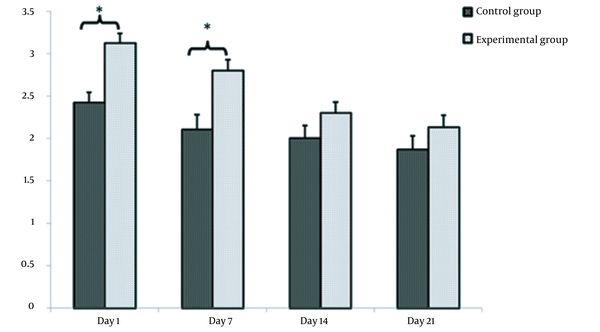 A comparison of the immunohistochemical sections of kidney tissues between two groups showed significant differences in important kidney structures, including ECM, glomeruli, as well as proximal and distal convoluted tubules on days 1 and 7 (Figure 5). 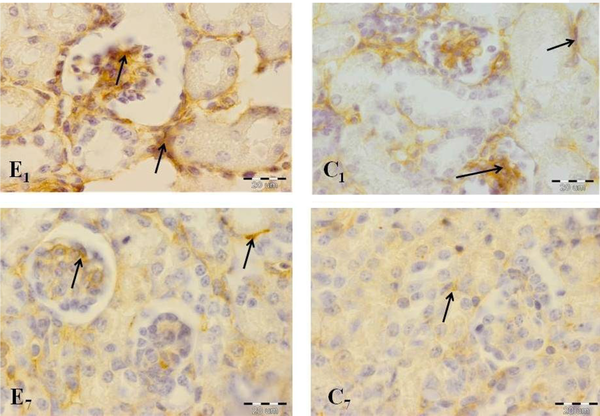 The results of the present study show that fibronectin expression alters in newborns on days 1 and 7. These findings can be justified by the fact that nicotine reaches the offspring through the placenta and milk during the embryonic and lactation periods and causes these significant changes on days 1 and 7, while from the first week onwards, offspring use food instead of breast milk and receive less nicotine. Given the similar results of our two studies on laminin and fibronectin, it seems that nicotine targets basement membrane components and may adversely affect newborns' kidneys. Alterations in the expression of collagen type IV, as another component of the basement membrane, have been reported (13).

Many studies have evaluated the harmful effects of nicotine on various structures, including kidneys. Votavova et al. reported a link between maternal smoking during pregnancy and kidney malformation. They found that kidneys were thicker and wider in fetuses with smoking mothers. A similar study showed that nicotine consumption during pregnancy caused morphometric changes, including weight loss in the kidney and decreased number of corpuscles (5).

Deng et al. reported that nicotine could inhibit matrix synthesis in the cartilaginous plate and reduce insulin-like growth factor expression resulting in delayed chondrogenesis, a decline in growth, and consequent weight loss at birth (7). The relationship between cytokines, such as transforming growth factor-beta (TGF-β1), and fibronectin expression have been previously reported, and the observed changes in fibronectin expression could be attributed to the effect of nicotine on these cytokines (15). TGF-β1, through downstream signals that belong to the protein family of Smads, initiates their activity by Smads2/3 phosphorylation (16). In this regard, Chou and his colleagues reported that nicotine upregulated TGF-β1 and collagen deposition in the hearts of neonates who received nicotine during fetal life (17). In smokers, fibronectin is highly expressed relative to other ECM molecules, which might result from nicotine activating intracellular signals in fibroblasts. The stimulatory impacts of nicotine are associated with the activation of protein kinase C and mitogen-activated protein kinase, increasing intracellular levels of cAMP and DNA phosphorylation.

Furthermore, it has been reported that nicotine raises nicotinic acetylcholine and nicotinic receptors expression on fibroblasts, hepatocytes, and cholangiocytes (18, 19). It seems that nicotine induces nephropathy by proliferating mesenchymal cells and increasing the expression of profibrotic cytokines and ECM proteins, such as TGF-β, fibronectin, and collagen. In addition, nicotine affects the evolution of kidneys by transforming epithelial cells into mesenchymal cells and upregulating connective tissue growth factors in the renal epithelium. Renal tubular damage that occurs in infants with smoking mothers (used in both pregnancy and lactation periods) may be the result of increased collagen expression (17). There are several other tissues in addition to the parenchymal tissue in the kidney, such as vessels, which have important basement membranes. Consequently, the adverse effects of nicotine may be related to changes in their basement membrane (20, 21).

Another study by Jaimes et al. in 2009 aimed to investigate the mechanism of action of nicotine in the development of acute nephritis. After inducing acute nephritis in rats, one group was given 100 U/mL of nicotine, and the other group received distilled water. After 14 Days, immunohistochemistry and western blot revealed that fibronectin was significantly upregulated in the nicotine group compared to the control group (22). In the current study, exclusively nicotine was investigated, while in addition to nicotine, cigarettes contain many other toxic and harmful substances, such as tar, each of which could have harmful effects (23).

Nicotine reaches infants through the placenta and breast milk, causing alterations in the fibronectin level of the basement membrane and ECM of important renal structures, including glomeruli and proximal and distal convoluted tubules. These changes may justify the renal abnormalities observed in offspring with smoking mothers.

We would like to thank all people who helped in our study.

Copyright © 2022, Author(s). This is an open-access article distributed under the terms of the Creative Commons Attribution-NonCommercial 4.0 International License (http://creativecommons.org/licenses/by-nc/4.0/) which permits copy and redistribute the material just in noncommercial usages, provided the original work is properly cited.
download pdf 5.72 MB Get Permission (article level) Import into EndNote Import into BibTex
Number of Comments: 0