The Effects of Tribulus Terrestris Extract and Endurance Training on Oxidative Stress and Apoptotic Markers in the Kidney Tissue of Rats, Poisoned with Arsenic

how to cite: Farokhi F, Peeri M, Azarbayjani M A, Hosseini S A. The Effects of Tribulus Terrestris Extract and Endurance Training on Oxidative Stress and Apoptotic Markers in the Kidney Tissue of Rats, Poisoned with Arsenic. Gene Cell Tissue. 2022;In Press(In Press):e131298. https://doi.org/10.5812/gct-131298.

Inorganic arsenic (As) has destructive effects on the kidneys. The exact mechanism and effects of Tribulus Terrestris (TT) and endurance training (ET) on renal apoptosis and oxidative stress are not quite clear.

The effects of ET and TT on apoptotic markers and oxidative stress were examined in the kidney tissue of rats, poisoned with As.

ET and TT, synergistically and/or alone, reduced oxidative stress and apoptotic markers in the kidney tissues of rats. A dose-dependent effect was observed for TT.

Inorganic arsenic (As) is one of the forms of As with destructive effects on various organs in the body; however, the kidney is one of the most sensitive tissues affected by this toxic substance (1). As poisoning increases reactive oxygen species (ROS), malondialdehyde (MDA), caspase-3, and dimethyl arsenic radicals, it decreases antioxidants, impairs lipid peroxidation, causes mitochondrial morphological changes and damage to DNA, and induces Cytochrome-C (Cyt-C) release and apoptosis in cells (2-4). In addition, increased ROS following As poisoning results in activation of the non-coding protein miR-199a-5p, cyclooxygenase-2 (COX-2), hypoxia-inducible factor-1α (HIF-1α), and DNA methyltransferase, which disrupts nuclear transcription (3-5).

The use of medicinal plants along with exercising can inhibit the possible impacts of oxidative stress and thus improve kidney disorders. Tribulus Terrestris (TT) has long been used in traditional medicine for the treatment of kidney diseases with beneficial effects on kidneys, possibly related to its anti-oxidative, anti-apoptotic, vasodilator, urea depletion, and kidney stone excretion effects (11). Research has shown that consumption of 500 or 300 mg/kg TT decreases the apoptosis index in renal tissue (11). In addition, 200 mg/kg TT extract decreased MDA, kidney injury molecule-1 (KIM-1), and caspase-3, while increased catalase, GPx, and superoxide dismutase (SOD) in renal tissues of gentamicin-induced nephrotoxic rats (12). Examination of the simultaneous effect of TT and endurance training (ET) has also shown that they can synergistically prevent possible injuries, caused by exercising (13) and improve body composition (14).

Environmental pollution causes several diseases, especially in the kidney, which has been the focus of attention of researchers to find the most effective methods for the prevention or treatment of these disorders. Considering inadequate information regarding the interactive effect of ET and TT on apoptosis and oxidative stress in the kidney, this study aimed to examine the effects of ET and TT, alone and in combination, on apoptotic markers and oxidative stress in the kidney tissues of rats poisoned with As.

To familiarize the rats with treadmill, the rats in the training groups were allowed to run on the treadmill for three sessions at a speed of 5 - 10 m/min each time with moderately intense training (50-55% VO2max) to be efficient physiologically efficient. For the initial training, the rats in the training groups ran on the treadmill five days per week (for eight weeks), which included three training days and one day of rest. The training sessions included five minutes of warm-up and five minutes of cooling at a rate of 4 - 5 m/min. These intervals were counted in the main training time. The rats then performed ET, five days per week, for two months at a speed of 23 m/min, 30 minutes each session (17).

The TT extract was prepared similarly to the protocol, explained in our previous study (18). In summary, the fruit was ground, and 100 gr of the powder was kept in 85 mg of 70% alcohol. After three days of allowing the solution to rest in the laboratory, it was filtered using a paper filter to separate the liquid and extract the dry extract. The dry extract was concentrated using normal saline, and specific doses were prepared to be given to the rats per day (16). 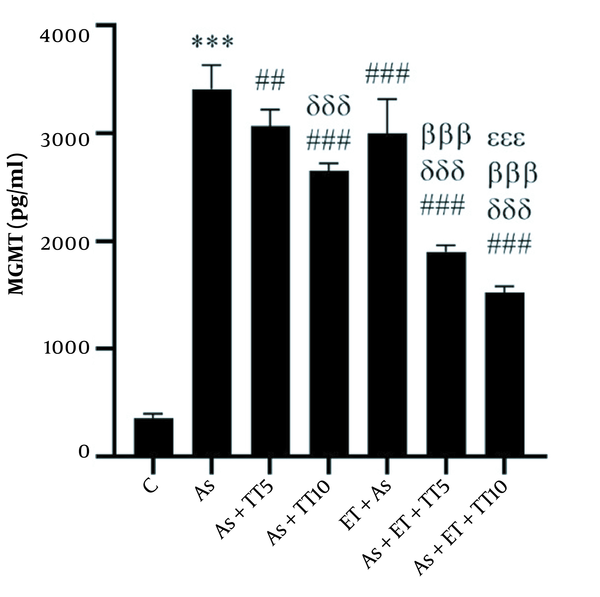 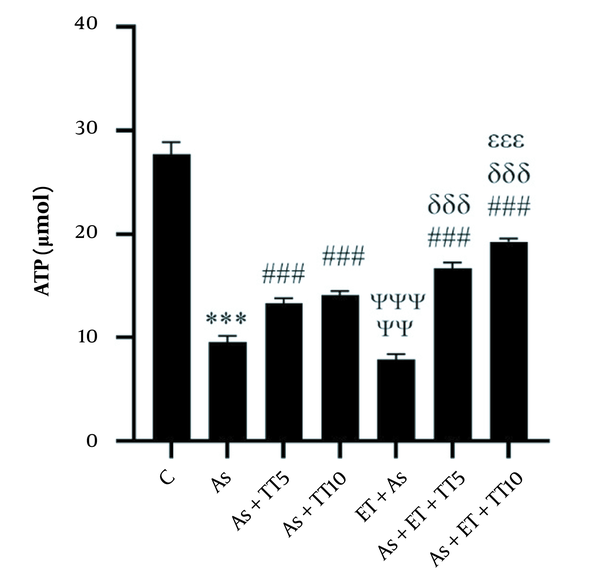 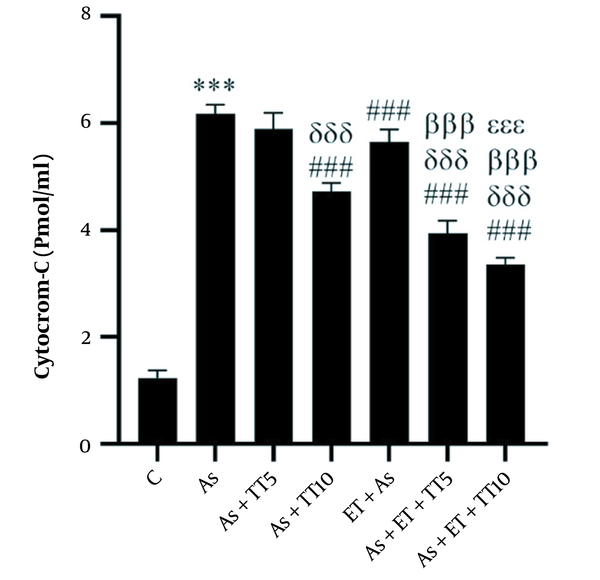 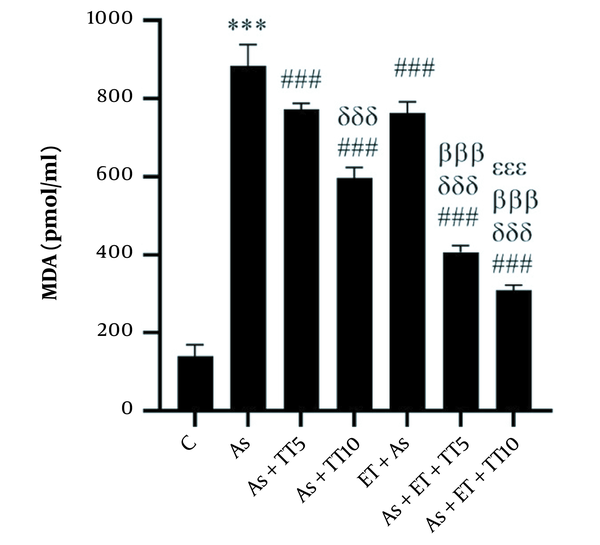 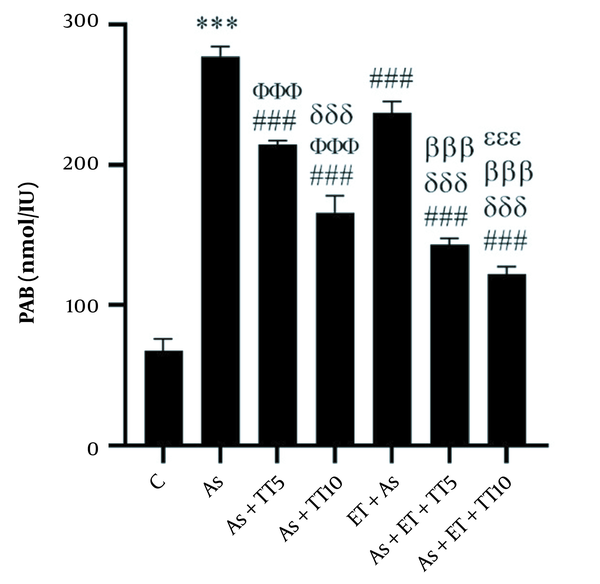 Histological evaluation of the renal tissue of rats showed that As increased MGMT, Cyt-C, MDA, and PAB and decreased renal ATP, which confirmed the renal damage, induced by As in rats. Therefore, the next comparisons were made with As group, as a successful sample of renal injury. This finding is consistent with previous studies, indicating nephrotoxicity and impaired renal function induced by As in rats (19, 20). Clinical research has also shown the association of kidney injury with environmental exposure to As (21). This effect is speculated to be generated by ions replacing phosphates in cells and binding to biological molecules to increase ROS (3). The increased radical dimethyl As and decreased antioxidants result in DNA damage, increased peroxidases and isoprostanes, and increased levels of cellular MDA levels (2). Mitochondrial complexes I and III, in the electron transfer chain, are sensitive to the increased O2- ions and inhibition of succinate dehydrogenase. NAD(P)H oxidase disrupts the process of uncoupling oxidative phosphorylation and causes damage to the mitochondrial membrane, which results in the release of Cyt-C, activation of miR-199a-5p, HIF-1α and COX-2, and impairs DNA methylation (3).

In this study, two interventions were considered, ET and TT. The five interventional groups were compared to show the effect of each intervention alone and in combination. The results showed that ET decreased renal Cyt-C, MDA, PAB, and MGMT in rats exposed to As, which indicates the favorable effect of exercise on oxidative stress in the body, which is in line with previous in vivo and in vitro studies (22, 23). As suggested, the effect of exercise on increased ATP levels and reduced Cyt-C, MDA, and PAB release is induced by regulating the renin-angiotensin-aldosterone system (24), reducing oxidative stress in apoptotic TNF receptors (25), reducing Cyt-P4A, increasing eNOS, activating NADPH oxidase (7), improving fat metabolism, regulating minerals, and increasing mitochondrial membrane stability (24, 26). The decrease in ATP levels following exercise is also speculated to be caused by the increased ADP/ATP ratio, which leads to increased cell charge, followed by the activation of biological mechanisms, which leads to increased nuclear transcription pathways and DNA repair (7, 24, 26). The results of our study are in line with another research, indicating modulation of the increased MGMT by exercise (five sessions of ET per week for eight weeks), decrease in Cyt-C, and increase in ATP and cardiac PAB in rats poisoned with hydrogen peroxide (H2O2) (26). High-intensity interval training also increased the expression of SOD and catalase and decrease renal Tnfrsf1b in rats with renal impairment (25), which is in line with the results of the present study. Others have also shown that eight weeks of exercise can inhibit oxidative stress and xanthine oxidoreductase activity, increased 20-hydroxyeicosatetraenoic acid and Cyt-P4A, while it has no effect on NAD(P)H in rats with salt-sensitive hypertension (7). Although the parameters measured differ from that of the present study, this study is in line with our results, considering the favorable effect of exercise on oxidative stress.

In addition to exercise, we also measured the solitary and synergistic effect of another intervention, namely TT, in two different doses to identify its effect on the studied biomarkers of oxidative stress and the most appropriate dose for this purpose. The results showed that TT5 and TT10 increased ATP levels and decreased renal MDA, PAB, and MGMT in rats, with a greater effect observed in the TT10 group compared with TT5. The main protective effect of TT against nephrotoxicity may be related to the antioxidative effects of this plant, namely inhibiting the release of calcium and Cyt-C by reducing blood nitrogen-urea (BUN) and creatinine, reducing KIM-1 and liver fatty acid-binding protein (L-FABP), and increasing GSH expression (reduced glutathione), catalase, and SOD in renal tubules, which improve oxidative phosphorylation and increase ATP in renal tissue (27). Activation of p38 mitogen-activated protein kinase (MAPK) also leads to activation of nuclear respiratory factor (NRF)1/2 that leads to increased expression of DNA repairing genes (28). Researchers indicated in one study that receiving 100, 200, and 300 mg/kg TT reduced the kidney damage markers, in a dose-dependent manner and enhanced the expression of antioxidants in the renal tissue of rats with renal impairment (27). Although the prescribed dose is much higher than that in our study, the general results are similar, identifying the favorable effect of TT on oxidative stress in the kidney of rats. In another study, seven weeks of TT administration (5% of the body weight) to laboratory rats increased the expression of SOD and glutathione peroxidase (GPx) and decreased thiobarbituric acid, BUN, and creatinine in rats with renal impairment (29). These results are also consistent with that of the present study; however, the measured biomarkers differed. Moreover, another study showed that TT at a dose of 2,000 mg/kg increased p38 MAPK expression and antioxidants and decreased damage to the renal nephrons (28). These results are also consistent with the results of our study, indicating the favorable effect of TT on renal damage, most possibly related to the anti-oxidative effect of this plant.

In addition, the evaluation of the synergistic effect of exercise and TT showed that the combination of ET and TT resulted in a greater effect on the measured parameters (decreasing MGMT, Cyt-C, MDA, PAB, and increasing ATP), as ET + TT5 had a greater effect than TT5 and TT10 alone. Also, the higher dose of TT (10) resulted in the greatest effect, when combined with EE (EE + TT10). As discussed, exercise reduces exogenous oxidative stress, the mechanism of which has been described earlier. Furthermore, the anti-oxidative mechanism of TT has also been described. Therefore, the combination of ET and TT results in synergistic effects on reducing apoptotic markers and oxidative stress. Others have also shown that ET along with receiving 1,250 mg/kg TT increased insulin-like growth factor (IGF)-1 and protects the skeletal muscle from injuries caused by strenuous exercise (13). It has also been demonstrated that the interaction of ET and TT also improves body composition and performance (30). These results are also consistent with that of the present study, indicating the synergistic effect of ET and TT.

Besides the strengths and novelty of this research, it had some limitations as well, including the figure, used to measure the variables, as measuring the markers along with pathological evaluations would result in more reliable findings.

The results of this study showed that ET and TT resulted in the reduction of the oxidative stress biomarkers and an increase in ATP, in renal tissue of rats with As-induced renal damage, both alone and synergistically; a greater effect was observed in a higher dose of TT and when combined with ET. The significant effect of TT on reducing renal damage in rats suggests this plant is a potent anti-oxidative to be used in future clinical trials, preferably in combination with exercise.

The authors appreciate the support of the scientific vice-chancellor of the Islamic Azad University, Tehran Center Branch.

Copyright © 2023, Author(s). This is an open-access article distributed under the terms of the Creative Commons Attribution-NonCommercial 4.0 International License (http://creativecommons.org/licenses/by-nc/4.0/) which permits copy and redistribute the material just in noncommercial usages, provided the original work is properly cited.
download pdf 848.08 KB Get Permission (article level) Import into EndNote Import into BibTex
Number of Comments: 0