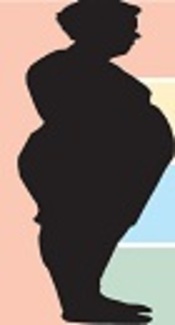 Obesity is an energy imbalance disorder that happens due to deficiency of energy intake and consumption. Leptin is an important hormone that regulates energy expenditure. Leptin through its receptors located in the hypothalamus regulates appetite and energy consumption.

In this study we tried to determine the association of leptin receptor (LEPR) gene polymorphisms (rs1137101), Lys223Arg and Gln109Arg (rs1137100), with overweight and obesity.

We examined the two polymorphisms in 240 subjects consisting of obese, overweight, low-weight, and normal weight (as control) subjects among students of Zanjan Islamic Azad University. For Genotyping, we used PCR-RFLP. Statistical analysis was performed using t-test and chi-square test to show any significant difference between the groups.

In our population, Lys223Arg polymorphism of LEPR gene was associated with obesity; Gln 223 of leptin receptor gene was located in the extra cellular part of receptor and substitution of Glu by Arg in this position might affect leptin signaling. Lys/Arg heterozygote might have protective effects.

Obesity is a major public health problem throughout the world. It is a chronic imbalance between energy intake and energy expenditure. Obesity can result from complex interactions between genetic and environmental factors. Several genes are known to contribute to obesity.

The genetic factors that regulate appetite and energy homeostasis are important factors in controlling weight gain and obesity (1). Polymorphisms and mutations in those genetic factors could cause obesity and disruption of energy homeostasis (2). One of the most important factors in the hormonal regulation of energy intake and consumption is leptin, which is responsible for transferring information related to controlling energy intake, food, metabolism, and energy expenditure (3).

Leptin (LEP) is a polypeptide hormone with some structural similarities to long-chain helical cytokines. It is an adipocytokine secreted from adipose tissue and in small amounts from other tissues. LEP is associated with body mass and fat composition by regulating appetite and energy balance and co-regulating some other biological functions.

LEP by its membrane-localized receptors (LEPR) acts on target tissues. LEPR displays a structural similarity with the class I cytokine receptor family (2). LEPRs are primarily expressed in the brain and hypothalamus, but they are also widely distributed in peripheral tissues including the adipose tissue, liver, kidneys, pancreas, and gonads. LEPR gene is located at chromosome 1p31. Mutations in this gene could be associated with obesity and pituitary dysfunction (4). The results of alternative mRNA splicing and posttranslational processing have shown several receptor isoforms (LRa, LRb, LRc, LRe, and LRf) that the long isoform, LRb, was more involved in signal transduction (5).

The hypothalamus containing two types of neurons detects leptin. One type expresses appetite suppressing peptides derived from pro-opiomelanocortin (POMC) precursors and the other type produces appetite stimulating peptides such as neuropeptide Y (NPY) and agouti-related peptide (AgRP) (7, 8). There can be different causes for disorders in leptin physiological function. Study of mutations and polymorphisms of leptin and leptin receptor genes in the humane and animal models proved the relationship of this protein with obesity (9).

In many cases, the cause of obesity is not due to defects in leptin, but the problem is leptin resistance. Leptin resistance may be created under the influence of various factors, such as defects in the signaling by leptin, lipotoxicity, and endoplasmic reticulum stresses as well as inflammatory reactions that can disrupt intracellular transport of messages (5). If leptin cannot effectively bond to its own receptors in the brain (hypothalamus), there will create disruptions in the transmission of messages through NPY, AgRP, and reduction of POMC expression simultaneously. This might be associated with severe obesity and different physiological disorders such as Type 2 diabetes (T2D), high blood pressure, insulin resistance, cardiovascular disease, and asthma (7).

LEPR mutation is a very rare condition that is not observed in many obese individuals as homozygote genotype (12, 13). Lys 109 Arg (K109R) (rs1137100) Polymorphism of lepR gene in exon 4 by displacement of adenine with guanine in codon 109, and case displacement of lysine amino acid with arginine in extracellular part of receptor might be a reason for leptin ability to bind to the receptor (14).

Gnl223grA (rs1137101) polymorphism may result from displacement of adenine with guanine in nucleotide 668 of codon 223 in exon 6. This causes the replacement of positively charged arginine by negatively charged glutamine amino acid. This amino acid change in extracellular domain of receptor might cause defects in leptin binding and signaling (15).

In this study, we investigated the association of LepR gene Lys 109Arg and Gnl223Arg leptin polymorphisms with obesity and overweight in a young student population of Zanjan Islamic Azad University.

Table 1. Descriptive Data of all Volunteersa

aSignificant (P < 0.05). Values are expressed as mean ± standard deviation (SD), and were compared by t-test.

Table 2. The Specific Primers and Restriction Enzymes for Polymorphisms Gln223Arg and Polymorphism Lys109Arg

PCR was performed at 95°C for 5 minutes as a hot start and 95°C for 60 second, 57°C for 60 second, and 72°C for 60 second, in 35 cycles, with a final extension step at 72°C for 8 minutes in the presence of Taq DNA polymerase master mix (Ampliqon). PCR products size was confirmed through 2% agarose gel electrophoresis and ethidium bromide staining.

All statistical analyses were performed using the statistical package for social sciences (SPSS) version 18.0 (SPSS Inc., Chicago, IL, USA). Descriptive data were given as mean ± standard deviation (SD). The associations of BMI and other parameters with genotypes were incestigated using independent samples t- test. A case-control study was designed to compare patients (who were low-weight, overweight, or obese) with controls (who had normal weight). Statistical significance was defined as the probability of P < 0.05.

240 students (65 women and 175 men) were recruited from Zanjan Islamic Azad University and invited to participate in the study. There was no significant difference in age of subjects. There were significant differences in BMI between the normal group and low-weight, overweight, and obese groups (P < 0.05).

Table 3. Genotypic and Allelic Distribution of Leptin Receptor Polymorphism of Lys 109 Arg in the Study Groupsa

Table 4. Genotypic and Allelic Distribution of Leptin Receptor Polymorphism of Gln223Arg in the Study Groupsa

The obesity and overweight occur severely under the environmental factors and life circumstances, but the role of genetic factors is undeniable as determining factors. Any factor that impresses weight, by regulating metabolism and appetite, could be effective for study of obesity results.

In fasting and weight loss process after a long time diet, leptin level drops to regulate energy intake and expenditure and energy homeostasis (16).

Leptin regulates the energy and food consumption through interaction with its own receptors in the target tissues, and one of the most important target tissues is central nervous system (CNS), which regulates the appetite and energy consumption through the Ob - Rb receptor located in the hypothalamus (6). The lack of proper leptin interaction with its own receptor in the hypothalamus may disrupt the leptin signaling, and the obesity can occur due to the disruption of intake and consumption balance of energy, which may lead to blood pressure, type 2 diabetes, and cardiovascular disorders, as well (7).

In many cases, the cause of obesity is not due to defects in leptin, but the problem is the leptin resistance. Leptin resistance may occur due to various factors, such as disruption in leptin signaling, lipotoxicity, and endoplasmic reticulum stress as well as inflammatory reactions that can disrupt the transmission of intracellular messages (5).

Lys109Arg polymorphism with substitution of nucleotide A by nucleotide G in the second position of codon 109 (AAG > AGG) causes replacement of lysine amino acid by arginine which may be effective in the connection of leptin with its own receptor (2).

This might alter leptin binding and therefore, receptor dimerization and signaling capacity of the leptin receptor. In our study population, the frequency of A allele was higher than the frequency of G allele and it might be the reason that we observed no significant correlation between G allele and obesity or overweight. However, such mutations are extremely rare and data in literature concerning the association between Lys109Arg polymorphism and obesity are controversial among different ethnic populations (15, 17, 18). If we could study more samples from different ethnic groups of Iranian population, G allele or GG genotype would have a significant correlation with obesity or overweight.

Mutation in codon 223 causes the substitution of A by G in the second nucleotide of codon (CAG > CGG) and Glutamine conversion to Arginine. In the study of this polymorphism, we found that the frequency of AA genotype in the obese group (86%) was significantly higher than the frequency of the normal group (46.6%). Nevertheless, AG genotype was more frequent in the normal group (51.7%) than the obese (8.4%) (P = 0.003) and overweight (33.4%) (P = 0.040) groups. There was no significant difference between GG genotype frequencies in the study groups and allelic frequency was not significantly different in the study groups, as well. AG genotype and presence of Gln and Arg might have protective effects against obesity and overweight. Due to the low frequency of G allele in our study group, we could not investigate the exact correlation of G allele or GG genotypes with obesity. In some other ethnic groups, researchers reported Gln223Arg polymorphism could have a critical role in obesity and overweight (17-19).

Our study had limitations due to the small sample size that did not allow including gender as a grouping criterion. Our study subjects were students of Zanjan Islamic Azad University from different ethnics of Iranian population. If we could study different ethnic groups, the results would change.

Polymorphisms rs1137100 (K109R) were not correlated with obesity phenotype in our study population although rs1137101 (Q223R) in LEPR gene was correlated with the phenotype of obesity. Therefore, it can be concluded from this research that

Copyright © 2017, Gene, Cell and Tissue. This is an open-access article distributed under the terms of the Creative Commons Attribution-NonCommercial 4.0 International License (http://creativecommons.org/licenses/by-nc/4.0/) which permits copy and redistribute the material just in noncommercial usages, provided the original work is properly cited.
download pdf 122.67 KB Get Permission (article level) Import into EndNote Import into BibTex
Number of Comments: 0