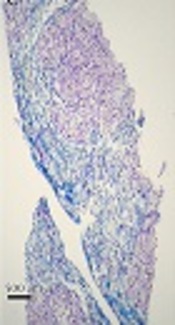 Cholesteryl ester storage disease (CESD) is a disorder in which cholesteryl esters (CE) and triglycerides (TG) are preserved particularly in hepatocytes. The exact clinical manifestation is not known due to a lack of sufficient data. The current study presents 3 new cases of CESD with 2 of them being siblings. All had perturbed serum low-density lipoprotein (LDL), lactate dehydrogenase (LDH), triglyceride, and cholesterol. Hepatosplenomegaly was seen in all the patients. Liver biopsy showed fat storage in hepatocytes. Adrenomegaly or adrenal calcification, portal hypertension, esophageal varices, and hepatic scarring were not observed in any of the patients. Histopathologic features of CESD, including fat storage in hepatocytes, could characterize these patients.

Cholesteryl ester storage disease (CESD) is caused by lysosomal acid lipase (LAL) deficiency. The true prevalence of CESD is unknown because many cases are underdiagnosed, however, a rough estimation of 1/90,000 to 1/170,000 has been noted. The CESD is known as a cause of familial hypercholesterolemia (1). The basis of this disease is on the mutation of exon 8 splice junction mutation (E8SJM) in the lysosomal acid lipase gene (LIPA), which is a 23-Kb gene located on chromosome 10q23.31. The LIPA encodes for the 399 amino acids lysosomal enzyme via a 2.6-kb mRNA (2). The LAL enzyme is responsible for hydrolysis of Cholesteryl Esters (CE) and Triglycerides (TG) within apoB lipoproteins.

The CESD represents within a wide age spectrum, from infancy to adulthood. Generally, the disease manifests when the range of CE is 1% to 12% (3). The pathology may be seen in adrenal, intestinal, smooth muscles cells, as well as macrophages. In particular, CE and TG are stored in hepatocytes. Increased fat storage in hepatocytes results in inhibition of 3-hydroxy-3-methylglutaryl coenzyme A (HMG-CoA) reductase and promotion of cholesterol synthesis. These in turn lead to elevation of serum LDL-cholesterol and TG, and reduction of serum HDL-cholesterol (4).

Liver biopsy samples are bright yellow to orange in color (5). Kupffer cells are histologic indicators, which are seen in a field of swollen hepatocytes with micro vesicular steatosis. Lipid accumulation in hepatocytes causes histologic changes, such as fibrosis and cirrhosis (6, 7). Therefore, impaired liver function tests, such as increase in serum transaminases, alanine aminotransferase (ALT) and/or aspartate aminotransferase (AST) are expected (8). Moreover, cirrhosis complications, such as portohepatic hypertension, esophageal varices, gastrointestinal hemorrhage, and ascites may be seen in patients with CESD. If hepatic failure appears, the disease will be fatal. These patients are at a higher risk of atherosclerosis and ischemic diseases. Aneurysm is another cardiovascular manifestation. Nausea, vomiting, diarrhea, steatorrhea, gastric discomfort, malabsorption, growth retardation, and anemia are other symptoms. Hepatocellular carcinoma and adrenal calcifications are uncommon presentations (9). The diagnosis is based on LAL enzyme level assessment, LIPA gene mutation detection, and/or histopathologic changes in liver biopsy samples.

Therapeutic options vary from administration of cholesterol reducing agents, such as 3-Hydroxy 3-Methyl Glutaryl (HMG) CoA reductase inhibitors to bone marrow and liver transplantation. Enzyme replacement therapy is an innovated strategy, which has shown successful outcomes in vitro (10). The epidemiology and manifestations of this disease is still unknown due to the lack of sufficient reports. This paper described 3 patients with CESD from a single center in Southeast of Iran.

Case 1: The patient was a 10-year-old female diagnosed in 2016. She was the first child of a couple, who were not relatives. Hepatosplenomegaly was observed in abdominal sonography. Liver biopsy demonstrated fatty micro-vesicles in plump hepatocytes. These vesicles were seen in all hepatocytes and some Kupffer cells (Figure 1A and 1B). Portal areas were fibrotically expanded forming portal-portal bridges and occasional incomplete nodules (Stage 4, Figure 1C). Clusters of foamy macrophages were seen in portal areas (Figure 1D). There was no significant inflammatory infiltrate in portal area (0 - 1) or evidences of hepatitis (0). There was only mild infiltration of lymphomononuclear cells in a few portal areas. Few foci of intra lobular inflammatory cells were also seen. The liver needle biopsy showed changes compatible with lipid storage disease (cholestryle ester storage disease). Moderate portal fibrosis at stage 4/6 was observed without any significant portal inflammation.

A, B, Fat micro-vesicles in hepatocytes and Kupffer cells; fibrotic transformation and bridge structures in portal areas; C, clusters of foamy macrophages resided in areas; D.

Case 2: The patient was a 4-year-old male identified in 2016. He was the brother of case 1 and the second child of the couple mentioned above. Elevated cholesterol and TG were detected in lipid profile. Hepatosplenomegaly was noted in abdominal sonography. A liver biopsy was obtained showing presence of plump hepatocytes filled with micro-vesicles of fat (100% of hepatocytes, Figure 2A and 2B). Portal areas were fibrotically expanded forming short septate and occasional portal-portal bridges (Stage 3 and Figure 2C). Clusters of foamy macrophages were seen in portal areas (Figure 2D). There was no significant inflammatory infiltrate in portal areas (grade 0 - 1) or interface hepatitis. There was only mild infiltration of lymphomononuclear cells in a few portal areas. Similar to case 1, few foci of intra lobular inflammatory cells were seen (grade 2). Liver Needle biopsy showed changes compatible with lipid storage disease (cholestryle ester storage disease). Mild to moderate portal fibrosis was also seen (stage 3/6) with no significant portal inflammatory process.

A, B, Nearly all hepatocytes were filled with fatty micro-vesicles, fibrotic changes along with occasional bridge and septate formation in portal areas; C, and clusters of foamy stuffed macrophages within portal region; D.

Case 3: The patient was an 8-month-old girl diagnosed in 2016. She was the first child of a couple, who were not known as relatives. She had experienced urinary tract infection on the first month of life and gastrointestinal infection on the 4th month after birth. At the age of 8 months, she had experienced Urinary Tract Infection (UTI) with severe fever and night sweating. No icter was observed. Complete blood count showed lymphocytic absolute leukocytosis. Peripheral blood smear showed no significant abnormal cell except for reactive lymphocytes, which were not diagnostic. Liver biopsy was implemented at age of 8 months and demonstrated fat storage in hepatocytes (Figure 3). The abdominal sonography showed hepatosplenomegaly, in which the liver had spread within the pelvic area and spleen through the abdomen.

The CESD is an uncommon lysosomal storage disorder in which patients experience fatigue, malabsorption, growth retardation, abnormal liver function tests, hepatic failure, atherosclerosis, and cardiovascular disorders. Pathologic and biochemical features of CESD patients has not been stablished since there are low number of reported patients. In all 3 cases reported in the present study, elevated serum level of LDL, cholesterol, and TG alongside with decreased HDL were observed. These findings are in accordance with characteristics previously reported for CESD patients (11-13). The role of membrane transporters in deregulated levels of lipid derivatives has been proposed. In a study of 3 CESD cases, it was shown that cells derived from these patients had lower capacity for transport of HDL, and perturbed HDL efflux capability (13). Thus, hypercholesterolemia may actually be the sole presentation in CESD patients (14). Regarding the high ratio of LDL: HDL that has been related to the risk of cardiovascular diseases, patients with CESD have higher risk of such conditions (9). Despite elevated levels of LDL, cholesterol, HDL, and TG, no evidences for atherosclerosis were observed in the patients. Nevertheless, using lipid-correcting agents, such as statin, is currently in clinical practice for CESD patients rendering lower risk of cardiovascular disease (15). There is a need for further evaluation of risk factors associated with cardiovascular disease and mechanisms of lipid dysregulation in CESD patients.

Another pathological feature in patients with CESD is a significant fat storage in hepatocytes, Kupffer cells, and macrophages in liver biopsies. This was also clearly observed in the present cases, which is in accordance with the findings of previously reported patients with CESD (11, 12). In addition, formation of portal bridges was a feature in liver biopsies in the mentioned cases, which was similar to the findings of 3 previously reported cases by Sjouke et al. (14).

The authors found that liver enzymes had increased serum level in all of the three patients in current report. This is in line with the findings of Hoeg et al. (16). Hepatic pathology in patients with CESD could progress to more serious conditions such as cirrhosis (17). Regarding these findings, liver biopsy findings seem to be a reliable procedure for diagnosis of CESD.

Clinical presentation of patients with CESD varies significantly. Hepatosplenomegaly is a common finding in CESD and was seen in the patients of the current report. In line with this, hepatosplenomegaly was also the presenting symptom in a 2-year old CESD male reported by Dalgic et al. (5) According to Donna L. Bernstein et al. hepatomegaly might be seen in 99.3% and splenomegaly in 74% of CESD patients (3). Nevertheless, hepatosplenomegaly is not a universal finding in patients with CESD patients (14). Patients with CESD may also suffer from gastrointestinal discomfort and chronic diarrhea (18, 19). Diagnosis of CESD may be complicated considering that clinical features may resemble other clinical conditions, such as fatty liver disease (18). In fact, the degree of LIPA enzymatic loss is the main factor that influences both clinical severity and time of disease occurrence (20). Due to variable presentation, it is advisable to consider CESD in patients with unexplainable orgonomegallies.

Adrenal calcification, adrenomegaly, hepatic scarring, and portal hypertension were not observed in any of the current patients. This was, however, in contrast with the report of CESD in 3 siblings, in which portal hypertension was reported in all cases. Furthermore, 2 of the recent cases had experienced hepatic scarring. These 2 had expired. The older child experienced esophageal varices and aortic disorders. The younger child, who had survived till the age of 13 presented adrenal calcification (12). More patients are required to be reported to confirm if the above-mentioned complications could be pathological features in patients with CESD patients.

The limitation of the current study was unavailability of genetic information regarding LIPA mutations of the patients and their family members.

Hepatosplenomegaly is a common clinical finding in patients with CESD. Liver biopsy, as a reliable method, could show significant fat storage in hepatocytes, Kupffer cells, and macrophages. Elevated LDL, cholesterol, and TG accompanied with reduced HDL level in biochemical assessment may further support the diagnosis of CESD. It is recommended to use a multifactorial approach to correctly diagnose this condition.

Copyright © 2017, Gene, Cell and Tissue. This is an open-access article distributed under the terms of the Creative Commons Attribution-NonCommercial 4.0 International License (http://creativecommons.org/licenses/by-nc/4.0/) which permits copy and redistribute the material just in noncommercial usages, provided the original work is properly cited.
download pdf 5.17 MB Get Permission (article level) Import into EndNote Import into BibTex
Number of Comments: 0