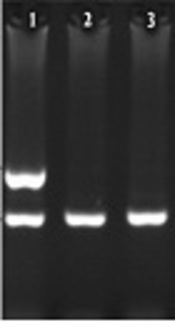 Multiple sclerosis (MS) is known as chronic inflammatory causes demyelination and results in neurodegenerative disease in central nervous system (CNS), which is known with progressive disability. MS is accepted and is a multifactorial disorder that is a result of genetic and environmental factors interaction. The set of genes coding for MHC (major histocompatibility complex) molecules exert the effect on disease development. HLA-A*03 (HLA-A3) is one of HLA class I alleles, which is associated with MS.

Our goal is to survey the frequency of this allele in MS patients from the Khuzestan province.

HLA-A*03 alleles association was investigated in 200 MS patients in the province of Khuzestan then compared with 195 healthy controls. HLA-typing was performed by polymerase chain reaction (PCR) amplification with SSP-PCR method.

Frequency of HLA-A*03 was significant among MS patients (47% vs. 26%, P < 0.001). There was no significant correlation among this allele and sex, course of disease, initial symptoms, and expanded disability status scale (EDSS).

Our findings suggested that HLA-A*03 allele has a significant association with MS, which is in line with other studies, and also confirmed that the presence of this allele could increase the risk of MS. Furthermore, positive association between the HLA-A*03 allele and the Arab population in the province of Khuzestan was found. CIS patients followed up for three years demonstrated that all patients were converted to RRMS.

MS is clinically separated into four diverse categories: RRMS (relapsing-remitting), SPMS (secondary-progressive), PRMS (progressive-relapsing), and PPMS (primary-progressive) (5). A total of 85% of individuals who identified with MS have primary signs or attacks, which is mentioned to clinically isolated syndrome (CIS). Average onset of MS is between 20 and 40 years old (5). The MS incidence in childhood and after the age of 50 is rare (6). The peak of MS incidence is around the age of 24 (7). Women have two or three-fold more prevalence of multiple sclerosis than men (6).

Both environmental and genetic factors trigger MS (8). The first idea regarding genetic factors was raised in the 1890s (9, 10). In the 1920s, worldwide investigation of MS prevalence demonstrated a racial and ethnic difference, which may indicate a genetic influence (11).

Major histocompatibility genes, such as HLA, are integrated in normal immune response. The term HLA refers to the human leucocyte antigen system (12). Several of these genes play leading role in numerous immunological progressions (13).

Certain alleles of HLA have been studied in MS susceptibility. HLA-A3 (HLA-A*03) is one allele of class I HLA, which is firmly related with MS (1).

HLA-A*03 frequency in the Khuzestan province has not yet been reported. Ethnicity diversity in Khuzestan and limited published data for local Arabs and nearby located Arab countries is the turning point of our data.

Our goal was to consider the association between HLA-A*03 in MS patients and healthy controls from the Khuzestan province as well as study this allele in different ethnicities (Arab and Persians). Furthermore, we examined the possible relationship of HLA-A*03 allele with course of disease, primary symptoms, and EDSS.

A total of 200 MS patients, according to the McDonald criteria, confirmed in the Khuzestan multiple sclerosis society, were studied in Shahid Chamran University, (159 females and 41 males with the mean age as 32.2 years and age range 16 - 57). Clinical symptoms estimation was conduct by expert neurologist. Furthermore, we included 195 unrelated healthy controls excluded for any possible autoimmune-disease and history of MS in the family to this study (165 women and 30 men, mean age was 27.4, and age range was 14 - 63). The control group was selected from the same geographical zone and matched with patients on characteristics such as ethnicity, gender, and age. All contributors were informed regarding the aim of the study and consent form were completed by all.

A total of 5 mL of blood was drawn with the consent of patients and controls and collected in EDTA tube.

HLA-A*03 allele in MS patients and health controls was investigated by sequence specific primer polymerase chain reaction (SSP-PCR). Primers sequences was applied to amplify the HLA-A*03 designed according to IMGT/HLA database (http://www.ebi.ac.uk/) and checked out by NCBI/blast database (www.ncbi.nlm.nih.gov). Forward and reverse primers sequences for HLA-A*03 was: Forward: 5’-AGCGACGCCGCGAGCCA-3’ and Reverse: 5’-CACTCCACGCACGTGCCA-3’. The size of PCR product was 630 bp.

Touchdown PCR method was used to increase the specificity of primer annealing. PCR conditions are shown in Table 1.

To examine the susceptibility of HLA-A*03 allele in MS disease, χ2 was calculated and Fisher’s exact test was accomplished using SPSS for Windows V. 22.0. P value less than 0.05 was accepted as significant.

HLA-A*03 allele was compared in 200 patients with 195 healthy controls by SSP-PCR method. Demographic and clinical profiles of MS patients and controls is illustrated in Table 2.

HLA-A*03 allele frequencies were more significant in the patient than control group (P < 0.001). Results are shown in Table 3 and agarose gel electrophoresis (PCR image) is shown in Figure 1.

Table 3. Frequency of HLA-A*03 Allele in MS Patients and Controls

We compared this allele in different ethnicities, Arab and Persian patients, and found the significant differences between them (Arab patients have more HLA-A*03 allele, (P = 0.001), since this significance not seen in healthy controls). This result is shown in Table 4.

In 1970s, linkage analysis indicated diverse variations in HLA loci, which affect the susceptibility of MS (14-16). The ﬁrst discovered loci was HLA-A*03 and HLA-B7 genes (17). In the recent two decades, susceptibility loci for MS, through the HLA region, were replicated in numerous populations. Supplementary influence of class I HLA loci (HLA-A*03) doubling the risk for MS has been described (18). A study performed in Spain in 2005, indicated that frequency of HLA-A*03 allele was 41% in MS patients and 24% in health controls (18). The study performed by Harbo et al., in 2004, indicated that the combination of HLA-DR15 and HLA-A3 alleles have a high significant association with MS (19). In 2012, Kankonkar et al., reported HLA-A, B, C and DQB1, DRB1 frequency in MS patients in India and the HLA-A*03 allele indicated a significant association with MS (20).

In this study, we genotyped MS southwest Iranian patients with evaluation of HLA-A*03 significance in these patients.

We found that HLA-A*03 frequency in these patients is significantly high. Females are more susceptible for MS than males. In comparison to other studies, our study confirmed that the existence of this allele can increase the risk of MS in southwest Iranian population.

The most common symptoms of this disorder involve interruption of vision, motor and sensory systems, coordination and balance (brainstem-cerebellum), bowel/bladder/sexual, and cognition (2, 3). In this study, the effect of HLA-A*03 loci on clinical variables such as sex, course of disease, initial symptoms, and EDSS was evaluated. All of them showed no significant relation with HLA-A*03, which is in line with the study of Bayati et al., in 2008, in Iran (21).

According to the results of Sharafaddinzadeh et al., incidence and prevalence of MS is low among Arab people in comparison with the Persian (non-Arab) part of the Khuzestan province population (22), that is why we studied the HLA-A*03 in different ethnicities (Arab and non-Arab) and found a significant association between this allele and Arab patients.

We studied MS courses in these patients as a clinical symptom. This criterion is determined by the treating physician based on factors such as the number of attacks and the distances between them, during the course of the disease, the severity, and speed of progression. In this population, more than 80% of patients showed RRMS, while RPMS have less frequency, which is in line with other studies (23).

CIS is the result of only one incident of demyelination in one area, or several areas of the CNS, which lasts for at least 24 hours. Individuals who experience CIS may or may not go on to develop MS (24). From the patient population that we studied, 10 were diagnosed as CIS. We’ve followed these patients for three years and observed that all of them have been converted to RRMS.

Since the HLA-A*03 allele frequency is significantly high in southwest Iranian MS patients, there is probably a positive connection between this allele frequency and MS susceptibility in this population.

We observed that patients with Arab ethnicity are less than Persians, however, HLA-A*03 in Arabs are significantly more than Persians patients. Therefore, we can probably evaluate the HLA-A*03 allele as one of the MS susceptibility factors in Arabs.

In general, our purpose is to determine the simple part of the genetic proﬁle of MS in the province of Khuzestan. We think that HLA-A*03 can be suggested as a potent genetically effective factor in the MS population.

Furthermore, more researches on additional HLA alleles and larger population are needed to recognize the role of MHC alleles in MS patients as well as find other genetic risk factors to help us identify the MS susceptibility.

We are thankful for all the healthy individuals and MS patients who participated in our study. The authors would also like to appreciate the Department of Genetic of Shahid Chamran University of Ahvaz and Khuzestan Multiple Sclerosis Society (MSS) for their collaboration.

Copyright © 2018, Gene, Cell and Tissue. This is an open-access article distributed under the terms of the Creative Commons Attribution-NonCommercial 4.0 International License (http://creativecommons.org/licenses/by-nc/4.0/) which permits copy and redistribute the material just in noncommercial usages, provided the original work is properly cited.
download pdf 212.64 KB Get Permission (article level) Import into EndNote Import into BibTex
Number of Comments: 0