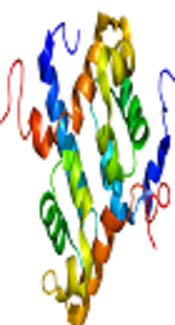 Recently, findings have validated the significant role of DNA damage genes related to the pathogenesis of breast cancer (BC). The aim of the present investigation was to evaluate possibility roles of two common XRCC1 (rs25487; A > G) and ERCC1 (rs3212964; A > G) gene polymorphisms with the risk of sporadic BC.

In a case-control study, consisting of 100 females identified with sporadic BC and 100 malignancy-free females as the control group. We used Tetra-ARMS Polymerase Chain Reaction (PCR) and PCR-Restriction Fragment Length Polymorphism (RFLP) methods to determine genotype frequencies of XRCC1 and ERCC1 genes.

The current results provide evidence against the hypothesis that XRCC1 (rs25487) and ERCC1 (rs3212964) gene polymorphisms may be associated with a predisposition to sporadic BC.

Breast cancer (BC) is the most prevalent type of malignancy in females, with two patterns, including hereditary and sporadic (1). The environmental risk factors, consist of ionizing radiation (IR), carcinogenic components, heterocyclic aromatic amines, alcohol consumption, and free radicals (2, 3). Genetic factors are compound conditions of BC (4). During DNA damage, eukaryotic cells use appropriate processes to repair multiple forms of DNA damages to protect genome stability and integrity. Repairing pathways have significant roles in maintaining genomic integrity in comparison with carcinogenic components and mutagens (5). During exposure of DNA to IR, the double-stranded DNA may be broken and this increases the risk of BC progress (6). In humans, base excision repair (BER) and Nucleotide Excision Repair (NER) comprised of the two most common DNA repair mechanisms (7, 8). In BER systems, there are eleven DNA damage special proteins that contribute to a specific function. Among these components, X-ray repair cross-complementing group 1 (XRCC1) participates in the BER system (9, 10). Another significant molecule, excision repair cross-complementation 1 (ERCC1), which encodes an ERCC1 protein, is involved in the NER pathway, eliminating significant DNA damage generated through environmental agents including toxic compounds or ultraviolet (10). Genetic variations, such as single nucleotide polymorphism (SNP) may exchange amino acids or modify DNA conformations, which is related to cancer risk or human disorders (11, 12). Single nucleotide polymorphism molecular analysis could facilitate prognosis, diagnosis, and remedy of human disorders (13). With the crucial roles of DNA repairing machinery components in human genome integrity, it is possible to reveal significant appearances of nucleotide changes in the DNA repair genes and the risk of malignancies (14). Preliminary investigations have shown several SNPs in the XRCC1 and ERCC1 genes involved in tumorigenesis. According to previous considerations, findings have revealed contradictory results regarding several diseases and different ethnic geographical regions (15-17). To provide greater insight regarding the association between particular SNPs in the XRCC1 and ERCC1 genes in the tumorigenesis of BC, this study aimed at evaluating the associated between XRCC1 (rs25487) and ERCC1 (rs3212964) gene polymorphisms and the risk of sporadic BC in females of the northwestern of Iran.

In a case-control investigation, we recruited 100 females, who had been referred to the Omid hospital of Urmia, Iran. All cases were diagnosed as having histologically sporadic BC (mean age 44.69 ± 5.12 years), and 100 age-matched healthy females (mean age 44.5 ± 6.5 years), who attended the related hospital for conventional physical assessment, were registered as the control group, during June 2015 to April 2017. All individuals were from the same geographic province. The clinical features of each participant, including history of smoking, drinking, BRCA1/BRCA2 gene mutation status, and other malignancy history, was collected through a survey and signed informed consents were obtained from all participants. Exclusion criteria comprised of having metastasized carcinoma or identified mutations in the BRCA1/BRCA2 genes, and having received a radiotherapy or chemotherapy regimen. This study excluded all samples, which did not have the criteria of the community before genetic variant analysis. The ethical review board of Omid hospital of Urmia approved the investigation.

We selected two common SNPs in XRCC1 (rs25487) and ERCC1 (rs3212964) genes to evaluate the genetic susceptibility of sporadic BC. The genomic DNA was collected from white blood cells using the salting-out method reported by Miller et al. (18). For quantitive and qualitative appraisal of extracted DNA, NanoDrop I (Thermo Scientific Fisher, USA) and 1% agarose gel electrophoresis were used, respectively.

The genotype frequencies of the two SNPs are shown in Table 1. The current findings did not reveal statistically significant differences between case and control groups (P = 0.364). In order to assess whether an association was present between gene polymorphism and the risk of sporadic BC in codominant, dominant, and recessive genetic models, the genotype frequencies of each group was consolidated in new heredity models, then, odds ratios and 95% CI were calculated. The AG/AA+GG genotypes did not demonstrate a risk of sporadic BC (P = 0.254; OR:1.385; CI:0.791 - 2.425; Table 1).

In addition, AA/AG+GG and GG/AA+AG genotype models of the XRCC1 gene did not show a significantly increased risk of sporadic BC (P > 0.05; Table 1).

In the current investigation, a statistically significant difference was not shown in genotype frequencies of the ERCC1 gene between sporadic BC patients compared to controls (P = 0.666). Similar to the XRCC1 gene polymorphism analysis, the genotype frequencies of the ERCC1 gene were assessed for three heredity models. The AG/AA+GG genotypes did not increase the risk of sporadic BC (P = 0.886; OR: 1.042; CI: 0.595 - 1.825; Table 1). 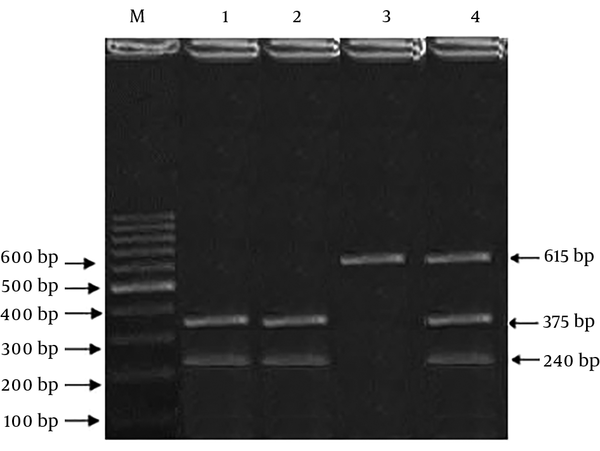 The current investigation studied the association of two SNPs in the XRCC1 and ERCC1 genes with the risk of sporadic BC in females of northwestern Iran.

The findings revealed that the XRCC1 (rs25487) and ERCC1 (rs3212964) gene polymorphisms were not associated with an enhanced chance of sporadic BC. The present investigation is the beginning of a case-control survey to evaluate the association between two nucleotide changes in the BER pathway related-genes and the risk of sporadic BC in Iranian females.

Similar to the current findings, previous investigations did not show an association between the ERCC1 (rs3212964) gene polymorphism and the risk of BC (15, 28). Furthermore, ASE-1 has been found in an antisense orientation and overlaps with the ERCC1 gene and is likely involved with RNA polymerase I transcription complex. Aiub et al. showed the BER mechanism was implicated in DNA damages repair, as a result of compounds such as N-nitrosodiethylamine (29). However, preliminary studies did not reveal a significant association between nucleotide change in the ERCC1 gene and the risk BC.

The contradictory results may be due to the low demographic power, inadequate sample size, different allele frequencies, differences in the genetic background of the population (ethnic and racial). In addition, another possibility may be social behavior and environmental factors affecting the risk of BC. However, more investigations are needed to evaluate the role of genetic variations of BER mechanism genes in the pathogenesis of BC. The current results provided evidence that XRCC1 (rs25487) and ERCC1 (rs3212964) gene polymorphisms may implement both independent and interactive impacts on the progress of breast cancer. While BC is considered as a heterogeneous disease, large-designed geographic investigations endeavoring to consider gene-gene and gene-environment interactions are needed for the future studies.

The authors appreciate the Ahar Branch of Islamic Azad University for their financial support of this research (Grant number: 2209508220009).

Copyright © 2018, Gene, Cell and Tissue. This is an open-access article distributed under the terms of the Creative Commons Attribution-NonCommercial 4.0 International License (http://creativecommons.org/licenses/by-nc/4.0/) which permits copy and redistribute the material just in noncommercial usages, provided the original work is properly cited
download pdf 392.36 KB Abstract XML Get Permission (article level) Import into EndNote Import into BibTex
Number of Comments: 0