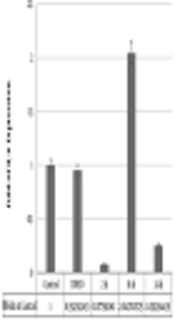 Cytokines are an important factor in immune regulation. IL-6 is a cytokine with various biological activity. Splice variants of IL6, by interaction with dissimilar receptors (IL6-R and gp130), activate distinct signal transduction for regulating multiple biological processes. Shirazi thyme (Zataria multiflora), in traditional medicine, is used as an anti-inflammatory agent.

In this study, the effect of Shirazi thyme hydro alcoholic extract, on the expression level of two different IL6 variants in human mesenchymal stem cells (MSCs), were studied.

MSCs where cultured and treated in seven groups by two doses of 50 µgmL-1 and 100 µgmL-1 in three different times 2 hours, 16 hours, and 24 hours. RNA was extracted from harvested cells and cDNA was synthesized. IL6 mRNA level was evaluated by real-time qRT-PCR. 2-∆∆Ct was used for IL6 gene expression fold changes and statistically analyzed by t-test.

Treatment with Shirazi thyme extract significantly reduced IL6 mRNA variant1 at all doses, and all the time, excepted in 50 µgmL-1 treatment after 16 hours, however, IL6 mRNA variant2 had increased level in all studied doses and times.

Blocking IL6 signals or reducing its expression could be a theraptic approach for some inflammatory, malignant, or autoimmune diseases. Increased IL6 mRNA variant 2, also by increasing the sensitivity of cells to insulin and increasing the absorption of glucose and lipid metabolism, might be prevented adipose tissue expansion.

Interleukin-6 is a soluble multifunctional pro-inflammatory cytokine with pleiotropic activity (1, 2). In different tissues it can regulate a wide range of biological activities (1, 3-5).

IL6 acts in inflammation and the maturation of B cells. This protein has been shown to be an endogenous pyrogen that induces fever in people with infections or autoimmune diseases (6). In sites of inflammation, IL6 was produced and secreted into the serum and induces a transcriptional inflammatory response through interleukin-6 receptor alpha (7). IL6 was implicated in some inflammation association disease such as obesity, diabetes, and arthritis rheumatoid (7). There are multiple splice variants reported for IL6, for which there is evidence from EST and cDNA clones (8). IL6 have six protein coding transcript variants NM-000600.3 IL6-201, IL6-202, IL6-004, IL6-005, IL6-006, and IL6-203 encoding proteins of sizes 212 aa, 252 aa, 136 aa, 189 aa, 198 aa, and 122 aa, respectively. These alternate transcripts were characterized as follows: IL-6 (715 bp); IL6∆2 (568 bp, missing exon 2); IL6∆4 (523 bp, missing exon 4); IL6∆2, 4 (376 bp, missing both exon 2 and exon 4) (9-11). IL-6, as a cytokine, in its specific tissue could regulate immunity, inflammation, and hematopoiesis with direct effects on cell proliferation, apoptosis, and differentiation (8). It is recognized that naturally occurring splice variants of cytokines can perform various biological functions in different cells and positions (8). Two variants of human interleukin-6 are important in controlling it’s biological activity. Isoform 1 has 212 amino acids including 28 amino acids signal peptide and represents the longer transcript and encodes the longer isoform (12). Isoform 2 has 148 amino acids and lacks an exon 2. The chromosomal position of the IL6 gene was mapped on 7p21 (13). There are four helix bundles in an up-up-down-down topology and three loops in IL6 structure (12). Macrophages and monocytes, after stimulation by toll-like receptor (TLRs) produced IL-6 (14). IL-6 has different names based on its biological activity, like BSF-2, HSF, HGF, and Interferon-β (15).

The IL-6 transported to the liver rapidly induces a vast spectrum of acute phase protein such as c-reactive protein (CRP), serum amyloid A (SAA), fibrinogen, and haptoglobin, however, it also decreases, fibronectin, albumin, and transferrin output (12).

IL-6 could be leading to platelets release by promoting megakaryocyte maturation (14), regulate serum iron and zinc levels (2), and copper translation (13). In bone marrow, IL-6 could leading to bone resorption and osteoporosis (2). IL-6 induces keratinocytes and increases VEGF production and angiogenesis in cancers (14, 16). This cytokine is able to induce differentiation of activated B-cells into Ab-producing plasma cell (16). Over expression of IL-6 has been involved in the pathology of autoimmune inflammatory disease (17). Cytokine inhibition could be a safe and possible strategy for treatment of some inflammatory diseases. IL6 inhibitors like Siltuximab (an anti-IL6 mAb) binds to IL-6, inhibiting binding to soluble and membrane bound IL-6 receptors (IL-6R). Siltuximab has been prescribed for the treatment of various cancers and malignancies (18); Tocilizumab (an anti-IL6R mAb), as an immunosuppressive drug, has been investigated for the treatment of rheumatoid arthritis (RA) and a severe form of arthritis in children (2). Tocilizumab is a recombinant humanized anti-IL-6R receptor antibody and it blocks IL-6-mediated signal transduction by inhibiting IL-6 binding to trans membrane and soluble IL-6R (16).

Zataria multiflora Boiss. (ZM) is a thyme-like plant belonging to the Lamiaceae family, which is native to southwestern Asia (Iran, Pakistan, and Afghanistan). This plant is a valuable medicinal and condimental plant is named Avishan-e-Shirazi (Shirazi thyme) in Iran. It has several traditional uses as an antiseptic, carminative, stimulant, diaphoretic, diuretic, anesthetic, anti-spasmodic, and analgesic (30, 31). Z. multiflora (Shirazi thyme) was able to inhibit mediators of inflammatory reaction (32) and may have potential anti-cancer effects (33). Shirazi thyme extract containing 39.67% thymol, 36.21% carvacrol, 10.62% Paracemenu, 1.77% carvacrol, methyl ester 1.76%, linalool, and 0.48% beta Kariovfilin (30). In this study, the Zataria multiflora Boiss. hydro alcoholic extract, on the expression of IL-6 gene in human bone marrow-derived mesenchyme stem cells, has been studied.

The human mesenchymal stem cells from the Royan Institute in passage 2 were grown in Dulbecco’s modified Eagle’s medium (DMEM. Gibco BRL; Grand Island, NY, United States) supplemented with 15% fetal bovine serum (Gibco BRL) and 2% antibiotic ((pen/str) Inoclon company, Iran). They were incubated at 37°C in a 5% CO2 atmosphere. After 48 hours the no adherent cells were removed and the adherent layer was cultured until it reached 50% - 70% confluence. After passage 6, cells were treated with 50 μgmL-1 and 100 μgmL-1 thyme extract in three different times 2 hours, 16 hours, and 24 hours. Cells were harvested by incubation with 0.25% trypsin-EDTA (Gibco BRL) and used for RNA extraction.

Expressions of mRNAs for the pro-inflammatory cytokine IL-6 were quantified by quantitative real-time RT-PCR.

Total cellular RNA was isolated from approximately 107 mesenchymal stem cells by using the RNX extraction kit (RNX, Cina Gene Company, Iran). According to the manufacturer’s instructions, 1 mL of RNX™ -PLUS was added to 2 mL of sample vortexing for 5 - 10 seconds and incubated at room temperature for five minutes. A total of 0.2 mL of chloroform was added to the tubes and mixed well for 15 seconds by shaking, then, the sample was incubated on ice or 4°C for 15 minutes. The samples were centrifuged at 12000 rpm for 15 minutes at 4°C, the aqueous phase was transferred to a new tube, an equal volume of isopropanol was added, and then gently mixed and incubated on ice for 15 minutes. Then, the mixture was centrifuged at 12000 rpm at 4°C for 15 minutes. Next, the supernatant was discarded and 1 mL of 75% Ethanol was added, shortly vortexed to dislodge the pellet, and then centrifuged at 7500 rpm for eight minutes at 4°C. The supernatant was discarded and the pellet was let to dry at room temperature, then the pellet was dissolved in 50 µL of DEPC treated water.

All data are expressed as means ± SEM. and mRNA data were log transformed prior to the analysis. Differences between specific time points were determined by a Student-Newman-Keuls test. Student’s t-test was used to determine any difference between control and treated groups. Differences were considered significant at P < 0.05. IL6Δ2 mRNA variant expression level increased in all the times and doses as 50 μgmL-1. There were no changes in β-act expression level related to extract treatments as a reference gene and DMSO threated cells expression pattern like control cells. IL-6 is expressed in different cell types and could influence a wide range of cell types. Due to the diversity and uniqueness of its receptors, IL6 regulates various biological processes. The IL6 uses two dedicated receptors, IL-6R (IL-6 receptor) and gp130 to guide its biological activities. When IL-6 binds to mIL-6R (membrane-bound form of IL-6R), homodimerization of gp130 is induced and a high-affinity functional receptor complex of IL-6, IL-6R, and gp130 is formed. Interestingly, sIL-6R (soluble form of IL-6R) also binds with IL-6, and the IL-6 -sIL-6R complex can then form a complex with gp130 (10). IL-6 long variant has 28 amino acid signal peptides and is secreted from cells; then, it acts as an mIL-6R and induces inflammatory responses in inflammatory diseases like arthritis. Inhibition of IL-6 receptor is one of the medical tools for arthritis treatment (34).

As our results, two transcript variants of IL6 were expressed in MSCs and thyme extract influenced expression levels variously.

The IL6 can communicate with gp130 monomers through two different positions: Site A refers to the site of interaction on IL-6 with the gp130 monomer from the same heterotrimer; site B refers to the site that interacts with gp130 from the twofold-symmetric heterotrimer. Changing the composition of exons and loss of them can affect structure and interactions of IL6 with its receptors, therefore, the various variants of IL-6 can act differently in the transmission of messages and IL-6 signal transduction (6). IL6 bines to R, A, and B sites and transmitted signals to inflammation responses. IL6∆2 binds to B and sometimes R sites, however, it didn’t bind to the A site and could have anti-inflammatory effects (7).

Production of IL-6 was stimulated in inflammation, tissue damage, and infection and stimulates the synthesis and induces the expression of a wide range of acute phase proteins in the liver. Based on therapies to reduce or inhibit IL-6, the use of Tocilizumab or Siltuximab can reduce inflammation and improve or reduce the symptoms of the disease (14).

Inhibition of IL-6 function requires either direct antagonism at the level of the IL-6 transcript or protein to yield the total loss of cytokine function or the targeted blockade of the specific IL-6 signaling pathways that are involved in mediating cytokine-induced disease (35).

Zatara multiflora is a valuable plant used in traditional medicine. In this study, we examined the effects of thyme extract different concentrations on mesenchymal stem cells to determine the minimum effective concentration. Mesenchymal stem cells, multipotent, non-blood, self-renewable, adult, heterogeneous, like fibroblasts and undifferentiated, can be reproduced for a long time. IL-6 is an expression by mesenchymal stem cells. We used mesenchymal stem cells due to the fact that these cells have a differentiating capacity into various cell lines that are used in cell therapy. Reduced IL6 variant 1 mRNA expression level may be effective in reducing inflammation and symptoms of autoimmune diseases. Increased expression level of IL6 variant 2 mRNA, also by increasing the sensitivity of cells to insulin and increased the absorption of glucose and lipid metabolism, can prevent obesity and adipose tissue expansion (36). Due to the fact that obesity and increased fat mass may be underlying inflammatory disorders, obesity prevention can be effective in the treatment of chronic inflammatory diseases. Therefore, thyme, as an anti-inflammatory and antipyretic herb, is probably affected by influencing IL6 expression. In the future, the effect of the thyme extract on the reduction of inflammation by screening inflammatory cytokines such as IL6 in inflammatory diseases, like rheumatoid arthritis and nervous inflammation such as MS, will be investigated.

Shirazi thyme has several traditional uses, it is a popular herbal tea and can be used as a spice and flavor. We decided to find an effective and low dose of total Shirazi thyme extract effects as a prophylactic agent. Due to IL-6 importance in notable diseases of this century like autoimmune, cancer, and depression we analyzed transcript level of IL-6 long and short variants and find that thyme extract in 100 µgmL-1 doses reduced IL-6 long variant expression and could be effective in prevention of diseases like arthritis and cancer. Thyme extract increase IL-6 short variant expression level and might be effective for obesity and diabetes prevention.

Copyright © 2018, Gene, Cell and Tissue. This is an open-access article distributed under the terms of the Creative Commons Attribution-NonCommercial 4.0 International License (http://creativecommons.org/licenses/by-nc/4.0/) which permits copy and redistribute the material just in noncommercial usages, provided the original work is properly cited.
download pdf 178.18 KB Abstract XML Get Permission (article level) Import into EndNote Import into BibTex
Number of Comments: 0