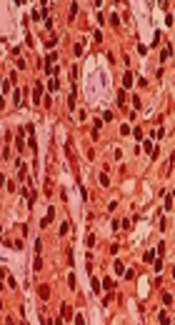 Breast cancer (BC) is one of the most common cancers among women and is the main cause of cancer-related mortalities in the female population. The main cause of BC is not fully understood yet; however, many genes have been identified as risk factors that increase susceptibility to this disease.

The aim of this study was to evaluate the expression of ABCC12 gene in patients with ductal breast carcinoma and its relationship with other biomarkers including estrogen receptor (ER), progesterone receptor (RP) and human epidermal growth factor receptor 2 (HER-2).

This study included nine women diagnosed with ductal breast carcinoma as cases and five healthy women as controls. RNA extraction from breast tissue and cDNA synthesis were performed, and the expression of ABCC12 gene was evaluated using the real time polymerase chain reaction (PCR) method. After preparing formalin-fixed paraffin-embedded breast tissues, immunohistochemical evaluation of these samples and chromogenic in situ hybridization (CISH) of ER, PR and HER-2 were performed.

Our study showed that the evaluation of the ABCC12 gene expression as a one of multi-drug resistance protein members can be used as a prognostic factor to identify the stages of BC and its therapeutic approaches.

Breast cancer (BC) is one of the most common cancers and is the main cause of mortality from cancer among women worldwide (1). BC constitutes about 33% of malignancies among women (2). This malignancy is a multifactorial disease in which several genetic and environmental factors are involved. The role of genetic and heritable factors in BC has been proven. For example, BC risk in women with a mother or sister suffering from BC is four times higher than in other women. So far, the effects of various genes on BC, which can be referred to as oncogenes, have been studied (3). The product of oncogenes controls cellular growth through various mechanisms and is involved in cell transformation or induction of cancer (4).

Today, BC prognosis and diagnosis are performed through various variables such as histology, tumor size, lymph node, estrogen receptor (ER), progesterone receptor and overexpression of HER-2 (5, 6). Estrogen and progesterone play an important role in the growth and normal functioning of breast glands. Disrupting the function of these hormones also causes the development of BC. These hormones act through connecting to their receptors, which are known as ER and PR. These receptors function as signaling triggers and ligand-activated transcription factors (7).

BC is classified as ER+/PR+ when ER and PR proteins are overexpressed. ER+/PR+ tumors are very different in comparison to ER+/PR- in responding to hormone therapy (8). About 55% - 60% and 8% of women with ER+ and ER-BC respond to hormone therapy, respectively. Also, BC tumors with better differentiation are mostly ER+/PR+ and have better prognosis (9).

The human epidermal growth factor receptor 2 (HER-2) is one of the most important biomarkers and is currently used for the diagnosis and differentiation of different types of BCs. The overexpression of HER-2 is observed in approximately 15% of BCs (10). Studies showed that the overexpression of HER-2 is associated with resistance to treatment with endocrine agents in BC patients (11). In BC patients with HER-2 overexpression (HER-2+), chemotherapy and treatment with trastuzumab improve survival (12). The multi-drug resistance associated with protein 9 (MRP9) is a member of the superfamily of ATP-binding cassette (ABC) transporters and is encoded by ABCC12 gene in humans. Studies showed that MRP9 gene in mice is expressed in various tissues such as the ovaries, brain, breasts, prostate and testes (13, 14). In a study by Bera et al. it was shown that ABCC12 gene is an unusual truncated member of the ABC transporter superfamily and is highly expressed in BC (15). So far, there is no other study on the physiological role and involvement of ABCC12 gene in BC or other cancers.

Therefore, the aim of this study was to investigate the expression of ABCC12 gene in patients with ductal breast carcinoma and its association with other biomarkers such as ER, PR and HER-2.

In this study 14 women were recruited from hospitals of Zanjan city, Iran, during October to December 2017. Nine women with breast invasive ductal carcinoma (age range: 29 - 61 years) and the mean age of 45 years, who had not received any treatments such as chemotherapy or radiotherapy, were evaluated. BC was diagnosed in the subjects by clinical examination and gross pathology. Also, five healthy women (age matched) were selected as healthy controls. These subjects had presented for routine physical examination. BC tissue from patients and normal breast tissue from healthy controls (0.01 - 0.005 g) were taken by a surgeon using the core needle biopsy (CNB) method. A portion of the obtained samples was blocked by paraffin and another portion was kept in a nitrogen tank. All the studied women signed a consent form in accordance with the ethical standards of the institutional and/or national research committee and the 1964 Helsinki Declaration and its later amendments or comparable ethical standards. The sample collection procedure was approved by the Ethics Committee of Islamic Azad University, Zanjan Branch (IR.IAU.Z.REC.1396,72).

3.3. HER-2 Gene Amplification by Chromogenic In Situ Hybridization (CISH)

RNA extraction was performed using the RNX kit (Sinagene, Iran) according to the manufacturer’s instructions. The concentration of the extracted RNA was determined using a spectrophotometer. cDNA was synthesized using cDNA synthesis kit (TaKaRa, Japan) according to the manufacturer’s instructions. The expression rates of ABCC12 and GAPDH (housekeeping genes) were evaluated using specifically-designed primers (Table 1). Real Time polymerase chain reaction (PCR) reaction was performed using SYBR Green (Ampliqon, Denmark) in triplicate. PCR was performed using rotor-gene Q PCR system at 95°C for 15 minutes and 40 cycles at 95°C for 15 seconds, 60°C for 30 seconds and 72°C for 30 seconds. Also, electrophoresis was performed on agarose gel to ensure the correct PCR reaction. The comparison of ABCC12 expression between the cases and controls was performed using Rest software. t-test was used for the assessment of difference between the groups. P value less than 0.05 was considered statistically significant. Also, the obtained threshold cycles (TCs) from the cases and controls were compared using the 2-ΔΔCt and the Pfaffl method.

Table 1. The Characteristics and Sequences of the Used Primers

The results of ER and PR antigen assessment were considered as - and + (Figure 1). The obtained results from immunohistochemistry (IHC) analysis are presented in Table 2. Also, the HER-2 antigen was considered as 0 to 3+ based on the intensity of cancer cells nucleus staining (Figure 2). According to chromogenic in situ hybridization (CISH) analysis, two patients showed positive amplification for HER-2 antigen (Table 2 and Figure 3). An example of a positive (A, ER and C, PR) and negative (B, ER and D, PR) result from the assessment of estrogen receptor using immunohistochemistry BCs are heterogeneous at morphologic, immunohistochemical and molecular levels. This heterogeneity persists even within apparently homogeneous groups of ER+ and ER- tumors. In the past few years, ER+ tumors have been subjected to multigene prognostic/predictive assays to identify more aggressive types of ER+ tumors that are expected to benefit from additional chemotherapy and define the risk of recurrence in an individual patient (16, 17).

The evaluation of ER, PR and HER-2 genes is very important to determine BC subtype and guide the therapeutic strategy of patients with BC (18). ABC proteins are known as the carriers of lipids, carbohydrates, amino acids, steroids and chemical compounds such as chemotherapy drugs and products derived from metabolism (19). Considering that the failure of chemotherapy is associated with increased expression of ABC proteins (20), it is possible to use better treatment methods and drugs in treating patients with BC by examining these proteins. Therefore, in this study we evaluated the association of ABCC12 gene expression with ER, PR and HER-2 biomarkers in patients with breast ductal carcinoma.

Madrid and Lo demonstrated that HER-2 was amplified in all +3 patients and 45% of +2 patients. Also, in patients under 50 years of age, the amplification rate of HER-2 gene was higher than in patients over 50 years of age (24). However, our study showed no significant association between HER-2 gene amplification and age of patients. In a study, Anders et al. evaluated the expression of PR, ER and HER-2 genes in patients with BC (under 45 years old and over 65 years old). Their results showed a significant increase in tumor size, tumor grade, lymph node metastasis and HER-2 expression in subjects under 45 years of age, whereas ER expression was decreased significantly in this group (25). However, our study showed that the expression of ER increased significantly in patients under 45 years of age, but the expression of HER-2 remained unchanged and no significant association was found between age of patients and expression of this gene. The difference in sample size could explain the difference in results. Brase et al. and Paik et al. also showed continuous expression of HER-2 RNA according to IHC/FISH categories. It is notable that although a major overlap exists between the groups, the HER-2 IHC 1+ category shows significantly higher RNA levels than the IHC 0 category, suggesting that some biologic meaning is associated with the separation of these IHC staining groups, rather than being merely a staining artifact (26, 27).

In another study, Collins et al. showed that luminal B subtype frequency (35%) was higher than other subtypes in BC patients under 40 years of age and ER and PR expression significantly increased in these patients (28). Also, our study showed that the frequency of luminal B subtype was higher than others in patients under 45 years old and expression of ER was significantly increased.

Considering that the expression of ABCC12 gene was significantly increased in patients with breast ductal carcinoma, it can be stated that this increase disrupts patient treatment and the performance of used drugs. The expression of ABCC12 gene can be a useful prognostic factor to identify the stages of BC and its therapeutic approaches. Evaluation of ABCC12 gene expression character in BC patients with other diagnostic profiles was performed for the first time in this study in Iranian women. Although this study added to our understanding of BC, sample size in our study was not large enough; thus, further studies using a larger cohort of patients are recommended.

Copyright © 2019, Gene, Cell and Tissue. This is an open-access article distributed under the terms of the Creative Commons Attribution-NonCommercial 4.0 International License (http://creativecommons.org/licenses/by-nc/4.0/) which permits copy and redistribute the material just in noncommercial usages, provided the original work is properly cited.
download pdf 6.73 MB Abstract XML Get Permission (article level) Import into EndNote Import into BibTex
Number of Comments: 0