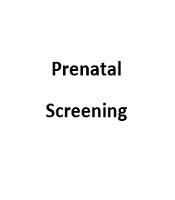 The Clinical Indications and Cytogenetic Analysis of Genetic Amniocentesis Cases

The detection rate of down syndrome for the first-trimester screening at earlier stages of pregnancy is higher than the second-trimester screening (approximately 87% versus 81%) (3). The screening tests that involve two markers, specifically PAPP-A, free β-hCG, in combination with maternal age have a considerably better performance than those involving single markers with and without maternal age, and they can detect 70% of down syndrome affected pregnancies (4). However, underutilization of the first-trimester screening shows that the advantage of earlier diagnosis associated with FTS has been overlooked by clinicians providing genetic counseling.

The risk of fetal loss and other complications associated with amniocentesis is very low, and the risks of invasive procedures have also decreased over time (5). However, not all women with abnormal screening test results agree to undertake such an invasive procedure. Offering pregnant women the relatively new noninvasive prenatal screening (NIPS) tests that use cell-free fetal DNA sequences isolated from a maternal blood sample may provide reassurance to women who have concerns about undertaking an amniocentesis (6).

GA is recommended for pregnant women with abnormal screening tests. FTS has acceptable performance for detection of pregnancies with chromosomal abnormalities; however, this method has been hardly recommended by clinicians. Some pregnant women who are GA candidates refuse invasive prenatal diagnosis. Moreover, a large fraction of pregnant women have a delayed diagnosis or recommendations for therapeutic abortion. Training of the clinicians on the principles of genetic counseling and increasing public awareness regarding prenatal genetic screening tests and providing pre- and post-test genetic counseling is of great importance.

Copyright © 2019, Gene, Cell and Tissue. This is an open-access article distributed under the terms of the Creative Commons Attribution-NonCommercial 4.0 International License (http://creativecommons.org/licenses/by-nc/4.0/) which permits copy and redistribute the material just in noncommercial usages, provided the original work is properly cited.
download pdf 78.17 KB Get Permission (article level) Import into EndNote Import into BibTex
Number of Comments: 0