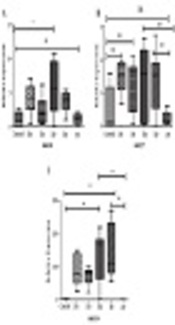 Evaluation of microRNA (411, 377, and 154) Expression in the Plasma and Placenta of Women with Preeclampsia

MicroRNAs (miRNA) are considered to be the regulators of the gene expression. They play an essential role in cell proliferation, apoptosis, and development. Change in their expression is associated with various pathologic disorders. Moreover, preeclampsia (PE) is a complex pregnancy-related disorder.

The purpose of this study was to determine the rate of three miRNA expressions in the placenta and plasma of healthy individuals and pregnant women with preeclamptic.

Plasma and placenta samples were collected from 10 women with preeclampsia during the first trimester and third trimester of the pregnancy, and 10 healthy pregnant women who referred to Medical Genetics Center, Shiraz, Iran. The miRNA expression was investigated in the samples by real-time reverse-transcription-polymerase chain reaction analysis.

Considering many factors affecting the amount and type of the expression of miRNAs, and based on the results of the present study, it seems miR-411, miR-377, and miR-154 are possibly appropriate candidates as novel biomarkers; however, further investigation is needed to confirm their suitability in the future studies.

Preeclampsia (PE) is a complex pregnancy-related disorder. It involves approximately 5% - 8% of pregnant women (1, 2). It is one of the main causes of maternal and neonatal mortality worldwide (3). Also, it increases the risk of cardiovascular and diabetes disorders in the mother and baby (1). Preeclampsia often has no clear manifestation in the early stages, but some of the symptoms, including edema and weight gain, may be similar to the common side effects of the pregnancy. This disorder occurs after the 20th week of the pregnancy. It is characterized by new-onset hypertension with a systolic blood pressure ≥ 140 mmHg or diastolic blood pressure ≤ 90 mmHg and proteinuria (≥ 1+) (1, 2). The delay in childbearing in the developed countries adds to the risk factors associated with preeclampsia such as older age, obesity, and cardiovascular disease (3). It seems that the mechanism of preeclampsia is a combination of genetic factors, epigenetics and environmental factors that contribute to its pathogenesis and pathophysiology, and its only treatment is delivery of the placenta and embryo (1, 4). Clinical symptoms of the disease can be greatly attributed to placental defects, in particular, dysregulation of trophoblast cells. Recent studies have shown that the dysregulation of micro-RNAs (miRNA) in the placental tissue plays a significant role in the pathogenesis of preeclampsia. MicroRNAs are a group of noncoding RNAs (20 to 22 nucleotides) and protected molecules of intracellular regulatory RNAs that crucially participate in post-transcriptional gene regulation. These small molecules are involved in a wide range of cellular events. Identification of the preeclamptic placenta impaired genes may be a useful way to discover biomarkers and diagnose this disorder (5, 6).

Interestingly, human placenta is a rich organ of the expression of miRNA, and a large number of different miRNAs have been found in preeclamptic placenta (5). Alteration of the profile of miRNA in different stages of the pregnancy, including the postpartum period, suggests that miRNAs can be used as an indicator to show physiological status. In addition, they can also be used as candidates for a prenatal diagnostic agent. Although the pathophysiology of preeclampsia is still unclear, miRNAs play an important role in post-transcriptional gene regulation. Several miRNAs that are expressed predominantly or exclusively during pregnancy are clustered in chromosome regions, may be controlled by identical promoters or regulatory and similar targets, have synergistic effects. Three important clusters are the C19MC (chromosome 19 miRNA cluster) and the miR-371-3 cluster on chromosomes 19 and C14MC, which are located on chromosome 14. The C14MC is expressed more often in the placenta and embryonic development, and its expression in adults is limited to the brain, the expression of C19MC has been observed in the reproductive system and placenta tissue, and the miR-371-3 cluster is often expressed in the placenta. The C14MC included 52 microRNA genes (7).

In this regard, miR-411, miR-377, and miR-154 are located on the human 14q32.31 imprinted domain in preeclamptic placentas (8). The expression and function of micro-RNA 411 (mir-411) have been studied in several types of cancers; the results showed that mir-411 expression was significantly reduced in breast cancer (9). Other studies have shown that oxidative stress (a condition that is thought to weaken the formation of the placenta in preeclamptic pregnancies) has been shown to alter the expression of several miRNAs, including miR-210 and miR377 (10).

Discovering micro-RNAs in the maternal circulation not only facilitates understanding their role in natural pregnancies but also explores new ways to detect biomarkers to identify pregnancy-associated complications such as preeclampsia, ectopic pregnancy, gestational diabetes, fetal growth restriction, loss of the pregnancy, and preterm delivery. It is essential to find the right biomarker in the blood in the early diagnosis of pre-eclampsia and, on the other hand, to use non-invasive methods without side effects for pregnant women. As described earlier, miR-411, miR-377, and miR-154 are located in a chromosomal area and have been linked to pregnancy and some of the pregnancy-related disorders in previous studies.

Samples were collected (2015 - 2017) following the permission of the Organizing Committee for Ethical, Legal and Social Issues of Shiraz School of Medical Sciences (IR.SUMS.REC.1397.1259). Written informed consent was obtained from all women in the study for the use of their blood samples and tissues. Selection of probable candidates for preeclampsia in the 12th week (first trimester) was performed according to Doppler sonography for pregnant women referred to the Center of Medical Genetics, Shiraz, Iran. The health status of 70 pregnant women was evaluated until the end of pregnancy, 10 cases of women under study in the third trimester showed symptoms of preeclampsia (hypertension with a systolic blood pressure ≥ 140 mmHg or diastolic blood pressure ≤ 90 mmHg and proteinuria (≥ 1+)). Six subjects were excluded from the study in the third trimester due to immigration or lack of contribution to referral and blood donation, there was a case of abortion in the 26th week and two preterm labor cases. Eventually, 10 of the remaining cases in the study were selected as normal pregnant women.

Serial blood samples (7cc) were collected from pregnant women in tubes containing EDTA in the 12th week (the first trimester) and 34 - 38th week (the third trimester). The characteristics of the study population have been mentioned in Table 1. The placentas were collected from normal women and women with PE at the end of pregnancy and immediately placed in RNA later.

Blood samples were centrifuged in primary blood collection tubes for 10 minutes at 1900 × g (3000 ppm) and 4˚C using a swinging bucket rotor, then plasma phase was transferred to a new conical tube. To obtain the cell-free plasma, samples were centrifuged for 10 minutes at 16000 × g and 4˚C in a fixed-angle rotor; the supernatant was transferred to a new tube and all samples were stored at -80˚C. Extraction of microRNA was carried out from 200 µL plasma using the miRNeasy Serum/Plasma Kit (Qiagen, Germany, cat. No. 217184) and from 25 mg placenta (3 mm A cube, volume 27 mm3) with a miRNeasy Mini Kit (Qiagen, Germany, Cat No: 217004) according to the manufacturer’s instructions. The total RNA from each sample was reverse transcribed into complementary DNA (cDNA) with gene-specific RT primers manually. Primary reaction mixture of RT contained 3 µL RNA, 1.5 µL gene-specific RT primer (Table 2) and 14 µL deionized water to a total volume of 20 µL was heated at 70˚C for 10 minutes, then a secondary reaction mixture of RT contained 3µL RT buffer, 3µL deoxyribonucleoside triphosphates (dNTPs), 1 µL M-MLV reverse transcriptase, and 3 µL DEPC-treated water was added to the first mix. The RT reactions were performed for 15 minutes at 25˚C, 15 minutes at 37˚C, 60 minutes at 42˚C, 10 minutes at 72˚C, and then held at 4˚C.

Real-time PCR was performed by SYBR Premix Ex Taq (Takara, Japan) kit protocol. The 11 µL PCR consisted of 5.5 µL SYBR, 1 µL PCR forward primer, 1 µL PCR reverse primer, 2 µL cDNA template, and 1.5 µL D.W., all reactions were incubated at 95˚C for 10 minutes, followed by 45 cycles of 95˚C for 15 seconds, 60˚C for 15 seconds, and 72˚C for 30 seconds. All reactions were performed in duplicate with the use of the StepOnePlus Real-Time PCR System.

Expression levels of plasma and placenta miRNAs was analyzed by the comparative CT method (2ΔΔCT method). The U6 snRNA was used as an internal control. Statistical analysis was performed by one-way ANOVA (Kruskal-Wallis test) with prism graph pad software V. 6.1. Preeclampsia is one of the main causes of maternal and neonatal mortality worldwide, which often has no clear manifestation in the early stages (3). Clinical symptoms of the disease can be significantly attributed to placental defects, in particular, dysregulation of trophoblast cells. Recent studies have shown that dysregulation of micro-RNAs (miRNA) in the placental tissue plays a significant role in the pathogenesis of preeclampsia. Circulating miRNAs, due to the presence and stability in blood circulation, have emerged for many diseases as a potential new biomarker (7). Many studies have been performed on placental miRNAs in PE that indicate the involvement of miRNAs in the pathophysiology of PE. In this study, the expression of three miRNAs (miR-411, miR-377, and miR-154, located on the human 14q32.31 imprinted domain) was investigated to achieve a biomarker in normal placenta and PE in pregnant women. Based on the results obtained from this study, the expression of miR- 411 and miR-377 was low in normal and PE placenta, whereas miR-154 had a high expression in the placenta of normal pregnant women and women with PE, but the expression declined in plasma samples of both normal and preeclamptic pregnant women. There was a significant difference in the expression of miR-154 between all placentas (normal and PE) and plasma samples in the first and third trimesters in PE pregnant women.

Studies have shown that the expression of miRNAs in the placenta varies in different stages of the pregnancy, and it is regulated by environmental factors such as oxygen pressure (8). Oxidative stress seems to play a role in creating poor placentation in preeclamptic pregnancies, and it is effective on the expression of several miRNAs, including miR-377 and miR-210 (10). Accordingly, changes in environmental conditions may play a major role in creating this variation. In the study conducted by Zhu et al. (11), miR-411 and miR-377 showed a decreased expression in the patients with PE. In the present study, the level of the expression of miR-411 was low in both healthy and PE placentas, but the expression level of miR-411 showed a significant difference between the normal placenta and plasma samples in the first trimester in pregnant women with preeclampsia. In the review article of Gunel et al., various studies reported different levels of miRNA expression. For example, some studies reported over-expression of miR-154 in the placenta, and other studies reported under-expression or miR-210 also showed different expressions in serum and plasma samples (5). The miR-584 in the study of Zhu et al. showed a decreased expression, and in the study of Enquobahrie et al., there was a reduced expression (12).

Because miRNAs potentially target many genes, and a gene is often affected by multiple miRNAs, and due to the overlap of some studies as previously mentioned, to use micro-RNAs as predictable biomarkers, it is necessary to determine the exact role of PE-related miRNAs. Large‐scale population expression profiling studies are necessary to find useful and pure biomarkers to improve the targeted diagnosis and treatment of PE (4). Considering many factors affecting the amount and type of the expression of miRNAs, and based on the results of the present study, it seems miR-411, miR-377, and miR-154 are possibly appropriate candidates as novel biomarkers; however, further investigation is needed to confirm their suitability in the future studies.

Copyright © 2019, Gene, Cell and Tissue. This is an open-access article distributed under the terms of the Creative Commons Attribution-NonCommercial 4.0 International License (http://creativecommons.org/licenses/by-nc/4.0/) which permits copy and redistribute the material just in noncommercial usages, provided the original work is properly cited.
download pdf 154.79 KB Peer Review Comments ( 136.07 KB) Get Permission (article level) Import into EndNote Import into BibTex
Number of Comments: 0