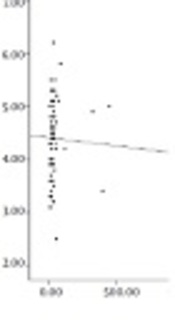 Our aim was to assess hepatic enzymes levels in children with AGE and severe dehydration (> 10%).

We enrolled 138 children with AGE admitted to the Amir-Al-Momenin Hospital of Zabol city in 2016. Children with severe dehydration (> 10%), according to the Vesikari score, were included. Complete blood count, selected inflammatory markers, and hepatic enzymes were investigated.

The frequency of acute gastroenteritis (AGE) in children has dramatically increased in recent years; AGE in children can be associated with severe diarrhea and dehydration leading to a dire critical condition (1). AGE is defined as ≥ 3 episodes of loose defecation within 24 hours (2). A wide range of organisms such as viruses, bacteria, and parasites can lead to AGE (3, 4). Collectively, viral etiologies of AGE account for nearly 70% - 75% of all AGE cases in children (1, 5). As high as 12% - 18% of mortalities in childhood are related to AGE (6, 7). This rate has been even higher reaching to 25% in regions with poor sanitation and health care system (8). The usual clinical picture of AGE includes a spectrum of one to four days of mild-fever associated with non-bloody diarrhea and vomiting episodes (1). All children < 5 years old are supposed to be affected with at least one episode of AGE (9).

AGE incurs high annual hospital costs on health care system (10). AGE has been responsible for 1 in 10 hospitalization episodes in children (7). With appropriate rehydration and antimicrobial therapies, the condition is generally resolved within one to two weeks. Due to the self-limiting nature of AGE, antibiotic therapy is not generally indicated in majority of the patients (11). Immunocompromised patients included very young children and those with severe dehydration; however, the recovery period may last longer (11). Few studies have been conducted on the clinical course of severely dehydrated children with AGE (12).

This was a single-center cross-sectional and hospital-based survey conducted in 2016. The study population included 138 children presented with AGE and hospitalized in Amir-Al-Momenin Hospital of Zabol city. The clinical symptoms included diarrhea, abdominal pain, nausea, vomiting, and low-level fever. The inclusion criterion was severe dehydration (> 10%), according to the Vesikari score (13).

Children with hepatitis and culture positive AGE were excluded. The patients with complicated AGE who needed a hospital-stay of more than five days were also excluded. Another exclusion criteria included the history of hepatic or endocrine disorders, growth failure, neuromuscular disorders, and other serious clinical conditions.

Stool samples were obtained during the active disease period (within one to five days from clinical presentation). The stool samples rendered negative culture results for bacterial growth were included. Blood samples were obtained for investigating routine laboratory tests including blood counts, erythrocyte sedimentation rate (ESR), blood urea nitrogen (BUN), creatinine, fasting blood sugar (FBS), and serum Na, Ca, and K levels. Levels of hepatic enzymes, AST, and ALT were determined in all the patients. Abnormal AST and ALT were considered at levels > 50 IU/L. The only indicated therapy for the patients was either oral or IV rehydration. AGE resolved within five days in all the patients.

Statistical analysis was performed in the SPSS 22 software. The normality of the data was assessed by the Shapiro-Wilk test. Frequency and mean ± standard deviation were used as descriptive statistics. Independent sample student t-test and One-way ANOVA were used to compare the mean values of the studied variables between groups (i.e. elevated or normal liver enzymes). P < 0.05 was assigned as the statistical significance threshold. In present study, we assessed the extent of elevated liver enzymes; AST and ALT, in severely dehydrated children with AGE. Most of the patients (60, 43.5%) showed temporary isolated AST elevation along with normal ALT level. Concurrent elevated AST/ALT was observed in 22 (15.9%) children. The elevated levels returned to normal thresholds within one week without any complications and persistent hepatic damage. Isolated elevations in AST and ALT have been reported in 25.4% and 15.4% of children with viral AGE triggered by rotavirus respectively (14). This is while isolated elevations in AST and ALT have been noted in 11.9% and 6.8% of non-viral AGE cases (14). In accordance with our observation, high levels of liver enzymes spontaneously resolved in both children with viral and non-viral AGE (14). In another study on 92 patients with rotavirus induced AGE, 20% showed simultaneous increase in AST and ALT, while individual AST elevation was reported in 71% (15). Kawashima et al. (16), reported elevated levels of AST and ALT in 88.5% and 11.5% of rotavirus induced AGE respectively. In a study in Japan, elevations in AST and ALT were reported in 56% and 46% of children diagnosed with viral AGE (17). Patients with rotavirus induced AGE have shown significantly higher AST levels than those inflicted with norovirus infection; however, ALT level was not significantly different between these two groups (18). These observations, and also occasional case reports of liver injury induced by AGE-associated viral strains (19, 20), indicate a role for the viral etiology on liver function during acute AGE.

In the present study, we included only severely dehydrated (> 10%) AGE affected children. Our results further highlighted a potential association between the age and hepatic involvement in severely dehydrated children with AGE. In this regard, we noticed significant negative correlations between age and hepatic liver enzymes (AST; r = -0.230, P = 0.007, and ALT; r = -0.230, P = 0.007). In fact, age has been a prominent factor in determining the pathogenic profile in children with AGE (7, 12, 18, 25). On the other hand, the role of pathogens (i.e. various viral strains; rotavirus, norovirus, sapovirus, adenovirus and astrovirus) has been noted in influencing the clinical course of AGE (3, 26). Nonetheless, the exact role of individual viral strains on hepatic function in AGE is obscure. In this study, the viral etiologies of AGE were not characterized in our patients. However, we should note that determination of responsible viral strains in AGE is not generally indicated in uncomplicated AGE (11). Even so, the casual organism may not be identifiable in a considerable ratio of AGE patients (1, 12, 27).

In conclusion, hepatic enzymes can be temporary elevated in patients with uncomplicated acute AGE with severe dehydration. We observed that hepatic liver enzymes were associated with some inflammatory markers (ESR, platelet count, WBC). Based on this, it seems that a low-grade inflammation participates in elevation of liver enzymes in patients with AGE; however, this should be further elucidated in future studies. We also found that age may influence liver enzyme fluctuations in AGE probably through determining viral strains responsible for the disease. It is recommended to investigate the roles of specific viral etiologies on hepatic involvement in AGE.

As low-grade inflammation could be involved, the elevation of liver enzymes in AGE patients investigations are recommended on the specific inflammatory markers to clarify any association between liver involvement and inflammation in AGE. In this study, the types of viruses responsible for AGE were not determined. As the pathogenesis and the clinical course of AGE may be affected by the types of viral species, it is recommended to consider the specific role of individual viral etiologies on the fluctuations of liver enzymes in patients with AGE.

We thank the participants for their kind cooperation.

Copyright © 2019, Gene, Cell and Tissue. This is an open-access article distributed under the terms of the Creative Commons Attribution-NonCommercial 4.0 International License (http://creativecommons.org/licenses/by-nc/4.0/) which permits copy and redistribute the material just in noncommercial usages, provided the original work is properly cited.
download pdf 313.97 KB Peer Review Comments ( 126.65 KB) Get Permission (article level) Import into EndNote Import into BibTex
Number of Comments: 0