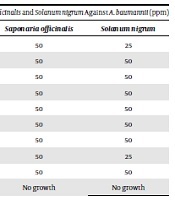 Acinetobacter baumannii is a non-fermentative gram-negative bacterium that is common in nosocomial infections. As an opportunistic pathogen in hospitals, it is resistant to a large number of antibiotics and responsible for numerous infections such as bacteremia, pneumonia, meningitis, urogenital infections, and surgical wound infections.

We isolated 10 strains of Acinetobacter baumannii from urine samples of patients referring to Zabol Hospital. Solanum nigrum and Saponaria officinalis plants were harvested from Zabol city, dried in shade, milled, placed in a solvent solution (96% ethanol) for 24 h, and extracted using a rotary machine. The minimum inhibitory concentration (MIC) and the least bactericidal concentration were determined by the microdilution method.

This study showed antimicrobial effects of Solanum nigrum and Saponaria officinalis extracts against A. baumannii. Therefore, they can be proposed as treatments for infections caused by this bacterium.

Acinetobacter baumannii is a non-fermentative Gram-negative coccobacillus belonging to the family Moraxellaceae. This bacterium is extensively present in the environment and can be found in the respiratory tract, the genitourinary system, and the skin as an opportunistic bacterium (1).

A. baumannii is the most important species of the genus playing an important role in hospital infections. This bacterium survives several days on the surfaces of hospital equipment even in dry conditions and inappropriate environments and it is isolated from different hospital infections such as pneumonia, endocarditis, meningitis, and skin infection (2).

Some of these factors include binding, staining on dry and solid surfaces, the ability to provide essential nutrients such as iron, followed by stimulation of epithelial cells and production of gelatinase (4).

The transmission of the bacterium from colonized individuals to susceptible people can cause disease. Acinetobacter, especially A. baumannii, is potent to produce biofilms that may play a major role in the process of colonization. Biofilms cause bacteria to withstand disinfectants and survive in inappropriate environmental conditions and give this opportunity to the cells inside the biofilm to transfer genes encoding antibiotic resistance (5).

Saponaria officinalis is a perennial plant from the carnation family (Caryophyllaceae) with many names, including common soapwort, bouncing-bet, crow soap, wild sweet William, and soapweed. There are at least 20 species of soapweed.

The current study aimed to investigate the antibiotic resistance pattern of A. baumannii and the effects of Solanum nigrum and Saponaria officinalis extracts on the isolates from patients hospitalized in Zabol Hospital.

In this study, 10 strains of A. baumannii were isolated from urine samples of hospitalized patients with urinary tract infections referring to Amir Al-Momenin Hospital in Zabol, Iran. The clinical specimens were inoculated on MacConkey agar and Blood Agar media (Merck, Germany) and the plates were incubated at 37ºC for 24 - 48 h. The oxidase test was performed in the case of growth after incubating and observation of Cocci and gram-negative diplococytes. The following steps were performed in biochemical tests: cultivation on MacConkey agar, incubation at 37 and 42ºC, citrate test, motility test.

Antibiotic resistance to ceftazidim (30 μg), gentamycin (10 μg), azitromycin (30 μg), and ampicillin (30 μg) was examined by the disc diffusion method following the standard protocols. The antibiotic discs were purchased from Padtan Teb Co. (Tehran, Iran). A. baumannii isolates were assessed based on their size of inhibition zones and classified into three groups including susceptible (S), intermediate-resistant (I), and resistant (R) according to the CLSI criteria (8).

The leaves of Solanum nigrum and Saponaria officinalis were collected from Zabol, Southeastern Iran, approved at the Kerman Azad University Herbarium, and finally dried at room temperature. Then, in the laboratory, the samples were ground and transferred into glass containers for preservation until extraction.

For extraction, 20 g of the dry material of fresh leaf was diluted in 60 mL of ethanol 95% in a grinding machine for 10 to 15 min to separate the extract phase for a day (shaking occasionally with a shaker). The supernatant was filtered through Whatman No. 1 filter paper. The extracts were secured aseptically at 5ºC for further use. The minimum inhibitory concentration (MIC) and minimum bactericidal concentration were determined using microdilution and macrodilution techniques.

All tests were performed in Muller-Hinton broth with a concentration of 0.5% (v/v). Subsequently, serial dilutions of the extract were made in a 96-well microtiter plate ranging from 0.3 mg/mL to 10.00 mg/mL. Next, 10 μL of indicator solution (prepared by dissolving 10-mg extract in 2 mL of DMSO) and 10 μL of Mueller-Hinton broth were added to each well. Eventually, 10 μL of bacterial suspension (106 CFU/mL) was added to each well to prepare a concentration of 104 CFU/mL. The plates were loosely maintained by a join to prepare a concentration of 10 film to ensure that the bacteria were not dehydrated. Subsequently, plates were gathered in triplicate and placed in an incubator at 37ºC for 18 - 24 h. Then, the color change of the samples was visually measured. The lowest concentration at which the color change occurred was considered as the MIC value. The average of the three values showed the MIC values for the experimental extracts. The MIC shows the lowest concentration of the extract at which the microorganism does not show any visible growth. Microorganism development was demonstrated by turbidity. The MBC was defined as the lowest concentration of the extract at which the incubated microorganisms were perfectly killed. The outcome was expressed as mean. (9, 10).

The antibiotic resistance pattern of 10 strains showed that all of them were susceptible to CZ-GM-AZM antibiotics and only 16.6% were resistant to AM.

In a study by Saadatianfarivar et al. who examined the frequency of A. baumannii at Rasoul Akram Complex Surgical Care Unit, the results showed that A. baumannii was isolated from 21 out of 100 collected samples (21%). The isolated A. baumannii strains showed a resistance rate of 100% to rifampin, penicillin, erythromycin, and tetracycline, 95.2% to gentamicin, nalidixic acid, amikacin, streptomycin, cefazolin, and chloramphenicol, and 90.5% to ceftazidime and ciprofloxacin (11).

In a study by Azizi and Shahcheraghi who studied the frequency of tetA and tetB genes, the results showed that all isolates were resistant to gentamicin, ciprofloxacin, piperacillin, cefotaxime, ceftazidime, and tetracycline. The resistance rates to minocycline and imipenem were 89% and 85%, respectively. All isolates were known to be resistant to several antibiotics. The tetA and tetB genes were identified in 75.3% and 43% of the isolates, respectively (12).

In the study by Rahbar et al., A. baumannii resistance rates to ceftriaxone, ceftazidime, amikacin, and ciprofloxacin were 91%, 84%, 85%, and 90%, respectively. (13) In a study conducted by Asadollahi et al. in 2010, the prevalence of tetA and tetB was 95.5% and 65%, respectively (14). In a 2003 study, Ayan et al. found that all 52 studied strains were resistant to piperacillin, piperacillin-tazobactam, ticarcillin-clavulanic acid, cefepime, cefotaxime, ceftazidime, ceftriaxone, gentamicin, and aztreonam. The resistance rates to tobramycin, ciprofloxacin, ampicillin-sulbactam, cotrimoxazole, and amikacin were 5%, 8%, 55%, 66%, and 74%, respectively (15).

In a study conducted by Smolyakov et al. to investigate infections caused by A. baumannii with multidrug resistance, it was found that 93% of the strains were susceptible to imipenem and 100% were susceptible to colistin and ampicillin-sulbactam (18). Guardabassi in 2000 reported that 50 species of A. baumannii isolated from 35 clinical specimens and 15 water samples were tetracycline-resistant. Species isolated from water were non-Acinetobacter baumannii, most of which (12 out of 15 cases) were sensitive to tetracycline (19).

Another study showed that the MIC of gentamicin was 1024 μg/mL (20). In a study by Rigi and Sancholi, who investigated the antimicrobial activity of Solanum nigrum, the results showed that the MICs of the methanolic extract of leaf were 12.5, 25, and 25 ppm against bacteria Aeromonas hydrophila, Yersinia racria, and Streptococcus inuia, respectively (21).

In a study by Rezaie Keikhaie, who investigated the effect of Shiitji vetiver on A. baumannii, the results showed the MIC was 0.31 mg/mL and only one strain was inhibited at this concentration (22).

In another study, antimicrobial and antifungal activity of the methanolic extract of Solanum nigrum and Solanum xanthocarpum at concentrations of 5, 10, and 15 mg/mL led to the inhibition of Gram-negative and Gram-positive bacteria (24).

The study by Shahiladevi and Jegadeesan assessed antimicrobial activity of Black Fruit Variant of Solanum nigrum L. The antimicrobial effects of three different concentrations, 25 μg/mL, 50 μg/mL, and 100 μg/mL, of 50% of the ethanol extract of Solanum nigrum (black fruited) were determined against two Gram-negative bacteria, Escherichia coli and Pseudomonas aeruginosa, a Gram-positive bacterium, Staphylococcus aureus, and three species of fungi, Aspergillus niger, Aspergillus flavus, and Candida albicans, by the well and disc diffusion methods (25).

In a study by Modilal et al., the inhibition zone diameters were 17, 15, 13, and 12 mm at a concentration of 100 mg/mL of Solanum nigrum ethanol extract against Escherichia coli, Klebsiella pneumoniae, Staphylococcus aureus, and Pseudomonas aeruginosa, respectively (26).

The study by Parameswari et al. was carried out to assess the antibacterial activity of ethanolic and methanolic extracts of the root, berries, and whole plant of Solanum nigrum. The results showed that the ethanol extract inhibited Bacillus subtilis L., Escherichia coli, Klebsiella pneumoniae, and Pseudomonas aeruginosa (27).

Copyright © 2019, Gene, Cell and Tissue. This is an open-access article distributed under the terms of the Creative Commons Attribution-NonCommercial 4.0 International License (http://creativecommons.org/licenses/by-nc/4.0/) which permits copy and redistribute the material just in noncommercial usages, provided the original work is properly cited.
download pdf 117.37 KB Get Permission (article level) Import into EndNote Import into BibTex
Number of Comments: 0