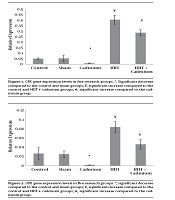 Cadmium is a heavy metal toxicant that effectively disturbs the body's oxidant-antioxidant status; however, high intensity interval training (HIIT) has been reported to improve antioxidant indices such as catalase (CAT) and glutathione peroxidase (GPX), which neutralize free radicals.

The present study aimed to review the effect of HIIT on CAT and GPX gene expression in the heart tissue of rats with cadmium toxicity.

Twenty-five male Sprague Dawley rats were selected and were divided into five groups, of five rats (1) control, (2) sham, (3) cadmium, (4) HIIT, and (5) HIIT and cadmium. During eight weeks, rats in groups 4 and 5 performed three sessions per week of HIIT and groups 3 and 5 received 2 mg/kg of cadmium daily in peritoneum. To analyze the findings of the research One-way ANOVA with Tukey’s post hoc tests were used (P ≤ 0.05).

It appears that HIIT can improve the CAT and GPX gene expression in the heart tissue of cadmium-infected rats.

With regard to population growth and technological advancement, and the consequent contamination of the environment, the health of people in the community has been threatened more and more (1). Cadmium (Cd) is one of the heavy metals most frequently found in water, food, and even smoke (2). In the human body, Cd is accumulated with a long biological half-life (3). It has been reported that Cd can contribute to stimulate the formation of reactive oxygen species (ROS) and consequently induce the damage to different cells (4, 5). Cd causes abnormal expression of antioxidants in cells as well as increases deoxyribonucleic acid (DNA) damage and lipid peroxidation (6, 7). Heavy metals with various mechanisms can disrupt the cardiovascular system (8). By producing free radicals, DNA damage, and peroxidation of lipids, they interfere with the antioxidant defense and induce oxidative stress. Protecting cells from oxidative processes caused by Cd leads to the formation of ROS and free radicals in both forms, i.e., the enzymatic and non-enzymatic defense system of the cell (9, 10). Oxidative stress has been proposed as the most important mechanism underlying the toxic effects of Cd in many organs (11). It is defined as an alteration in the equilibrium state between oxidant and antioxidant agents in cells. It has been demonstrated that Cd itself is unable to generate free radicals directly; however, it is responsible for indirect generation of ROS, including superoxide radical and hydroxyl radical (11). Antioxidant enzymes such as superoxide dismutase (SOD), catalase (CAT), and glutathione peroxidase (GPX) are suppress by Cd; however, change in noted enzymes depends on the concentration and time of cadmium (12-14). Increasing the glutathione reductase activity along with the unchanged activity of the GPX enzyme indicates an increase in conversion of oxide glutathione to reduction and increased antioxidant activity in the heart following exercise. In addition, increased activity of catalase can be attributed to the increased ability of the heart tissue to fight with superoxide ion during exercise (15). On the other hand, although the role of endurance training in physical health has been well documented, the main reasons for not engaging in this kind of training are lack of time for individuals (16). Hence, the creation of suitable training methods with shorter time periods, which has the same beneficial effects as endurance training, has been considered. One of these procedures is high intensity interval training (HIIT) (17). HIIT is a combination of intensive aerobic courses (above 90% of the maximum oxygen consumption (VO2max)) along with moderate inactive or inactive active recovery periods (17).

On the other hand, it is believed that high intensity and prolonged physical and sporting activities can act as a double-edged sword. Exercise and physical activity and being able to improve the antioxidant defense system can also produce free radicals that damage DNA from different sources (18, 19). In this regard, Kai-lo et al., in myocardial infarction (MI) rats, found that eight weeks of HIIT reduced oxidative pressure by increasing SOD and GPX concentrations (20). Fisher et al., observed a significant increase in the activity of anti-oxidant SOD and GPX enzymes in lymphocytes after HIIT; however, this increase was not significant (21); Marcel Pimenenta et al., showed that HIIT reduces oxidative stress in the skeletal muscle in ovariectomized rats (22). Also, Cuba et al., reported that SOD and GPX increase after 12 weeks of interval trainings in men who consume cigarettes (23).

Considering that the results of studies due to intensity and type of exercise are contradictory on antioxidant indices, especially in the heart tissue, and the researchers have not yet been able to introduce the most appropriate training method to improve antioxidant indices in non-athlete subjects, therefore, the findings of this study appear to provide more information to researchers in the field of sport sciences. Consequently, this study aimed to investigating the antioxidant effect of high intensity interval training on cadmium-induced cardiotoxicity in rats.

Twenty-five male Sprague Dawley rats with an approximate age of eight weeks were purchased from the Pasteur Institute of Shiraz and transferred to the Laboratory of Sport Physiology at Marvdasht Branch, Islamic Azad University. To adapt to the new environment, the rats were kept at a laboratory for one week; then, they were divided into 5 groups of 5 rats; (1) control, (2) sham, (3) cadmium, (4) HIIT, and (5) HIIT with cadmium consumption. During 8 weeks, rats in groups 3 and 5 received 2 mg/kg of cadmium per day in peritoneum (24). In addition, rats in groups 4 and 5 performed three sessions per week of HIIT (25), and rats in group 2 received cadmium solvent (normal saline) in peritoneum all over the study. In this research, HIIT comprised three sessions per week of running on the treadmill with a given severity and duration.

Forty-eight hours after the final training session, all rats were anesthetized (injection of ketamine and xylazin), and then, to measure the research variables the heart, tissues were removed. For molecular analysis at the gene expression level, first, extraction of RNA from the heart tissue was carried out according to the manufacturer’s protocol (Sinagen, Iran) then, drawing on the light absorbance property at wavelength of 260 nm, the concentration and degree of purity of the RNA sample was quantitatively obtained using the following equation:

After extracting RNA with high purity and high concentration from all of the samples, cDNA synthesis steps were taken according to the manufacturer’s protocol, and then, the synthesized cDNA was used for reverse transcription reaction. Initially, the designed primers for genes were examined, and genes expressions were examined with quantitative q-RT PCR method by QIAzol (Cat No./ID: 79306;USA); RealQ Plus Master Mix Green high ROX (No.: A325402; Denmark) and Applied Biosystems StepOne™ and StepOnePlus™ Real-Time PCR (USA). The sequence of primers used from previous studies (27) is presented in Table 1. To analyze the findings of the research, the Shapirowilk test, one-way analysis of variance (ANOVA), and Tukey’s post hoc test were used (P ≤ 0.05).

Table 1. The Sequence of Primers Used in the Study Several mechanisms have been proposed for cadmium toxicity; nonetheless, various studies have shown that the main cause of damage caused by cadmium is oxidative stress in cells. Cadmium stimulates the production of free oxygen radicals in cells, which results in the peroxidation of lipids and proteins and damage to DNA and, on the other hand, leads to the death of cells by altering the antioxidant system of the cells (30).

The findings of this study showed that eight weeks of HIIT led to a significant increase of CAT and GPX gene expression levels in rats. It has been reported that 12 weeks of moderate to medium intensity training, and eight weeks of HIIT (20, 31) lead to the improvement of CAT, GPX, and SOD anti-oxidant enzymes.

Regarding the effect of sport activities, the intensity of exercise can lead to the release of free radicals that in turn stimulate the metabolic pathways of antioxidants. At the beginning of every activity that starts at a low intensity, that is, the amount of free radical production is much lower, the primary antioxidant defense line that is activated is the SOD. In the first stage, when free radicals are produced, superoxide anions are immediately dimutase though SOD and converted to H2O2. SOD continues its activity until intensive exercise is performed at a level that does not require the release of further radicals. However, with increasing the intensity of exercise, GPXs are activated and neutralize H2O2. Therefore, high GPX activity would be associated with a lower SOD increase (32). In addition, in the present study, eight weeks of HIIT led to a significant increase in CAT and GPX. For justifying the increase of antioxidant defense enzymes following sport activities, the intensity and duration of sports activities, as well as the sharp increase in the levels of oxygenation and free radical production can be mentioned. The findings of the present study are consistent with Hamakawa et al. It seems that adjusting the amount of antioxidant enzymes as a result of exercise is dependent on high levels of oxidative stress in the skeletal muscle (33).

The increase in these enzymes in the training groups is likely to be due to further increase in lipid peroxidation and free radical production. Therefore, it can be said that being a variable such as sport activity may increase the antioxidant defense by possibly increasing the activity of SOD and CAT due to increased detoxification capacity. Concerning the effects of sport activities on the increase of GPX levels, it should be noted that HIIT through phosphate and calcium-dependent pathways and the activity of AMPK-dependent and calmodulin-bound kinase enzymes, as well as through the activation of the FOXO3 pathway, increases gene expression of antioxidant enzymes and decreases oxidative stress caused by high intensity sport activities (34, 35).

It has also been shown that high intensity sport exercises are associated with GPX activity. Lack of control of the animal’s nocturnal activity as well as lack of measurement the cadmium uptake are the limitations of this research. In this study HIIT could improve the reduced antioxidant capacity induced by cadmium poisoning; the controlled investigation of safe and reasonable non-pharmaceutical strategies, such as exercises, especially in the presence of other pollutants in animal species, in a long run can be taken as an effectively fundamental research to be considered in future human research.

It appears that HIIT can improve the CAT and GPX gene expression in the heart tissue of cadmium-infected rats.

Considering the fact that the present study is a part of the doctoral dissertation approved by the Islamic Azad University of Larestan, the authors of this article express their gratitude and appreciation for the spiritual support of the Research and Technology Department of this university branch.

Copyright © 2019, Gene, Cell and Tissue. This is an open-access article distributed under the terms of the Creative Commons Attribution-NonCommercial 4.0 International License (http://creativecommons.org/licenses/by-nc/4.0/) which permits copy and redistribute the material just in noncommercial usages, provided the original work is properly cited.
download pdf 154.69 KB Peer Review Comments ( 117.25 KB) Get Permission (article level) Import into EndNote Import into BibTex
Number of Comments: 0