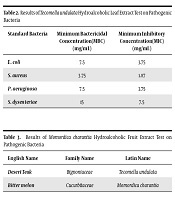 Today, due to microbial resistance to antibiotics, herbs and their compounds are commonly used as alternative antibiotics. The extracts of some plants can inhibit the growth of microorganisms as new antimicrobial agents. Thus, they can have great applications in medical science and food industry.

The aim of this study was to investigate the antibacterial effects of Tecomella undulata and Momordica charantia extracts on Escherichia coli, Staphylococcus aureus, Pseudomonas aeruginosa, and Shigella dysenteriae.

After the identification and collection of plant samples, they were dried and underwent extraction using a rotary machine following the soaking method. The microdilution method was used to determine the antibacterial properties of the extracts on standard strains of Escherichia coli, Staphylococcus aureus, Pseudomonas aeruginosa, and Shigella dysenteriae.

The results of this study revealed that various concentrations of the hydroalcoholic extract of Tecomella undulata and Momordica charantia had inhibitory effects on human pathogens.

Bacterial diseases are among the most well-known diseases that have always affected humans and much effort has been made to identify, control, and treat these diseases (1). The plants synthesize materials to combat and protect themselves against insects and microorganisms. Moreover, they can produce antimicrobial metabolites to affect the natural growth of microorganisms. Despite numerous medical discoveries in various fields of drug and advanced therapy, the rates of infectious diseases in developing countries are rising (2). At the same time, a large portion of outbreaks and human mortalities is attributed to bacterial diseases that can enter the human body in various ways, such as drinking water, breathing, and eating food (3).

Escherichia coli as a Gram-negative bacterium belonging to the Enterobacteriaceae family is one of the most important agents causing urinary tract infections and bacteremia. Escherichia is also one of the most common bacteria causing hospital infections (4). Staphylococcus aureus, with a relatively high prevalence, is among the main causes of nosocomial infections and contributes to the development of a wide range of diseases. It is estimated that 25% - 30% of people in different populations carry S. aureus in their nose, which in most cases is the source of the infection of natural carriers (5). As an opportunistic and important hospital pathogen, Pseudomonas aeruginosa has great resistance to antibiotics (6, 7) so that the treatment of infections caused by this bacterium has always been a challenge (8, 9). Moreover, P. aeruginosa is one of the main causes of mortality in immunocompromised patients and individuals with severe burns and cystic fibrosis (10, 11); thus, it is considered a very serious threat to hospitalized patients worldwide (12). Shigella dysenteriae is also one of the key bacterial causes of bloody diarrhea, affecting about 450000 people each year in the United States can cause complications, including bacteremia and even death, especially in children, adults, and immunocompromised patients (13).

There is a constantly increasing tendency of producing medicinal plants and increasing demand for these natural products in the world. Following the identification of possible negative effects of chemical compounds since the mid-twentieth century, these compounds have been replaced significantly by herbal drugs in many cases (14). Tecomella undulata, with the scientific name of Reodana and Rohida, is called Samang and Parpovak in Fars and Sistan and Baluchistan provinces, respectively (15). As a shrub, it is an evergreen tree of the Bignoniaceae family (16). The plant organs are used to treat syphilis and eczema. Its skin has sedative, cardiotonic, and antispasmodic activity. The plant’s is used to treat spleen, gonorrhea, and hepatomegaly. Bitter cucumber with the scientific name of Momordica charantia and the English name of Bitter melon is native to Asia, and was used in ancient medicine for the treatment of infectious diseases and pain relief (17).

3.1. Collection of Plants and Preparation of Extracts

The leaves of Tecomella undulata and fruits of Momordica charantia were harvested, dried, and ground after being identified in all over the cities of Jiroft and Chabahar (Table 1). For ease of extraction, flocculants were powdered by an electric mill .The extraction was done by the maceration or soaking method. To prepare the extracts, 100 mL of ethanol 98% and distilled water was added to 10 g of dried powder in a sterile container and kept on a shaker in room for 24 hours. Then, the extracts were filtered using filter papers and the extra solvent was removed using a rotary machine. The residual solution containing the extracts is poured into a sterile glass container and placed in an oven at 45°C to dry completely. The dried extracts were collected and kept in a refrigerator away from the light until tests were performed (18).

Table 1. Features of Plants Used in This Study

To prepare microbial suspensions, a day before the experiment, a small portion of bacterial colonies was transferred to the agar (German mercury) culture medium. After the growth of bacterial cells on the medium surface, the surface was washed with the normal saline solution and the concentrated microbial suspension was calibrated. Then, some bacterial suspensions were poured into a tube containing normal saline and its optical density was measured with a spectrophotometer at 530 nm wavelength. Then, Its turbidity was measured by spectrophotometer at 530 nm. The final concentration of the suspension was determined to be 1.5 × 108 CFU (19).

For this test, Escherichia coli, Staphylococcus aureus, Pseudomonas aeruginosa, and Shigella dysenteriae strains were used. Using the microbroth dilution method, in each well of a microplate was added 100 μL of nutrient broth medium (Merck, Germany). Then, 100 μL of diluted extracts were added to the first well and after mixing, 100 μL was removed from the first well and added to the second one. This procedure was repeated to the last well and finally, the last wells were added with 100 μL of extraction medium and 10 μL of the microbial suspension containing 108 units per ml equal to 0.5 McFarland. Also, two wells were considered as controls, one containing only the extract and the other having only bacterial suspensions. After being incubated for 24 hours at 37°C, the first non-turbid well was considered as the MIC, which indicated the minimum inhibitory concentration of the extract for growth inhibition (20).

The results of this study showed that the MICs of Tecomella undulata leaf extract against Escherichia coli, Staphylococcus aureus, Pseudomonas aeruginosa, and Shigella dysenteriae were 7.5, 1.87, 7.5, and 3.75 mg/mL, respectively, indicating the highest effect against Staphylococcus aureus with a minimum concentration of 1.87 mg/mL (Table 2). The highest lethal concentration of the extract of Tecomella undulata was 15 mg/mL against Escherichia coli and Pseudomonas aeruginosa (Table 2).

The results of this study showed that showed that the MICs of Momordica charantia fruit extract against Escherichia coli, Pseudomonas aeruginosa, Staphylococcus aureus, and Shigella dysenteriae were 3.75, 3.75, 1.87, and 7.5 mg/mL, which showed the highest effect on Staphylococcus aureus with a minimum concentration of 1.87 mg/mL (Table 3). The highest lethal concentration was 15 mg/mL against Shigella dysenteriae (Table 3).

One of the current problems with the treatment of bacterial infections is their increased resistance to antibiotics. Antibiotic-resistant bacteria can cause significantly more deaths than non-resistant bacteria (21, 22). With increasing the resistance of antibiotics, efforts are being made around the world to use new therapies (22). As important sources of new chemotherapy drugs, medicinal herbs are of particular interest due to their wide range of bioactive constituents. Herbal medicines are more compatible with living organisms, including the human body because of their natural origin compared to chemical drugs; they produce fewer side effects (23, 24).

The results of this study showed that hydroalcoholic extracts of Tecomella undulata and Momordica charantia plants at different concentrations could inhibit Gram-positive and negative bacteria. In a study by Abhishek et al., the MICs of the methanolic extract of Tecomella undulata against B. subtilis, E. faecalis, E.coli, K. pneumonia, M. luteus, P. vulgaris, and P. aeruginosa were 4, 2, 0.1, 1 - 0, 2 - 0, and 2 mg/mL, respectively (25).

In a study conducted by Akinsiku et al. using synthetic nanoparticles from Momordica charantia stems on some bacteria, the synthesized nanoparticles showed antibacterial and inhibitory effects. The results also showed that the lowest inhibitory concentration and the least destructive concentration were 12.5 mg/mL and the lowest activity of these particles was detected against P. aeruginosa with MIC of 50 mg/mL and MBC of 100 mg/mL (28).

In a study by Nguyen et al., the antimicrobial activities of four types of extracts including hexane, chloroform, ethyl acetate, and methanol-water were studied against four bacterial species and four fungal species. The results revealed that chloroform extract was more effective than the other extracted oil essences so that the MIC against E. coli and B. subtilis was 200 mg/mL and in the case of A. niger, it was 100 mg/mL. Also, A. niger had a relatively high sensitivity to all extracts, except for methanol-water extract (29).

According to the results of this study, hydroalcoholic extracts of Tecomella undulata and Momordica charantia had significant antimicrobial effects on Escherichia coli, Staphylococcus aureus, Pseudomonas aeruginosa, and Shigella dysenteriae. Finally, it can be concluded that the extracts of these plants can be used for their antimicrobial effects in the pharmaceutical and food industries and they can be an important and natural source of compounds for controlling and treating diseases caused by these bacteria. However, the clinical use of the extracts of these plants requires further study.

Copyright © 2019, Gene, Cell and Tissue. This is an open-access article distributed under the terms of the Creative Commons Attribution-NonCommercial 4.0 International License (http://creativecommons.org/licenses/by-nc/4.0/) which permits copy and redistribute the material just in noncommercial usages, provided the original work is properly cited.
download pdf 135.63 KB Peer Review Comments ( 1.18 MB) Get Permission (article level) Import into EndNote Import into BibTex
Number of Comments: 0