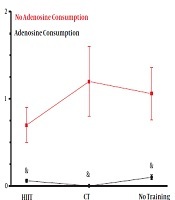 how to cite: Farsi S, Ahmadi N, Azarbayjani M A. Effect of Continuous and Interval Training with Adenosine Consumption on A1 and A2A Adenosine Receptors in Heart Tissue of Obese Rats. Gene Cell Tissue.7(2):e97210. doi: 10.5812/gct.97210.

Recent studies have shown that obesity and metabolic disorders are major contributors to heart diseases, and exercise training and proper diets can prevent these diseases.

The present study aimed to investigate the effect of continuous and interval training with adenosine consumption on adenosine A1 and A2A receptors in the heart tissue of obese rats.

Over the past few years, obesity has been the focus of many researchers. A high percentage of people with cardiovascular disease are obese. There are also strong associations between obesity and atherosclerosis, increased risk of myocardial ischemia, and stroke (1, 2). Studies have shown that pathological cardiac hypertrophy, hypertension, endothelial dysfunction, and increased physiological markers of heart disease occur following obesity (2, 3).

The heart, as a vital organ, pumps a lot of blood into tissues, which requires a lot of energy. Much of this energy is produced by the oxidation of various energy substrates and Adenosine Triphosphate (ATP) (4). Adenosine is a key extracellular molecule whose activity is activated by four G protein-coupled receptors, including A1, A2A, A2B, and A3, present in smooth muscle and coronary endothelial cells (4, 5). On the other hand, the activation of potassium channels and the inhibition of adenylate cyclase activity in cardiac, smooth muscles and microscopic vessels have been reported as factors for adenosine receptors dysfunction following metabolic disorders (6). In the present study, we focused on adenosine A1 and A2A receptors because these receptors are abundantly expressed in cardiac tissue and are the most important receptors among other types of adenosine receptors in the cardiac system (4-6). The rat A1 receptor gene was cloned in 1992, and subsequent studies showed its protective effect on cardiac tissue during stress/injury. The activation of the A2A receptor can cause vasodilation in the coronary artery (4-6).

Previous studies have shown that lifestyle changes and physical activity can have beneficial effects on the health of people with obesity and metabolic syndrome (7, 8). Researchers have suggested that exercise may facilitate insulin-induced glucose uptake and contraction during exercise through the adenosine A1 receptor (9).

Various studies have assessed the effect of exercise training on cardiac tissue metabolism. It seems that the type and intensity of exercise have different effects on cardiac metabolism. For example, moderate-intensity endurance training increased the protein levels of adenine nucleotide hydrolyzing enzymes and nucleotidase in rats (10). One session of high-intensity training significantly reduced R-phenyl isopropyl adenosine in the heart tissue of rats (11). On the other hand, adenosine is one of the key regulators of metabolisms of body tissues and endocrine purine nucleosides that are released from hypoxic tissues and contribute to hypoxia-induced angiogenesis. Researchers believe that adenosine increases the adenosine levels following sports activity, increases coronary blood flow and angiogenesis, and improves low tissue oxygen in the myocardial muscle (12).

In this experimental study, 64 eight-week-old male Wistar rats, weighing 156.71 ± 27.42 g, were purchased from the Pasteur Institute of Amol and kept in animal house (Mazandaran University of Medical Sciences) in laboratory conditions at 12:12 h dark/light cycle, 22 ± 3ºC, and 50% - 60% humidity in transparent polycarbonate cages for one week.

The present study was conducted in two stages, including making obesity and training. For making rats obese, a high-fat diet with 40% fat (20% soybean oil and 20% animal fat), 13% protein, and 47% carbohydrate was used before and during the study protocol. This study was conducted following the guidelines for the use and care of laboratory animals (15).

To measure obesity indices, the Lee index was used. In this standard, rats over 310 g are known to be obese (16). Based on the body weight, obese rats were divided into seven groups, including (1) control, (2) continuous training (CT), (3) high-intensity interval training (HIIT), (4) CT and adenosine consumption, (5) HIIT and adenosine consumption, (6) adenosine consumption, and (7) sham. It is noteworthy that eight healthy rats with a regular diet (Behparvar Company, Karaj) containing 58% carbohydrate, 13% fat, and 28% protein were used to examine the changes and effects of obesity on the variables of the study.

After obtaining the average of maximum speed to determine the maximum oxygen consumption (VO2max), the Bedford et al. (16) incremental test was performed on all rats for 12 weeks of continuous and interval training. At the beginning of each session, a warm-up was done consisting of running for three minutes at 10 m/min, followed by HIIT at 85% to 90% VO2max equivalent to seven attempts of one minute, speed of 31 m/min, and active rest between intervals with six attempts, speed of 15 m/min in the first week; with an average gradual increase of 2 m/min per week, it reached 10 one-minute attempts at a speed of 55 m/min and active rest with 9 one-minute attempts (between intervals) at a speed of 25 m/min in week 12. Continuous training started at 65% VO2max equivalent to 20 m/min for 15 min in the first week, which gradually reached 25 m/min for 31 min in week 12. The training was completed by warming up for 3 min at 10 m/min and 2 min at 15 m/min and cooling for one minute at 15 m/min and 2 min at 10 m/min. Rats were trained in both groups for five days a week, with two days of rest in the middle and weekend days for 12 weeks (15).

After 48 h of the last training session, rats were anesthetized by the intraperitoneal injection of a combination of ketamine (30 - 50 mg/kg) and xylazine (3 - 5 mg/kg) (17). The heart was excised and washed by ice-cold saline. Left Ventricle (LV) was removed and frozen in liquid nitrogen and stored at -80ºC.

The RNA was extracted from LV tissue (80 - 100 mg) of rats using the RNA extraction kit (Bioneer, Catalog Number k3090, Korea). Then, the RNA was added to a specific kit (Bioneer, Korea) to make cDNA. The real-time PCR was performed using the SYBR Green kit (Qiagen, Catalog Number 204052, Germany) and specific primers using the Corbet real-time PCR machine. All stages were performed following the instructions of kit manufacturers. The sequences of specific primers are presented in Table 1. We used glyceraldehyde-3-phosphate dehydrogenase (GAPDH) as the housekeeping gene, as it is commonly used by biological researchers. Finally, after obtaining CTs, the data were calculated using the Pfaffl method (17, 18).

The Shapiro-Wilk test showed that the data had normal distributions. Thus, the independent samples t-test, two-way Analysis of Variance (ANOVA), and Bonferroni’s post hoc test were used for inferential analysis. Because of the low sample size, non-parametric tests were also conducted, but this did not alter the interpretation of the findings. Therefore, we only present the results of the parametric tests. The data were analyzed using SPSS version 16 software (P ≤ 0.05). Table 3. Results of Two-Way Analysis of Variance on the Effects of Exercise Training, Adenosine Consumption, and Their Interaction on A1 and A2A/GAPDH Gene Expression in the Heart Tissue of Obese Rats The results showed that the high-fat diet increased A1 and A2A levels in the heart tissue of rats. Researchers believe that adenosine interacts with the nervous system to control vital functions and muscle function (19). The increased levels of adenosine receptors following a high-fat diet depend on increased oxidative stress, pro-inflammatory factors, and inflammatory factors. Also, the decreased entry of energy substrates into the cell activates proteins to increase adenosine receptor expression as a compensatory mechanism to reduce nutrients within the cell, thereby absorbing more fat from intestinal cells (19).

The results of the present study showed that a high-fat diet could induce an increase in A1 and A2A gene expression in the heart. On the other hand, HIIT and CT programs induced a decrease in A1 gene expression in the heart. A high-fat diet can increase lipogenesis proteins such as Sterol Regulatory Element-binding Protein (SREBP). The inhibition of AMP-activated Protein Kinase (AMPK) reduces adiponectin expression, which is dependent on increased A1 receptor expression that interferes with triglyceride synthesis and fat storage (14). A high-fat diet increases adenosine receptor 2B (A2BR) expression and inflammatory factors in the intestinal colon (19), increases A1 protein expression in liver tissue (14), and increases A2A expression in white adipose tissue of rats with high-fat diet (20). Adenosine is known to be a regulator of metabolism in coronary arteries (21). Increased blood adenosine increases the levels of Equilibration Nucleoside Transporter 1 (ENT1) and Concentrative Nucleoside Transporter 2 (CNT2) receptors, both of which can increase AMPK activity. A consequence of this event is the increased lipid entry into the cell, which can lead to decreased A1 and A2A expression (14, 22). However, one of the most important mechanisms of adenosine consumption is the activation of potassium channels and inhibition of calcium channels through adenosine A1 receptor interference with the G protein. Further, this A1-type interfering pathway can indirectly decrease calcium currents and inhibit vestibular cell membrane hyperpolarization in the heart (23). Researchers recognized the effects of adenosine drug to be dose-dependent. In a study, adenosine consumption decreased A1 expression in the liver tissue of rats with a high-fat diet (14) at a dose and duration of administration that were similar to those of the present study. An increase in the serum levels or injections of adenosine also activated a similar pathway in both of the studies. Adenosine consumption at 1.2 μmol/day had cardiac inotropic and chronotropic effects through adenosine A1 receptor (24), and a dose of 2 μg/kg body weight increased the expression of lipolysis proteins in the adipose tissue of obese rats (25).

The results also showed that interval and continuous training had significant effects on decreasing A1 levels in the heart tissue of obese rats. However, interval training was more effective than continuous training. On the other hand, interval and continuous training did not have significant effects on decreasing A2A gene expression levels in the heart tissue of rats. Previous studies have reported the functional and structural roles of adaptations, such as angiogenesis following exercise. Regular exercise seems to increase the angiogenesis and connectivity of coronary arteries by increasing angiogenesis regulatory molecules such as Vascular Endothelial Growth Factor (VEGF), thereby increasing adenosine levels in coronary blood and myocardial tissue (10). The promoted oxidation pathway following exercise increases lipolysis, activates the AMPK pathway, and decreases adenosine receptors. However, the lack of a significant decrease in A2A gene expression levels can be justified by the fact that the A2A receptor is less important than the A1 receptor in regulating the metabolism in the heart tissue and its density is less correlated with increased adenosine levels and increased blood flow to the coronary and myocardial arteries.

Previous studies have also reported that the A2A levels were not significantly different between athletes and non-athletes (26). Changes in adenosine receptors are also highly dependent on the type and intensity of training. In line with the present study, aerobic and interval training had the same effects on the reduction of A1 in the liver tissue of obese rats (14). One session of high-intensity training reduced adenosine receptors in the heart tissue of rats exposed to oxidative stress (11). This study showed that adenosine receptors are effective in enhancing antioxidant and anti-inflammatory systems and reducing lipid peroxidation induced by high-intensity exercise in the heart tissue. Also, the combination of training and adenosine consumption was significant in reducing A1, but adenosine consumption and endurance training were not significant in decreasing A2A in the heart tissue of obese rats.

Previous studies have shown that exercise activities through the increase of fatty acid oxidation, activation of the AMPK pathway, and increase of angioplasty can decrease adenosine receptors at the cell surface (10, 14) and adenosine consumption can decrease the expression of adenosine receptors by increasing ENT1 and CNT2 receptors, increasing AMPK, activating potassium channels, and inhibiting calcium channels in the heart (14, 22, 23). However, the upstream AMPK pathway in these changes is different in the two interventions. In this regard, a study by Heinonen et al. showed that A2A changes were less affected by exercise (26).

Copyright © 2020, Gene, Cell and Tissue. This is an open-access article distributed under the terms of the Creative Commons Attribution-NonCommercial 4.0 International License (http://creativecommons.org/licenses/by-nc/4.0/) which permits copy and redistribute the material just in noncommercial usages, provided the original work is properly cited.
download pdf 142.80 KB Get Permission (article level) Import into EndNote Import into BibTex
Number of Comments: 0