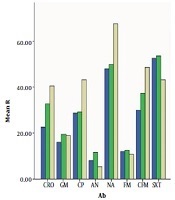 This study aimed to investigate the pattern of antibiotic resistance in Escherichia coli (E. coli) isolated from patients referred to the hospital during the years 2016 - 2018.

In this cross-sectional study, 2250 samples were taken from outpatient and hospitalized patients (inpatients) during three years (2016 - 2018). After collection, the specimens were cultured in blood agar and EMB media. One thousand six hundred and forty-two positive samples were obtained that from these, a number of 1067 specimens were recognized as E. coli. Antibiotic susceptibility was determined using a disk diffusion method on Mueller Hinton agar media for eight antibiotics. The result was evaluated based on the Clinical Laboratory Standards Institute (CLSI).

In this study, 1642 positive samples were diagnosed that the largest isolated strains were associated with E. coli (65%). About 241 samples belonged to men (22.6%) and 826 samples were isolated from women (77.4%). Based on the findings, most cases of resistance were related to co-trimoxazole with 52.6% and the highest sensitivity was related to nitrofurantoin with 81%.

The results of this study indicated that the pattern of antimicrobial resistance is increasing and urinary tract infection (UTI) caused by E. coli isolates with a high rate of resistance still remains an important healthcare problem. Therefore, continuous evaluation of the pattern of resistance in different areas is necessary for promotion of antibacterial management.

Since recognizing bacteria, humans have been always looking for effective medications against infections caused by these microorganisms. In addition, bacteria have achieved effective mechanisms to eliminate antibiotic effects. Following the development of antibiotic-resistant organisms, nowadays, we have had several reports on widespread outbreaks in different wards of hospitals (1, 2). Development of drug resistance has been considered as a common situation. The treatment of this type of illness has caused many problems (3, 4). E. coli is ubiquitous and found in water, soil, plants and makes the normal flora of human and animal intestines.

This bacterium is the most important common microbial agent of urinary tract infections. It is the cause of many hospital opportunistic infections such as sepsis, gastric wounds, urethritis, and neonatal meningitis (5-7). This organism is resistant to beta-lactam antibiotics due to the acquisition of plasmids that encode broad-spectrum beta-lactamases. Based on these facts, the treatment of E. coli infection has been problematic (8).

Overuse and misuse of antibiotics along with factors such as long-term hospitalization of patients and the use of such devices such urinary and intravascular catheters has led to the formation of multi-drug resistant bacteria and increasing the pattern of drug resistance in the hospital (9, 10).

In this cross-sectional study, 2250 specimens of outpatient and inpatients obtained from Gerash hospital in three years of 2016 - 2018 were studied. After collecting the specimens, they were cultured in blood agar and eosin methylene blue (EMB) agar media by standard loop and incubated in 37ºC, for 24 hours.

A sample was considered positive for urinary tract infection (UTI) in the light of the number of yielded colonies (105 cfu per milliliter) and the cytology of the urine through microscopic detection of bacteriuria and PMNs (≥ 8 leukocytes/mm3). However, lower colony counts associated with significant pyuria or low PMN count associated with significant colony counts was considered and analyzed in the light of the clinical picture and the patient’s immunological status (11). Also, the study excluded patients if they were pregnant, planned to become pregnant for woman, had used systemic antimicrobial agents within 14 days, had a chronic illness, or had a known anatomical or functional abnormality of the urinary tract. Afterwards the genus and species of isolates were determined based on standard methods and biochemical characteristics of isolates, such as oxidase test, nitrate revitalization, Simmon’s citrate, TSI reaction, urease, indole, movement, MR/VP and lysine decarboxylase and finally all E. coli isolates were confirmed using API20E kit (bioMerieux SA, Marcy l’Etoile, France).

SPSS version 22 (IBM, Chicago, IL, USA) was used to analyze the data and a P value of < 0.05 considered to indicate statistical significance. Antibiotic resistance according to sex

Also, through this test a significant relationship (P value < 0.05) was observed between the resistance of cefixime, ciprofloxacin, nalidixic acid, ceftriaxone, gentamicin and amikacin antibiotics and different years (2016 - 2018). Therefore, with increasing years, we observed an increase in resistance (Figure 4). Antibiotic resistance according to year

Sharma et al. (16) indicated that the rate of resistance of 3rd generation cephalosporins had been accompanied by an increase of 15% in the years of 2012 - 2014. In our study, we have used 3rd generation cephalosporins such as cefixime and ceftriaxone, which increased the resistance of both antibiotics over the years have been reported. The rate of the resistance of E. coli against trimethoprim-sulfamethoxazole in the new study has risen over the three years, and it was nearly 100 percent, while in our study the rate of resistance had been 52.6% in 2016, 53.6% in 2017 and 40.3% in 2018. Similar to our results, a study from Iran showed that among 100 E. coli isolates collected from different clinical specimens, the maximum resistance was related to amoxicillin (96%), ceftriaxone (78%), cefazolin (76%), co-trimoxazole (70%), cefotaxime (67%) and ceftazidime (66%) (18). The observation of drug resistance among E. coli strains in this study is alarming, and this could be attributed to the indiscriminate and extensive use of antibiotics, particularly beta-lactam antibiotics.

The results of this study showed that antibiotic resistance patterns exist in different regions, and the rate of this resistance is increasing continuously. This pattern is different from region to region due to the geographical disparity, district hygiene level, and the rate of arbitrary administration of antibiotics in different areas. The emersion of resistance to new antibiotics is a matter to be taken seriously, therefore, continuous evaluation of bacteriology, and correct and rapid diagnosis of antibiotic resistance, followed by identifying the correct line of treatment can make a significant contribution to preventing treatment failure, performing quicker treatment and saving time and cost to the patients. By recognition of resistance patterns in each area, we can prevent the resistant gene spread, and help physicians to cure patients more precisely.

The authors of this article would like to extend their gratitude to the medical staff of Gerash Amir-Almomenin Hospital and all patients who have cooperated with us in this study.

Copyright © 2019, Gene, Cell and Tissue. This is an open-access article distributed under the terms of the Creative Commons Attribution-NonCommercial 4.0 International License (http://creativecommons.org/licenses/by-nc/4.0/) which permits copy and redistribute the material just in noncommercial usages, provided the original work is properly cited.
download pdf 971.25 KB Peer Review Comments ( 880.85 KB) Get Permission (article level) Import into EndNote Import into BibTex
Number of Comments: 0