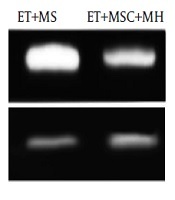 Osteoarthritis (OA) is one of the most common progressive diseases in the joints. A few studies have evaluated the effect of combined endurance training (ET), hyaluronic acid (HA), and mesenchymal stem cells (MSCs) on bone mass.

The present study aimed to examine the effect of ET, HA, and MSCs on osteocalcin (OC) gene expression in cartilage tissues of rats with knee OA.

It seems that a combination of ET, HA, and MSCs has more favorable effects than each one alone on the improvement of OC in cartilage tissues of rats with knee OA.

Osteoarthritis (OA), known as the progressive degenerative disease of the articular cartilage, is one of the most common diseases in the world that increases with aging. The main pathologic causes of OA are cartilage tissue destruction, accompanied by joint space constriction and structural changes in the joints (1). Changes in mechanical and metabolic stress, especially in the subchondral cartilage and bone, can increase pro-inflammatory factors and prevent the formation and repair of the damaged cartilage (2).

Bone remodeling, as a biological process performed by bone marrow cells, can be affected by inflammatory factors and it establishes a bilateral relationship between OA and osteoporosis (2). In other words, increased inflammation following abnormalities in bone metabolism can reduce osteoblast and osteoclast activities. Bone-specific alkaline phosphatase (BAP) and osteocalcin are important markers of bone formation (3). Osteocalcin (OC) is a bone matrix collagen protein produced by osteoblast cells (4). Since OA is recognized as an inflammatory disease in the cartilage, it seems that we can consider the use of mesenchymal stem/stromal cells (MSCs) as anti-inflammatory factors in the treatment of OA (5). The MSCs are known as immune regulators. They are extracted from the bone marrow and, to some extent, from adipose tissue. Any effect on immunity T-cells can convert them to regulatory T-cells to modulate and regulate the expression of inflammatory factors in osteoarthritis (5).

The researchers believe that the osteogenic function of MSCs requires β-glycerol phosphate, ascorbic acid-2-phosphate, and dexamethasone and therapeutic success can be increased by elevating bone resorption biomarkers such as BAP, OC, and adequate calcium deposition in the bone matrix (6). In addition, pro-inflammatory cytokines in the joint and proteases in patients with OA can decrease the levels of hyaluronic acid (HA) as a reducing agent of synovial fluid viscosity, thereby destroying cartilage and impairing joint mechanical hemostasis (7). However, a study by Kawano et al. showed that HA improved the OC levels by blocking the transcriptional pathway of pro-inflammatory cytokines and preventing oxidative stress (8).

Concerning the prevalence of OA in the elderly and its heavy medical costs, the disease has not yet been fully treated (2). Therefore, it can be inferred that the reduced motor ability and inactivity can have more serious complications for OA patients. Thus, using exercises is recommended for the rehabilitation of patients with OA (9). Numerous studies have shown that bone density, bone mass, bone absorption and resorption may improve due to exercises (10). However, studies have reported conflicting results regarding the effect of exercises on OA in middle-aged and elderly people (11, 12).

Although many studies have been performed on the effects of different interventions on the treatment of OA, it seems that the effects of several concurrent interventions to improve and treat OA and bone metabolic markers are not still fully understood. Therefore, the present study aimed to investigate the effect of endurance training (ET), HA, and MSCs on OC in cartilage tissues of rats with knee OA.

In this experimental study, 45 rats (mean age: 40 - 45 weeks; weight: 250 - 300 g) were purchased and transferred to the Animal House of the Islamic Azad University, Sari Branch.

After one week of adaptation to the laboratory environment, 40 rats were induced by OA on the eighth day. We performed OA surgically according to the study by Assis et al. (13). In this method, rats received intra-peritoneal anesthesia with 40 mg/kg ketamine and 20 mg/kg xylazine. The skin around the left knee was shaved, cleaned, and then, a lateral para-patellar incision (about 1 cm) of the skin was carried out. The patella was then dislocated laterally to provide access to the joint space. The Anterior Cruciate Ligament (ACL) was isolated and transected in the flexed knee. The Lachman test confirmed the complete transection of the ligament (13). The incision was sutured and antiseptically treated. All these surgical procedures were conducted in the light phase. Rats were then fed standard food for three weeks and kept in a laboratory environment. Finally, they were divided into eight groups of five rats including (1) control, (2) MSC, (3) HA, (4) ET, (5) HA + MSC, (6) ET + HA, (7) ET + MSC, and (8) ET + MSC + HA. Also, to investigate the effects of OA on OC, the remaining five rats were assigned to the healthy group.

Before the exercise program, rats in the ET groups were made to adapt to a rodent treadmill for one week (three times a week at a speed of 16 m/min at 0% inclination for 10 min per day). Briefly, the training program initiated with a 30-min run on a treadmill without inclination at a speed of 16 m/min in the first week, which gradually reached 50 minutes in the eighth week. Warm-up and cool-down procedures were considered at 5 m/min at the beginning and end of the training.

In the MSC groups, bone marrow-derived MSCs were extracted from healthy male Wistar rats (250 - 300 g) after they were anesthetized with ketamine (30 - 50 mg/kg) and xylazine (3 - 5 mg/kg). Isolated MSCs were cultured in the DMEM medium with 20% FBS incubated overnight to select adherent cells. The cultured medium in the flasks was changed every three days and MSCs were passaged three to four times. After MSCs reached > 90% confluency, they were selected for injection purposes. Rats in the MSC groups received an intra-articular injection of 1 × 106 cells/kg. The MSCs were injected into the right knee joint (14).

The HA groups were treated with a 10 mg/ml intra-articular therapeutic dose of HA. The dose calculated for rats was determined with reference to the human as suggested by Paget and Barnes (1964) (15).

Forty-eight hours after the last training session, all rats were anesthetized with ketamine (30 - 50 mg/kg) and xylazine (3 - 5 mg/kg). Cartilage tissues were isolated and homogenized in phosphate buffer saline (0.01 M; pH 7.0) at 4C with a homogenizer (Hielscher, UP100H).

The RNA was extracted from cartilage tissues using the RNX-Plus Kit (SinaClon; RN7713C). The quantity and quality of the extracted RNAs were determined using a Nanodrop ND-1000 spectrophotometer (Thermo Sci., Newington, NH). The cDNA was synthesized from RNA samples using Revert Aid Reverse Transcriptase (Thermo Sci., Germany) at 42ºC for 1 h with random hexamer primers (Thermo Sci., Germany). A Rotor-Gene 6000 (Corbett Research, Australia) thermocycler and Real Q-PCR 29 Master Mix Kit (Amplicon, Denmark) in 40 cycles were applied for amplification. Each reaction included 5 μL master mix and 100 nM primer. The mRNA levels of OC were normalized relative to the amount of GAPDH mRNA. The sequences of primers are shown in Table 1.

Table 1. Sequence of Primers Used in the Study

The Shapiro-Wilk test was used to examine the normality of data distribution and one-way ANOVA with Tukey’s post hoc test was used to analyze the data by SPSS (version 21) software (P ≤ 0.05).

The results of the present study showed that ET, HA, and MSC had no significant effect on the increase of OC gene expression levels in rats with OA. However, a combination of HA and MSC, a combination of ET and HA, and a combination of ET and MSC significantly increased the OC gene expression levels. Besides, a combination of ET, HA, and MSC had more favorable effects than other interventions on the increase of OC gene expression levels. As a carboxy-glutamic acid-γ-bone protein, OC plays a key role in bone tissue metabolism. This protein is secreted only from osteoblasts and has chronic effects on mineralization and bone density (16). Exercises seem to regulate estrogen and testosterone, leading to bone growth, as well as metabolic factors such as BMPs; they also increase Wnt/β-catenin pathway proteins, VEGF, bone matrix metalloproteinases (MMPs), and fibroblast growth factors (FGFs) and at the same time, inhibit pro-inflammatory cytokines such as IL-1, IL-6, and TNF-α. This pathway further increases the expression levels of PERK, eIF2α, and ATF4, leading to the activation of mTORC2, Akt, GSK3β, or PI3K/Akt/GSK-3β/β-catenin pathway. The most important mechanism of exercise is to increase osteoblasts activity and the storage of calcium and osteocalcin in the bone matrix (17). However, exercise intensity and duration are factors that can affect OC so that 12 weeks of endurance training significantly increased OC in elderly women with osteoporosis (18). On the other hand, endurance training with 55% - 65% of the maximum heart rate reserve did not have a significant effect on OC in elderly women with osteoporosis (19); however, endurance training with 75% of the maximum heart rate reserve increased the OC levels (19). Hyaluronic acid enhances synovial fluid fluidity and contributes to bone cell metabolism regulation by increasing the expression of proteins such as growth factors, type I collagen, type V collagen, fibronectin, and calcitonin (20).

Concerning the effect of HA on bone metabolism, researchers noted that treatment with HA could increase bone density and the number of bone cells (20). The results of the mentioned study are inconsistent with those of the present study. The differences in HA treatment, its duration, and methods of administration are the reasons why these studies are inconsistent. In addition, MSCs could increase the expression of CD105, CD90, and CD44 and increase ascorbic acid levels, bone mass, osteoblasts, and density of bone cells through increasing the protein levels in tissue metabolism and enhancing the expression and regulation of Ca2+ oscillations (21). However, the effect of MSCs on OC was not significant in the present study.

The present study showed that a combination of HA and MSCs significantly increased the OC gene expression levels as compared to the control group. The favorable effects of HA on bone cells may be due to its ability to increase synovial membrane fluidity and bone growth factors and decrease inflammation (20, 22) and the favorable effects of MSCs may be due to their ability to increase bone growth factors (21, 23). In this regard, MSCs with a high percentage of HA had a significant effect on the increased bone density, decreased inflammation, and bone growth factors in patients with knee OA (24).

The most important finding of the present study was that combining ET with either of these interventions (HA and MSCs) had better effects on the increase of OC. Given that ET encompasses a wide range of OC signaling pathways (17, 22), the interaction of each of these interventions could have more favorable effects on OC. In spite of much research, no study was found to investigate the interactive effect of ET, MSCs, and HA on OC; thus, there were limitations in comparing the results of the present study and other studies. Considering the effect of OC on bone density, the lack of examination of bone density and bone mass was a limitation of the present study. Therefore, it is proposed to investigate these factors in future studies. Another limitation of the present study was the absence of a sham group. Therefore, it is proposed to use a sham group along with other groups in future studies.

According to the results of the present study, ET along with the administration of HA and MSCs seems to have more protective effects against OC than the use of each one alone in cartilage tissues of rats with knee OA.

Copyright © 2019, Gene, Cell and Tissue. This is an open-access article distributed under the terms of the Creative Commons Attribution-NonCommercial 4.0 International License (http://creativecommons.org/licenses/by-nc/4.0/) which permits copy and redistribute the material just in noncommercial usages, provided the original work is properly cited.
download pdf 177.34 KB Peer Review Comments ( 107.55 KB) Get Permission (article level) Import into EndNote Import into BibTex
Number of Comments: 0