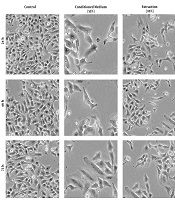 Cervical cancer is one of the most common cancers of women in the world, which causes high mortality. The human umbilical cord Wharton's jelly stem cells (hWJSCs) can inhibit various cancer cells.

Recently, many therapeutic approaches have been developed for the treatment of cervical cancer. However, its treatment remains an important challenge. Inhibition of cancer cells through the induction of apoptosis is an important therapeutic approach in the treatment of various cancers (4, 5). Cervical cancer is associated with uncontrolled cell proliferation and overexpression of anti-apoptotic genes. The bcl-2 gene family is one of the most important factors in the apoptosis pathway of cervical cancer cells (6). The BAX and BCL-2 genes are the most important genes in the bcl-2 gene family, which induce and inhibit apoptosis, respectively (7).

The evidence has shown that mesenchymal stem cells (MSCs) inhibit cancer cells through the induction of apoptosis pathway (8). Therapeutic effects of MSCs are generally mediated by various secreted cytokines, growth factors, and extracellular matrix proteins (9, 10). Human Wharton jelly stem cells (hWJSCs) are derived from the embryonic cord (which normally discarded at birth), and thus have embryonic and mesenchymal stem cell characteristics (11). The umbilical cord is surrounded by a mucoid connective tissue, which called Wharton jelly. Recently, few studies have reported the anti-proliferative and inhibitory effects of hWJSCs on cancer cells (12, 13).

3.1. Isolation and Culture of hWJSCs

Ten samples of umbilical cords were collected from pregnant women referred to Tabriz International Obstetrics Hospital, Iran. All participants were informed about the study and signed a consent form in accordance with the Declaration of Helsinki ethical standards (IR.IAU.TABRIZ.REC.1398.028). The obtained umbilical cord was transferred to Cell and Tissue Culture Laboratory of Tabriz branch, Islamic Azad University, in a Hanks' balanced salt solution (HBSS) supplemented with penicillin-streptomycin antibiotics. The Wharton jelly tissues were isolated using explant culture, and complete Dulbecco's modified eagle medium (DMEM) supplemented with 10% fetal bovine serum (FBS) and 1% penicillin-streptomycin antibiotic at 37°C with 96% humidity and 5% CO2.

3.2. Preparation of Conditioned Medium from hWJSCs

The hWJSCs were cultured in DMEM medium (containing penicillin-streptomycin antibiotics without FBS) in standard condition for 72 hours, up to cell density of approximately 70% - 80%. Finally, the supernatant was collected and sterilized by a 0.22 μm filter and stored at -20°C.

The hWJSCs were cultured in DMEM medium (containing penicillin-streptomycin antibiotics without FBS) in standard condition for 72 hours, up to cell density of approximately 70% - 80%. The cultured cells were washed using phosphate buffer saline (PBS), and the RIPA lysis buffer and protease inhibitor were added. The cell suspension was centrifuged and the obtained supernatant was collected as cellular extraction and stored at -20°C.

The Hela cancer cell line was seeded (200 × 103 cells/well) in a 6-well plate and incubated at 37°C and 5% CO2 for 24, 48, and 72 hours. The culture medium was replaced with complete medium containing different concentrations of conditioned medium (55%) and cellular extraction (10%) and incubated in a standard condition for 24, 48, and 72 hours. The morphological alterations were monitored using an inverted light microscopy.

The RNA extraction was performed using TRIzol agent (Gibco, USA), according to the manufacturer's instructions. The quantity and quality evaluation of extracted RNA was performed using Nanodrop instrument (Thermo Fisher, USA) and electrophoresis on 1% agarose gel, respectively. The cDNA synthesis was performed using a specific cDNA synthesis kit (Yekta Tajhiz, Iran) and random hexamers. The expression of apoptosis-related BAX and BCL-2 genes were evaluated using real-time PCR. The sequence and specification of the used primers are presented in Table 1. The PCR reaction was performed in a 10 μL total volume, include 1 μL cDNA, 5 μL Master Mix, 0.5 μL forward primer, 0.5 μL reverse primer, and 3 μL deionized distilled water. Also, the PCR condition was included 1 cycle initial denaturation for 60 seconds at 94°C, 40 cycles denaturation for 20 seconds at 94°C, 40 cycles annealing for 30 seconds at 54°C, and 40 cycles extension for 30 seconds at 72°C. The β-actin (ACTB) housekeeping gene was considered exogenous control. The calculations were performed by 2-ΔΔCt (Livak) formula. The viability of Hela cancer cells treated with different concentrations of the extract (A) and conditioned medium (B) of Wharton jelly stem cells. Expression of BAX and BCL-2 genes (A) and BAX/BCL-2 ratio (B) in Hela cancer cells treated with different concentrations of the extract and conditioned medium of Wharton jelly stem cells.

Apoptosis suppression is one of the important pathological processes of cervical cancer (14). The BCL-2 gene is an apoptotic inhibitor gene (15). Also, the BAX gene promotes apoptosis and its expression is reduced in cervical cancer (16). Therefore, regulation and control of the expression of BAX and BCL-2 genes are important in patients with cervical cancer. Cell therapy is one of the most important and applied methods in cancer treatment (17). The use of stem cells is a novel method in cell therapy. Recently, the Mesenchymal stem cells (MSCs), included hWJSCs, has been extensively studied due to its high division and differentiation (18).

To date, several MSCs-derived conditioned media and extract were studied on many cancer cells. The MSCs secrete a number of paracrine factors, cytokines, and vascular endothelial growth factor (VEGF), which may influence the proliferation and viability of cancer cells. In this regard, MSCs secretome may affect tumor cells and inhibit their development (19). The hWJSCs have been used as an anticancer agent in many previous studies (20, 21). These stem cells can be separated without pain and cost from human umbilical cord, which was usually discarded after delivery. The hWJSCs are also multipotent with high proliferative potential and long telomeres, which can present embryonic and mesenchymal stem cell characteristics (22). In contrast to other mesenchymal stem cells, the hWJSCs do not cause tumor formation in mice with suppressed immune systems (23). However, the effect of these stem cells has not been studied on cervical cancer.

Our study showed that the conditioned medium and extraction of hWJSCs cause to inhibit the growth, proliferation and metabolic activities of cervical cancer cells in a concentration- and time-dependent manner. This can be due to cellular damage induced by conditioned medium and extraction of hWJSCs. Recent studies reported many morphological alterations in various cancer cells treated with MSCs, which cause cell death (24, 25). In a study by Kalamegam et al. reported that extraction of hWJSCs cause to cellular damage, upregulation of caspase-3 gene expression, and regulation of cell cycle-related genes, and thus cause to inhibition of cellular growth, proliferation, and apoptosis in ovarian cancer cells (21). In another study by Han et al. also reported that mesenchymal stem cells derived from human cord cause to inhibition of cellular growth and proliferation in prostate cancer cells (26).

According to the present study, conditioned medium and extraction of hWJSCs significantly increased BAX gene expression in Hela cancer cells; whereas the expression of BCL-2 gene was significantly decreased. The BAX and BCL-2 genes are the most important genes involved in apoptosis (27). The BAX gene product induces apoptosis; whereas the BCL-2 gene product inhibits apoptosis (28). Therefore, many studies have been conducted to regulate the expression of BAX and BCL-2 genes, as well as other genes involved in the apoptosis process, to induce the death of various cancer cells (29, 30). Han et al. reported that the MSCs derived from human umbilical cord induce JNK signaling pathway and also inhibit PI3K/AKT signaling pathway, which induces apoptosis in prostate cancer cells (26). Moreover, Gauthaman et al. reported that extraction of hWJSCs in 50% concentration increased BAX gene expression and decreased the expression of BCL-2 and SURVIVIN genes in breast cancer cells (24). In another study, Gauthaman et al. reported that the extraction of hWJSCs increased BAX gene expression and decreased BCL-2 and SURVIVIN gene expression, and thus induces apoptosis and cancer cell death in mice with prostate cancer (25). Therefore, our results are similar to the results of the mentioned studies, and confirm anti-cancer activity of hWJSCs by inducing apoptosis. However, further studies on animal models and clinical studies are essential to achieve accurate results.

Copyright © 2020, Gene, Cell and Tissue. This is an open-access article distributed under the terms of the Creative Commons Attribution-NonCommercial 4.0 International License (http://creativecommons.org/licenses/by-nc/4.0/) which permits copy and redistribute the material just in noncommercial usages, provided the original work is properly cited.
download pdf 2.81 MB Peer Review Comments ( 216.44 KB) Get Permission (article level) Import into EndNote Import into BibTex
Number of Comments: 0