In this study, we examined the effects of exposure to WiFi wireless frequency (2.4 GHz) on histopathological changes in the cardiovascular system of rats.

The experimental groups included 32 adult male rats divided into control (not exposed to heat and WiFi), WiFi (exposed to 2.45 GHz for 52 consecutive days (2 h/day)), heat (water bath of 43°C for 52 consecutive days (10 min/day)), and heat+WiFi groups (exposed to 2.45 GHz then water bath of 43°C). On the 52nd day, the heart was removed, and its total volume and weight were determined using stereological techniques. The number of cardiomyocytes nuclei and the volume of the myocardium were determined. Blood samples were collected to measure reduced glutathione (GSH) content, Total Antioxidant Capacity (TAC), and malondialdehyde level (MDA). Data were analyzed by ANOVA, Kruskal-Wallis, and Mann-Whitney U tests.

This study indicated that RFW might cause structural changes and oxidative stress in the heart. Also, exposure to radiofrequency decreased total antioxidant activity in heart tissue with histological changes, including myocardium hypertrophy and decreased number of myocytes.

Exposure to WiFi has rapidly increased due to the increasing number of wireless devices. Microwaves were introduced as an eventual carcinogen in 2011 by the International Agency for Research on Cancer (IARC). Despite that, the health effects of MW exposure concerning cancer or other diseases remain disputed (1). Radiofrequency radiation, a non-ionizing part of the Electromagnetic Field (EMR) ranging from 300 MHz to 300 GHz, has made communication possible between billions of wireless users worldwide (2-4). There is an increase in the use of WiFi operation at 2.45 GHz by local networks at home, work, and hotspots (3). The evolution of this technology has been accompanied by great concern regarding its biological effect on human health, specifically Radiofrequency Field (RF) exposure (5, 6). These effects were mainly related to WiFi heating, which could produce various molecular transformation types (7).

Several publications reported the adverse health effects of EMR, including cancer, leukemia, brain tumors, immune system deregulation, immunologic perturbation, blood-brain barrier defects, neurological effects, and some cardiovascular effects (8, 9). The EMR changes the energy level of electrons and increases the activity, half-life, and concentration of Reactive Oxygen Species (ROS) (10). The mechanism for the increased ROS generation is the depletion rate of ATP synthesis, the generation of proteolytic enzymes, DNA damage, and cardiac remodeling, leading to hypertrophic signaling, necrosis, and apoptosis (11, 12). The researcher reviewed the epidemiological studies with the general conclusion that exposure to EMR could directly (non-thermal) or indirectly (thermal) alter the cardiovascular system (13). Recently, studies have shown that the MDA levels were significantly higher in WiFi-exposed (2.4 GHz) rats than in controls (14).

For this purpose, we evaluated and compared the effects of heat, WiFi radiation, and WiFi-heat exposure on the cardiovascular system of rats.

In this study, we selected 32 male Sprague-Dawley rats weighing 210 - 240 g. All animal procedures were carried out per the standard rules established by the University Animal Care and Ethics Committee. The rats were first randomly divided into four groups: group I: rats not exposed to heat or WiFi, group II: rats exposed to WiFi at 2.45 GHz for 52 consecutive days (2 h/day), group III: rats exposed to heat in a water bath at 43°C for 52 consecutive days (10 min/day), group IV: rats exposed to WiFi at 2.45 GHz and then a water bath at 43°C (14).

For stereological evaluation, the heart was removed, and the primary volume of the heart "V (Heart)" was measured using the immersion method according to the Scherle method (1970). The degree of shrinkage "d (shr)" was determined based on the Cavalieri principle. Estimating "d (shr)" and tubule length requires isotropic random slices. These slices were based on the "orientator method." Ultimately, 8 - 12 slices were collected from each heart. Then, the slices and circular pieces were processed, sectioned (4 and 25 µm thicknesses), and stained with Hematoxylin-Eosin (Figure 1). 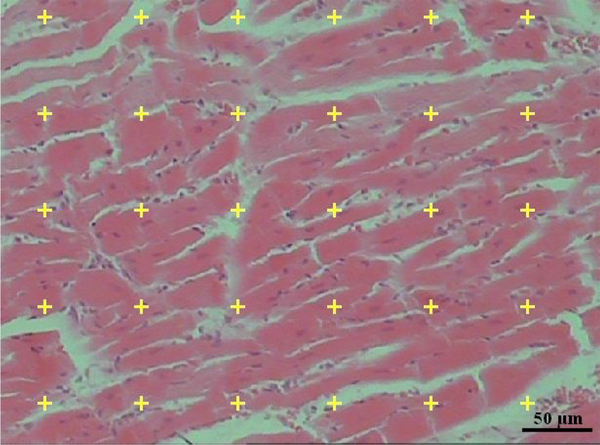 where AA and AB represent the area of the circular piece after and before processing and staining, respectively. Sections were analyzed using a video microscopy system. In doing so, the microscopic fields were sampled using a systematic random sampling procedure. Then, the stereological test grids (point grid and unbiased counting frame) were superimposed on the microscopic images on a monitor utilizing the stereology software designed at the university (Figure 1).

The heart's primary volume and the myocardium's volume were determined based on the Cavalieri method. The volume was obtained using the following formula:

where "ΣP" is the points on the surface of the heart, "(a/p)" is the area relative to each point, and "T" is the thickness of the slice.

The mean heart shrinkage was determined by:

The final volume was obtained using the following formula:

3.3.2. Estimation of the Numerical Density of Cardiomyocytes Nuclei

"h": The height of the dissector 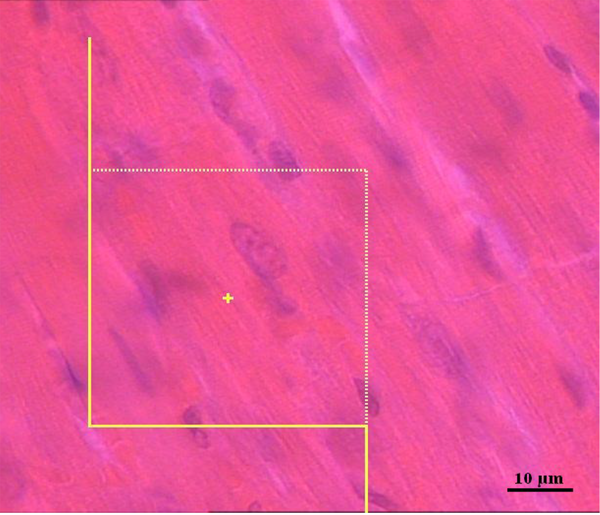 The dissector method for numerical density of cardiomyocytes nuclei

The MDA levels in heart tissue were determined by the reaction of thiobarbituric acid with lipid peroxidation breakdown products as described previously by Devrim et al. (15). First, 0.5 mL tissue samples were added to 2 mL thiobarbituric acid. Then, the mixture was placed at 95°C for one hour in a Ben Marie and then for 15 min in ice, centrifuged for about 10 min at 4000 rpm; then, butanol pyridine (15:1, V/V) (1 mL) was added. After centrifugation, the supernatant was measured spectrophotometrically at 535 nm. The malondialdehyde concentration in micro-molar was obtained from the standard curve prepared with 1 and 3 tetraethoxypropane.

The TAC levels were measured by the FRAP assay described by Benzie and Strain (16) with slight changes. In this method, the colorless Fe3+ of ferric tripyridyltriazine (Fe3+-TPTZ) complex was reduced to the ferrous ion (Fe2+). At low pH, this reduction forms an instance blue color with a maximum absorbance of 593 nm. The working FRAP reagent included (A): 10 mM TPTZ in 40 mM HCl and (B) Acetate buffer solution: 300 mM (pH 3.6). First, A and B reagents were mixed; then, a 100 µL sample was added to the working FRAP reagent, and a spectrophotometer determined the color absorbance at 593 nm.

The reduced glutathione content in the tissue was spectrophotometrically measured using the procedure described by Gaitanaki et al. (17). In general, to determine GSH content, the protein supernatants were mixed with sodium phosphate buffer 0.02 M and DTNB (5,5′-Dithiobis-2-nitrobenzoic acid) 10 mM. They stayed for 2 min at room temperature. After five minutes, the absorbance was determined against a non-homogenized blanch.

Data were analyzed with Mann-Whitney U, Kruskal Wallis, and ANOVA tests. 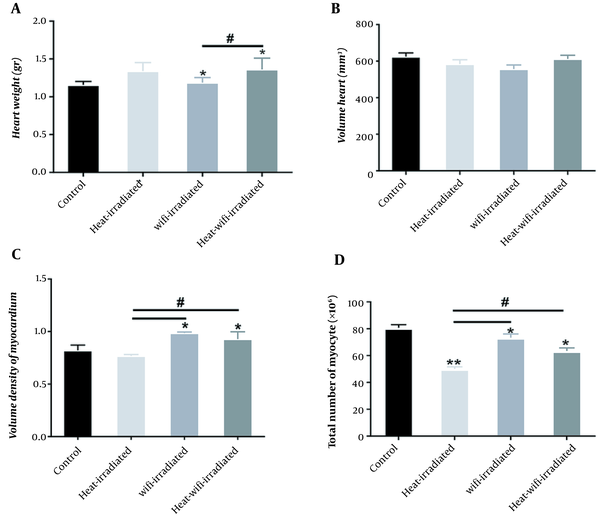 There were no significant differences in the heart volume between all the groups (Figure 3B).

4.3. Volume Density of the Myocardium 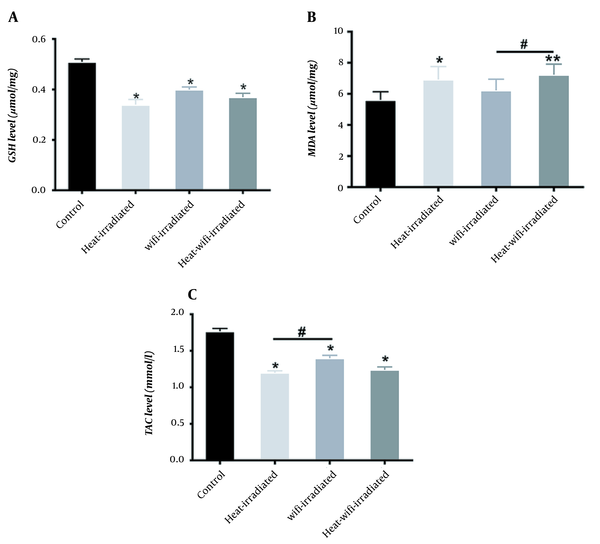 The current study evaluated oxidant-antioxidant status and the structural changes of the heart in WiFi and heat-exposed animal models using experimental and stereological techniques. The results showed that the effects of RFR on oxidant-antioxidant status in rat hearts induced oxidative stress with increased lipid peroxidation and decreased glutathione concentration and total antioxidant capacity. The results showed a statistically significant difference in the levels of GSH and TAC between WiFi -irradiated and heat-WiFi-irradiated groups and the control group. These findings align with the results of Turker et al. (14), showing that antioxidant activity in rat hearts decreased after exposure to radiofrequency radiation. In one study, exposure to 40 Hz for two weeks did not significantly change GSH and TAC. By contrast, two-month exposure to the same frequency decreased GSH and TAC levels. They concluded that the effect of EMF exposure on antioxidant capacity in the heart is related to exposure duration (18).

An increase in the MDA concentration was reported in the heart tissues of male rats exposed to WIFI radiation for one hour for 28 days (14). Previous studies by Devrim et al. (15) and Ozguner et al. (16) reported that lipid peroxidation increased in a 900 MHz exposed group compared to the control group. The inconsistency between our study and other studies could be due to different exposure parameters. The current study showed a significant difference in the MDA level between the heat-irradiated and control groups. Gaitanaki et al. (17) reported that hyperthermia stimulates lipid peroxidation by cellular disorders. Malondialdehyde is a lipid peroxidation product that causes ROS-dependent tissue damage (19).

The heart weight significantly increased in the heat-WiFi-irradiated and WiFi-irradiated groups compared to the control group, suggesting hypertrophic changes. In an exciting study, Mohamed et al. (20) reported that whole heart weight was increased in rats exposed to cell phone EMF, particularly in groups exposed to EMF for longer. The results showed that heart weight did not change significantly in the heat-irradiated group compared to the control group. In another study, heat severely damaged the heart tissue. This study demonstrated that chronic heat stress caused right atrium and ventricular hypertrophy. The reason for these different results might be exposure duration in our study.

The present study showed that the total heart volume did not significantly differ between WiFi-irradiated and control groups. In a stereological study, Monsefi et al. (21) reported that short time exposure to low-intensity EMF causes blood supply growth of heart muscle, but animals exposed to the same condition for a longer time adapted to EMF. The last findings of structural changes in the heart determined the volume density of the myocardium and the total number of myocyte nuclei. Previous studies showed an increased percentage of apoptotic cells and congestion of blood vessels without apparent affection of cardiac myocyte, which was inconsistent with our findings (22, 23). Previous studies determined that ROS activates many signaling kinases of hypertrophy and apoptosis factors. Low levels of ROS are essential for kinase regulation signal and protein modulation; however, higher levels of ROS induce apoptosis (23). The study showed a reduction in the total number of myocyte nuclei after exposure to heat. The study by Kwiecien et al. (24) reported the histological alterations in the heart tissue after exposure to 45°C temperature. Lushnikova et al. (25) reported that high temperature decreased the total number of myocytes and concluded that myocyte reduction was probably related to the apoptosis process. The most important things are understanding the risks of using power transmission devices in the workplace and how to deal with them, designing different solutions for the necessary preparations, and maintaining the physical health of people due to injuries with different WiFi frequencies. We suggest conducting necessary studies to reduce the environmental impacts when transmitting the waves of different wavelengths by relevant centers to reduce the potential harm to different age groups in society.

Copyright © 2022, Author(s). This is an open-access article distributed under the terms of the Creative Commons Attribution-NonCommercial 4.0 International License (http://creativecommons.org/licenses/by-nc/4.0/) which permits copy and redistribute the material just in noncommercial usages, provided the original work is properly cited.
download pdf 9.06 MB Get Permission (article level) Import into EndNote Import into BibTex
Number of Comments: 0