Sleep hygiene habits are essential to maintaining a healthy lifestyle. Sleep deprivation is a prevalent problem worldwide. Multiple studies have shown a high prevalence of sleep insufficiency among medical students due to high academic load, caffeine intake, and high-stress levels.

This cross-sectional study was conducted on medical students of all academic years at Alfaisal University, Riyadh. Two popular surveys – the PSQI and K10 - were used to assess sleep quality and psychological distress, respectively. In addition, the survey contained questions on socio-demographics and academic performance. Sociodemographic characteristics were assessed across groups having poor and good sleep quality. In multivariate analysis, we employed conscious variable selection to develop models. All statistical tests were two-sided at P < 0.05 as statistically significant.

Sleep is a bodily and mental state in which sensory receptivity is lowered, postural muscles are relaxed, and awareness is effectively halted. Sleep hygiene habits are essential to maintaining a healthy lifestyle. According to the National Sleep Foundation, adults are encouraged to sleep seven to nine hours every night (1). Poor sleep habits include sleeping for less than seven hours a night or more than nine hours a night. In both cases, the risk of mortality and morbidity increases (2). Sleep deprivation is a prevalent problem worldwide. Approximately one-third of Saudi adults report short sleep time (2). Sleep insufficiency is even common among medical students due to high academic load, high-stress levels, excessive caffeine intake, and smoking (3). Healthy sleeping habits play a critical role in medical students' academic performance and contribute to their overall psychological and physical well-being.

A cross-sectional study among medical students in India found that 17.3% of the students had abnormal levels of daytime sleepiness. The study showed that sleep difficulties among medical students led to irritability and affected lifestyle and interpersonal relationships (3). Another cohort study among 4,175 youths in the Houston metropolitan area revealed that the reduced quantity of sleep increases the risk of major depression, which increases the risk of decreased sleep (7). Moreover, a local study in Saudi Arabia among 2,095 adults found that 33.8% reported a sleep duration of fewer than 7 hours per night and that females were more likely to have shorter sleep duration than males (2).

This cross-sectional study was conducted among medical students at Alfaisal University, Riyadh. Alfaisal University College of Medicine offers a six-year Bachelor of Medicine, Bachelor of Surgery (MBBS) program, with years 1 - 3 as pre-clerkship years, years 4 and 5 as clerkship years, and year 6 as an internship. Some students are enrolled in the University Preparatory Program (UPP) prior to medical school and hence attend a total of 7 years to graduate. However, not all UPP students are offered admission to medical school. The Cumulative Grade Point Average (CGPA) is out of 4.0, and a CGPA of > 3.75 is considered academic distinction.

The total number of undergraduate medical students at Alfaisal University from all levels (years 1 - 6) was approximately 1400 students. With a 95% confidence level and a 5% margin of error, the required sample size was 302 participants. The survey was also validated in content by two experts in the field. The authors also piloted the survey among 10 medical students to ensure validity and reliability. No significant changes were reported, and the 10 students were excluded from the main study.

An online survey using JotForm ® was distributed to all Alfaisal medical students in years 1 - 6. Convenience sampling was adopted, and surveys were circulated to the target population via email and social media accounts (WhatsApp, LinkedIn, and Facebook). Students in the UPP program were excluded from this study. The study objectives were explained to the participants, and their consent was obtained prior to participation. Data were auto collected into JotForm ® Sheets and stored privately with access restricted to the authors only. No identification information, such as names or emails, was collected to limit bias in the data collection process. Participation was voluntary, and participants could withdraw at any time by quitting the survey. All questions in the online survey were mandatory. This study was performed upon approval from the Institutional Review Board (IRB) at Alfaisal University. All methods were performed per the relevant IRB guidelines and regulations.

The Pittsburgh Sleep Quality Index (PSQI) is a validated questionnaire with 19 self-rated questions with a score range of 0 to 3. A score of 0 indicates no trouble, while a score of 3 indicates severe trouble. The sum of these scores in a specific way generates seven composite scores under the categories subjective sleep quality, sleep latency, sleep duration, habitual sleep efficiency, sleep disturbances, use of sleep medication, and daytime dysfunction. The seven components' scores are then summed up again to obtain a final score ranging from 0 to 21. A score of 0 suggests no difficulty in any component, while a score of 21 suggests severe difficulty in all components (10).

The sociodemographic characteristics were compared between the groups having good sleep quality (PSQI < 5) and poor sleep quality (PSQI > 5) using the chi-squared test, Fisher's exact test, and Student's t-test, where appropriate. Purposeful variable selection was used for model building in multivariate analyses, and backward elimination was used to retain all variables with P < 0.3. Only significant predictors were included in the multivariate model. The ANCOVA test examined the association between sleep quality, academic performance, and psychological distress. Assumptions of homogeneity of variance and dependent variable normality were assessed. Cronbach's alpha test was used to test reliability and consistency and ensure we obtained meaningful data from the questionnaires (α = 0.81). All statistical tests were two-sided, and the results were considered statistically significant at P < 0.05. All analyses were conducted using SAS statistical software version 9.4 (SAS Institute Inc. Cary, NC).

A total of 241 medical students participated in the study from academic years 1 - 6. All participants provided complete data, and there were no missing data. 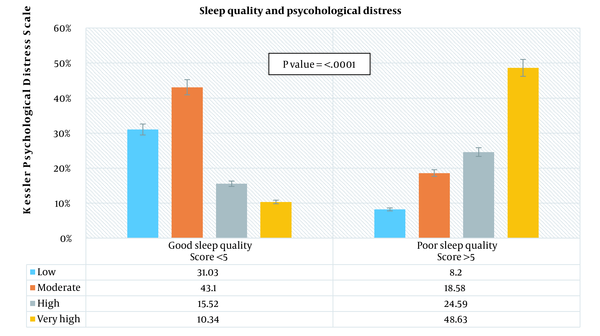 Our results showed a significant positive linear relationship between Kessler's Psychological Distress score and the PSQI scores. The highest psychological distress was reported among respondents with poor sleep quality (48.63%). Supporting results from a cross-sectional study conducted by Zhang et al. among young adults (n = 10,123) in the United States illustrated a significant association between sleep patterns and psychological problems (15). Their study showed that early sleeping correlated with a lower suicide rate while sleeping late, having a short nighttime duration, delaying bedtime on weekends, or having weekend oversleeps linked to mood disorders, anxiety, alcohol and drug use, smoking, and behavioral disorders (15). Another cross-sectional study conducted by Nuqali et al. among Saudi medical students (n = 219) in Makkah, Saudi Arabia, showed that psychological distress is most prominent among males, and less depressed students had higher GPAs. In addition, psychological distress was mainly reported among students with poor sleep quality (16). Another local cross-sectional study conducted by Alotaibi et al. among medical students in their preclinical years (n = 282) at a Saudi medical college found that Student's sleep quality was poor and their stress levels were high, with these two factors being substantially related (17). Another study conducted by Milojevich et al. on the effects of insomnia on mental health showed similar results where individuals with insomnia were more likely to experience somatic complaints, obsessive-compulsive disorder (OCD), depression, anxiety, and psychiatric distress. The study was conducted on undergraduate students (n = 69) and showed that a decrease in sleep quality was associated with increased anxiety and somatization disorder, but not depression (18). In addition, a longitudinal study in Hong Kong/Macau that sampled Chinese students (aged 18 - 25; n = 930) asserted a bi-directional linkage between sleep and mood. The study demonstrated that quality and quantity of sleep are crucial to optimal brain activity and regulating human emotions (19). Furthermore, another cross-sectional study on medical students in Saudi Arabia found that sleep deprivation harmed academic performance (78.8%) and mood (78.4%) (20). Besides, Abdulghani et al. 2021 concluded that getting 6 - 10 hours of sleep per day was associated with normal Epworth Sleepiness Scale (ESS) scores (P = 0.019) and academic grades ≥ 3.75. Also, students with abnormal ESS scores had lower academic achievement, which indicates a significant relationship between abnormal ESS scores, total sleeping hours, and academic performance (21). On the contrary, a prospective cohort study (n = 102) conducted by Dendle et al. among first-year clinical students (eq. year 3 medical students) at a tertiary hospital-based medical school in Melbourne, Australia, discovered no correlation between students' psychological distress and academic outcomes (11).

5.4. Limitations of the Study

The study's cross-sectional nature limits causal inferences, and the relatively small sample size limits generalizability. It is also important to note that the sample was taken from one geographical region and a specific type of population, ie, medical students, and the results may not very well be generalized to the adult population or public in Saudi Arabia. In addition, there is a possibility of recall bias. The findings of this study may serve as preliminary work for further research on the topic.

The sleep quality among medical students is poor, which is associated with psychological distress and poor academic performance. Sufficient sleep is critical for medical students' general health and psychological well-being. Students' sleep-wake cycles are disrupted by sleep disorders, irregular sleep habits such as increased screen time prior to sleeping, heavy academic responsibilities, and busy schedules, all contributing to poor sleep quality. It is highly suggested that the awareness of sleep hygiene with healthy sleep habits be campaigned among medical students. Besides, the role of academic mentors is essential in helping their mentees construct and follow a defined sleep schedule while balancing their academic responsibilities and reducing unnecessary screen time. Furthermore, discussion with program directors and coordinators to lower the academic load when indicated is also strongly advised.

The authors are grateful to all students who participated in this study.

Copyright © 2022, Author(s). This is an open-access article distributed under the terms of the Creative Commons Attribution-NonCommercial 4.0 International License (http://creativecommons.org/licenses/by-nc/4.0/) which permits copy and redistribute the material just in noncommercial usages, provided the original work is properly cited.
download pdf 149.22 KB Get Permission (article level) Import into EndNote Import into BibTex
Number of Comments: 0