Normal Value of Random Urinary Calcium to Creatinine Ratio in Children in Zahedan, South-East of Iran

Random urine calcium/creatinine ratio (UCa/Cr) is used practically for the screening of hypercalciuria.

This study aimed to determine the age-specific reference value of UCa/Cr and its relationship with urinary Na/K in children in Zahedan, South-East of Iran.

Idiopathic hypercalciuria is a common disorder in children, with a range of clinical presentations such as hematuria (1), dysuria, urinary tract infection (2, 3), voiding dysfunction, flank, and abdominal pain. It is the most metabolic factor in children with urolithiasis, presenting in half of such abnormalities. Urine calcium excretion is dependent on region and ethnicity (4). Therefore, the prevalence of hypercalciuria varies in different countries. For instance, it was reported as 0.6% in Japanese children (5) and 38.6% in Kazakh children (6). Similar results have presented various results in different parts of Iran, ranging from 0.11% in Urmia and North of Iran (7) to 5.1% in Jahrom (8).

Physiologic hypercalciuria is related to dietary excess of sodium, calcium, or protein. There is a direct correlation between the UCa/Cr and UNa/K ratios in hypercalciuric patients.

This study aimed to set the normal values of random UCa/Cr by age, sex, and ethnicity and determine the relationship between UCa/Cr and UNa/K in healthy primary school children in Zahedan city, South-East of Iran.

This cross-sectional study was performed in the city of Zahedan, South-East of Iran, during 2010 and 2011. Non-fasting, second-morning urine samples were collected from 1,506 children aged 7-12 years randomly selected from primary schools.

Boy and girl schools were listed separately based on the geographical location, and five schools were selected systematically from each list. Next, children were randomly selected within the schools. Parents of children were invited to obtain information regarding clinical symptoms through questionnaire interviews. Children who were on medications and those with chronic illness and kidney disease were excluded from the study. The study was approved by the Ethics Committee of Zahedan University of Medical Sciences. Non-fasting urine specimens were taken between 9 and 11 a.m. Random urine samples were collected and sent immediately to the laboratory. Urine calcium and creatinine were measured by the cresolphthalein complex one spectrophotometric and Jaffe reaction, respectively. Sodium and potassium were measured using an ion-selective electrode.

Suspected hypercalciuria was defined as a UCa/Cr ratio of higher than or equal to 0.21 mg/mg. Percentile values of UCa/Cr and UNa/K ratios were calculated for each age group. Quantitative variables were summarized as mean ± SD, and odds ratios were used to determine the association between demographic variables and hypercalciuria. Data analysis was performed using SPSS version 15, and the significance level was 0.05. 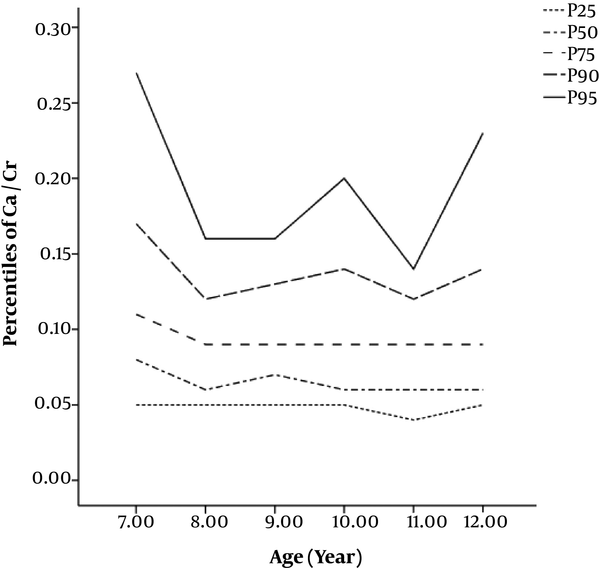 The mean UNa/UK was 2.90 ± 1.89. All percentiles had a similar flat trend by age, except for the 95th percentile with a U-shape trend (Figure 2). The frequency of UNa/UK more than or equal to one was significantly higher in males and Baluch children than in females and other ethnic groups, respectively (Table 3). 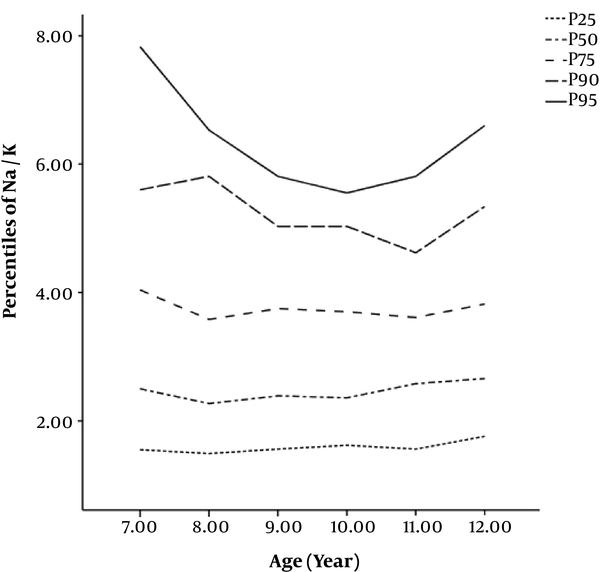 The percentile values of UCa/Cr ratio for each age group are shown in Figure 1. The 95th percentile of UCa/Cr was 0.27 at seven-years-old, whereas it was 0.22 in 12-year-old children. The data showed a strong inverse relationship between UCa/Cr and age, the youngest children demonstrating the highest UCa/Cr.

Table 4. Correlation Between UCa/Cr and UNa/k Based on Gender and Age

Hypercalciuria is a common pediatric problem known to be associated with many complaints. The prevalence of hypercalciuria was reported as low as 0.6% in Japanese children (5) and as high as 38.6% in Kazakh children (6). Even in the same country (Iran), the hypercalciuria prevalence varies with regions so that it was estimated at 3.0%, 5.7%, 13.8%, and 34.2% in Ahvaz (9), Jahrom (8), Rasht (10), and Kashan (11), respectively. In the present study, the prevalence of hypercalciuria was 3.1%, which is close to that in Ahvaz (3%) (9). Many factors including dietary habits, mineral composition of water, geographic location, genetic factors, and race may explain these differences. Although 24-h urine calcium measurement is the gold standard to diagnose hypercalciuria, urine collection is difficult, especially in young children. The urinary Ca/Cr ratio is a useful and reliable method for determining hypercalciuria in children. In some populations, 0.21 mg/mg or 95th percentile has been taken as a cutoff value for hypercalciuria, and in some others, 4 mg/kg daily urinary calcium excretion is used. In this study, UCa/Cr ≥ 0.21 and the 95th percentile of UCa/Cr were taken as cutoff values. Mean urinary Ca/Cr was 0.21 ± 0.18 and the 95th percentile of UCa/Cr was 0.27 in seven-year-old children whereas it was 0.22 in 12-year-old children. Thus, our results show that the reference value of UCa/Cr ratio ≥ 0.21 as the upper limit of normal was below the 95th percentile. Similarly, in some studies, the 95th percentile value of spot urine Ca/Cr for each age group was higher than 0.21 (Table 5).

A decreasing trend of urinary calcium excretion by age has been reported. In a study, the 95th percentile value of UCa/Cr was 0.37 in children aged seven years and 0.21 in 13-14 years, which is similar to the results of the current study (14). Another study determined a cutoff value of 0.7 for Kazalinsk (Kazakhstan) and the highest level was for children aged 7-8 years (6). In Thailand (12), the 95th percentile of urine Ca/Cr in children younger than six months was 0.75, with a decreasing trend by age. A possible explanation of these findings could be the influence of sex hormones stimulated at puberty on calcium homeostasis. In this study, the mean and prevalence of UCa/Cr ratio were not significantly different between male and female children, which are in line with the reports by Nikibakhsh et al. (16) and Kaneko et al. (6). Caucasian children had a higher Ca/Cr ratio than African-Americans in all age groups (13). However, no significant difference was detected in ethnic groups in this study (Baluch and Sistani). This may be due to similarities in dietary habits and geographic conditions of the study population. In this study, hypercalciuria was significantly higher in overweight and obese children. Emamghorashi et al. (8) showed that the mean weight was significantly lower in hypercalciuric children than in others (P = 0.02), which may be related to nutritional habits. Many studies showed an association between a high UNa/UK ratio and increased risk of urolithiasis (4). We also found a positive correlation between UCa/Cr and UNa/UK, especially in seven-year-old children (r=0.5, P < 0.001). There was no statistically significant correlation between UCa/Cr and UNa/UK ratios in older children, which is in line with the results reported by Koyun et al. (14). However, in some studies (13, 16), a weak correlation between these two parameters was reported. So et al. (13) found an extremely weak correlation between UCa/Cr and UNa/UK in healthy children whereas UNa/UK was positively and strongly correlated with age (P < 0.001), and UCa/Cr was negatively correlated. The authors concluded that the linear relationship between UNa/K and age could be due to the change in nutritional habits as children consume higher salt content meals when they grew up. In Japan, a positive correlation between UCa/Cr and UNa/Cr was found (r = 0.14, P < 0.01) (5). In healthy Thai children, the urinary sodium/creatinine ratio (UNa/Cr) and urinary sodium/potassium ratio (UNa/K) were correlated with UCa/Cr (r=0.41, P < 0.0001 and r=0.24, P < 0.0001, respectively) in contrast to the urinary potassium/creatinine ratio (UK/Cr) (r=0.05, P > 0.1). Children with high UCa/Cr ratios also had higher UNa/Cr (5.6 ± 7.1 vs. 2.6 ± 1.5, P < 0.001) and UNa/K (5.4 ± 2.3 vs. 2.5 ± 0.23, P < 0.05) (12). Increased potassium intake in hypercalciuric children had beneficial effects on the UCa/Cr ratio, especially in children treated with nephrolithiasis (5).

This study was supported by a grant from Zahedan University of Medical sciences. The authors would like to appreciate the children's parents for their collaboration.