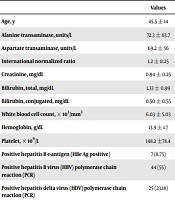 Characteristics of Hepatitis B and D Co-infection: A Descriptive Study

About 5% of cases with chronic hepatitis B virus (HBV) are co-infected with hepatitis D virus (HDV), and this co-infection possesses a high risk for hepatocellular carcinoma (HCC) and cirrhosis. We aimed to evaluate the epidemiological and histopathological characteristics ‎and response to treatment in patients with HBV and HDV co-infection in a hepatitis clinic in Tehran, Iran. In this study, 80 patients were enrolled and evaluated for age, sex, degree of liver fibrosis, virologic status, and response rate. The incidence of co-infection of hepatitis B and D was 4.9% (80/1,631 HBV-infected cases) in our clinic. Thirty-seven (46.25%) patients had liver cirrhosis, and four (5%) patients had HCC. Besides, HDV Ribonucleic Acid (RNA) polymerase chain reaction (PCR) was positive for 31 (38.75 %) patients. Among 30 patients, 14 (46.6%) completed interferon therapy (for equal to or more than 48 weeks) and had a response with undetectable HDV RNA PCR after treatment. According to our results, for cirrhotic patients in HBV/HDV co-infection that was about 46%, it seems that the early detection of HDV antibody (Ab) plays a significant role in the prevention of progressive liver failure, and treatment with interferon can help these patients by improving the prognosis.

Hepatitis D virus (HDV) is a defective, single-stranded ribonucleic acid (RNA) virus that depends on the supply of hepatitis B surface antigen (HBsAg) for its assembly and transmission. The HDV superinfection with chronic hepatitis B can lead to different clinical manifestations in patients (1). About 10.58% of chronic hepatitis B virus (HBV) patients are co-infected with HDV (2, 3), meaning that around 62 - 72 million people are HDV carriers worldwide (4). However, in different geographical regions, the prevalence of HDV infection varies significantly (5).

We aimed to evaluate the epidemiological and histopathological characteristics and response to treatment in patients with HBV and HDV concurrent infection in a hepatitis clinic in Tehran.

In this retrospective observational cross-sectional study, patients with hepatitis B and D co-infection were referred from 2004 to 2018 to the hepatitis clinic of Imam Khomeini Hospital, Tehran, Iran. The inclusion criteria were the confirmation of chronic hepatitis B infection based on positive HBsAg for more than six months and hepatitis D simultaneously with the serologic method (total IgM and IgG antibodies). The exclusion criteria were infection with human immunodeficiency virus (HIV), presence of alcoholic, autoimmune, and drug-induced hepatitis, lack of serological evidence to determine the hepatitis B infection, and loss of data to make the analysis possible.

The gathered data included demographic and laboratory data, as well as the degree of liver fibrosis, virologic status, and response rate. Demographic characteristics including age, gender, year of birth, date of diagnosis of hepatitis B infection, date of treatment onset, and history of hepatitis D infection were registered. Laboratory data were collected based on evidence of liver cirrhosis. The degree of liver fibrosis was confirmed by pathologic findings in a liver biopsy defined by the METAVIR score or Fibroscan. The virologic status was determined using the molecular method of polymerase chain reaction (PCR) with the COBAS TaqMan method (Roche) whose lower limit of detection for COBAS TaqMan was 6 IU/mL. Interferon-α (PEG INF-α 180 microgram once a week injection) was prescribed for all patients with positive HDV viral load or undetectable HDV and HBV with significant fibrosis. Finally, response to treatment within 48 weeks of the initiation of treatment based on the reduction of hepatitis D virus loading was evaluated by using the PCR molecular method at the end of treatment. Nonresponding patients were defined by a reduction in the HDV PCR viral load by less than one logarithm.

Following the Declaration of Helsinki, written informed consent was obtained from all participants before the initiation of the study. The study protocol was approved by the institutional review board of Tehran University of Medical Sciences.

Because of the normal distribution of data, an independent t-test was used to assess the means differences. The chi-square and Fisher exact tests were used to assess the statistical relationships between categorical variables. The level of significance was set at a P-value < 0.05 for all analyses.

Thirty (37.50%) patients were treated with interferon, among whom, in eight (26.66%) patients, treatment was switched to oral tenofovir. Also, 29 patients received only oral agents for the treatment of chronic hepatitis B. Besides, 14 (14/30, 46.66%) patients completed interferon therapy (for at least 48 weeks) and had a response with undetectable HDV RNA PCR after treatment, and none of them were cirrhotic. Moreover, 16 (16/30, 53.33%) patients had the disruption of interferon after 3 - 6 months because of following reasons. Five (5/30, 16.66%) patients had no response to treatment. Four (4/30, 13.33%) patients experienced the complications of interferon (neutropenia, a rise in liver enzymes, myalgia, decompensated cirrhosis). Seven patients (7/30, 23.33%) did not come to the clinic to continue treatment.

Seven (8.75%) patients had co-infection with hepatitis C virus (HCV); two of them received special treatment, and five had undetectable HCV PCR. Four patients had a cirrhotic liver. There was no significant correlation between hepatic cirrhosis and HBV DNA viral load (P-value 0.429). However, there was a significant correlation between liver cirrhosis and HDV RNA viral load (P-value: 0.009).

There are few studies on HBV and HDV clinical manifestations, treatment, associated factors, lab data, prognosis, and factors effective in the disease process. Miao et al. (11) conducted a meta-analysis with a random-effects model to evaluate the global prevalence, disease progression, and clinical outcomes of hepatitis delta virus infection. They reported a global prevalence of HDV infection to be 0.80% in the general population and 13.02% in the carriers of hepatitis B virus surface antigen (HBsAg). Also, this study reported a high prevalence of HDV infection among HBV-HCV co-infected people (11). In the current study, we reported the incidence of co-infection with hepatitis B and D to be 4.9% (80/1,631 HBV-infected cases) in our clinic, which seems to be less than the rate in this meta-analysis. Seven of our patients had HCV and HBV co-infection. The rate of HDV co-infection is variable in different settings. For example, this rate was 1.5% in Malawi (12), 23.1% in Romania (13), and 43% in Egypt (14).

As known, 10% to 15% of patients with HBV progress to cirrhosis within two years; the rate is 70% to 80% within 5 to 10 years (15). In our study, the prevalence of liver cirrhosis was 46.25%, which is a significant rate of cirrhosis in these patients. Meanwhile, HDV in different individuals may show different disease courses from mild to severely progressive (16). Our study revealed a maximum of 62 KP and a minimum of 6 KP in patients’ Fibroscan, with different stages of progression. This result was similar to the liver biopsy in our patients. Our study revealed that the prevalence of HCC in patients with HBV and HDV infection was 8.75%. Makhlouf et al. (14), in their study in Egypt, reported 8.8% of patients with HCC, and another study showed that the rate of HCC in hepatitis B and D co-infection is almost three times the rate among HBV mono-infection (17). In the Miao et al. (11) meta-analysis, the odds ratios for co-infected patients for being asymptomatic, having a diagnosis of cirrhosis, or having HCC or mortality were 0.12 (95% CI: 0.06 - 0.21), 3.90 (95% CI: 2.94 - 5.18), and 1.97 (95% CI: 1.02 - 3.78), respectively.

The HDV RNA PCR was positive in 38.75% of the patients in our research while it was 16.4% in a study in Romania (13) and 31.3% in Egypt (14). We could not find a significant correlation between hepatic cirrhosis and HBV DNA viral load; however, there was an association between liver cirrhosis and HDV RNA viral load. Therefore, patients with positive HDV RNA are more susceptible to cirrhosis than patients with undetectable HDV RNA. It was demonstrated that persistent HDV replication is associated with cirrhosis development (18).

In our research, 37.5% (n = 30) of the patients were treated with interferon; 14 (14/30, 46.6%) patients completed interferon therapy (for at least 48 weeks) and showed response with undetectable HDV RNA PCR after treatment, but none of them had a cirrhotic liver. The virological response is seen in no more than 50% of the patients (16); in our center, the response was about 50%. However, it should be mentioned that seven (7/30, 23.33%) patients did not come to the clinic to continue treatment. Also, our study revealed that treatment with interferon and response to it can save the liver from failure.

The limitation of our study was the lack of exact follow-up information of patients after treatment and that all patients were chronic HBV and HDV patients, and we could not determine co-infection or super-infection of HDV. Besides, the way of disease transmission was indeterminate.

The HBV and HDV co-infected is the most important infection among types of viral hepatitis, and if diagnosed with delay, it can result in liver failure and malignancy. According to our results regarding cirrhotic patients with HBV/HDV co-infection with a rate of about 46%, it seems that the early detection of HDV Ab has a significant role in the prevention of progressive liver failure, and treatment with interferon can help these patients to have a good prognosis.