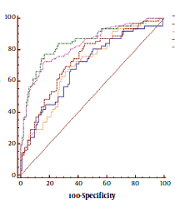 Information on the following parameters were obtained from 165 patients with HBV: liver stiffness measurement (LSM), serum GP73 level, and some other fibrosis criteria approved for clinical practice. The area under the curve (AUC) and sensitivity and specificity of GP73 were compared with LSM, aminotransferase-to-platelet ratio index (APRI), and 4-factor based fibrosis index (FIB-4) for diagnosing significant fibrosis.

This study demonstrated that GP73 can be considered as a new effective biomarker for diagnosing liver fibrosis. The accuracy of significant fibrosis detection in patients with HBV infection can be improved by the new algorithm that contains GP73 and LSM.

Accurate diagnostic assessment is a key step in the clinical management of liver fibrosis and preventing long-term consequences. Besides, it can provide valuable information to decide whether the antiviral treatment should be administrated in patients infected with chronic hepatitis B virus (HBV) or not. Significant fibrosis is a key criterion for diagnosing liver cirrhosis during the development of chronic HBV infection. According to the national Chinese guidelines, serum HBV DNA in patients with significant fibrosis (F ≥ 2) is a major indication for antiviral treatment of patients with chronic hepatitis B (CHB) virus infection (1, 2). Therefore, accurate diagnosis of significant hepatic fibrosis is key for making therapeutic decisions.

There are semi-quantitative scoring systems for organizing liver biopsy in clinical practices, including Metavir or Ishak, which are the gold standard for evaluating the degree of hepatic fibrosis. Regarding the post-procedure complications and invasive nature of the liver biopsy, its application in clinical practice is limited (3). Besides, because of the sampling bias and the variability of intra/inter-observer in liver biopsy, the cirrhosis and fibrosis of the liver may be neglected or underestimated (4). Given the drawbacks of liver biopsy, researchers are interested in developing and investigating non-invasive methods that combine several biochemical parameters to assess fibrosis stages, and progress has been achieved, such as the aspartate aminotransferase-to-platelet ratio index (APRI), the 4-factor based fibrosis index (FIB-4), and Fibro Test.

Recently, as a rapid and reproducible method, named liver stiffness measurement (LSM), assessed by transient elastography, has been introduced by guidelines on managing chronic HBV and HCV infections, based on its non-invasive merit in detecting liver fibrosis (5). It worth noting that several confounding factors (e.g., age, alanine aminotransferase (ALT), body mass index (BMI), and the interpretation of LSM values) may affect the final diagnosis (6-9). Several algorithms are proposed to increase the diagnostic accuracy in patients with significant fibrosis by improving LSM in combination with other serum biomarkers (10-13).

Golgi membrane glycoprotein 73 (GP73), a type II Golgi transmembrane protein (14), is reported as a promising serum biomarker for the primary diagnosis of hepatocellular carcinoma (HCC). Subsequent studies reported that patients with chronic liver disease have increased levels of serum GP73, which also causes inflammation, liver fibrosis, and other liver disease progression. Evidence provided during the last decade support the feasibility of GP73 serum level as an effective biomarker for diagnosing significant fibrosis and cirrhosis in patients with chronic liver disease (15). In the study by Cao et al., serum GP73 has been proposed as an accurate and promising marker for significant fibrosis detection in patients with CHB (16). However, future studies are needed to extend our knowledge about the diagnostic accuracy of serum GP73 in diagnosing significant fibrosis in patients with CHB.

All adult patients with CHB who received percutaneous liver biopsy at West China hospital from June 2017 to October 2018 were included in the present study. Before including patients, they were systematically examined by clinicians against the following inclusion criteria: 1- aged between 18 - 65 years; 2- presence of serum HBsAg (≥ 6 months); and 3- confirmed diagnosis of fibrosis according to histological assessment and availability of the results, and not receiving anti-HBV treatment. The exclusion criteria were as follows: 1- chronic liver diseases associated with other infections, including HCV, HDV, or HIV co-infection; 2- alcohol consumption (≥ 40 g/day); 3- other liver diseases, such as nonalcoholic steatohepatitis, primary biliary cirrhosis, autoimmune hepatitis, decompensated liver cirrhosis, and drug-induced hepatitis. The recruitment progress is shown in Figure 1. 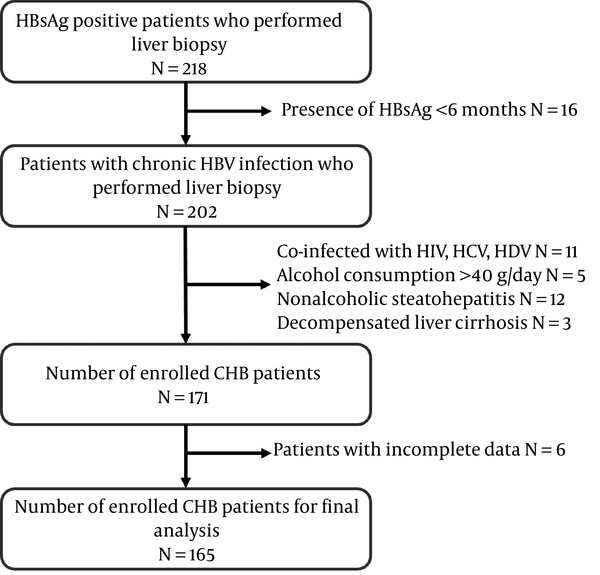 Eighteen CHB patients undergoing a 4-years NA treatment were included. FibroScan was performed at the entry and the 4th year. Of 18 patients who were receiving NA treatment, 2 were receiving a single oral daily dose of 600 mg telbivudine (LDT), and the other 16 were receiving 10 mg adefovir dipivoxil (ADV) in addition to daily LDT. The inclusion and exclusion criteria were the same as before.

The liver biopsy and LSM were performed one month prior to being enrolled in the present study, and blood samples were collected for lab tests 15 days after registration. All examinations were performed before HBV management. All patients were explained about the process of the study and signed an official informed consent before participating. The West China hospital ethics committee approved the current study, and all processes were conducted according to the Declaration of Helsinki 1975 and its subsequent amendments.

FIB-4 and APRI valued were calculated using the following formula (17, 18):

Fibroscan (FS) was used to perform LSM, as described previously. To calculate the median value for each patient, at least 10 valid measurements were considered. Measurements with a rate of success ≤ of 60% or an interquartile range ≤ of 30% were considered failures and therefore excluded. The median LSM value obtained by two independent operators was calculated and recorded in kilopascal (kPa).

The 16-G needle (1620; Bard, Murray Hill, United States) was used to perform the percutaneous liver biopsy. Liver diseases specialized pathologists, who were blinded to all other clinical information, performed the liver histology assessments. The specimen (≥ 15 mm) containing no less than 6 portal tracts was considered satisfactory. The METAVIR scoring system was used to perform the semi-quantitative evaluation of liver fibrosis according to the criteria.

Data were analyzed using SPSS V17.0 (Chicago, United States) and MedCalc. Mann-Whitney test or student t-test was used for continuous variables comparison. MedCalc statistical software was used to perform the DeLong test for diagnostic performance evaluation and the areas under the receiver operating characteristic (ROC) curves were calculated. An optimal cut-off value was assessed according to the maximized Youden’s index. Diagnostic accuracy was assessed according to specificity, sensitivity, the area under the curve (AUC), and Youden’s index. All statistical results were obtained two-sided. Statistical significance was considered when P-Value < 0.05.

Table 1. Clinical Characteristics of Patients in Each Stage of Fibrosis a

4.2. Role of GP73 for Significant Fibrosis Prediction in CHB Patients 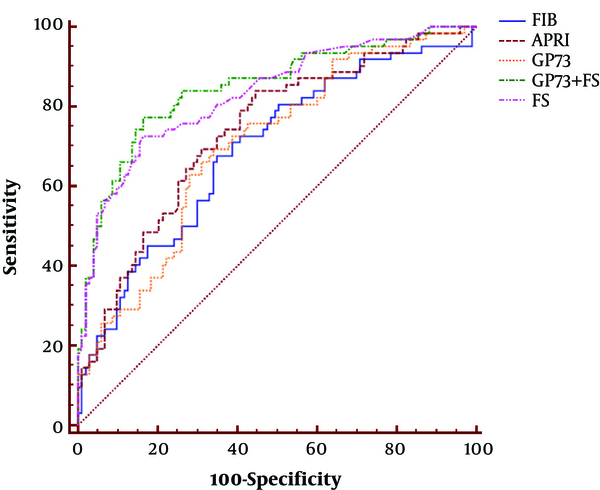 By modeling the values of the serum GP73 and LSM, an algorithm in the combination of the two variables was constructed to predict significant fibrosis, using the following formula:

4.4. Longitudinal GP73 and LSM Values 4 Years After the Start of Nucleoside Analog Treatment

In the present study, an algorithm superior to LSM was developed, consisting of GP73 and LSM, in order to cover up the shortage of using LSM alone, which resulted in a practical model for predicting the incidence of significant fibrosis in CHB patients. By using easy to access factors of GP73 and LSM and having a simple formulation, the GP73-LSM based algorithm can be considered as a feasible clinical option. The modified algorithm in combination with serum GP73 and LSM can improve the accuracy of single LSM in detecting significant fibrosis in CHB patients. Hence, it can be suggested as a more accurate way to identify the antiviral treatments, which would have a brilliant prospect in future clinical practice.

We recommend performing a longitudinal study to evaluate the ability of the GP73-LSM algorithm in monitoring dynamic changes of the fibrosis stage. We observed that the GP73-LSM algorithm was statistically improved after a 4- year NAs treatment, which is coincident with the trends of LSM. Despite having some limitations, including a relatively small sample size, significant GP73-LSM algorithm changes were detected over different time points in the present study. However, both GP73 and the predictive model based on GP73 and LSM are useful in monitoring liver fibrosis during NAs treatment.

Serum GP73 can be detected by standard protocol with a commercially available ELISA kit. It costs approximately 8 USD for a single test of serum GP73 level in China, and it worth paying additional costs of an extra ELISA test considering the accuracy improvement of significant fibrosis prediction in CHB patients. Compared to the single LSM measurement, the combination of LSM and GP73 is more feasible, applicable, and cost-effective. Therefore, serum GP73 application is of great potential in clinical practice, especially in developing countries with limited non-invasive approaches.

Attention should also be paid to the limitations of the present study. Whether GP73 can be used as a fibrosis marker in other liver diseases still needs to be proven. In liver fibrosis caused by fatty liver disease, HCV infection, or other reasons, further investigations to detecting the feasibility of regarding GP73 as a biomarker are needed. The sensitivity and specificity to regard GP73 as a biomarker of liver fibrosis caused by other etiologies are yet to be detected. Besides, because of the relatively small number of HCC patients and healthy volunteers in this study, the predictive value of GP73 for HCC occurrence in CHB patients was limited.

In conclusion, this study demonstrated that GP73 can be regarded as a new biomarker to diagnose liver fibrosis effectively. Combining GP73 and LSM improved the accuracy of significant fibrosis detection in HBV infected patients. Further studies over longer periods with a larger size of populations will highly recommend examining the feasibility of GP73 as a biomarker to detect liver fibrosis caused by other etiologies.