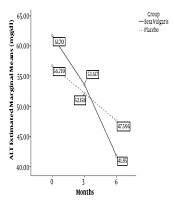 The prevalence of non-alcoholic fatty liver disease (NAFLD) has increased in recent decades. There are some concerns about the efficacy and side effects of drugs used for the treatment of NAFLD.

Therefore, new treatment methods and modalities are needed. This study aimed to determine the efficacy of Beta vulgaris extract in the treatment of NAFLD.

This is a double-blind, parallel-group, randomized clinical trial. This clinical trial was conducted from November 2018 to April 2019 in Shahid Beheshti Hospital of Kashan, Iran. Among 143 NAFLD patients who met the inclusion criteria, 120 patients agreed to participate in the study. Subsequently, they were divided into two equal groups via simple randomization. The Beta vulgaris group received Beta vulgaris extract, alongside standard NAFLD treatment, including vitamin E and Silybum marianum extract (Livergol). The placebo group received standard NAFLD treatment, as well as a placebo instead of Beta vulgaris extract. The levels of aspartate transaminase (AST), alanine transaminase (ALT), alkaline phosphatase (ALP), fasting blood sugar (FBS), low-density lipoprotein (LDL), and high-density lipoprotein (HDL) were evaluated and compared between the groups. Variables were measured at the beginning of the study and after three and six months.

Integration of Beta vulgaris extract in the standard treatment of NAFLD could significantly improve AST, ALP, FBS, LDL, and HDL. This study also revealed that the effect of Beta vulgaris on ALT increased over time.

Non-alcoholic fatty liver disease (NAFLD) is the most common cause of chronic liver disease around the world (1). The prevalence of NAFLD has increased in the past two decades, and the Middle East and South American countries account for the highest prevalence of NAFLD (2). NAFLD is also the second leading cause of liver transplant and the third leading cause of hepatocellular carcinoma (3, 4). The potential of NAFLD to progress to advanced fibrosis, cirrhosis, and hepatocellular carcinoma makes it a formidable disease with high morbidity and mortality. Moreover, NAFLD is highly associated with some metabolic comorbidities, including type II diabetes mellitus, hyperlipidemia, obesity, and metabolic syndrome (5, 6). Therefore, some effective treatment methods are needed to treat patients in the early stages of the disease and prevent its progression into end-stage liver disease.

Currently, there is no standard pharmacological drug for the treatment of NAFLD. Management of some metabolic comorbidities, including obesity, type II diabetes mellitus, and hyperlipidemia, is the main goal of NAFLD treatment (7). Some agents, which are used for the treatment of NAFLD, include insulin-sensitizing agents (pioglitazone), hypolipidemic agents (gemfibrozil), and antioxidants (vitamin E) (8). However, these agents are not broadly recommended due to their adverse effects and unapproved effectiveness in NAFLD (9, 10). Furthermore, promising results have been reported in NAFLD treatment by using pentoxifylline and obeticholic acid. However, the safety and side effects of these agents are not well-established (11-13). Consequently, it seems necessary to find effective agents with minimum side effects.

Therefore, the objective of this study was to determine the efficacy of Beta vulgaris extract in the treatment of NAFLD.

This study was approved by the Ethics Committee of Tehran University of Medical Sciences (TUMS) (code: IR.TUMS.PSRC.REC.1396.4044). It was also registered in the Iranian Registry of Clinical Trials (code: IRCT20121017011145N20). The identity and information of the participants remained confidential. Moreover, informed consent was obtained from eligible volunteers prior to participation in the study. All of the participants could withdraw from the study at any time.

This double-blind, parallel-group, randomized clinical trial was conducted from November 2018 to April 2019 at Shahid Beheshti Hospital of Kashan, Iran. This hospital is a referral teaching hospital, affiliated to Kashan University of Medical Sciences (KUMS).

This study was conducted among patients with NAFLD who were referred from specialized outpatient clinics of KUMS. The participants were selected by purposive sampling based on eligibility criteria. The inclusion criteria for patients were age between 18 and 70 years and a primary diagnosis of NAFLD. The diagnostic criteria for NAFLD included ultrasound evidence of fatty liver (grade II or above) and increased level of liver enzymes (two or three times higher than normal). Ultrasonography was performed by an expert radiologist, and the diagnosis was established by a gastroenterologist. The grade of fatty liver was determined according to the Rumack ultrasound criteria, and the liver biochemical profile was measured based on standard protocols (14).

On the other hand, patients with liver diseases, including Wilson’s disease, hemochromatosis, alcoholic fatty liver disease, autoimmune liver disease, or cirrhosis, were excluded from the study. Also, pregnant and lactating women were excluded. Finally, eligible participants were divided equally into case and control groups via simple randomization. For the randomization, the groups were named as Beta vulgaris group and placebo group. Then, the sequence of groups was drawn up by coin tossing. The Beta vulgaris group received vitamin E pearl (300 IU/twice daily), Livergol tablet (140 mg/daily), and Beta vulgaris capsule (400 mg/daily) for six months. On the other hand, the placebo group received the same dosages of vitamin E pearl and Livergol tablet, besides placebo capsules instead of Beta vulgaris capsules for the same amount of time. Also, the participants were asked to do not use Beta vulgaris or its products during the study. The probable intervention complications were followed up closely via telephone contacts. In the first two weeks, three participants of the Beta vulgaris group had mild gastrointestinal symptoms, including diarrhea and nausea. Also, one participant of the placebo group had moderate diarrhea in the first week of intervention, who was excluded from the study.

The demographic and anthropometric characteristics of the participants, including gender, age, weight, height, family history of NAFLD, and history of diet and exercise, were determined at baseline. In addition, the levels of AST, ALT, ALP, prothrombin time (PT), triglyceride (TG), cholesterol (CHL), high-density lipoprotein (HDL), low-density lipoprotein (LDL), fasting blood sugar (FBS), and albumin (ALB), as well as the grade of fatty liver, were measured at baseline and three and six months after the intervention.

About 70 kg of Beta vulgaris root (common beet) was purchased and confirmed by a botanist. Next, the roots were cleaned and extracted according to the maceration technique using 70% ethanol by a specialist in the Medicinal Plants Laboratory of Tehran Faculty of Pharmacy, Tehran, Iran. The extracted liquid was concentrated by a rotary evaporator and dried by a spray dryer. Subsequently, 400 mg of the dried extract of Beta vulgaris root was added to a capsule with the same color and size as the placebo capsule. In addition, microbial experiments were carried out on Beta vulgaris extracts to find any possible contamination with pathogens, such as Escherichia coli, Salmonella, and Bacillus cereus.

Chi-square test was used to evaluate qualitative variables. Independent samples t-test and one-way analysis of variance (ANOVA) were also used to determine differences between the mean values of the groups. The therapeutic effects of Beta vulgaris were evaluated using repeated measures analysis. Before analysis, the model pre-assumptions, including normality and sphericity, were examined using histograms, box plots, and Mauchly’s tests. All the statistical analyses were conducted in SPSS version 23, and the level of significance was set at 0.05.

Among the 143 patients who met the study criteria, 120 patients agreed to participate in the study (83.9% response rate). However, two patients from the placebo group left the study due to gastrointestinal side effects (e.g., vomiting and diarrhea). In addition, one patient from the placebo group was excluded from the analysis due to unusual values. The study flowchart is presented in Figure 1. Overall, 62 (52%) patients were male, and 55 (48%) patients were female. The mean (SD) age of the participants was 46.9 (9.7) years, ranging from 18 to 69 years. Other sociodemographic characteristics are shown in Table 1. 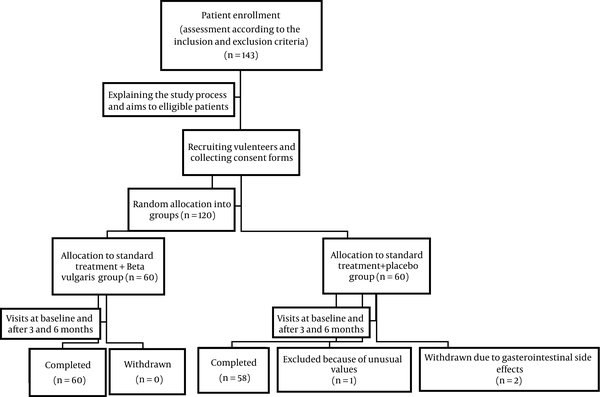 Table 1. Descriptive Analysis of Demographic Characteristics and Other Variables in the Study Groupsa

Table 2. Biochemical Characteristics of the Beta vulgaris and Placebo Groupsa, b

Table 3. Descriptive Analysis of Biomarkers During the Studya

AST and ALT changes over time

The present study showed that the use of Beta vulgaris, alongside the standard treatment of NAFLD, could have positive effects on the biochemical markers of patients with NAFLD. Integration of Beta vulgaris in the treatment regimen of NAFLD patients significantly decreased AST and ALP as the main biomarkers of hepatic disease, compared to the standard treatment. Since elevated AST is associated with higher grades of fibrosis among NAFLD patients (17), improvement of AST is a promising way to prevent the progression of liver fibrosis. Although Beta vulgaris extract could not have significant effects on ALT in this study, the interaction between time and groups revealed that the effect of Beta vulgaris on ALT increased over time. It is recommended that future studies evaluate the effect of Beta vulgaris on ALT for more than six months.

Furthermore, Beta vulgaris extract had significant positive effects on other biomarkers, including FBS, LDL, and HDL. Since the treatment of comorbidities, such as diabetes mellitus, obesity, and hyperlipidemia, is one of the goals of NAFLD treatment, Beta vulgaris extract can improve the efficacy of other agents prescribed for NAFLD. To gain a clinical insight into the effect of Beta vulgaris, Cohen’s d index was calculated using the Klauer’s approach (0.3 for AST and 0.6 for ALT). According to the Cohen’s table, the effect size of Beta vulgaris was small for AST and medium for ALT. Therefore, despite the significant P value of AST, its effect size was small, while despite the non-significant P value of ALT, it was more significantly affected from a clinical point of view.

In another study evaluating the hepatoprotective effects of Beta vulgaris on liver damage in male Sprague-Dawley rats, it was found that Beta vulgaris juice exerted hepatoprotective effects on liver damage in a dose-dependent manner (19). This finding supports our hypothesis about the discrepancy between our results and the study by Srivastava and colleagues. Moreover, Ozsoy-Sacan et al. (20) in their study, which assessed the effect of Beta vulgaris extract on the liver of diabetic rats, found that AST, ALT, ALP, total lipid profile, and blood glucose level decreased significantly in the intervention group, compared to the placebo group. Additionally, the anti-hyperglycemic and anti-lipidemic activities of Beta vulgaris have been confirmed in different studies (21-23). Therefore, the positive effects of Beta vulgaris extract on the glycemic status and lipid profile of patients with NAFLD can help physicians manage other comorbidities of NAFLD and improve the outcomes of treatment.

Despite our findings, this study had two limitations. First, the FibroScan, as one the best noninvasive tests to quantify liver fibrosis, has not been used in this study due to economic considerations. Second, this study was performed for six months due to time limitations. According to our findings, it is recommended that future studies try to find the effect of Beta vulgaris consumption on NAFLD for more than six months.