Prevalence of Syphilitic Hepatitis Among HIV-Infected Patients in Istanbul, Turkey, a Region with an Increasing Incidence of Syphilis and HIV Infection 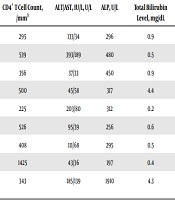 Syphilis is a global health issue, which continues to occur at high rates worldwide, particularly in HIV-infected men, who have sex with men (MSM). Hepatitis can present as an uncommon manifestation of syphilis, and the diagnosis may be overlooked in favor of more common causes of liver injury in this group.

This study aimed to determine the prevalence and risk factors of syphilitic hepatitis among HIV-infected individuals diagnosed with acute syphilis.

This cross-sectional study was conducted on HIV-infected individuals who regularly attended a tertiary clinic in Istanbul. The data were collected and analyzed between 2016 and 2019. Cases of syphilitic hepatitis were included according to the following criteria: (I) VDRL-confirmed Treponema pallidum infection after or simultaneously diagnosed with HIV infection; (II) elevated liver enzymes, including ALT, AST, and ALP, that resolved after penicillin treatment; and (III) exclusion of other causes of hepatitis. Sociodemographic characteristics of the participants, clinical and laboratory findings were evaluated using medical records.

Among 1,057 HIV-infected patients, 141 (13.3%) were diagnosed to have an early stage of syphilis, 138 of them were male. Nine (6.4 %) out of 141 patients had syphilitic hepatitis, and all of them were self-identified MSM. Moreover, 5 out of these 9 patients were simultaneously diagnosed with syphilis and HIV infection. Up to 10-fold increase in ALT/AST was noted in all of them, and a 3.5-fold increase in bilirubin was observed in two cases. The most prominent laboratory abnormalities in syphilitic hepatitis patients were the detection of a considerable increase in ALP and HIV RNA levels.

Syphilitic hepatitis is not encountered rarely in HIV-infected individuals, predominantly MSM populations. Since HIV/syphilis coinfected patients are more infective as a result of higher HIV RNA levels, early diagnosis, and treatment are crucial.

Syphilis is an ulcerative sexually transmitted disease that has similar modes of transmission with human immunodeficiency virus (HIV) infection. Infection with one agent may enhance the acquisition and transmission of the other; therefore, all syphilitic patients should be offered HIV testing and vice versa. Syphilis is a global health issue, which continues to occur at high rates worldwide, particularly in HIV-infected individuals, especially among men who have sex with men (MSM) (1, 2). The rise in syphilis incidence among MSM was attributed to diminished concerns about the risk of transmitting HIV as a result of optimism regarding antiretroviral therapy (ART) and facilitate communication by the Internet (3). As the report of UNAIDS (The Joint United Nations Programme on HIV and AIDS), the annual number of new HIV infections globally continued to decline gradually in 2018 (4). Contrary to this decline, new HIV infections in Turkey have increased 4.5 times since 2014, 22,000 HIV-infected individuals have been diagnosed in 81 million population until the end of 2019 (5). Moreover, an approximately three-fold increase in syphilis has been observed (1.1/100,000 people to 3.1/100,000 people) in our country in recent three years (6).

Treponema pallidum, the etiologic agent of syphilis, affects every organ in the human body, which tends to be more aggressive in HIV-infected individuals (7, 8). Hepatitis can present as an uncommon manifestation of syphilis. In daily clinical practice, physicians may fail to examine syphilis as a potential cause of hepatic inflammation. It is also difficult to estimate the exact prevalence of hepatitis among patients with syphilis.

The incidence of syphilitic liver involvement is difficult to assess in HIV-infected individuals because of multiple confounders such as viral hepatitis, opportunistic infections, fatty liver disease, alcoholism, hepatotoxic drugs, and neoplasms (9). Few reports on the prevalence of syphilitic hepatitis among HIV-infected individuals are available.

The aim of this study was to determine the prevalence and risk factors of syphilitic hepatitis among HIV-infected individuals diagnosed with acute syphilis in a tertiary clinic in the city of Istanbul. Istanbul is located in the North-western part of Turkey and is the most populated and cosmopolitan city in Turkey, with more than 16 million population.

This cross-sectional study was conducted on HIV-infected individuals who regularly attended a tertiary clinic. The patients’ medical data were recorded, and these data were reviewed from January 2016 to November 2019. Evaluation of the HIV-infected individuals at initial and subsequent visits were done according to EACS guidelines (10), and the results were recorded in the patients’ files. Based on EACS guidelines, all patients were routinely tested for aspartate aminotransferase (AST), alanine aminotransferase (ALT), alkaline phosphatase (ALP) and bilirubin levels for HIV diagnosis, quarterly and also in suspicion of liver involvement. Other liver function tests such as serum albumin, blood prothrombin time (PT) and international normalized ratio (INR), hepatitis B, C, A and E markers, Toxoplasma IgM, VCA-IgM, CMV IgM, anti-nuclear, anti-smooth muscle antibodies, antimitochondrial antibodies, and abdominal ultrasonography were evaluated among patients with hepatic involvement. A quantitative non-treponemal VDRL test is routinely performed for initial diagnosis and annual/semiannual basis among the HIV-infected individuals, and also the patients presenting with a clinical syndrome suggest syphilis. Positive VDRL test results were confirmed by a specific syphilis test, Treponema pallidum haemagglutination (TPHA). Diagnosis of syphilis and staging was confirmed in accordance with the Center for Disease Control and Prevention (CDC) sexually transmitted diseases treatment guideline version 2015 (11). Patients’ demographic, clinical, and laboratory data were obtained from follow-up records. Laboratory data included AST, ALT, ALP, and bilirubin levels, VDRL titer, TPHA, CD4+ T lymphocyte counts, HIV RNA level at the time of diagnosis and after treatment. Late presentation was defined as patients who were presenting for care with CD4+ cell count < 350 cells/mm3 or presenting with an AIDS-defining event, regardless of the CD4+ cell count.

Cases of syphilitic hepatitis were identified according to the following criteria: (I) VDRL-confirmed primary or secondary syphilis occurring after or simultaneously diagnosed with HIV infection; (II) elevated liver enzymes, including AST, ALT, and ALP that resolved after penicillin treatment; and (III) exclusion of other causes of hepatitis (viral hepatitis, opportunistic infections, autoimmune hepatitis, alcohol or illicit drug usage, neoplasms, recent consumption of hepatotoxic medications).

Statistical analyses were performed by using the Statistical Package for Social Sciences version 25.0 for Windows (SPSS Inc., Chicago, IL, USA). Descriptive data were presented as mean ± standard deviation (SD), frequency, and percentage values. Categorical variables were compared using the chi-square test and Fisher’s exact test. The normality of continuous variables was tested with the Kolmogorov-Smirnov test. Student’s t-test was used for comparing the normally distributed continuous variables, and Mann-Whitney U-test was used for comparing the continuous variables, which were not normally distributed. The P values less than or equal to 0.05 (P ≤ 0.05) were considered statistically significant.

Nine (6.4%) out of 141 patients had syphilitic hepatitis, and all of them were self-identified MSM. Table 1 shows the laboratory and clinical findings of these patients. None of them had a prior history of syphilis. Moreover, five out of these nine patients were simultaneously diagnosed with syphilis and HIV infection, four out of them were receiving ART for at least two years. None of the patients with syphilitic hepatitis met the criteria for AIDS (CD4+ T cell count < 200/mm3), three of them were late presenters. There was no symptom in one of the patients, and the diagnosis was made with preoperative investigations for gender change.

Table 1. Clinical and Laboratory Findings of the Patients with Syphilitic Hepatitis

The results of serological tests for hepatitis B, C, A and E, Toxoplasma IgM, VCA-IgM, CMV IgM, anti-nuclear, anti-smooth muscle, and antimitochondrial antibodies were negative in all hepatic involved patients, and none of them reported current alcohol or any drug usage. Up to a 10-fold increase in ALT/AST was noted in all of them, and total bilirubin level rose 3.5 times both in two cases (mean ALT: 138.3 ± 112.8 IU/L, mean AST: 75.1 ± 54.4 U/L, mean total bilirubin: 1.4 ± 1.6 mg/dL). The most prominent laboratory abnormality showed up to over 10-fold increase for ALP in all of the patients (mean ALP: 501.4 ± 535.5 U/L). Serum albumin, PT, and INR fell in normal parameters in all hepatitis-involved patients.

All of the nine patients were diagnosed in the early stage of syphilis, and they were unwilling to liver biopsy. They agreed on having a biopsy on the condition that there was no response to the treatment. Hence, they were treated with a single dose of benzathine penicillin. Rapid improvement of clinical and biochemical abnormalities occurred in all hepatitis-involved patients in response to the treatment. Liver enzymes of 4 patients’ were resolved at the end of the first month. At the end of the third month, all patients' liver enzyme levels were in normal ranges.

Table 2. Demographic and Laboratory Characteristics of the Patients According to Syphilitic Hepatitisa

Although hepatitis has been previously described as a rare complication of syphilis in immunocompetent individuals (0.2% to 2.7%) (12, 13), it has been reported more common among People Living with HIV (PLHIV) in recent years (0.9% to 38%) (1, 14-17). In these reports, the prevalence of syphilitic hepatitis in PLHIV seems to be more prevalent in men, particularly MSM. This may be related to direct access of spirochetes to the liver via the portal circulation from the rectal area (14, 15). Therefore, all syphilitic hepatitis patients were MSM in our cohort, and none of them were using condoms as they stated.

Painless chancre at the inoculation site of the organism represents primary syphilis. One in every four untreated patients will develop secondary syphilis characterized by fever, rash, and adenopathy caused by dissemination of spirochetes to mucocutaneous and visceral sites as liver (14). Liver transaminase levels are elevated due to treponemal infiltration in periportal areas as a result of inflammatory response. An elevation of the ALP during secondary syphilis is the main presentation of hepatitis due to pericholangiolar inflammation (1, 14, 18). It has been shown in previous reports that ALP increased more significantly relative to transaminases and bilirubin in patients with syphilitic hepatitis (7, 13). In line with these reports, our patients also had a significant increase in ALP, in contrast to a slight increase in aminotransferase levels. Furthermore, two of the patients had modest hyperbilirubinemia.

In HIV infection, the damage of cytotoxic T cells, macrophages, and CD4+ T cells may decrease the control of syphilis (8, 19). Thereby, high CD4+ cell count may predispose the development of hepatitis during a stronger immune response leading to periportal inflammation (7). Although the median of CD4+ cell count was slightly higher in patients who developed hepatitis among our syphilis coinfected cases, we did not find a significant difference between them. It has also known that early syphilis causes an increase in the HIV RNA level among PLHIV (20, 21). We detected higher HIV RNA levels in our 9 patients with hepatitis, and the reason may be five of them were recently diagnosed with HIV infection, so they were not under antiretroviral therapy.

Liver enzyme abnormalities have been a diagnostic challenge in PLHIV. However, syphilis is a condition that can be identified by very simple serological tests. Although the histological examination is the gold standard for the diagnosis of syphilitic hepatitis (24), we preferred to evaluate the response to the treatment before performing a biopsy, partly due to the choice of the patients. All of these patients responded to benzathine penicillin therapy, and their elevation of liver enzymes and symptoms resolved.

The present study shows that the rates of hepatic involvement in HIV-syphilis coinfection were higher in the predominantly MSM population. Therefore, syphilitic hepatitis should be considered in the differential diagnosis of patients presented with an unexplained elevation of liver enzymes, especially in HIV-infected MSM individuals. This approach may help reduce the transmission of HIV as well as syphilis.