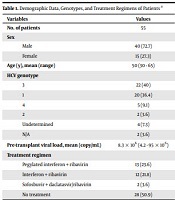 This is the first study that aimed to investigate the clinical course of liver transplantation in patients with hepatitis C in Iran.

This retrospective study was conducted on patients with HCV liver transplantation within five years (2012 - 2017) with the age range of 18 to 65 years at Shiraz Organ Transplant Center. All demographic and clinical data were recorded. Pre-transplant viral load, disease recurrence, graft rejection, and mortality rate were the most important indices in this study.

Among 55 transplant patients, 49% had received hepatitis C treatment before liver transplantation and interferon-based regimens were more prevalent. Besides, HCV genotype 3, followed by genotype 1, was the most prevalent one. A liver biopsy was performed in patients with elevated liver enzyme levels. The numbers of patients with HCV recurrence at 2, 6, 12, and 24-month intervals were three, two, zero, and two patients, respectively. At these time intervals, eight, eight, one, and three cases of acute graft rejection were found, respectively. Eight patients died with a one-year survival rate of 85%. Sepsis and infectious complications were the most leading causes of death.

This study is the first study of liver transplant patients with hepatitis C in Iran. In the five-year study period, rapid development was made in the treatment of HCV patients. It led to the introduction of DAAs, which replaced interferon-based therapies. The results of this study indicated the high success rate of liver transplantation in patients with hepatitis C in Iran. The results of this study could be used to compare the efficacy of DAAs in future research.

Hepatitis C virus (HCV) has been a constant burden for global health and is one of the main causes of end-stage liver disease and indication for liver transplantation with public health impacts affecting three to five million persons in the United States and about 71 million persons worldwide (1, 2). Despite advances and developments in the era of effective antiviral therapy, it is believed that HCV and its complications will remain as one of the main indications for liver transplants (3, 4).

Early HCV is clinically mild and usually unrecognized and is frequently undiagnosed. Six months after the persistence of HCV viremia, the infection is defined as being chronic, which happens in about 80% of the patients. Chronic hepatitis C will progress and may lead to cirrhosis and its complications such as Hepatocellular Carcinoma (HCC), portal hypertension, liver decompensation, and failure in approximately 10 - 20% of the patients (5, 6). Significant morbidity and mortality are associated with chronic hepatitis C virus infection due to complications of liver cirrhosis and hepatocellular carcinoma (1).

Recurrence of HCV in a transplanted liver usually occurs in a few years and leads to graft failure. Therefore, treatment of HCV patients before transplantation has beneficial effects. Therapy based on pegylated interferon has been completely replaced with direct-acting antiviral drugs (DAAs) in the era of HCV treatment in pre- and post-transplantation (7). Protease inhibitors were the first-generation DAAs available to treat HCV infection. Other rapidly evolving treatments include nucleos (t) ide polymerase inhibitors, non-nucleoside polymerase inhibitors, and NS5A inhibitors. More than 90% of current therapies for HCV with oral direct-acting antiviral agents are associated with high rates of sustained virologic response (SVR), which has reduced the risk of liver cirrhosis, hepatic decompensation, need for liver transplantation, and both liver-related and all-cause mortality associated with SVR (8, 9). A meta-analysis by Rezaee-Zavareh et al. revealed that DAA therapy has near 90% SVR in the post-transplant treatment of HCV patients, and interferon-based therapy could be replaced by DAA-based treatments (10).

The present study is the first study to evaluate the clinical course of hepatitis C with an emphasis on important aspects of liver transplant such as pre-transplant HCV treatment status, disease recurrence, graft rejection, and mortality rate among a large number of Iranian patients with liver transplantation.

This retrospective cohort study was conducted in adult HCV-positive patients (18 - 65-years-old) at Shiraz Organ Transplant Center, Shiraz, Iran. Sampling and evaluation of evidence were done on adult patients with HCV cirrhosis and liver transplantation over five years from August 2012 to August 2017. Demographic data of all eligible patients including age, gender, date and cause of transplantation, and duration of hospital stay (before and after transplantation) were recorded. Other variables included HCV genotype, need for re-transplant or re-operation and dialysis or continuous renal replacement therapy (CRRT), acute and chronic rejection in the first year, immunosuppressive medications, antiviral medications, and HCV recurrence. Exclusion criteria were patients’ unwillingness to participate and confirmation of other diagnoses rather than HCV infection.

Due to the timeframe of this study, interferon and ribavirin-based regimens, as well as interferon-free regimens [NS5A inhibitors and nucleot (s) ide polymerase inhibitors (NPIs)] were included in this study. Patients who did not receive antiviral treatment for any reason were also included in the study.

Tacrolimus, prednisolone, and mycophenolate mofetil were used as a cornerstone of immunosuppressive therapy. The primary dose of mycophenolate mofetil was 1000 mg daily in divided doses. The tacrolimus dose was adjusted by trough level and prednisolone treatment started at 20 mg daily with dose reduction to achieve minimum dose requirement based on transplanted liver function. Cyclosporine, everolimus, and sirolimus were used as alternative options. Patients were meticulously monitored for side effects and drug interaction.

Statistical Package for the Social Sciences (SPSS) software (Version 18.0; SPSS Inc. Chicago, IL, USA) was used for data analysis. A t test was used to compare the means, and a P value < 0.05 was considered significant. Descriptive tests were used and data were presented as mean values or frequency percentages.

The study protocol was approved by the Ethics Committee of Shiraz University of Medical Sciences (IR.SUMS.REC. 1396. s167).

Fifty-five patients (40 males and 15 females) with a mean age of 50 years (30 - 65-years-old) were enrolled in this study. Age distribution had no statistically significant difference between males and females (P value = 0.2). Genotype 1 was the most prevalent genotype, followed by genotype 3 (Table 1).

Table 1. Demographic Data, Genotypes, and Treatment Regimens of Patients a

The frequency of acute and chronic rejection, which all were proved by biopsy and pathological evidence of HCV recurrence in the first month, 6th, 12th, and 24th months post-transplant, is shown in Table 2. Among 17 cases with acute cellular rejection, 14 cases had mild, two cases had moderate, and one case had severe rejection. Seven patients had evidence of HCV recurrence, confirmed by PCR study, only one of whom had mild acute cellular rejection. Among patients with HCV recurrence, four patients were treatment-naïve, two patients were treated with pegylated interferon plus ribavirin, and one patient was treated with conventional interferon plus ribavirin. During the follow-up period, eight patients died. The most prevalent cause of death was severe infection and sepsis. Table 3 demonstrates the cause and time intervals of death among patients.

Currently, 1.5% of the population in the United States, accounting for about 3.5 million people, suffer from chronic HCV and the annual mortality from this disease is 15,000 (13). Acute hepatitis occurs in 20% of patients within two weeks after infection with HCV and it becomes chronic in the majority of the patients. Often, patients with chronic hepatitis do not show specific symptoms but may develop liver cirrhosis, hepatocellular carcinoma, and liver failure over time (14).

In recent years, there has been rapid progress in the treatment of HCV patients. Interferon-based therapies have already been replaced by direct-acting antiviral (DAA) therapies. Direct-acting antivirals include protease inhibitors, nucleos (t) ide polymerase inhibitors (NS5B polymerase blockers), non-nucleoside polymerase inhibitors, and NS5A inhibitors. In some patients, liver transplantation is the only choice of treatment and about 30% of liver transplantations encompass these groups of patients. However, in transplant patients, the recurrence of the virus usually occurs within five years (10, 15). To prevent disease recurrence in the allograft and increase the survival of the patients, it is suggested that treatment of HCV infection be performed before liver transplantation. The choice of therapy depends on the viral genotype, history of previous treatment, and degree of cirrhosis and hepatic dysfunction.

In the current study, the clinical course of HCV patients receiving liver transplantation at Shiraz Organ Transplant center, Shiraz, Iran, was investigated. At the start of this study, the transition from an interferon-based regimen to a non-interferon-based regimen (DAAs) had just evolved and there was little experience with DAAs. Therefore, different medications were administered. Interferon PEG plus ribavirin and regular interferon plus ribavirin were most commonly administered. In 50% of the patients, no medicine was given before transplantation. These results can be used for future studies to be compared with DAAs in HCV pre-transplant patients.

We performed liver biopsy in patients with elevated liver enzymes to assess the possibility of acute and chronic rejection and identify recurrent hepatitis. Routine liver biopsy in post-transplant HCV patients was not performed without a rise in liver enzymes. Abe et al. (2017) reported that although liver biopsy is routinely used as an indicator of the recurrence of hepatitis C post-transplantation and for following the course of antiviral therapy, the development of DAAs has eliminated the need for liver biopsy after transplant (20). According to our results, three cases of HCV recurrence were seen in the first month of transplantation, and in the six-month period, two patients had recurrent disease. However, at six and 12-month intervals, no new case of HCV recurrence was confirmed. Generally, the chance of recurrence is high in HCV patients after liver transplantation and after disease recurrence, most patients develop cirrhosis within five years, and thus, the survival rate diminishes (21, 22).

There is no consensus on the exact timing of DAAs administration after liver transplantation. In a review article by Lens et al. (2015), it has been recommended that interferon-based therapy should not be commenced immediately after transplantation because patients are receiving high doses of immunosuppressant and other surgery-related medicines, but there is probably less concern while using DAA therapies (23). On the other hand, delaying treatment increased the likelihood of disease recurrence. Fagiuoli et al. reported that older age, suppressed immune system, HCV genotype 1, and high viral load are among the factors responsible for the risk and severity of hepatitis C recurrence following transplantation (24). The decision to start treatment is made for each individual patient. The optimum time to start treatment is in the first three months after transplantation when there is a very low risk of recurrence. In contrast to this opinion, our results suggested that the risk of disease recurrence is not low as it is considered in the early months after transplantation.

Eight out of 55 patients died and the one-year survival rate was about 85%. The result is similar to the result obtained among a large number of HCV-positive transplant patients in Canada (21). Also, our result is similar to another study by Malek Hosseini et al. who reported that 85 and 81% survival rate for one and five-year intervals, respectively, among 3,191 liver transplant patients in Shiraz Transplant Center in Shiraz, Iran (27). According to our results, severe infection and sepsis were the main causes of death in patients, followed by primary graft non-function, secondary malignancy, and myocardial infarction. Infectious complications are the main causes of mortality among liver transplant patients. Research on a large number of liver transplant patients (near 65,000 patients) by Baganate et al. showed that the most common cause of death in the first six months after transplantation was infectious complications (28). In one study, Hsiao et al. reported a 2% prevalence of malignancy in patients after liver transplantation (29). In a study by Dorado et al., 10 out of 851 patients (1.2%) died as a result of the lymphoproliferative disease. The number of patients and duration of the follow-up period were two limitations of our study, and a 10-year follow-up period would help determine long-term outcomes and complications.

Taken together, the current study is the first study from Iran aimed at following the clinical course of hepatitis C patients receiving liver transplants using clinical and paraclinical criteria. The results demonstrated a favorable outcome of patients regarding survival, rejection, and recurrence of hepatitis. Also, given the rapid advances in DAAs therapy, the results of this study could be used as a basis for future research on the effects of DAA treatment in post-transplant hepatitis C patients.