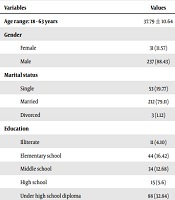 The Seroprevalence of Hepatitis A Virus (HAV) Among Blood Donors Presenting to the Iranian Blood Transfusion Organization in Sanandaj, Iran

Hepatitis A virus (HAV) infection is endemic in Iran. Detection of the seroprevalence of HAV is necessary to evaluate the feasibility of infection control strategies in the population.

This study aimed to determine the seroprevalence of HAV among blood donors as a representative sample of the general population.

In this cross-sectional study, 268 blood samples were randomly selected from donors, presenting to the Iranian Blood Transfusion Organization in Sanandaj, Iran, in 2019. The collected sera were measured for anti-HAV antibodies (IgG and IgM), using ELISA assays. Also, demographic data, including age, gender, marital status, education, occupation, and blood donation status, were collected. The test results and demographic data were analyzed in STATA software.

A large proportion of blood donors had anti-HAV antibodies and were immune to HAV infection. Therefore, HAV was endemic in the study area.

Hepatitis A virus (HAV) infection is the most common form of acute viral hepatitis in the world. The incidence and prevalence of this infection are highly correlated with low socioeconomic and health indices (1). HAV contains a positive single-stranded RNA in the capsid without an envelope. This virus belongs to the genus Hepatovirus and the family Picornaviridae. HAV only contains one serotype, which is transmitted through direct contact with an infected person or by ingestion of contaminated water and food; the incubation period is about one month. HAV proliferates in liver cells, disrupts the liver function, and induces an immune response and an inflammatory process in the liver. This virus is excreted through the stool and can contaminate drinking water and food. Fecal shedding mostly occurs late in the incubation period, a few days before the emergence of clinical signs.

The majority of patients with HAV infection fully recover, and the fatality rate is reportedly low, without any comorbid chronic liver diseases. Also, these individuals usually acquire lifetime immunity (1). In developing countries, HAV infection occurs in childhood. The clinical signs of acute infections are usually milder, non-specific, or even asymptomatic and may remain undiagnosed due to the absence of jaundice. In children, viral shedding persists for a long time, while in adults, the virus causes acute infections with mild symptoms or may result in serious complications (1).

Around 1.5 million symptomatic HAV cases are reported each year worldwide (2). In recent decades, the prevalence of HAV infection has declined following the improvement of sanitation behaviors, especially water and food hygiene, besides the availability of HAV vaccines. On the other hand, the reduced infection rate has significantly increased the average age of infection. In other words, late exposure to the virus in adults may make this population significantly susceptible to the infection and increase the risk of HAV outbreak. Since the severity of HAV infection increases with age, it is appropriate to implement vaccination programs, especially among children, to reduce the risks in populations, including susceptible adults.

Detection of HAV seroprevalence is essential for evaluating the appropriateness of an infection control strategy in a population (1). According to the World Health Organization (WHO), HAV infection is endemic in Iran (3). Recent studies have shown that the seroprevalence of HAV is declining in some provinces of Iran and that today, the country can be considered as a low endemic area for HAV (4). Nonetheless, HAV vaccination has not been incorporated in Iran’s routine vaccination program.

Generally, the blood donor community can represent an accessible and practical sample of the general population for evaluating the seroepidemiology of HAV infection (2). Since routine blood donations are not monitored for HAV, there is no information on the seroprevalence of HAV in Iranian blood donors, especially in the West of Iran.

This study aimed to determine the seroprevalence of HAV among blood donors in Sanandaj, Kurdistan Province, Iran.

In this cross-sectional study, 268 blood donors, presenting to the Kurdistan Division of Iranian Blood Transfusion Organization (IBTO) in Sanandaj, Iran, were randomly selected. The participants gave their consent to participate in the study. Specimens were collected after performing routine tests at the IBTO on the donors’ blood. The clotted blood was centrifuged at 3000 rpm for 15 minutes, and the sera were separated in new tubes and stored in a freezer at -20°C.

Moreover, data, including age, gender, marital status, education, occupation, and blood donor status, were collected in this study. The blood donors’ information was kept confidential. The present study was approved by the Kurdistan University of Medical Sciences (proposal and ethics code: IR.MUK.REC.1396/272).

The results of ELISA assay and demographic data were entered in STATA version 14.0 and analyzed. P-values less than 0.05 were considered statistically significant.

Analysis of the relationship between occupation and anti-HAV status showed that most positive cases were in the group of farmers and ranchers (14 out of 15; 93.33%), while the lowest rate of positivity was found in the unemployed (19 out of 31; 61.29%); the relationship between these two variables was statistically significant (P = 0.045). Among three groups of first-time, lapsed, and regular blood donors, the prevalence of anti-HAV antibodies was estimated at 82.69%, 82.43%, and 80.28%, respectively. However, there was no significant relationship between the donor status and HAV antibody results (P = 0.893) (Table 2).

Table 2. The Status of Anti-HAV Antibodies with Regard to the Demographic Data of Blood Donors Presenting to the Iranian Blood Transfusion Organization (IBTO) in Sanandaj, Kurdistan, Irana

In the present study, the prevalence of total anti-HAV antibodies (IgG and IgM) was 81.34% among blood donors; this indicates that HAV is prevalent in the study area. The antibody positivity was correlated with age and marital status. A high seroprevalence of HAV was also reported among men. However, there was no significant association between HAV seropositivity and gender. The high seroprevalence of anti-HAV antibodies was found in the illiterate group (n = 10, 90.91%). The majority of anti-HAV positive cases were farmers and ranchers (93.33%).

Furthermore, in a cross-sectional study conducted in different provinces of Iran (2009 - 2010), the serum samples of 10- to 18-year-old adolescents were examined for anti-HAV antibodies. A total of 2,494 samples were selected from 16 provinces by multistage random cluster sampling. The weighted seroprevalence of HAV varied across provinces, ranging from 50.43% in Fars to 78.81% in Markazi. Symptomatic HAV infections were seen among adolescents in all provinces of Iran (6). Also, in a cross-sectional study in 2013, a total of 501 serum samples were selected using multistage cluster sampling and evaluated for anti-HAV IgG antibodies in Shahrekord (Center of Chaharmahal and Bakhtiari Province) in southwest of Iran. The seroprevalence of HAV was estimated at 90.8% (11).

Additionally, in a cross-sectional study, an anti-HAV antibody (IgG) was evaluated among people referred to healthcare centers for laboratory tests before marriage in Fars Province, south of Iran (2008 - 2009). Out of 1050 people, 88.2% were positive for anti-HAV antibodies. The seroprevalence of HAV increased with age (79.3% in individuals aged < 20 years, 91.3% in individuals aged 20 - 30 years, and 99% in individuals aged > 30 years). Also, the findings showed that 85.1% of people living in urban areas and 95.9% of people living in rural areas were positive for anti-HAV IgG. The seroprevalence of HAV was associated with the family members of the individuals (13).

Moreover, another study was conducted among blood donors, referred to Tehran IBTO in 2014. The mean age of the donors was 38 years, and 95.9% of them were male. Out of 559 blood donors, 19.1% were first-time donors, 29.2% were lapsed donors, and 51.7% were regular donors. The seroprevalence of HAV was 70.7% and increased with age. There was no significant difference between genders in terms of the HAV seroprevalence. Donors with higher levels of education had a significantly lower HAV seroprevalence. However, the seroprevalence of HAV was significantly higher in regular and lapsed donors as compared to first-time donors (2).

The blood donor community can represent an easy, accessible, and practical sample of the general population for evaluating the seroepidemiology of HAV. Consistent with earlier studies that evaluated the seroprevalence of HAV in the general population and blood donors, the results of the present study are somewhat in line with the literature. The differences between the results might be due to variations in the population, age, sample size, and sensitivity and specificity of ELISA assay. In the present study, the seropositivity of anti-HAV antibodies was significantly correlated with the age, occupation, and marital status of blood donors. In the present study, we could not determine the seroprevalence of HAV among people aged < 18 years and > 63 years. Also, we could not separately detect anti-HAV IgM antibodies as indicators of recent infection.

A high percentage of blood donors in the present study had HAV antibodies and were immune to HAV infection. Generally, HAV was found to be endemic in the study area.

We would like to thank the IBTO in Sanadaj, Kurdistan, Iran for blood sampling, providing the blood donors' data, and performing ELISA assays.

Copyright © 2020, Author(s). This is an open-access article distributed under the terms of the Creative Commons Attribution-NonCommercial 4.0 International License (http://creativecommons.org/licenses/by-nc/4.0/) which permits copy and redistribute the material just in noncommercial usages, provided the original work is properly cited.
download pdf 119.04 KB Get Permission (article level) Import into EndNote Import into BibTex
Number of Comments: 0