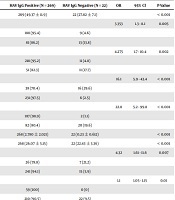 Immunoglobulin G Immunity to Hepatitis A Virus in Liver Transplant Candidates: A Serosurvey from Iran

Becoming infected with hepatitis A virus (HAV) is deadlier in patients with end-stage liver disease.

This study aimed to determine the seroprevalence of chronic immunity to HAV in liver transplant (LT) candidates to determine whether HAV vaccination is necessary for them or not.

This cross-sectional study was conducted on adult LT candidates who were referred to the LT center of Shiraz, Iran. The patients were interviewed for filling the data collection forms. These forms consisted of demographic information, medical backgrounds, etiology of chronic liver disease, a model for end-stage liver disease (MELD) score, laboratory findings, and abdominal sonography report. Furthermore, a 3-cc blood sample was obtained from each patient, and anti-HAV IgG was detected by Enzyme-linked Immunosorbent assay (ELISA) using standard Diapro kits. Univariable and multivariable data analyses were performed using SPSS version 20. A P-value of less than 0.05 was considered the significant cutoff in regression analysis.

Hepatitis A virus (HAV) infection is a vaccine-preventable disease transmitted via the fecal-oral route (1). The symptoms of HAV include fever, malaise, loss of appetite, nausea, abdominal discomfort, dark-colored urine, diarrhea, and jaundice (1). Hepatitis A virus is estimated to infect over 100 million people and kill 15,000 to 30,000 ones around the world each year (2). According to the global report by the World Health Organization (WHO) in 2010, Iran was categorized among countries with an intermediate level of anti-HAV seroprevalence (3). However, a recent nation-wide study showed that Iran has changed from an intermediate level to a low level of HAV immunity (4). Hepatitis A virus causes a higher mortality rate in adults than in children (5, 6). Moreover, the risk of becoming infected with HAV and then dying from the infection is much higher in patients with chronic liver diseases, including liver transplant candidates (7, 8). Based on previous studies, HAV can also be transmitted through transplanted organs and blood transfusions (9, 10). This transmission can lead to conditions that mimic the symptoms of transplant rejection while being undetectable for a long time (10). Furthermore, immunity against HAV in transplant recipients can be lost (11, 12). Although anti-HAV vaccines are less effective in people with chronic liver diseases, vaccination has been recommended to prevent complications following this infection (7).

To the best of our knowledge, no study has been conducted on HAV immunity in LT candidates in Iran. Therefore, we carried out this study to determine the seroprevalence of HAV immunity in these patients.

This cross-sectional study was carried out in Shiraz, which is the first and main center of LT in Iran (13). The target population was patients aged ≥ 18 with End-stage Liver Disease (ESLD) who became candidates for LT by the liver transplantation team of Shiraz University of Medical Sciences (SUMS).

The sample size was calculated as 260 using the Cochran formula while considering the prevalence of 96.5% of HAV immunity in patients with ESLD (14), confidence interval of 95%, error of 5%, design effect of 2, a breakout of 25%, and gender difference. There were no exclusion criteria, except for non-willingness to participate in this study. We used a convenient type (census) of patient recruitment in this study due to logistic difficulties in access to the patients. A three-person team, including a physician, a health technician, and a laboratory expert, gathered the data from all patients within five months. First, the patients were interviewed, and a data collection form was filled for each patient, including demographic information, medical history, etiology of chronic liver disease, baseline model for end-stage liver disease (MELD) score, and baseline laboratory and abdominal sonography findings. Body weight and height were also measured by standard scales. Moreover, a 3-cc blood sample was obtained from each patient and centrifuged. The blood serum was separated and collected in two coded microtubes. Then, the samples were transferred to the SUMS-affiliated Gastroenterology Research Laboratory while maintaining a cold chain. In the laboratory, anti-HAV immunoglobulin G (IgG) was detected by Enzyme-linked Immunosorbent Assay (ELISA) method using standard Diapro kits (15). The protocol was approved by the laboratory of the School of Public Health affiliated with Tehran University of Medical Sciences, Iran. For external quality control, 10 samples were selected randomly and sent to the Virology Research Laboratory of Shiraz Paramedical School that showed no difference between the results.

The data were analyzed by IBM SPSS statistics software package version 20. Then, the accuracy of the data entered into the software was randomly checked with data-gathering forms. For univariable analysis, a t-test and a chi-square test were used. Then, significant variables were selected and included in the multivariable logistic regression test (Forward-Wald). A P-value of less than 0.05 was considered significant in the final analysis.

The proposal of this study was approved by the Ethics Committee of Shiraz University of Medical Sciences (reference number: IR.SUMS.MED.REC.1398.588). Also, we considered the ethical principles of the Helsinki Declaration for medical research in this study (16). All participants were informed sufficiently about the study’s purposes and processes, as well as their rights. We obtained a signed consent form from each voluntary participant.

Our study showed that 9 out of 10 LT candidates had IgG immunity against HAV. Because the HAV vaccination is not included in the immunization program of Iran, it can be concluded that all immune cases were acquired immunity due to past natural exposure to HAV. Furthermore, patients with higher knowledge of transmission routes of HAV, waterpipe smokers, and younger patients had less immunity against HAV compared to the counterpart groups.

Overall, millions of people are infected with HAV, while thousands of them die because of insufficient immunity against it (2). The virus causes higher rates of morbidity and mortality in patients with chronic liver disease (7). Therefore, not only patients with ESLD but also those who are candidates for LT are at risk of high mortality (7, 8). Even after LT, this virus can cause complications for these patients (11). The prevalence of immunity against HAV in our study was the same as those in previous studies in Iran, which showed that more than 90% of patients with chronic liver disease had immunity against HAV (14, 17), while the level of HAV immunity in the general population of Iran was far less than the above rate (50% - 70%) (3-5).

This study showed that age had a significant direct association with HAV immunity. This finding is consistent with the studies by Shavakhi et al. (14), Cho et al. (18), and Helmy et al. (19), which similarly found more immunity among older ones. Furthermore, the lower level of knowledge of transmission routes of HAV was correlated directly with immunity against HAV, which was in contrast to a study conducted by Lankarani et al. in the general population (4). We also found a significant association between waterpipe smoking and less immunity against HAV. To the best of our knowledge, there is no study that investigated the association between hookah smoking and HAV immunity. Cho et al. (18) found that female patients with chronic liver disease were more immune to HAV than male patients. This finding was in contrast to our study that found no relationship between gender and HAV immunity. Moreover, our findings showed that the lower level of education was correlated directly with the positive result of the HAV IgG test, which is similar to a study by Lankarani et al. (4) in the general population. According to the univariable analysis, we found a direct association between immunity against HAV and obesity. Some researchers found an increased risk of getting infections (e.g., influenza) in more obese patients (20); however, no study was found that shows the relationship between obesity and HAV immunity. Ferreira et al. (21) remarked in their study that HAV immunity was correlated inversely with the level of income; however, we did not find such an association. In line with Shavakhi et al.’s study (14), we did not find any correlation between HAV immunity and urban or rural living areas.

As a limitation of this study, we could not find studies with a similar topic for comparison in LT candidates. Also, we had no access to the HAV immunity status in the prior stage of ESLD development in those patients who were not immune to HAV. Therefore, we could not define any possible change in their HAV immunity over time. If we knew that, this could help to define the benefit of HAV vaccination for them. Therefore, the periodic monitoring of HAV immunity in LT candidates even after LT is recommended.

In conclusion, according to the high seroprevalence of anti-HAV IgG in LT candidates, it is not required that all of these patients become vaccinated against HAV; however, due to the growing number of LT candidates and high mortality of HAV in non-immune adults, it is suggested that all of these patients be checked for anti-HAV IgG for considering HAV vaccination in non-immune groups, especially young and waterpipe smoker patients.

The authors would like to thank all LT candidates, and their accompanies who participated in this study and answered honestly to our questions.